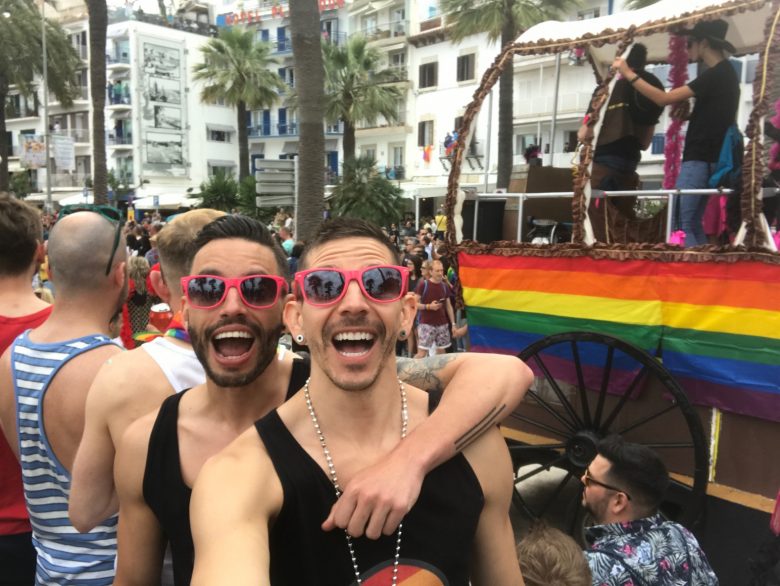 At the beginning of the XX century, Sitges was one of the most dynamic towns along the Catalan coast. Some popular painters were born in Sitges, magnificent Villas were built there by a very talented generation of modernist architects, and poets were inspired by its beautiful landscape. Such a lively town had also a privileged asset: it was very close to the busy Barcelona.

Barcelona received a lot of homosexuals from other parts of Spain, attracted by a city more tolerant and open minded than their ones. Many of them, during the 60s and 70s, started to choose Sitges to live in. As a result, the Mediterranean town hosted a lot of gay venues, modern nightclubs and bars with cabaret. A lot of those gay bars in Sitges remain open, while new gay bars have arrived to the town. We have listed some of the most popular ones.

One of the most popular gay bars in Sitges, Comodín’s Drag Queen shows date back to the 60s. The venue offers varied shows thanks to different artists who perform in Comodin’s stage all along the year. It also organises several theme parties, among which the Fiesta de la Mantilla is one of the funniest. Comodín is such an institution in Sitges that even the Spanish public television (TVE) filmed a reportage about it.

After a long day in the beach during a hot summer day, there is nothing better than heading to the Parrot’s terrace and enjoy a freezing cocktail or a cold beer. Parrots is they gay bar in Sitges where is more difficult to find an available table in the terrace. After their sunbathes, many gay tourists walk from to the beach to their hotels, and they usually pass by the Carrer del Pecat (literally Sin’s Street) where Parrots has its terrace. It becomes the pedestrians streets becomes some sort of a catwalk where many hot guys present their fit bodies and their tight swimming trunks.

It was known before as Bar Azul and it is one of the first gay bars in Sitges. However, Bar Code still keeps its charm, after so many years. With all-time videoclips and pop hits, this venue has a nice atmosphere. Besides, it has a perfect location and a very convenient happy hour. With all this assets, it is definitely one of the bests bars to start a night out.

In the Casablanca bar every singles corner, furniture or decoration is stylish and plenty of personality. This venue opts for a different style: while others choose pop and house hits, Casablanca prefers Jazz. Played at a low volume, this genre helps creating a relaxing atmosphere. Thanks to this, Casablanca is the gay bar in Sitges where to chill while having a chat with friends, or a romantic date, while drinking a glass of wine (they have a great wine selection). They even organise theme parties, so keep an eye on its website.

It is a small bar but it is a must among the huge offer of gay bars in Sitges. Queenz has one of the best vibes of the town, and counts with a very diverse audience. It has also a Drag Queen restaurant and quite a good reputation: apparently they serve excellent meals, and waiters are extremely nice.

El Horno is one of the coziest gay bars in Sitges, that’s why it is also busy. It is also one of the earliest venues to open in the evening. It looks similar to a tavern and it has become a popular meeting point for the Bear community. Pay attention to the collection of Teddy Bears.