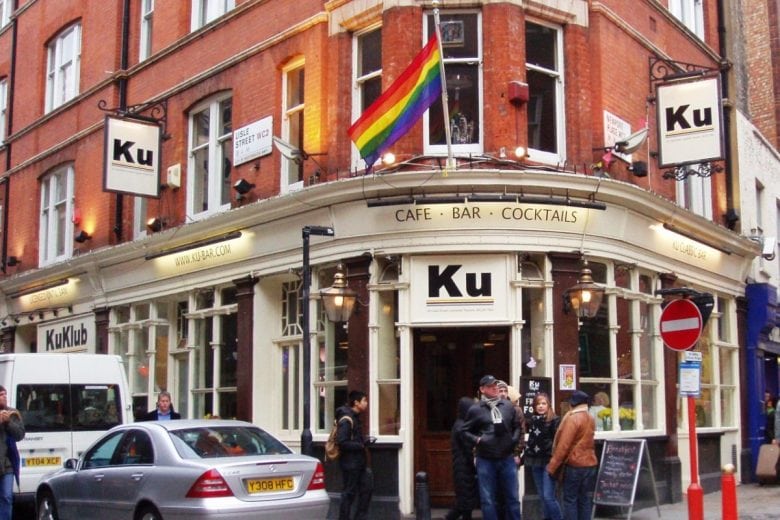 London is the most visited city in Europe, with over 15 million visitors every year. You just need to go to Camden, Notting Hill, Covent Garden or Hyde Park to find out how popular the British capital is. The Soho neighborhood is not an exception, it is even one of the tourists’ favorite places. The gay area has adapted to it and many of the gay bars in London share the streets with Deli shops, high standard restaurants and five-star hotels. However, the saturation of the city center has boosted the rise of new gay areas around the city.

Nowadays, the gay bars of London are not only in Soho. Finally, the trendiest neighborhoods of the capital, Shoreditch and Dalston, are getting relevant in the local gay life. Vauxhall has become a hotspot thanks to its nightclubs. Clapham hosts a considerable gay community that attends to cozy gay bars and clubs in the main street… The huge amount of bars and the variety among them conform to a whole universe. In this guide, you will find our top 6 Gay bars in London!

THE DUKE OF WELLINGTON

Among the gay bars in London, the Duke of Wellington is one of the most crowded. In fact, during the summer you could not say if there are more people inside this pub or outside having a pint. It looks like a traditional English pub, but plenty of gay guys who enjoy loud music chat lively with their friends. The best point of the Duke is its friendly atmosphere, the perfect welcome for gay foreigners who visit London for a weekend or who have recently arrived to the city.

In the heart of the Soho, we find this charming gay bar. It has an open-air patio and two floors, stylishly decorated. In The Yard, they know how to prepare good cocktails, and the customers know how to enjoy a cold drink during the summer days in the patio while chatting to everyone who crosses through it to get to the bar. Socializing is a must!

There is no doubt GAY is one of the youngest gay bars in London. It is not because it has opened recently, but because it is very popular among students and young guys. What is its secret? Affordable drinks and the last music hits to make the youngest move their bodies. It is part of the Heaven group, so you can get discounts easily to continue the party in the popular nightclub.

Ku Bar has two different venues. The one in Chinatown has become very popular because of its fancy decoration, its musical selection (with pop divas on Top) and some of the hottest bartenders you can see around the gay bars in London. It is always busy, so it is hard to get a table, and its popular among foreigners, regardless of age.

Vauxhall has consolidated as one of the main gay hotspots in the city, thanks to its nightclubs, the sauna… and the Vauxhall Tavern! This pub is one of the oldest gay bars in London, with a very friendly and always popular atmosphere. It is particularly entertaining when they celebrate the Bingo night, hosted by a Drag Queen.

Dalston SuperStore has become one of the coolest neighborhoods in the city. And it usually happens that when a place is cool and trendy there is a gay bar around. It has two floors that have nothing in common but the entrance. The ground floor is lively decorated, plenty of colorful lights, indie music and a hipster hint. While downstairs everything is dark, with black painted walls and DJ sessions. The two floors combined have turned the Superstore one of the trendiest gay bars in London at the moment.