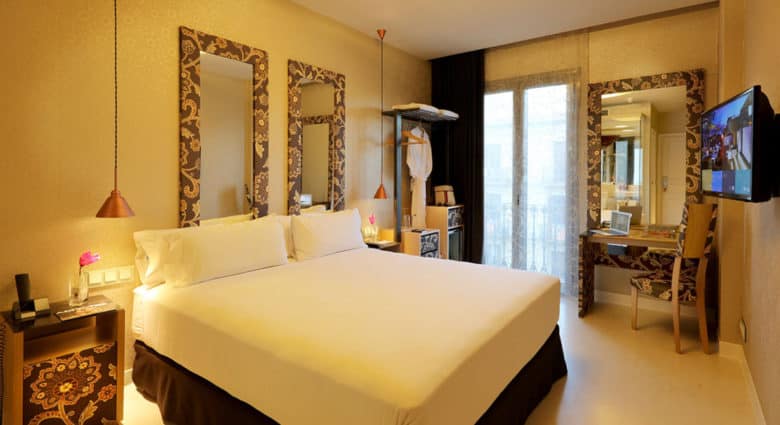 Barcelona needs little introduction and it’s one of the most popular destinations in all of Europe. With year-round mild temperatures, a seaside location and a welcoming atmosphere for LGBT people, it’s no wonder that gay travelers from around the world come here to indulge in the culture, nightlife and vibrant atmosphere. If the warm weather and seaside location isn’t enough, its stunning architecture and welcoming gay scene will keep you coming back for more.

Choosing where to stay in Barcelona is an important decision you make when planning your trip. The options are limitless, and your choice ranges from large hotel chains to small, boutique hotels or apartment rentals. You can also find gay-owned hotels in Barcelona or even a hotel chain like Axel Hotels, which is designed for the LGBT community.

While staying at a gay hotel might not be the preference for everyone, some travelers enjoy the open environment that Axel Hotel Barcelona offers where you can simply relax and be yourself. It’s true there are many gay-friendly hotels in Barcelona that are not necessarily gay-themed or designed for the LGBT community, but those properties simply can’t provide the same type of unique experience offered by Axel Hotel Barcelona. 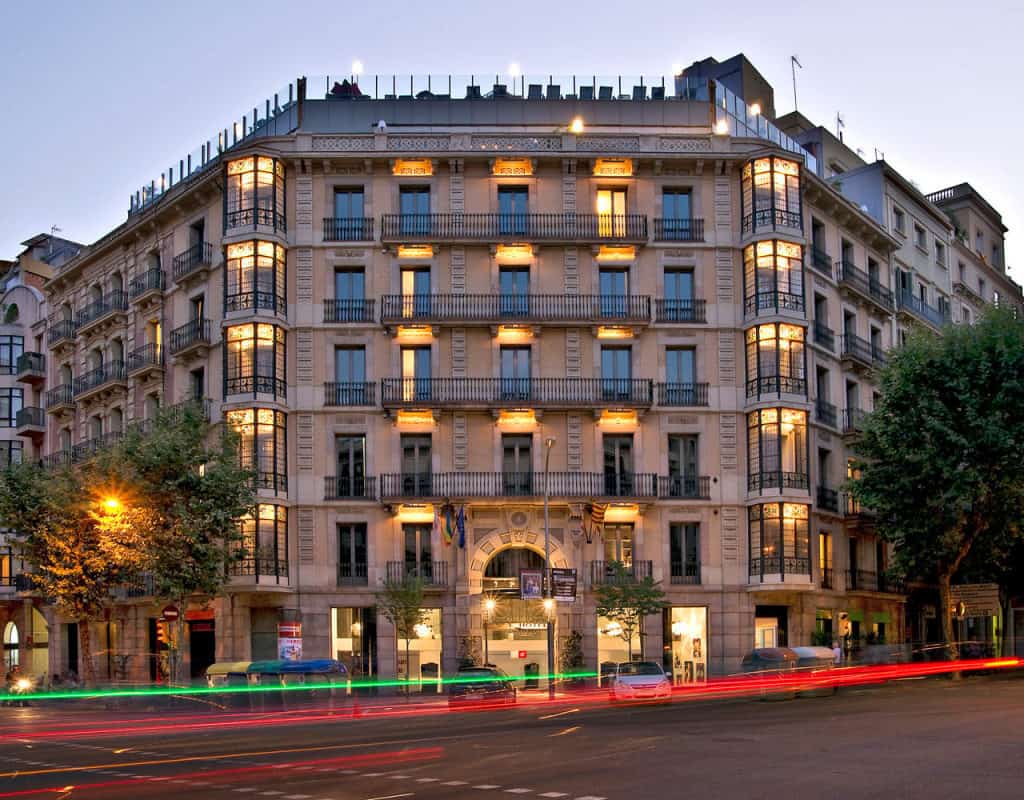 Axel Hotels was founded in 2003 and is really the only major gay hotel chain in the world. Their hotels are mostly located in Europe, but they recently expanded to the US, and will soon expand to Portugal, Cuba and beyond.

The Axel Hotel vision is to offer a hotel aimed at the LGBT+ community. The spaces are cosmopolitan with a tolerant environment where diversity and respect are valued. The philosophy is a hotel chain for the entire LGBT+ community where two men, two women, a man and a woman or any type of customers are equally welcome, without prejudice to their sexual orientation. Axel Hotels is designed for the LGBT+ audience but is opened to everyone. In fact, Axel Hotels doesn’t define itself exactly as a gay hotel per se, but rather heterofriendly.

Check out our listings below of all the Axel Hotel locations in the US, Spain, Germany and Italy.

What Can You Expect if You Stay at an Axel Hotel?

Axel Hotels are properties where any guest, gay or straight is welcome to stay, but with the concept of offering a space designed for the LGBT community. You could bring a straight friend or even your grandma to one of these properties and you wouldn’t feel awkward. The concept is simply to create a welcoming environment for LGBT guests. Axel Hotels is gay owned and operated and they promote respect and diversity, have non-discrimination policies as well as offer sensitivity training for their staff. 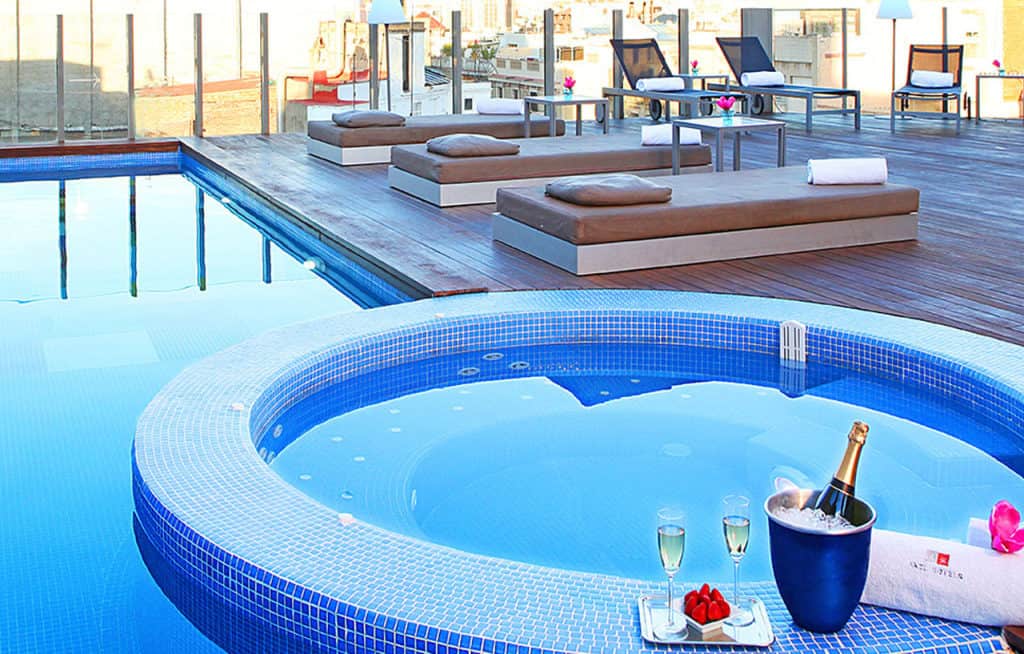 Axel Hotels currently has 2 properties in Barcelona. If you’re visiting the city during gay pride, a popular gay event or before or after a gay cruise, rooms at Axel Hotel Barcelona and Two Hotel Barcelona by Axel get booked well in advance, so you’ll need to plan ahead. Axel Hotels are a great option if you’re traveling with your same-sex partner and you won’t have any issues with public displays of affection.

Barcelona is home to the first location which was opened in 2003. The property is located in the Eixample gay neighborhood, has 101 rooms and is one of our favorites, particularly the rooftop terrace. The hotel also has a gym as well as bar and restaurant on the ground floor. Axel Hotel Barcelona hosts a variety of events throughout the year, particularly in the summer months, which is high season for Barcelona.

TWO Hotel Barcelona by Axel is the second property in the city and was opened in 2015. It’s also located in Eixample, Barcelona’s gay neighborhood. It has 87 rooms, a rooftop terrace with pool, gym as well as a bar and restaurant. The hotel rooms have been specially designed, equipped and decorated to create a modern and elegant environment with maximum comfort.

We’ve stayed at Axel Hotel Barcelona several times and really enjoyed our stay. We really enjoy their rooftop terrace called the SkyBar, which has a nice pool, jacuzzi and bar. The views from the terrace are great and it’s a wonderful place to sit out by the pool in the afternoon or sip cocktails in the evening. Every stay we’ve had at Axel Hotels has been enjoyable and the staff is always friendly and helpful. It’s usually quite easy to socialize with and meet other guests, which is great when you’re visiting a new city. The location is perfect, right in the gay neighborhood of Eixample and it’s well connected to other parts of the city. The rooms are a decent size and many have a private terrace or balcony.

Ready to Book Your Stay at Axel Hotel Barcelona?

Interested in staying with a gay host in an apartment rental instead of an Axel Hotel?

Next to Axel Hotels, misterb&b is definitely the other major player in the market. Founded in 2014, misterb&b is not a hotel or chain, but rather a booking site for rooms, apartments and homes. Similar to AirBnB, misterb&b is an online service that allows you to rent short- or long-term spaces from gay and gay-friendly hosts around the world. They have hosts in more than 135 countries with more than 200,000 total listings. They recently even started offering listings of gay and gay-friendly hotels on their site for a one-stop shop. You can even list your own room or apartment to earn cash from gay travelers in your city. Understanding a city’s gay scene is much more easily done with the help of a local and apartment sharing is one of the best ways to meet someone living in the city who knows the best insider advice.