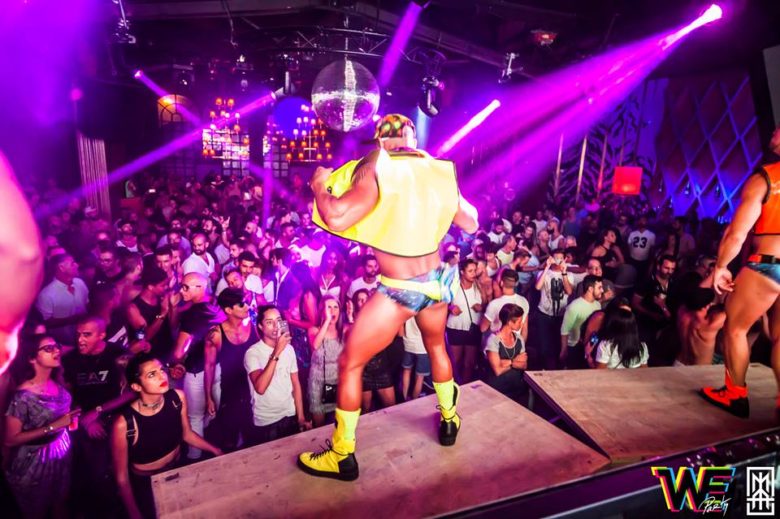 Europe is easily the most tolerant and accepting region in the world and there are many cities across the continent where you can let your true colors shine without fear of judgment or harassment. Places like Amsterdam, Berlin or Barcelona are well known for being gay friendly, tolerant and having a large community of LGBT residents. Still, we think Madrid is perhaps the contender for the number one spot on our list of the best gay destinations in Europe. Certainly, there are a handful of cities that compete for this title, but with the mix of its size, gay scene, events and overall vibe, we’d argue to say that Madrid takes the crown. Here are 10 reasons why we think you should visit Madrid and see why we think it’s the best gay destination in Europe.

Madrid is Tolerant and Gay Friendly

Madrid is not a city where the LGBT community holds up only it the gay neighborhood. For years Madrid has been known as a tolerant place and you can hold a partner's hand or be affectionate in public and nobody cares. For the most part, local residents are used to LGBT people and you’ll rarely encounter hostility, let alone even a single anti-gay comment or glance from a local. The vibe in Madrid is not just tolerance, but rather acceptance. There are very few cities in the world that offer the same kind of welcome to LGBT+ residents and visitors. 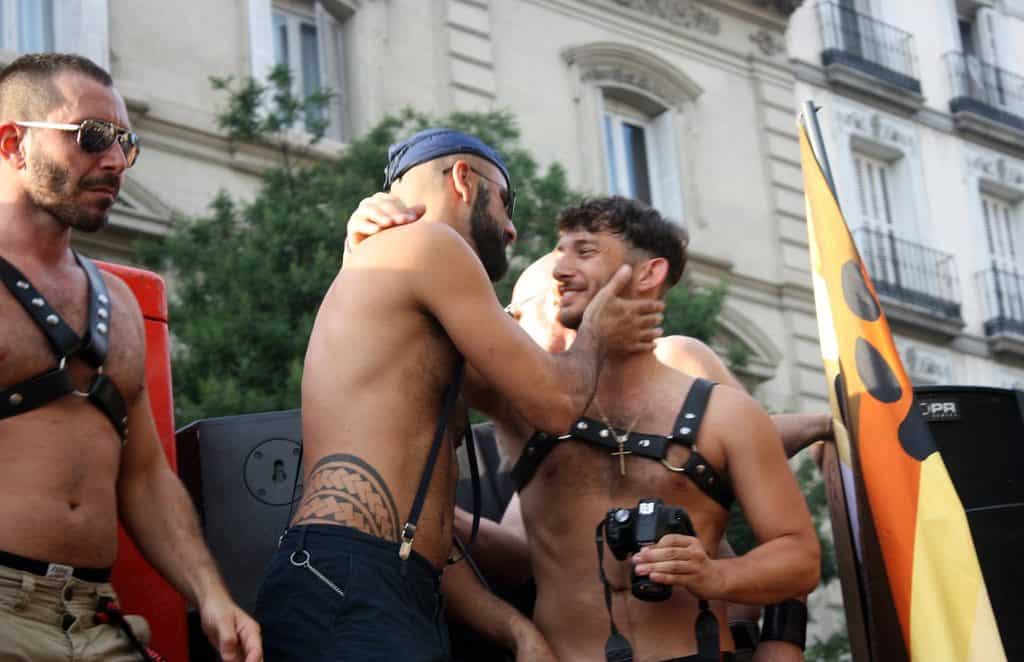 The weather in Madrid is warm nearly all year and the city has more than 300 sunny days per year. Besides a couple of chilly months in January and February (though not terribly cold), Madrid’s climate is pleasant and for this reason, you’ll see locals outdoors at all hours of the day. July and August can be a bit warm in the heat of the afternoon but this is the reason why the Spanish siesta is so well known. As the afternoon turns to evening, the weather cools down and it’s extremely pleasant to spend the evening socializing outsides with friends, family or colleagues. 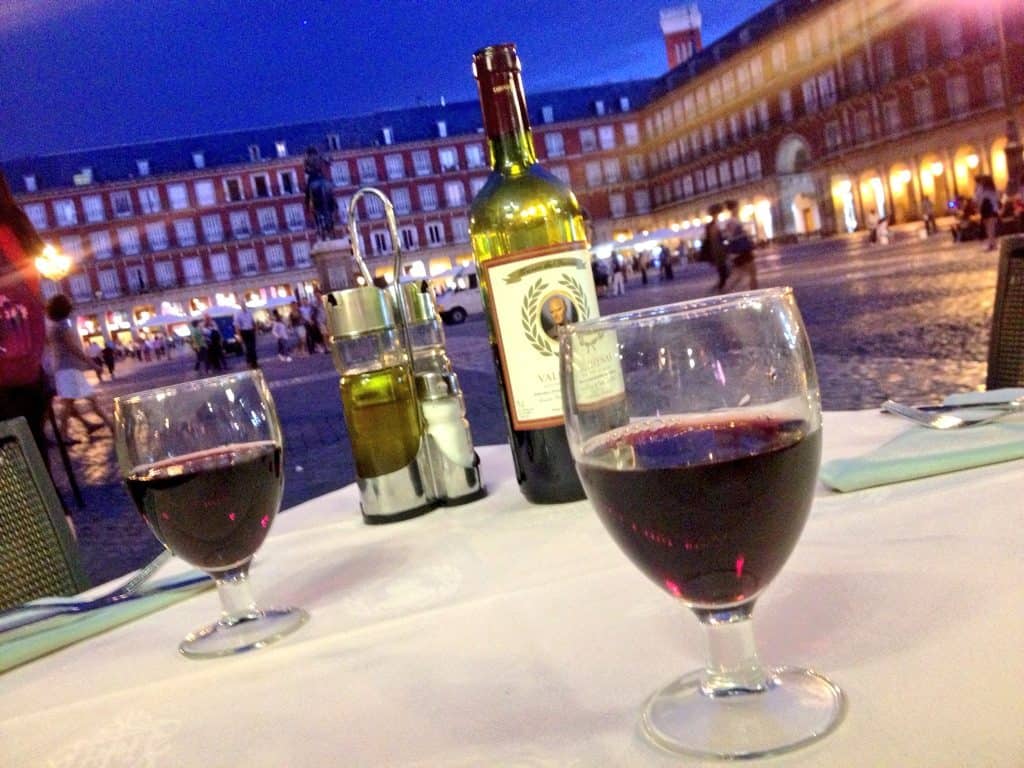 Madrid is full of diverse neighborhoods and each offers its own unique style. Madrid has a great gayborhood, called Chueca and for decades this is where the LGBT community gathered and lived together. But as the city became more open, welcoming and tolerant, the LGBT community has even moved beyond the borders of Chueca to other great neighborhoods like Malasaña, La Latina and Lavapies. Chueca certainly has the highest concentration of gay bars and LGBT specific places, but more and more venues are opening in these other neighborhoods and across the city. In each of these neighborhoods, there are always cool new bars, cafes and restaurants opening. 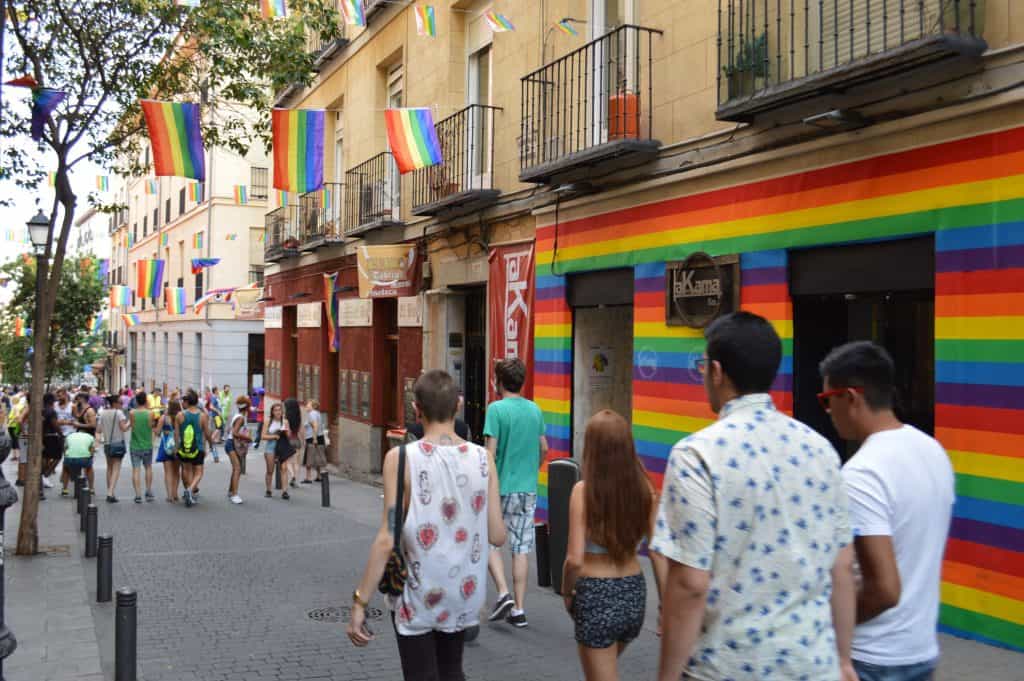 The Party Scene is on Fire

Madrid is well known across Europe as a city with great nightlife. This reputation holds for both mainstream and gay parties alike. It’s incredibly common to see crowds of people at 6 or 7 in the morning finishing their nights out during the weekends. Both Madrid’s size and large gay population supports a big party scene and you have lots of different options to choose from when going out. The city offers everything from bars, clubs, saunas and more to keep you partying and dancing into the early hours of the morning. After the clubs close at 6am, you can even find after-parties that go until 10am or noon in some cases if you so desire. To find the latest events and parties you can take a stroll through Chueca and see the latest posters and flyers advertising the weekend’s events. Or better yet, get connected with a gay local in Madrid who can tell you the best places, events and parties. 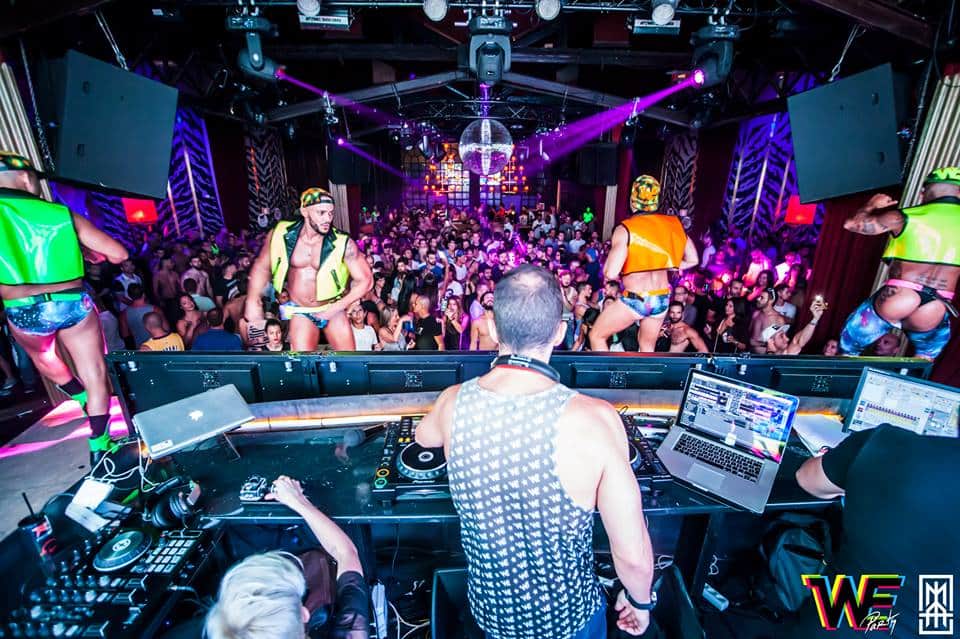 Photo via WE Party

Residents from Madrid are called Madrileños and you’ll find no shortage of attractive people in this city. Spaniards are known for having a southern European flair as many share the light skin and dark features that so many find attractive. The city’s mild weather nearly all year and thriving gay community brings attractive people from all around the country and many keep up with appearances by staying in shape and sporting the latest fashion trends.

The LGBT Population is Huge

The local government of Madrid estimates the LGBT+ population to be around 500,000. Since the city and its surroundings has a population of just over 5 million, this accounts for about 10% of the entire region. With numbers this large the community simply doesn't go unnoticed. And beyond the large population, people are not shy to be themselves and be visible in the community. It’s common to see rainbow flags outside of just the gay neighborhood and see LGBT couples and friends all throughout the city expressing themselves without any sense of fear or shame.

Madrid has held its annual gay pride march and celebration now for 40 years and 2017 marked a milestone.  Madrid hosted the official 2017 World Pride from June 23rd to July 2nd and this event drew crowds from around the world. As a way to unite the global pride movement, World Pride has now been hosted for more than a decade in various cities around the world including Rome, Jerusalem, London, Toronto and now Madrid. Madrid Pride is already a great experience attracting more than 1.5 million attendees annually. It’s the largest pride event in Europe and the 2nd in the world. The experience is one of a kind and it has the full energy of the entire city behind it. WorldPride was bigger and better than ever and the city drew upwards of 3 million LGBTQA+ people attending the 10-day event. 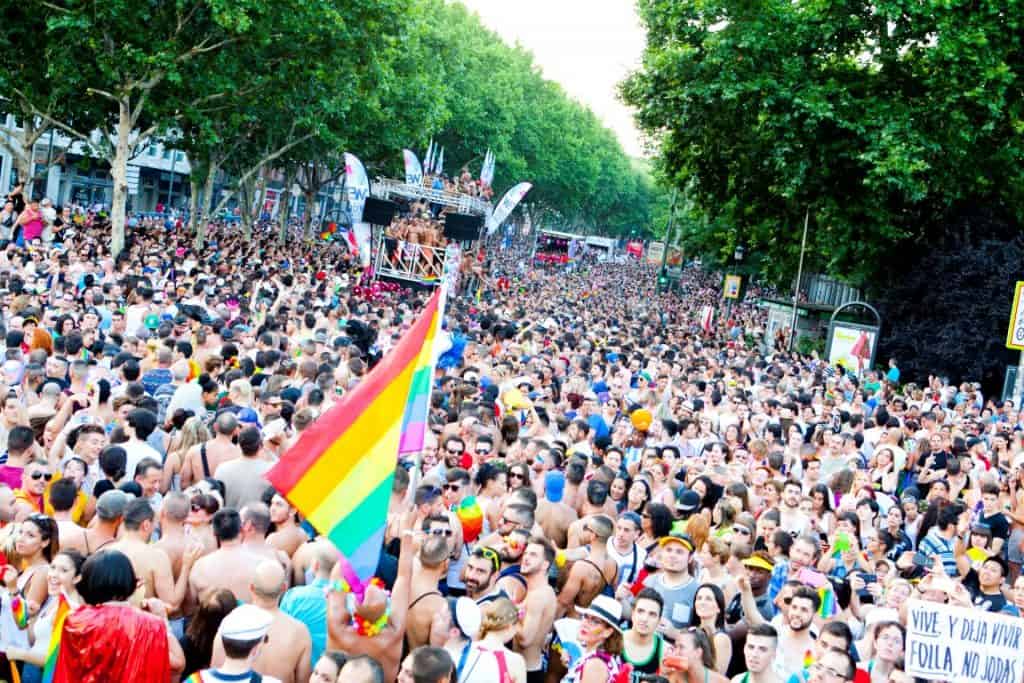 Spain is known worldwide for being a progressive country and LGBT residents have had many important rights and protections since the early 90’s. Just 10 years before, Spain was recovering from decades of a repressive government under Franco, the dictator that lead the country since the end of the Spanish Civil war. But after Franco’s death, Spain changed tremendously in a short period, likely as a result of the repression. Hate crimes and non-discrimination laws have also been on the books since the 90’s and Spain was the third country in the world to offer full marriage equality in 2005. There is of course still work to be done but given Spain and Madrid’s history and its leadership of LGBT equality, it’s still recognized for its great accomplishments for its LGBT citizens.

Madrid hosts a variety of LGBT events throughout the year beyond just gay pride in summer. Yes the pride is the largest gay gathering, but you’ll find smaller things happening in spring, summer, fall and winter. For parties, you’ll find the WE Festival twice a year during New Years and gay pride week when thousands of gays visit to partake in a week-long of dance parties hosted by the WE Group, one of Spain’s top organizers of gay parties. Events with a different flare include GayDays Madrid, an LGBT day at the local amusement park in September, the LGBT film festival Lesgaicinemad in November or MadBear, the annual celebration for bears and admirers held in December. 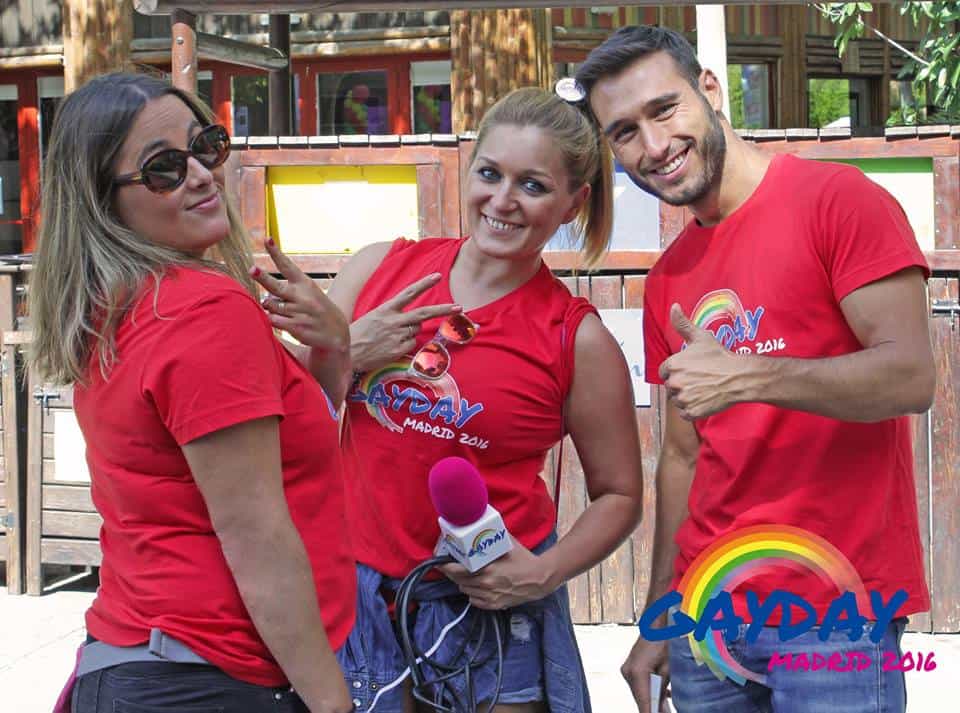 You’ll find more than 200 LGBT specific venues in Madrid including bars, clubs, shops, saunas, hotels and more to keep you busy and entertained throughout your visit. Bars, clubs and saunas are found throughout the city but most of gay shops, cafes and restaurants are located in and around Chueca. Favorite bars include La Kama, Cazador or LL Bar for drag shows. Popular clubs include Boite, Delirio, Kluster, Baila Cariño and Bearbie. And popular cafes and restaurants are Mama Ines, Café Oliver or Carmencita. Head to Madrid in the summer and you’ll find the gays take over two public swimming pools – one located at Metro Lago in Casa de Campo and the other part of the local University Complutense.

Have we convinced you yet why Madrid is the best gay destination in Europe?

Featured image via WE Party.