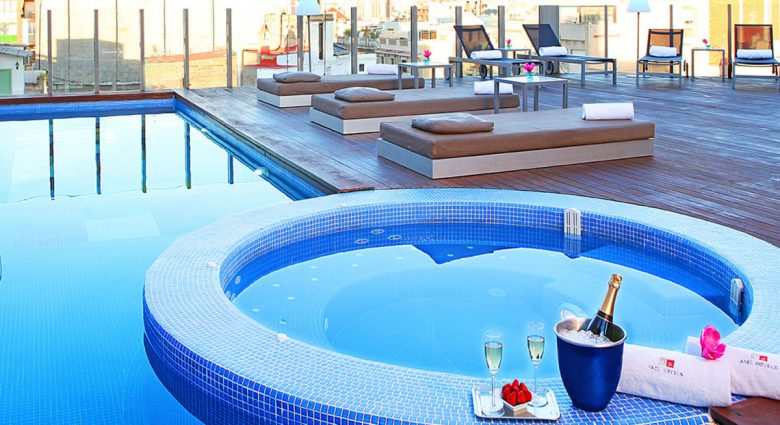 It’s been at least two decades since many hotels, restaurants, and shops decided to advertise themselves as gay-friendly: an establishment where the LGBTQ community is welcome and can feel as comfortable as any other customer. However, rather times we have seen a business promoted as straight friendly, but bars and nightclubs (which are the exception). It also affected the offer of gay hotels in Barcelona.

The Catalan capital had none until Axel Hotels opened his doors and proclaimed itself the first gay hotel not only in Barcelona but also in Spain and even in Europe. Its success proves that a straight-friendly hotel is as good as the gay-friendly ones. So in this article we will talk about some of the main gay hotels in Barcelona and other gay-friendly accommodations to help you have the best experience on your next trip to the Mediterranean city.

We have already mentioned the AXEL HOTEL, one of the main gay hotels in Barcelona. It is perfectly located in the heart of the Gaixample, close to all the gay music bars which make Barcelona one of the best gay destinations in Europe. Besides, it counts a few gay saunas at less than a ten-minute walk. However, the best of this hotel is the well-designed rooms and the high standard service they deliver to their guests.

During the last few years, there has been a trend in Barcelona in which hotels have started to open their rooftops to visitors eager to enjoy a drink in an exclusive environment. Axel is not only a pioneer in this sense but their venue also manages to fulfill all our expectations: the Sky Bar, Axel’s rooftop bar, has become one of the most popular gay bars in Barcelona.

It is the perfect place where to meet other tourists or locals while enjoying the stunning views – whether you prefer Barcelona’s skyline or the fit and muscled bodies relaxing in the Skybar’s open-air swimming pool.

Once it was proved that a gay hotel in Barcelona is not only profitable but also an excellent business, the TWO AXEL HOTEL opened its doors. TWO relays on the golden rules needed to succeed in the gay market: well-designed rooms, outstanding service and facilities (offering everything a gay guest may need), a rooftop offering good cocktails and beautiful views, a covered swimming pool, and a place to socialize. Besides that, it is not only close to the Gaixample, but also at 5 minutes walking from the emerging gay area south of University Square, where the Metro club and the popular Museum and Moeem bars are.

But not everyone can afford a high standard gay hotel in Barcelona. For those who prefer more budget-friendly options, the TOC hostel can be a great place to stay. This hostel accommodation is more than correct, very well designed, extremely central and at a very affordable price (especially if you sleep in one of the shared rooms).

For those who need a bit more privacy, the Hostal Amra offers large rooms with a very simple but very effective design a few meters away from Plaça Catalunya, the main square around the city and the border of its beautiful Old Town.

The Barcelona City Centre, between the Gaixample and the Passeig the Gracia (the most exclusive street in the city), is the perfect venue for groups of friends spending the weekend in the city and who don’t want to spend much money in a gay hotel in Barcelona. It is a very simple hostel, but the service is nice, the rates are reasonable and you just need a five minutes’ walk to reach the main gay bars and clubs, as well all the shops and the historical old town.

For those who love minimalism and innovative design, the Hotel Soho Barcelona is the perfect choice, right the heart of Gayxample. Hotel Soho is located between Plaza España and Plaza Universidad and receives guests into a glazed atrium. It offers an outdoor terrace pool with incredible panoramic views of Gran Vía. They might not be entirely a gay hotel in Barcelona, but being located in the gay neighborhood they receive a lot of gay travellers and have even designed a gay route for places to visit like gay bars and clubs around the area.

The Hotel Balmes is located in the heart of Eixample, just steps away of Avinguda Diagonal. Even though it is not considered a gay hotel in Barcelona, due to its great location and modern facilities it attracts tons of gay travellers all year round. It has a beautiful pool and interior garden and the hotel also features a collection of African art that showcases three-dimensional wooden African masks and sculptures from different sub-Saharan African countries.