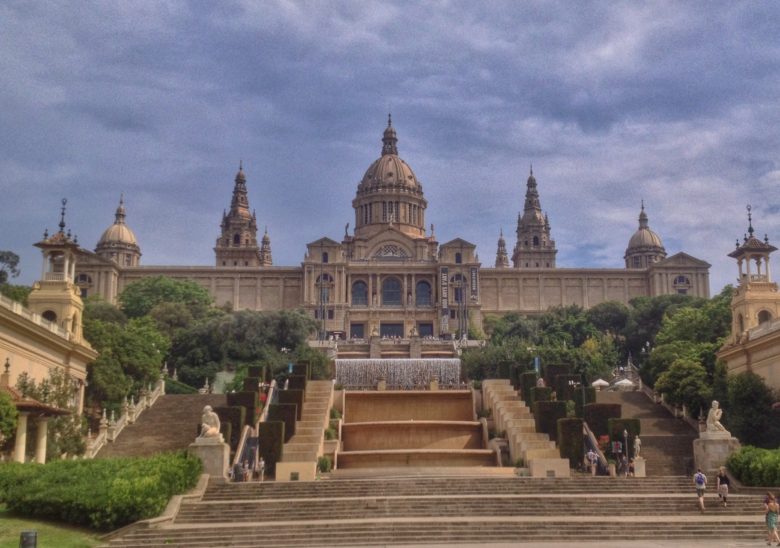 Having lived in Spain now for a year, I've continued to have a jaded image of Barcelona since our first trip to back in July 2012. After spending a week in Madrid, the bustling capital that we now call home, we went to Barcelona expecting a similar scene. When we arrived we were inundated by the crowds, couldn't find decent accommodations and never really saw the appeal of the city. At the time, we just couldn't see why tourists from across the globe thought Barcelona was so great and how it managed to be the most touristic city in Spain.

Having this bad impression of Barcelona, I knew I had to re-visit the city with a clean slate and really decide for myself:Is Barcelona Really Overrated?

This time I planned ahead to ensure my accommodation was fully arranged and well situated, as this one was of the fatal flaws of our first trip. I spent my first two nights staying at the Aspasios Barcelona apartments located off of Rambla Catalunya. It was centrally located within walking distance to many sites and easily accessible my metro. The apartment was fantastic – it’s was a huge 2-bedroom space, with updated furnishings and a comfortable work space where I planned out my visit.

So, this time I set out a plan to discover Barcelona more than I ever had before. But before I decided if Barcelona was in fact overrated, I wanted to re-explore some of the aspects of the city. 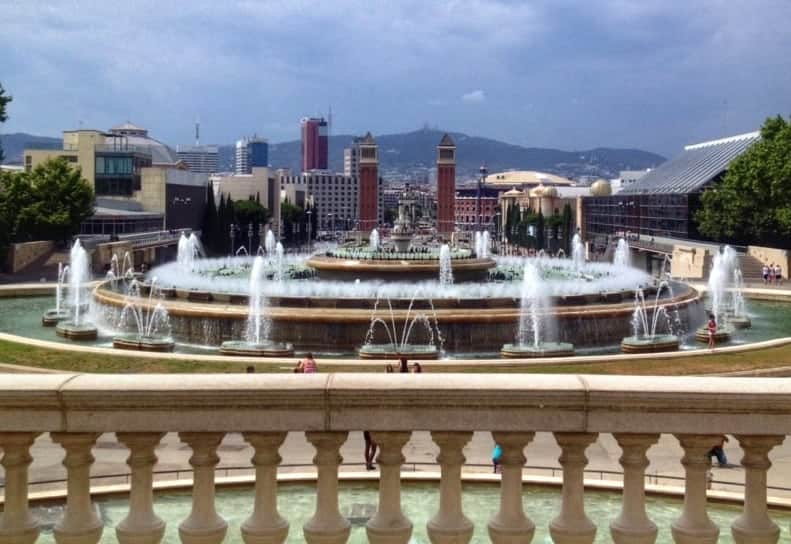 The crowds of tourists in Barcelona were one of the main reasons that I didn’t like the city on our first visit. It didn’t help that our first trip was during July, the peak travel season. Of course, Barcelona isn’t so different in this regard compared to cities like Rome or Paris, though my initial impression was based on our previous visit to Madrid just days before. But this time around, I discovered why Barcelona draws the crowds. Madrid is the financial and political capital of Spain. There are plenty of things to do and see in Madrid, but I will admittedly say that Barcelona has more to experience from a tourist’s perspective. Madrid doesn’t quite have the same grandeur of Barcelona so it doesn’t draw the same amount of tourists. 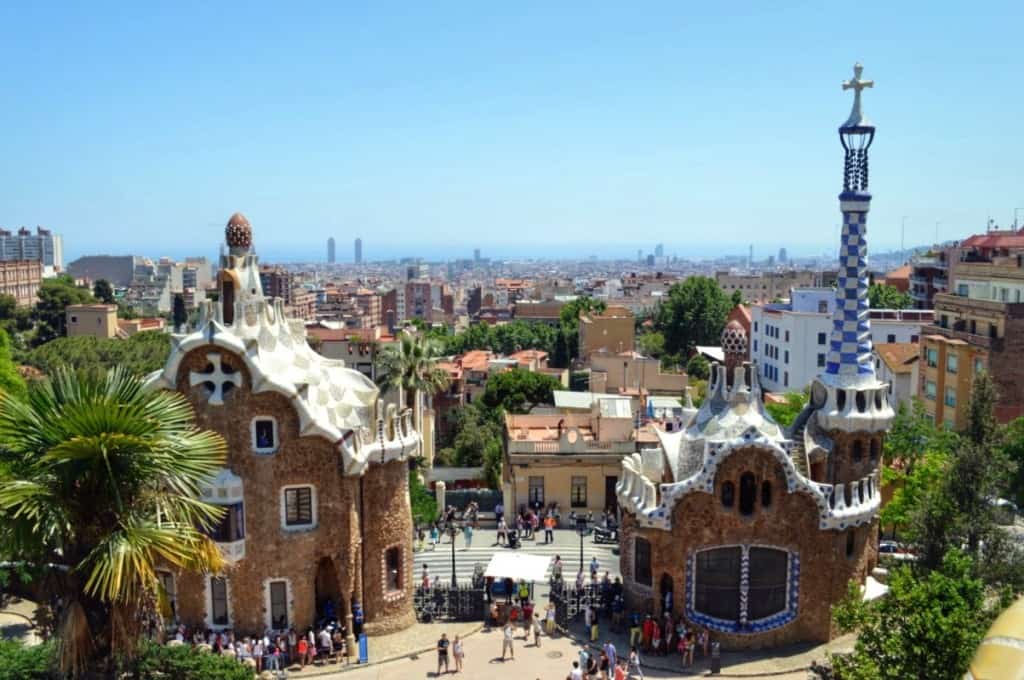 Our first trip to Spain back in 2012 started with a week-long visit to Madrid during gay pride. And during those 7 days in the city, we probably took the train maybe 4 or 5 times total. In contrast, our first day in Barcelona involved 6 or 7 train rides just on the first day. The fact is that Barcelona has so much to see, but not all the sites are centrally located. On a positive note, the public transit is fantastic. The metro is simple to navigate and the bus system is extensive if the metro doesn’t go where you need. Madrid is a more walkable city because all the sites are located within the city center. So if you stay centrally you often don’t need to even use public transit very frequently. Like its European counterparts London, Paris or Berlin – these are fantastic destinations but the cities are large and spread out so you’ll need to spend more time traveling around Barcelona to really see the city. Madrid is unique in this aspect being that it’s a city of 3 million people, but the chances that you need to travel outside of a 2km radius of the center is rare.

Barcelona is well known for having one of the most unique collections of architecture in Spain. Sure, Madrid has its Palacio Real, Granada the Alhambra and Seville the Plaza de España. But while Barcelona is probably most famous for Gaudi’s most elaborate work, the Sagrada Familia, the city is equally packed with countless other modernista and gothic buildings, parks and monuments that are one of a kind. Naturally, Barcelona is an excellent destination for its architecture and it’s difficult to argue otherwise. 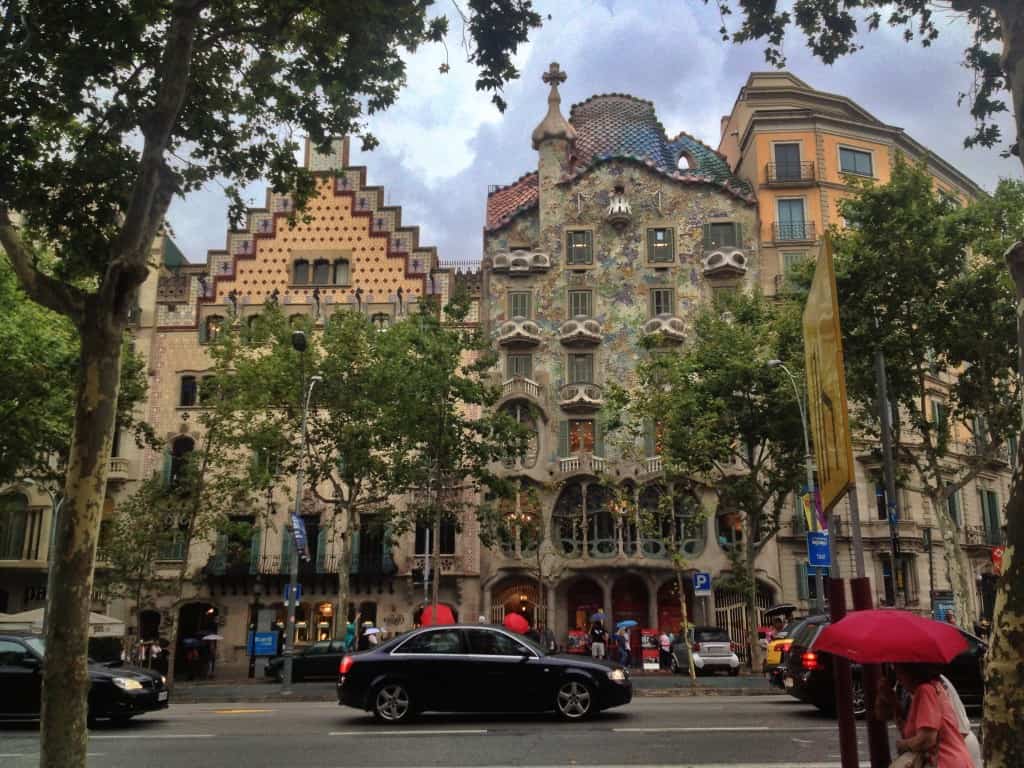 Yes, Barcelona has a beach. It is a natural beach…? No. In fact, the beach seen today was only created in the early 90’s as part of the costal redevelopment for the 1992 Summer Olympics. But the city does have a beach and you can’t say the same for very many other major European capital cities. The weather in Barcelona is also warm and mild so taking a relaxing afternoon at the beach is a nice break from exploring the city, which can leave you exhausted at the end of the day. Truth be told, there are much better beaches both north and south of Barcelona, including one of our favorites, Sitges, which is just a 40 minute train ride south. But for the sake of convenience, the beach culture and generally decent facilities, the beaches in Barcelona are still worthwhile if you don’t want to leave the city.

Barcelona has a good nightlife scene and most tourists looking for that will find great spots to party all night long. Though what does irk me about Barcelona is the perception that it’s the gay capital of Spain. Just about every non-Spaniard I’ve ever met thinks that Barcelona is a haven for LGBT tourists and gay nightlife. It’s true that Barcelona has a gay neighborhood (called E’xaimple) with a good collection of gay bars, clubs and cafes. But it simply does not compare with the nightlife options that Madrid offers. So if you’re a gay traveler seeking a vibrant nightlife scene, head to Madrid to find the best. After all, Madrid has an LGBT population of half a million people, which alone is nearly 1/3 the size of the entire city of Barcelona. Madrid Pride also draws a crowd of 2 million people each year, while Barcelona’s pride is relatively new and draws just 300,000 people. So for the straight traveler, Barcelona definitely has your nightlife. But for the LGBT scene, Barcelona is definitely overrated.

I have always told people that Barcelona has more to see than Madrid from a tourist’s perspective. I would put Barcelona on the list of other famous cities like Rome, Paris and London for having well-known and famous attractions that tourists are dying to see. We admittedly have always known this, hence why we wrote about The One Thing You Must Do in Madrid, which ultimately describes that the city itself is the site and that you won’t really miss out too much if you don’t see any one particular site. So yes, Barcelona – you have Gaudi’s works and impressive Park Guell, you have the stunning National Palace and the impressive Montjuic Fountain, you have the Mediterranean and a beach to go along side, you have the weather and finally, the famous Gothic Quarter, which might be considered unrivaled. 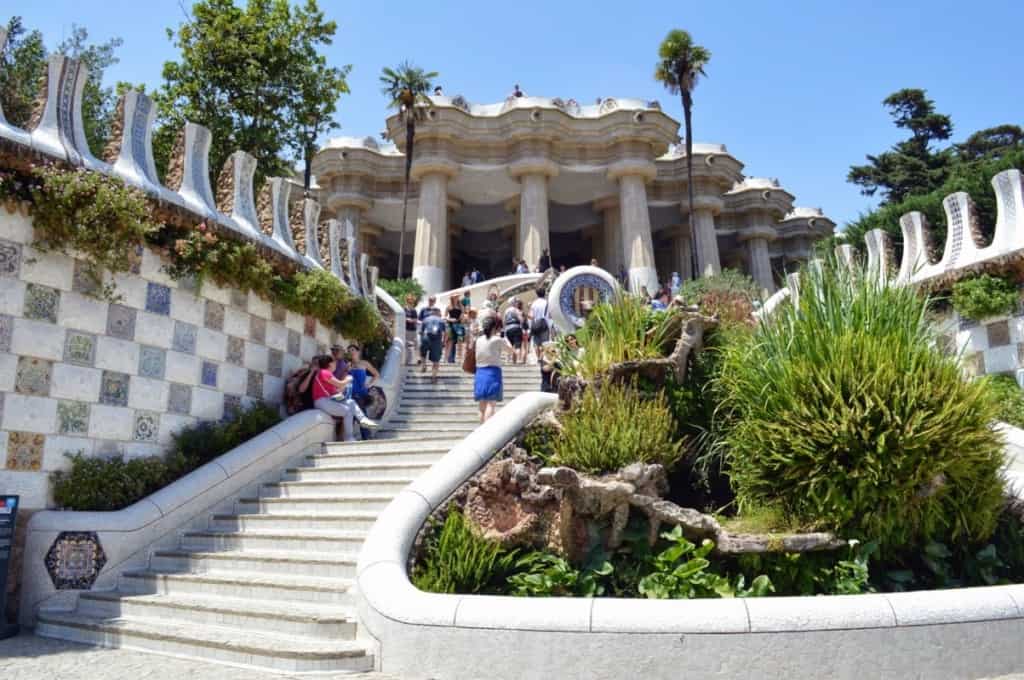 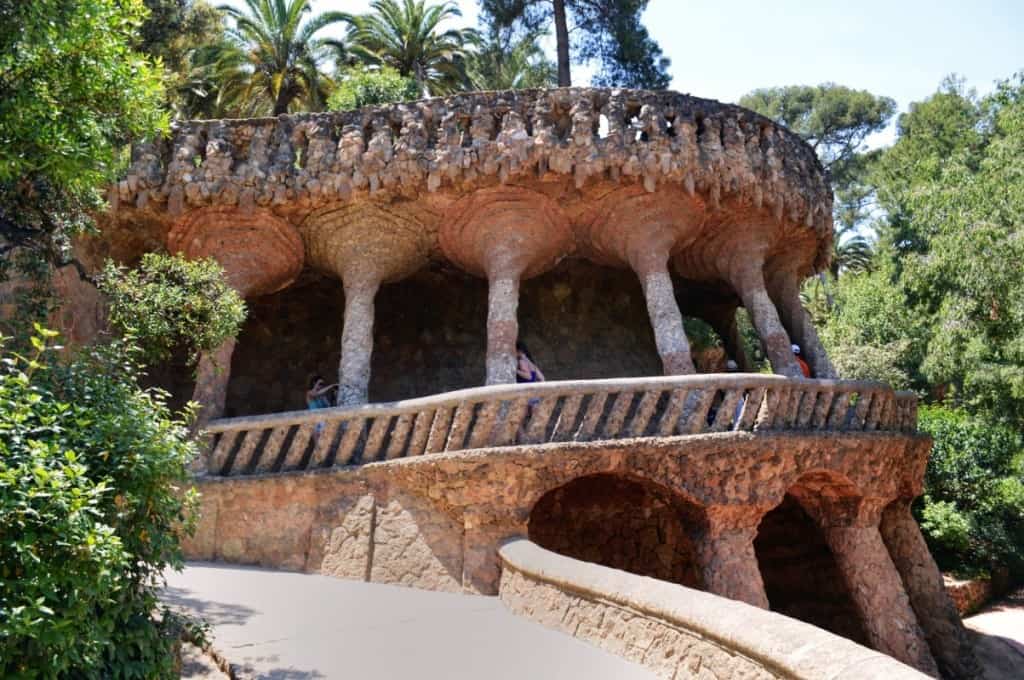 Barcelona is undoubtedly a city was tons of architectural masterpieces, history, culture and numerous activities. I’ll always be partial to Madrid as it’s our home, has less tourists crowding the streets and has a more local vibe not found in the Catalan capital of Barcelona. But for a first time traveler to Spain, or even a repeat visitor, it’s definitely worth a making a visit, though it took a second trip for me to realize.

Like many European capitals popular in the tourist route, an extra bit of research and planning can help make the most of your trip. Below are a few suggestions to consider if you’re planning a trip to Barcelona that might make your visit more enjoyable.

1. Visit during spring, early summer or fall. The weather in Barcelona is still nice and you’ll avoid the major tourist crowds seen during the peak season in July and August.

2. If you’re looking for restaurants or tapas places in the tourist areas, check out Tapas 24, Cata 181 or Bar La Plata to ensure you get tasty, high quality food. Many other places in the city center are low quality and overpriced, taking advantage of tourists’ lack of knowledge.

3. There are many discounted hotels, hostels and apartments outside the city center but it may be worth the extra money to stay central as you can walk more and don’t have to worry about the metro closing before you return to your room. A few extra metro or taxi rides could make up the price difference.

4. Consider taking a day trip to several cities including Sitges, Figueres or Girona as they are just an hour or less away by train and will give you a totally different impression of Catalonia and Spain overall.

5. When visiting popular sites like Sagrada Familia, Park Guell or any of the Gaudi sites, consider arriving very early or very late in the day to avoid the lines.

6. Consider visiting lesser known sites like Parc del Laberint, which happens to be one of my favorite spots in Barcelona. You’ll see a different side to the city where fewer tourists go.

7. For some suggestions about various walks you can do in the city, you can check out my 10 Barcelona walks I published via the app Kamino including: E’ixample Tapas Tour,  Barcelona Secrets, Barcelona with a Hangover and Really Old Stuff in the Gothic Quarter 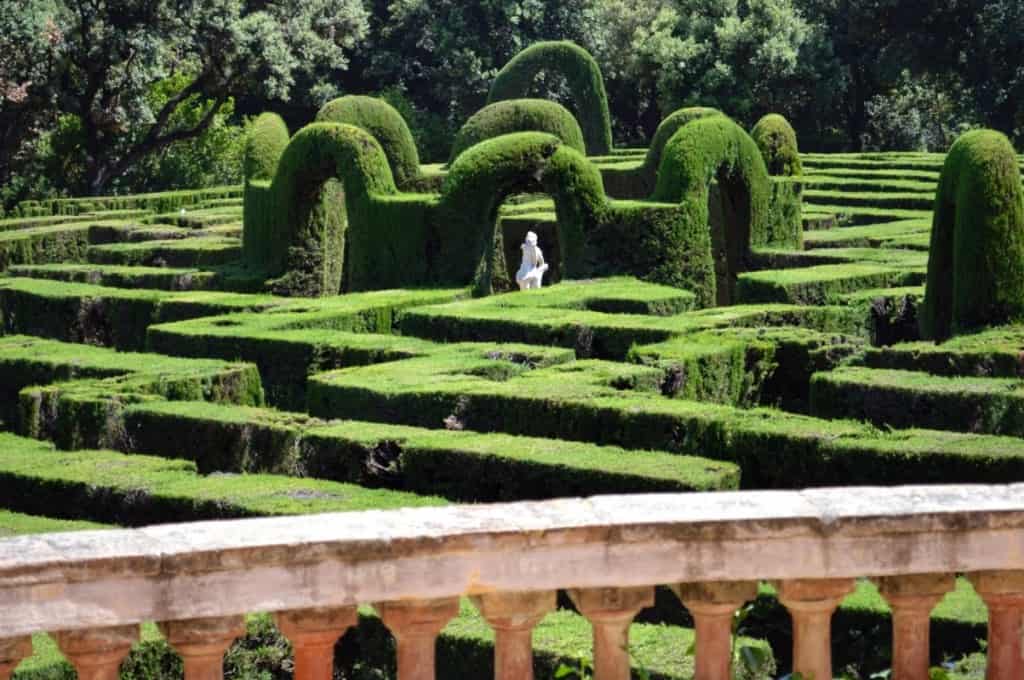 So what’s my verdict? Do I still think Barcelona is overrated? After spending a week in the city for a second time, I finally discovered all the elements of the city that make it special and have changed my initial opinion about not liking Barcelona. Sure, some sites and activities might be overrated and if you don’t have interest in architecture, maybe there are better places to visit. But overall, Barcelona is definitely worth a visit and, like any city, it has its must-see sites and others certainly worth skipping.

[stextbox id=”custom” shadow=”false” bgcolor=”E3DFD6″ bgcolorto=”E3DFD6″ image=”null”]Special Offer! Want to visit Barcelona during Gay Pride? Our friends at Rainbow Gay Tours are inviting gay travelers from around the world to experience an awesome adventure with them during Gay Pride in Barcelona, from July 5th – 10th, 2017. Plus, you can save 50€ by mentioning “Two Bad Tourists” when booking. Find our more info here![/stextbox]

What's your opinion about Barcelona?

28 Comments on “Is Barcelona Overrated as the Top Destination in Spain?”