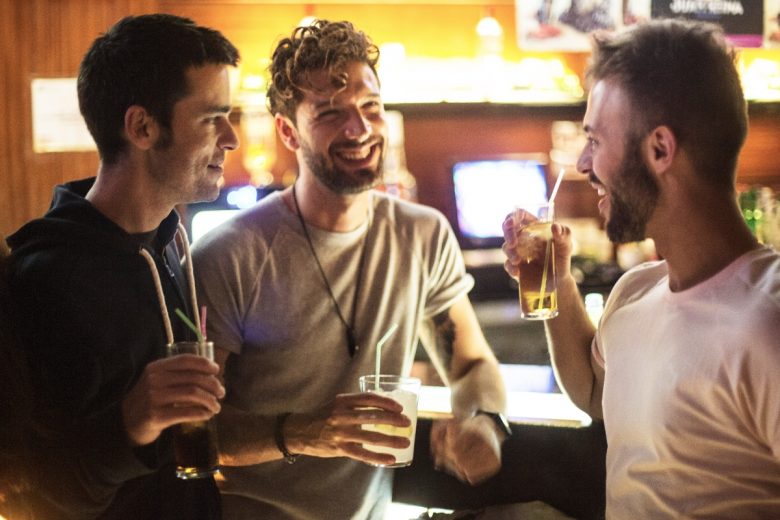 By the middle of the 19th century, Barcelona’s walls limited the city and there was nothing left but to tear them down and allow the expansion of the city, giving rise to one of the most beautiful neighborhoods of the city: L’Eixample, a.k.a. Gayxample. In the 21st century, there’s a curious phenomenon: the Gaixample seems to have become too small for the LGBTQ community of Barcelona, and the LGBTQ life of the Catalan capital has expanded across the Gran Via to the Ciutat Vella. A paradoxical return to its origins!

The Gaixample could not be the main LGBTQ neighborhood without Punto, one of the first gay bars in Barcelona and still one of the most popular ones. It belongs to the Arena Group, which owns three popular gay clubs in the Catalan capital. The audience is quite mixed: it is popular among mature men but, at the same time, many young gay guys go to Punto because you can get a discount on the nightclub ticket.

It’s a small place in the heart of the Gaixample that hardly catches your attention for its decor. Átame’s soul is the Spanish-folkloric-inspired Drag Queen’s show and the faithful and assiduous clientele composed by mainly young people make Átame one of the few places where you can find a lively atmosphere every day of the week.

If you are into beards and bears, Bacon Bear will be your favorite gay bar in Barcelona. The favorite venue among Bears is popular for its friendly atmosphere. They even organize a Picnic day on Thursdays! It’s the perfect excuse to meet new friends. Bacon Bear Bar is a classic in Gaixample and at an affordable price.

Axel Hotel’s rooftop hides one of the coolest gay bars around the city. During the summer it becomes one of the most interesting meeting places. Why? It’s the first LGBTQ hotel in Barcelona and its many guests usually go to the rooftop for a cocktail and some great views of the city. Sky Bar matches the local crowd with visitors from all over the world, a multicultural encounter in a relaxed and fun atmosphere.

It is one of the newest LGBTQ bars in Barcelona, well located in the Gaixample. Cocktails are great, and there are DJ performances to warm up before heading to the club and… they often organize striptease performances with very hot guys!

Many years have passed since Museum first opened its doors and taught LGBTQ bars in Barcelona an important lesson: there is life beyond the Gaixample. Everywhere you look there is a painting, a statue or a TV playing video clips non-stop (it can seem a trivial fact, but it was one of the first bars in the city to do this). You can see many middle-aged guys (and some muscles) warming up before going to Metro, the gay nightclub at the end of the same street.

Besides Museum Bar, Moeem has played an important role in turning the area of University Square into one of the main LGBTQ hotspots in Barcelona. Thanks to the affordable prices and its great cocktails, Moeem has become very popular among the youngest audience, particularly college students who find it to be the perfect place to have some fun.

Zelig Bar is in the heart of Raval, one of the most culturally rich neighborhoods in Barcelona. Its clients reflect the diversity of this exciting neighborhood: locals, visitors, young guys, mature men, straight, gay, hipster, mainstream… Everyone fits in Zelig. Nice mojitos, warm atmosphere and an exquisite music selection by different resident DJs are the best ingredients to have an unforgettable night. But what really makes the difference is that you can go to Zelig by yourself, and by the end of the night you will probably have a plan to continue the party in the club with some new friends met on the spot.

We count not one but up to two El Cangrejo LGBTQ bars in Barcelona. But the one which has been opened during many years is located in the Chino neighborhood, an area in southern Raval, very close to the end of Las Ramblas and to the old port. El Cangrejo has a strong personality, with a gay clientele mixed with straight people aiming to have fun and enjoy the Drag Queen’s shows in this cozy venue. One of the most popular in Spain, Carmen de Mairena, became notorious for performing in this bar. Without any doubt, El Cangrejo is an important part of the history of the LGBTQ bars in Barcelona and it still keeps its appeal and nice atmosphere.

Probably the most exotic gay bar in Barcelona, the original decoration of this place will take you directly to the Versailles Palace. In addition to a unique environment, Versailles offers you cool music and good drinks at a reasonable price. It’s perfect if you always wanted to have a drink sitting on a comfortable golden armchair in the heart of the “Gaixample”.

Anyone looking for more hardcore experiences will find them at night. You only have to enter, get a drink and get yourself into de dark room. This popular gay bar opens every day since 6 pm, and don’t forget there is a “happy hour” every Thursday!

The Botanic Café does not stand out for its decoration or its music only, but also because its private garden is a perfect spot to enjoy some beers and the Mediterranean weather of Barcelona. You can enjoy a more relaxed and intimate atmosphere, have a romantic date, or enjoy some ‘tapas’ with your friends.

La Chapelle is with no doubt one of the most special cocktail venues in Barcelona since you can’t usually find a gay bar full of crucifixes and other Catholic imagery. Its unique decoration and always pleasant atmosphere make this little corner of the gay neighborhood always crowded. La Chapelle is a place you should not miss if you want to know a really symbolic place of the city.

Do you fancy a good cocktail? Then Plata Bar is going to be your new favourite place in Barcelona. A very stylish bar, modern and full of handsome boys. Don’t miss the opportunity to sit on its terrace and enjoy a mojito, or whatever you prefer! Its charming waiters will make you feel at home.