Barcelona has been a destination of choice for gay tourists for the past couple decades and its reputation as a gay friendly city is well deserved. The Mediterranean climate is difficult to pass up and the proximity to beaches and mountains make it a visual masterpiece. We've been to Barcelona at least five times and we discover something new and exciting every time we visit. With mild weather, a thriving gay scene and a great quality of life, Barcelona is wonderful anytime of the year but the city explodes with life during its annual pride celebration.

Pride Barcelona 2018 is scheduled for June 23rd to 30th and features a dedicated pride village with food and drink vendors plus a parade, lots of activities and performances throughout the weekend. The city hosts numerous parties and activities including an amazing (and free!) outdoor foam party as part of the festivities. In fact, last year marked the 10th anniversary of Pride Barcelona and each celebration just gets better than before.

We attended Pride Barcelona in 2015 and had a blast so we thought we’d give you a rundown of 9 amazing reasons why we think you should attend! We promise  you won't regret it.

Special Offer! – Want to visit Barcelona during gay pride? You can save 25€ on the Barcelona Gay Pride package with Rainbow Gay Tours, our favorite European gay tour operator. Just mention the promo code “TWOBADTOURISTS” when booking for your discount. More info here! 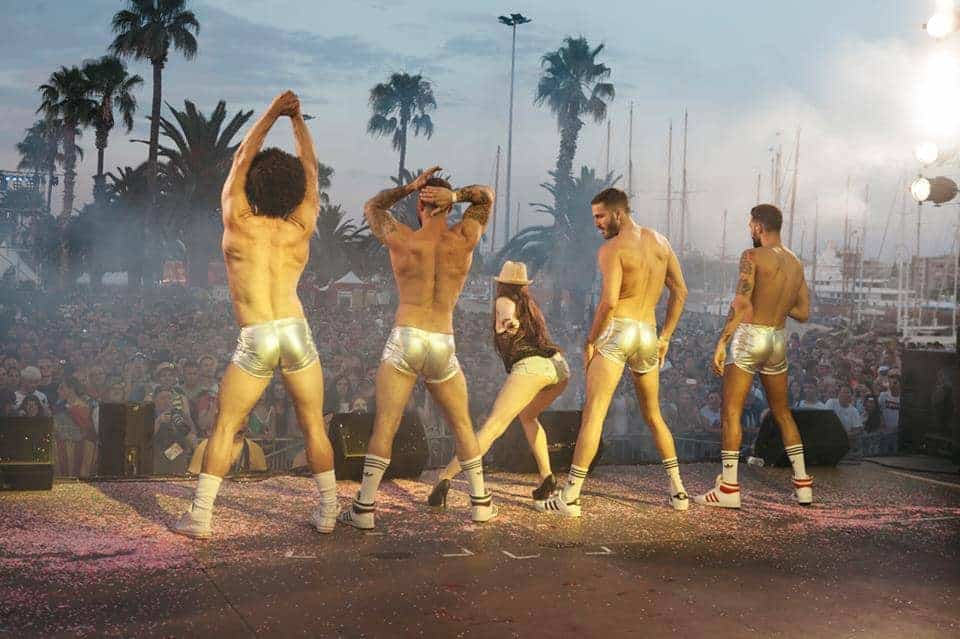 Barcelona is a Great Destination

Well-established on the LGBT travel map, it's likely either you or someone you know has raved about this sea-side Mediterranean city. And for good reason – Barcelona boasts a cosmopolitan and welcoming environment for all types of travelers from every corner of the globe. It's one of those cities that has so much to offer, you can never see it all. From stunning architecture, beautiful parks, sprawling beaches and great neighborhoods, Barcelona is a destination worth visiting year-round, but of course one not-to-miss during pride season.

Barcelona is an open and welcoming city year-round and you'll see same-sex couples expressing themselves without fear. Yes, you can hold your partner's hand and nobody cares and most locals won't even notice. The city is even more out and open during pride and it's a great place to visit where you can truly be yourself.

The vibe in Barcelona is not just tolerance, but rather acceptance. There are very few cities in the world that offer the same kind of welcome to LGBT+ residents and visitors. In fact, the region of Catalonia, which Barcelona is the capital, was the first region in Spain to recognize same-sex domestic partnerships back in the 90's so they've always been way ahead of the game. 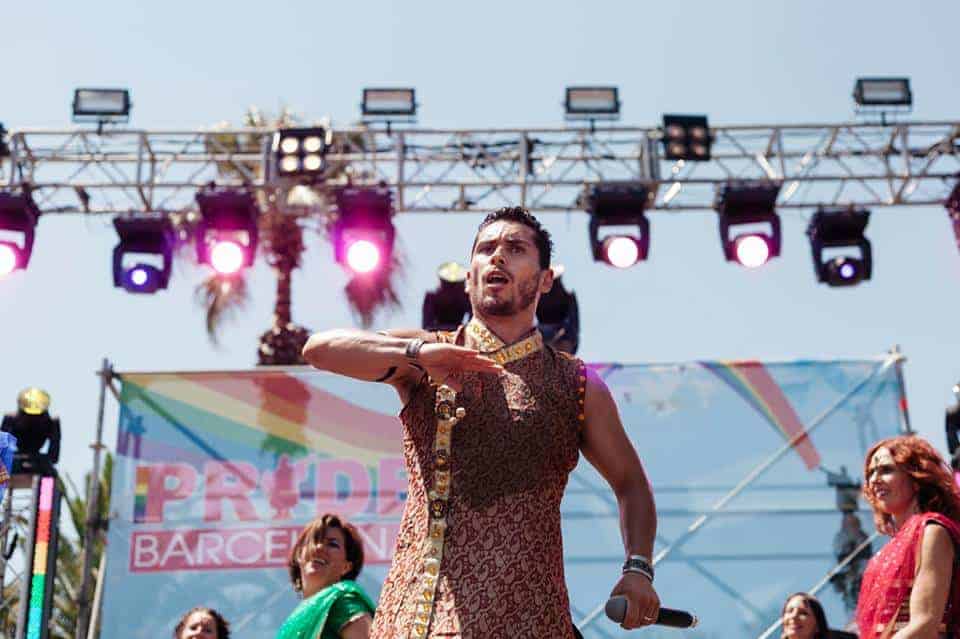 Our favorite event of the entire pride weekend is the outdoor foam party. The event is free and open to the public and gays and straights come together to celebrate a party full of diversity. You'll find foreigners, locals and people of all aging dancing the night away to great music in a dance floor full of suds. 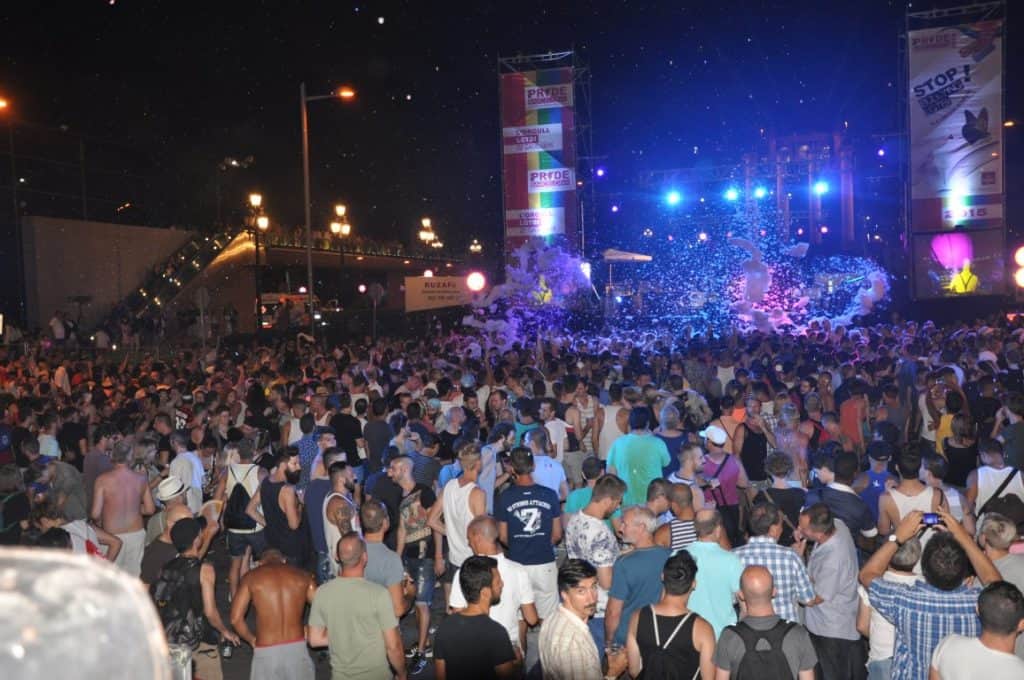 Barcelona’s city-side beaches make it one of the best well-rounded destinations in Europe. Just steps from the city center and along an additional 4km, you can find plenty of beaches to satisfy your summer time lounging needs. There are two different gay beaches in Barcelona to choose from. The first is called Platja de Sant Sebastià near metro Barceloneta, which is closest to the city center. The other gay beach is called Platja de la Mar Bella near metro stop Poble Nou. This clothing optional beach, like most nude beaches, is farther out from the center on the northern end of the city’s beachfront. This is where you’ll also find the popular hangout called Chiringuito BeGay, a restaurant and bar where the gays go have a drink or a meal while taking in the afternoon sun.

The parties are beyond great during pride. Luckily, LGBT rights in Barcelona and Spain have advanced to the point that the pride is more of a celebration than a protest. Sure, there is always work to be done for equality but people aren't afraid to celebrate the victories so many people have fought for. One of the fun day time events is the Holi Pride Party taking place on Saturday the 30th. Originally from India, this popular transplant event is a festival of colors where people throw colored powder into the air and all over each other all while adding water to the mix. Yes, it's one big party and the locals are excited to have the freedom to celebrate being who they are. 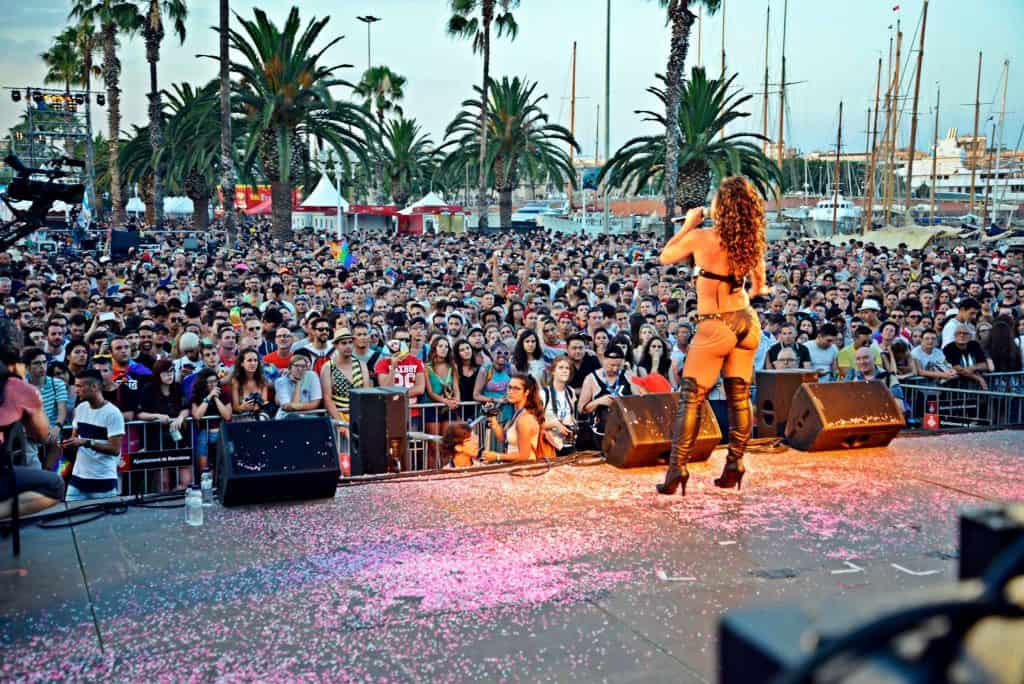 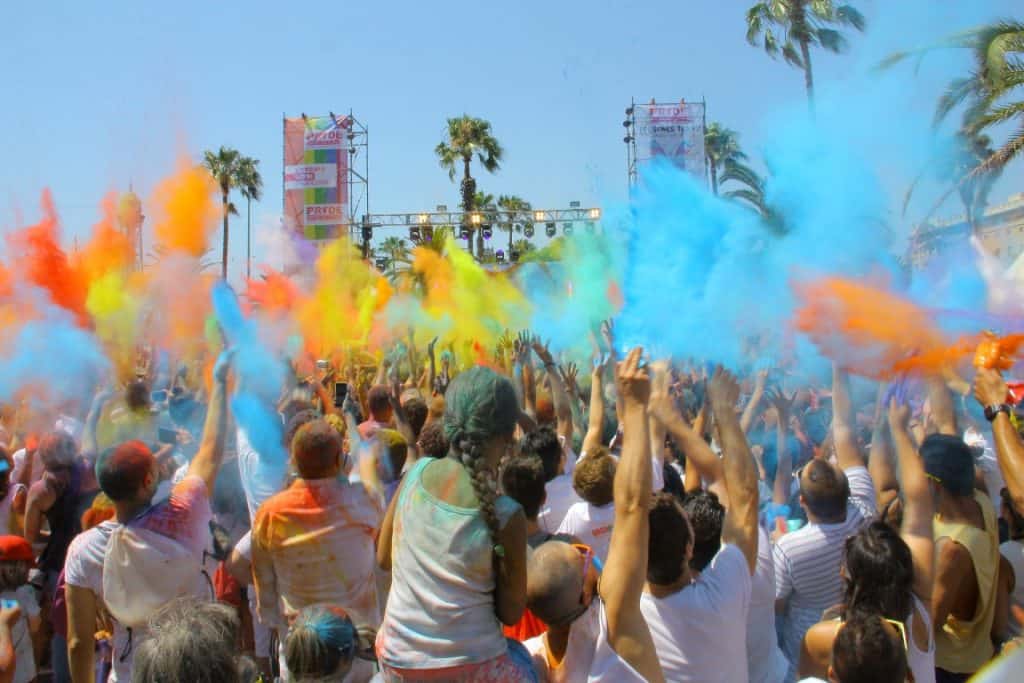 The Pride Village includes plenty of stands, vendors and the main stage. Pride in this vibrant, international metropolitan city with Catalan culture and flair is a must attend annual event. The village is packed with cool things like a High Heel Race, Miss Drag Pride Barcelona and even activities for kids. The High Heel Race is one of the most hilarious, where a group of guys compete in a race at the pride village while wearing a pair of heels. Of course, there’s also the Pride Parade on Saturday that attracts around 200,000 spectators and there are plenty of pride parties around the city. 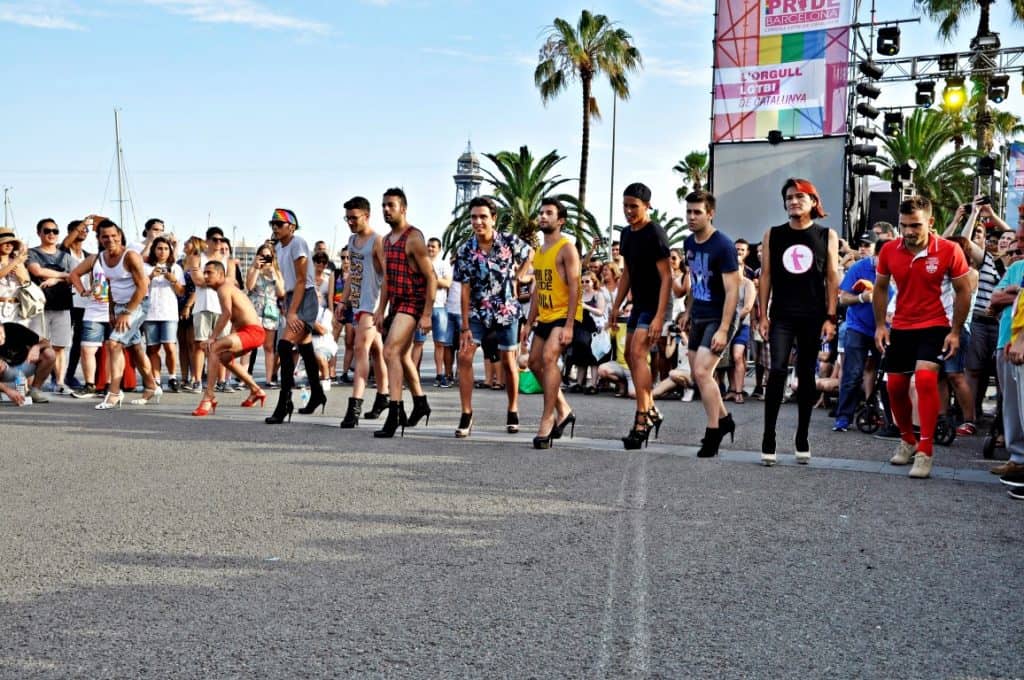 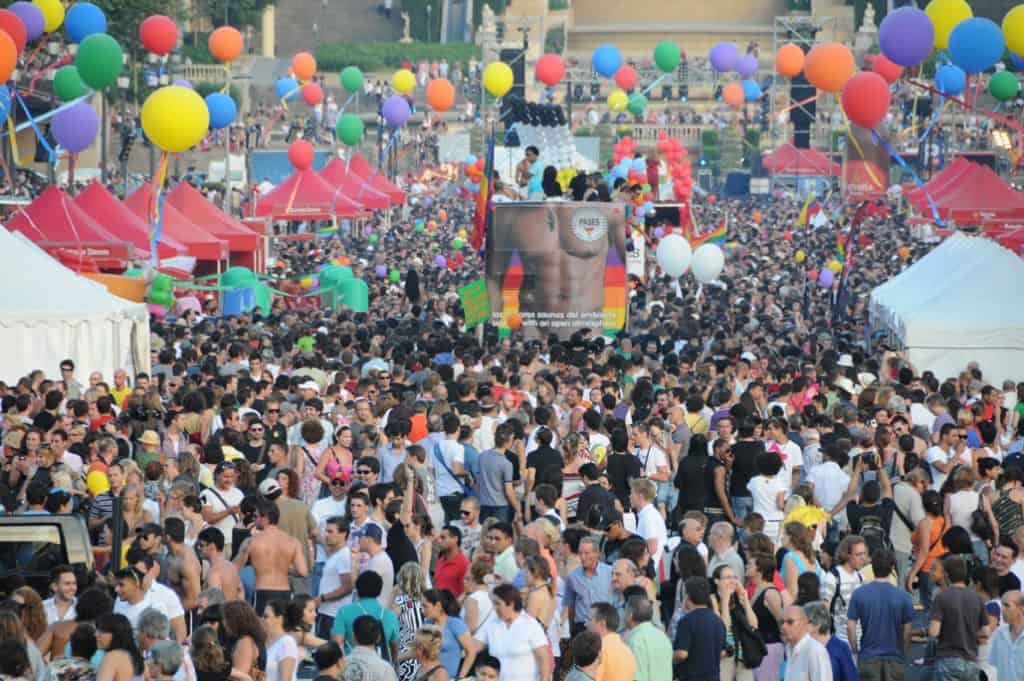 The pride parade is held Saturday afternoon each year typically starting at 5pm, when the city starts to cool off for the evening. And if you'd like you can even find your favorite truck playing the best beats and take up a spot behind and walk, march or dance your way to the finish. The parade is one of the most interactive events of the weekend and is one of the highlights not to be missed. 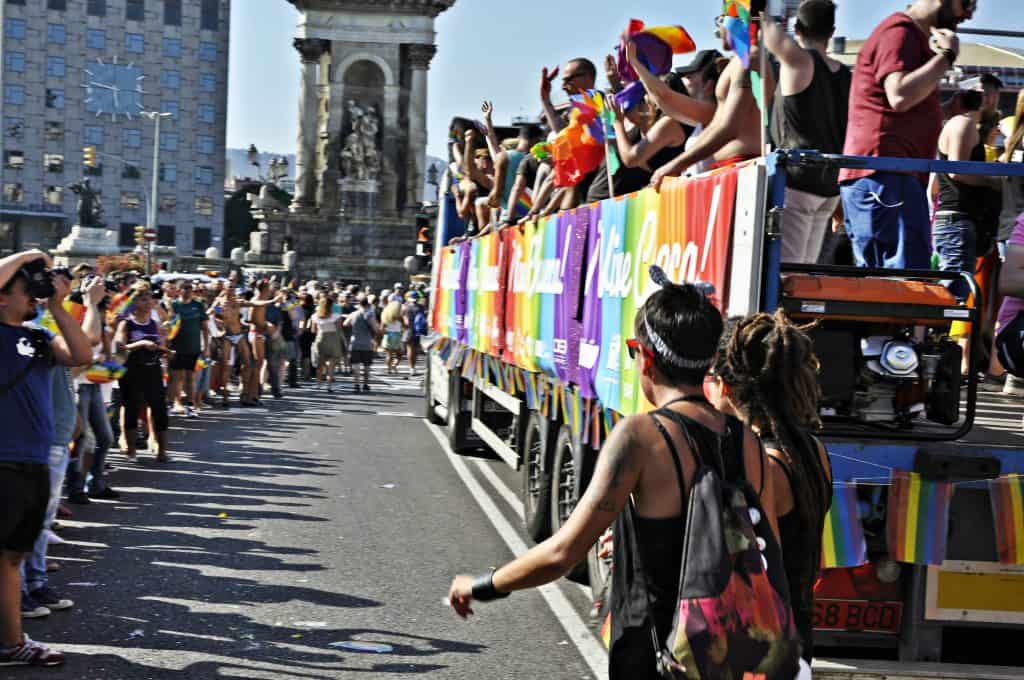 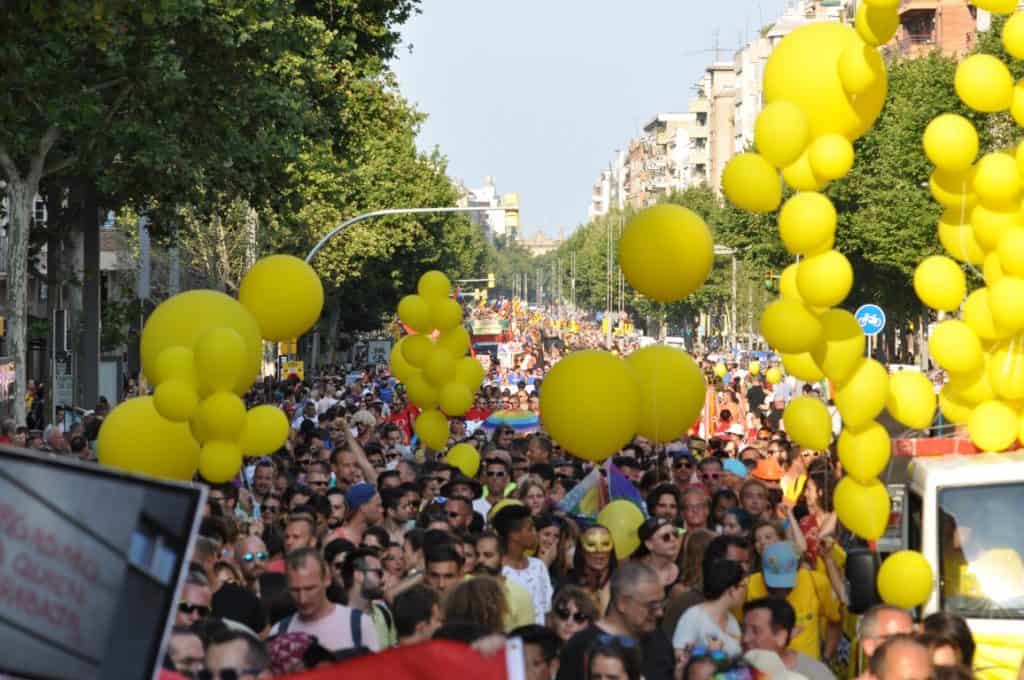 There’s nothing better than sipping a beer or cocktail in the afternoon sun and enjoying a relaxing conversation with good company. And of course, you should hang out in Barcelona’s gay neighborhood Eixample, often called “Gaixample” among the locals. The neighborhood is centrally located in the city and depending on the time of day, there are several gay restaurants worth visiting including El Berro, Osbar, The Bench and The Pink Elephant. As day turns to night, this is where you’ll find most of the gay bars and clubs in Barcelona including Café Bar Punto, Axel Sky Bar, Night Barcelona, Metro Disco and the various Arena dance clubs. 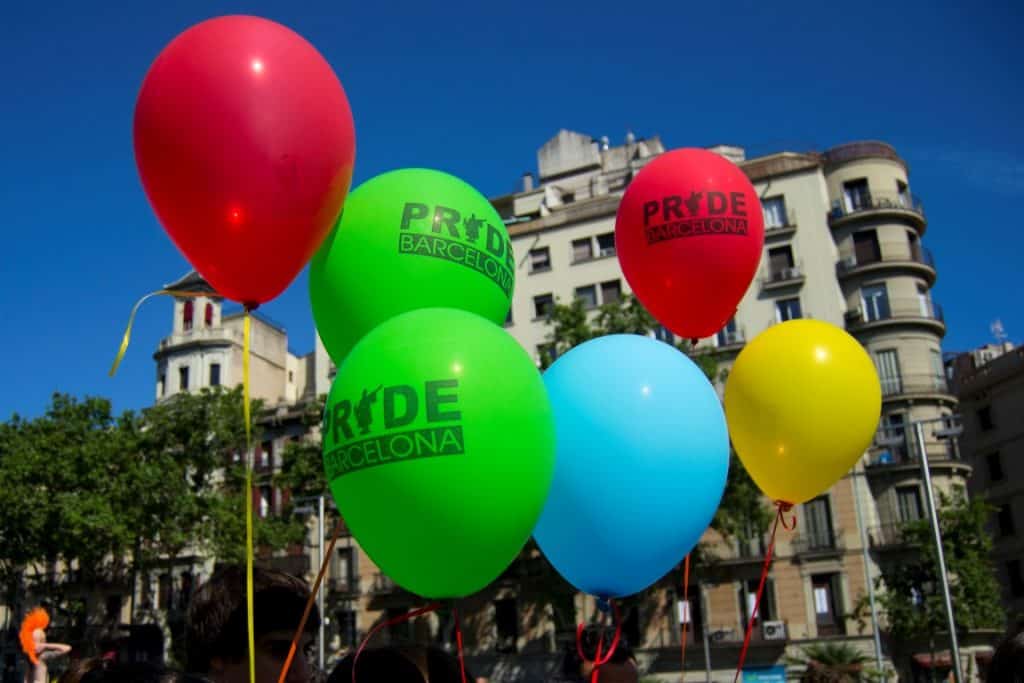 If you've never been to Barcelona before, pride is a great time to visit because you can combine the festivities of one of Spain's top LGBT events with a tour of one of Europe's most famous cities. The celebration, parties, beach, architecture and cuisine are just a few reasons why we keep going back. Or even if you've visited before, why not plan a return trip and take in all that Barcelona does so well?!

Special Offer! – Want to visit Barcelona during gay pride? You can save 25€ on the Barcelona Gay Pride package with Rainbow Gay Tours, our favorite European gay tour operator. Just mention the promo code “TWOBADTOURISTS” when booking for your discount. More info here!

Note: this article was written in collaboration with Pride Barcelona. As always, rest assured all opinions are 100% our own and we don't sacrifice our integrity for a sponsorship. In fact, we attended Barcelona Gay Pride in 2015 and had a blast and would absolutely recommend it to anyone interested in visiting.  Photos courtesy of Pride Barcelona.