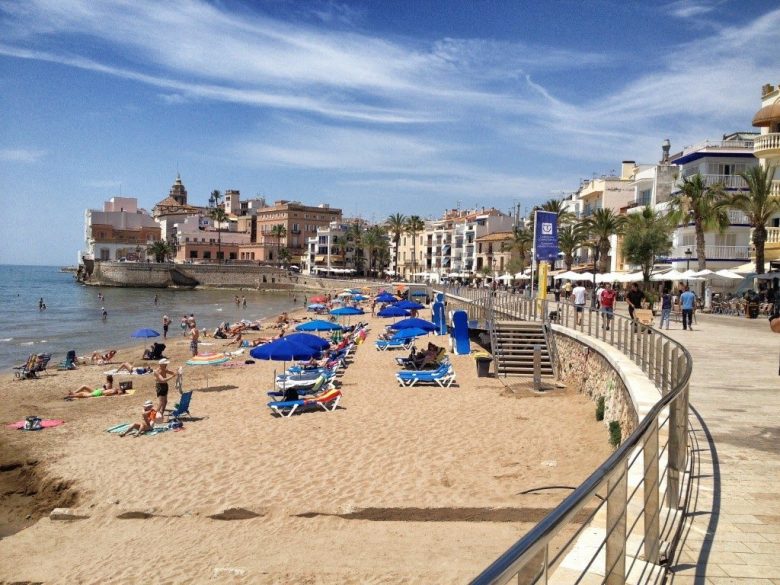 Finding a Gay Hotel in Sitges is not difficult at all. In fact, what’s really unusual is to find a Gay unfriendly accommodation! During the last twenty years, many shops, bars and all kinds of businesses have been adding a Rainbow sticker to their shop windows, sometimes as a prove of their tolerant attitude, other times just to gain some extra customers. However, Sitges is a world apart. By the time all those multicolour stickers started becoming popular, Sitges was already a classic among the LGBTQ’s holiday’s destinations. After so many years, offering a service oriented to the gay community is part of Sitges’s DNA. So whoever who looks for accommodation in Sitges, he must know that any of the hotels and B&B of in the town will be friendly, no matter the sexual orientation of their customers. Next we introduce you a selection of the most emblematic gay hotels in Sitges.

One of the reasons why Sitges is among the favourite gay destinations is its active night life. It basically concentrates around the carrer del Pecat (Sin’s Street), a street which is actually called First of May Street but that was funnily renamed by the locals. It is around this area where it is based one of the main gay hotels in Sitges: the Parrots Sitges Hotel.The best of the Parrots is that it offers clean and decent room a few meters far from the most popular and crowded gay bars in Sitges. Parrots is a 100% gayfriendly hotel where guests who make their reservation directly via the hotel’s web page receive free entry to Parrots Sauna, as a part of the Parrots VIP Promotion. In addition, you will receive free use of Parrots Gym & Fitness and discounts in over 15 other venues in Sitges. So it makes Parrots not only the perfect place where to sleep but also where to find some fun and where to meet locals and other tourists.

It is only a five minutes’ walk from the Carrer del Pecat that we find so many Vilas and little palaces from the nineteenth century. Sitges was a very active town a century ago, plenty of artists, home of well-known painters and frequent destination for poets and writers. The Romantic is in one of these stunning Vilas, showing the splendid Catalan Modernist architecture and an exquisite decoration that keeps a nineteenth century look even inside the rooms. It is a small venue which offers a very personal and cosy service.
The Romantic la Renaixença was probably among the first gay hotels in Sitges: a century ago no any venue was going to show a rainbow sticker, but it is known that Sitges was already popular along the gay community back then.

It is an advantage to be so close to the Carrer del Pecat, however, many people prefer a more relax accommodation but still in the town’s centre. The Casa Rainbow is the perfect gay hotel in Sitges for those looking to be central but escaping from the party epicentre. Casa rainbow is a cosy venue whose rooms are not only cosy and large, but also inspired in old Hollywood celebrities as James Dean and Marilyn Monroe. And the best of all is its reasonable price.
Besides, it is not far away from the pubs, it is very close to the romantic old town and you just need to walk few meters to reach the beach.

Autumn is one of the best seasons to visit Sitges. Not in vain, it is usually around October when the town hosts the Sitges Film Festival, focused in Horror and Fantastic Cinema. The Hotel Melià Sitges is one of the hotspots during the event, as hosts the Auditorium, where the opening and closing ceremony takes place.
Melià Sitges might be a bit more expensive than other gay hotels in Sitges, however it is really worth it: it is located in front of the sea and from one of its many balconies you can enjoy the best views over the town, with its old main church shaping Sitges’ skyline.