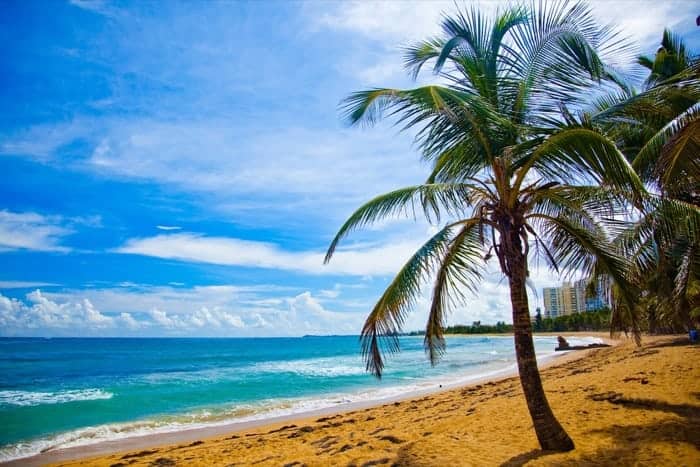 Puerto Rico is considered the most gay-friendly island in all of the Caribbean making it an ideal destination. Of course, you need to be smart everywhere you travel, but your “Out-of-the-Closet-ness” factor is on your side on this little island just south of the southern tip of the US. No trip to Puerto Rico is complete without visiting the island’s capital, San Juan and indulging in the unique culture, gastronomy and nightlife.

Puerto Rico has its very own culture and customs yet is very much connected to the United States. Though Puerto Rico is not one of the 50 states, it is a territory of the US, which means Puerto Rican’s receive a US passport and the currency is the US dollar. Great news for any Americans who want to visit – that’s right, you don’t even need a passport, there’s no money exchange and it’s just a quick flight from the southern US with many direct flights to other major US cities. There are also a number of direct flights from other parts of Latin America and easy connections to Europe through Spain.

San Juan has lots to do and see and it’s worth spending at least a few days there before visiting other parts of the island. Popular neighborhoods include Old San Juan, Isla Verdo and Condado – the most gay-friendly area of the island. You can spend half a day exploring Old San Juan where you’ll find blue cobbled streets, open plazas and lots of great boutique shops – all styled in Spanish architecture. The old town is compact so it’s all easily accessed by walking. Puerto Rico has a tropical climate so it’s beach weather all year long.

You can download the Gay Puerto Rico guide for free. Just provide your email address and we’ll email you a PDF. 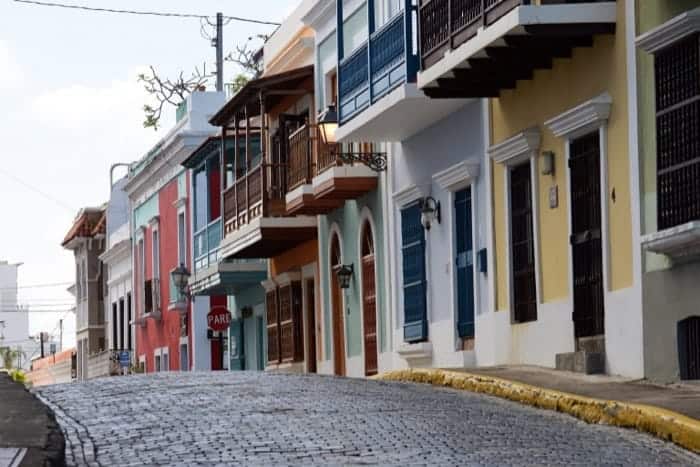 The best way to get to your San Juan hotel or accommodation from the airport is to take a taxi or rideshare. Taxi rates are fixed between $17-$21 depending on your destination. Rideshares like Uber can pick you up at the designated area on the ground floor of Terminals A and B. Bus service also runs from the airport, however, they don’t allow large luggage on the bus so taxi is a good option. You can also pre-book a shared airport transfer.

Taxis are easy to find at the airport (if you’re just arriving) as well as throughout the metro areas like Condado, Santurce, Isla Verde, Miramar, Ocean Park, and other nearby districts. Old San Juan offers a free trolley system offering transportation to key locations and landmarks. Ridesharing in Puerto Rico is now common in San Juan but Uber is currently the only major rideshare company offering its services on the island.

O:live Boutique – This boutique, luxury hotel offers 15 rooms and an easy walk over to the beach. Expect a full Mediterranean-style experience from its modern, eclectic decor to the rustic, Mediterranean restaurant in the hotel.

La Concha a Renaissance Resort – has a friendly vibe and close proximity to the gay beach. You can expect to see other gay guests here. It has a mid-century modern look and an upscale casino set in a fabulous oceanfront shell-shaped building. The property has multiple swimming pools and a sexy, lobby bar.

Coqui del Mar Guest House – This small gay-owned guest house is gay-popular but not exclusively gay. Nearby you’ll find a few good popular restaurants that the friendly owner Rob Villacres can recommend. Get a local vibe while soaking in the two pools (one is always clothing optional), or the jacuzzi. Walk to the gay-friendly beaches, the gay cruising beach, bars, restaurants and lively San Juan scenes.

Andalucia Guest House – a gay-owned gem in Ocean Park. This cozy inn is decorated with Spanish/Moroccan flare and is surrounded by trendy restaurants and shopping and is located just four blocks from the beach. The owners are welcoming and eager to share their favorite San Juan tips. This guest house remains one of the city’s best values.

There are many sites for apartment rentals in San Juan, with AirBnB probably being one of the most popular. Prices are generally comparable to budget hotels, especially if you’re willing to get a room in a shared apartment. Book AirBnB →

There are even a few LGBT-oriented booking sites like misterb&b with listings from gay hosts for gay guests where you can either rent a whole apartment or a private room in a shared apartment. Understanding Puerto Rico’s gay scene is much more easily done with the help of a local and apartment sharing is one of the best ways to meet someone living in the city who knows how things work, where and when are the best nights to go out, and what places to eat at and which to avoid. 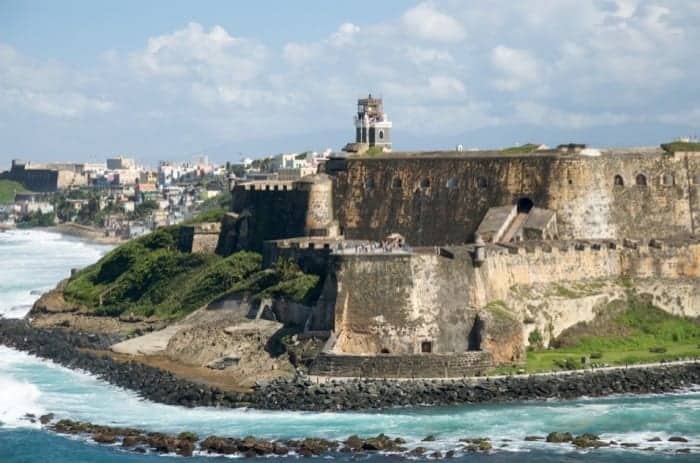 Culinary Tours – Indulge in the food pleasures of Old San Juan on a food and history tour of the fortified colonial city. Walk its blue cobblestone streets and taste some of the food and drinks that make Puerto Rico so inviting for foodie fans. Book tour →

Old San Juan – take a tour of the oldest city in the US and its territories. Explore the Las Americas Museum featuring African and native heritage. Then see the Fort San Cristóbal filled with fascinating history and artifacts. Finish with a spot of shopping in the old town. Book tour → 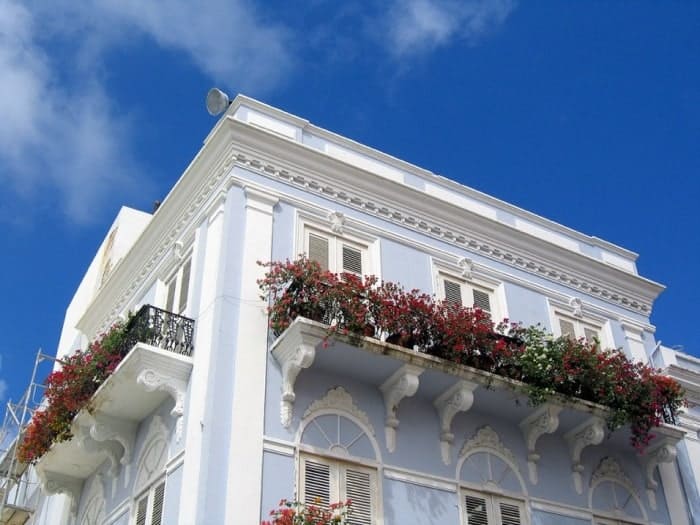 Restaurants and Cafes in San Juan

Marmalade – a mix of contemporary French, Caribbean and Spanish cuisine. Put yourself in the chef’s capable hands with a tasting menu or build your own feast from the a la carte menu, with wine pairings from Marmalade’s well-stocked cellar.

Hecho en Casa – this family-owned restaurant focuses on comida criolla and showcases some of Puerto Rico’s most traditional staple dishes. At Hecho en Casa, they make sure that everything is locally sourced and made from scratch in-house.

La Casita Blanca – one of the most traditional dining spots in the San Juan metro region. With a delightfully old-school setting in Santurce, this restaurant will not only satisfy your taste buds but warm your soul. Every day, a list of 10 to 12 dishes are posted on a whiteboard, with items like stewed beef with rice and beans, codfish and mashed root vegetables, and crabmeat gazpacho waiting to fill your belly.

Cayo Caribe – a friendly eatery where creole and seafood dominate the menu. From savory mofongo with lobster to mahi mahi tacos to arroz mamposteao and chuletas (pork chops), this restaurant offers home-cooked Puerto Rican cuisine at its finest.

Cocina Abierta – the menu takes an open-minded approach to food, sourcing flavors from the Caribbean to the Mediterranean and beyond. Located in the heart of the Condado, this lively, modern spot is close to many popular hotels.

Acapulco Taquería Mexicana – you’ll think you’ve gone to taco heaven when you step into this Mexican joint in the trendy Calle Loíza neighborhood. Whether you’re in the mood for chilaquiles, totopos, or tacos loaded with everything from carnitas to pollo al pastor, you’re in for a fiesta for your mouth.

During your stay in San Juan you can’t miss the local nightlife scene. The Condado neighborhood is where you’ll find most of the gay bars and gay-friendly places. Puerto Rico’s nightlife scene is exciting and the gay scene is fairly well developed for such a small island.

Tia Maria Bar & Liquor Store – yes, it’s a bar and not a liquor store, despite the name. This is a very popular bar with both locals and tourists.

SX Club – a popular club with strippers and go-go dancers. Friendly bartenders and strippers, loud music and a dance floor in the front.

The Bear Tavern – opens at 6pm so it’s a good option for evening and early night plans out.

Oasis – a restaurant, lounge and bar open all day and until late. Monday nights are popular with happy hour and go-go dancers.

Circo – San Juan’s most popular gay club offering Drag shows, go-go boys and great dancing. Depending on the day of the week, you might catch a RuPaul viewing party or even drag bingo.

Xteamworks – San Juan’s gay sauna/bathhouse. Look for the doorbell next to the steel mesh gate on the right side of the ground floor entry. It’s a bit too far to walk home, so best to take a taxi or Uber back to your hotel at night.

There are also a number of beaches in and around the city, but you’ll find Atlantic Beach is where the gays gather – mostly in front of Oceano, a gay-owned restaurant and beach hang out. Ocean Park nearby is also gay-friendly, but it tends to be full of younger crowds and college students. You probably want to keep any public displays of affection to a moderate level. During the daytime in the gay-friendly areas you shouldn’t have any problems with your partner, but like anywhere, just use your best judgment and be cautious of who’s around you. 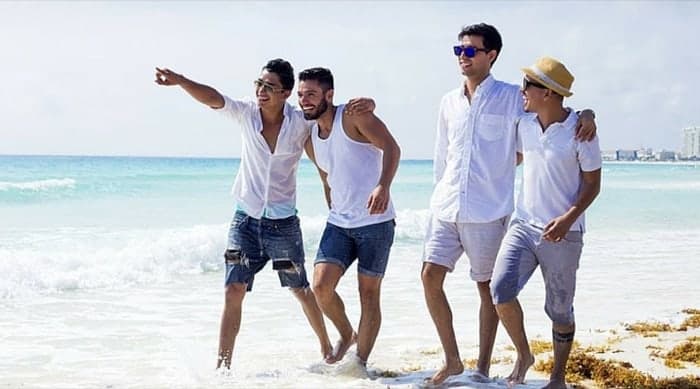 Hydro Caribbean Festival – Hydro Festival is the first gay music festival in the Caribbean. The event is relatively new on the gay circuit scene. Planning your trip around this event is a good option if you enjoy circuit parties.

San Juan Pride – the pride event takes place in June and hosts a parade plus a variety of events and parties during the weekend.

Winter Pride Fest – the only winter LGBT event in Puerto Rico offering 4 days of parties and events including a pool party, catamaran tour, drag shows and a burlesque brunch. 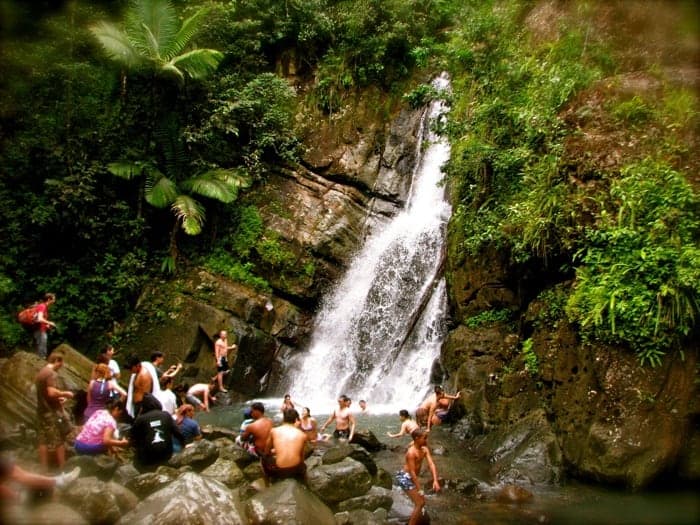 Bioluminescent Bay – one of the most unique things you’ll find in Puerto Rico is the Bioluminescent Bay on Isla Vieques. Known as Puerto Mosquito or Mosquito Bay, this destination is one of the best bioluminescent bays in the world and it’s considered a natural landmark of Puerto Rico.  When visiting the bay at nighttime you’ll find a light emerge from the water caused by a micro-organism. The water glows whenever it’s agitated, leaving a trail of neon blue light. Book tour →

El Yunque National Forest – see a unique ecosystem that has amazed visitors for centuries. Stop at the popular Waterfall La Coca, view a beautiful panorama from the Yukaho Tower and onto the Puente Roto to see the Mameyes River. Book tour →

Featured image taken by Breezy Baldwin via Flickr / CC BY.