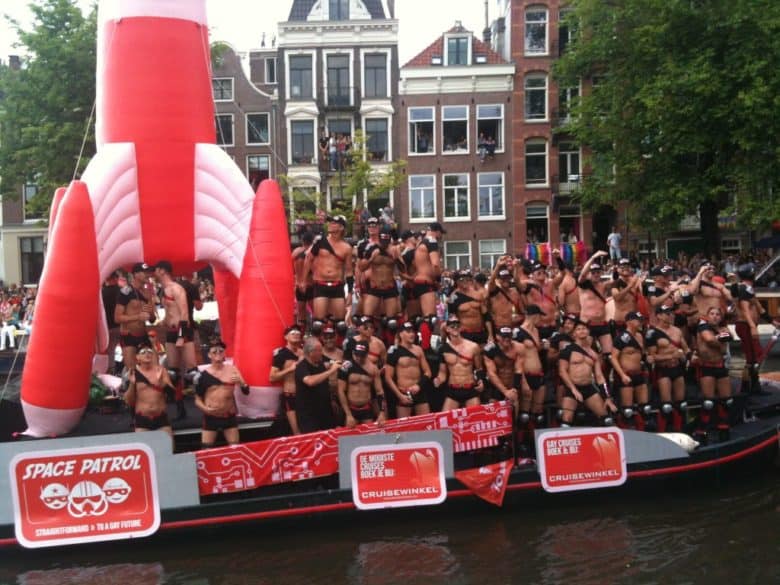 Topping the list of gay-friendly destinations, Amsterdam is an oasis for travelers who can let loose, showing their true colors in one of the most liberal-minded cities on the map. The Netherlands has a progressive history when it comes to tolerance and rights for minorities. It even set the bar in 2001 as the first country to officially recognize same-sex marriage. The city of canals boasts a compact center that makes almost everything walking distance. If you’re feeling particularly Dutch, venture out on a bicycle to admire farther sights.

After a day of cycling around town and hitting up the city’s LGBT districts, rest up for some energetic nightlife. From going to Church to Taboo, Amsterdam is packed with gay-friendly bars and clubs.

Amsterdam is probably one of the few cities in the world where the traditional idea of a gay bar is probably no longer necessary.  The Netherlands was in fact the first country in the world to legalize same-sex marriage so it’s no surprise its iconic city of Amsterdam is so progressive. Remember, this is the place where prostitution is legal and you can actually buy and smoke (or eat!) marijuana legally in places called “coffeeshops” all throughout the city including The Otherside Coffeeshop, a gay favorite place in town.

You can download the Gay Amsterdam guide for free. Just provide your email address and we’ll email you a PDF. 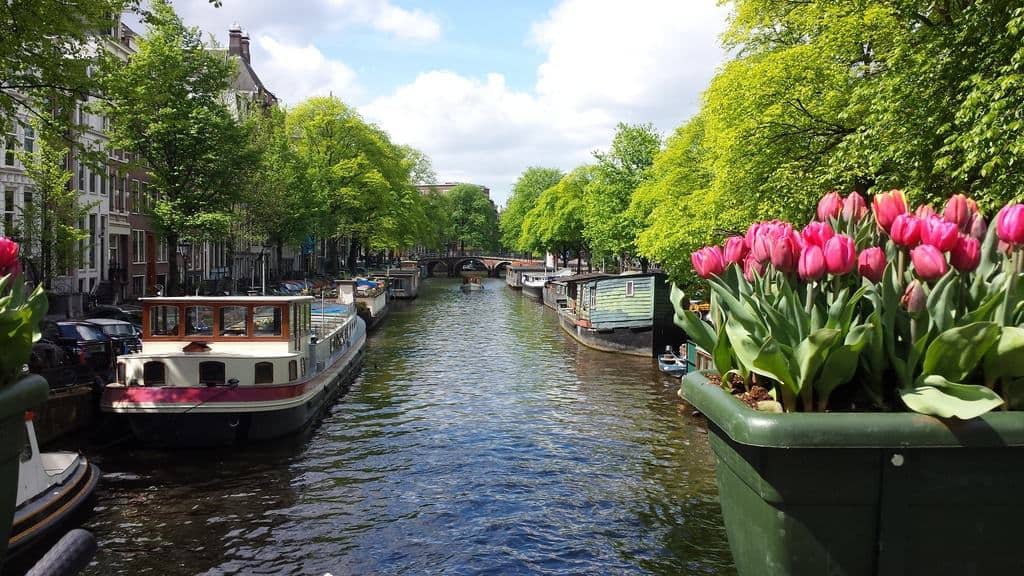 When visiting Amsterdam, it’s best to stay central which makes getting around the city’s attractions easy. There aren’t currently any gay hotels in Amsterdam, but there are many gay-friendly options.

Sofitel Legend The Grand Amsterdam – perfectly located, this 5-star luxury hotel in the heart of Amsterdam offers luxurious rooms in an unique historical ambiance with French elegance. A blend of Dutch history and French luxurious contemporary design. It features a top-level restaurant, various bars and a spa with an indoor pool area.

Lloyd Hotel – offers unique rooms in a transformed historic building. Within 10 minutes you will reach Amsterdam Central Station by tram. The iconic building of the Lloyd Hotel has spacious rooms in all shapes and sizes and every room is unique. Guests who wish to explore Amsterdam in an active way can rent a bicycle at the hotel and request a packed lunch for their trip.

NH Amsterdam – this hotel is located in the museum and fashion district and combines leisure facilities, elegant rooms and a convenient location. Amenities include a fitness center, sauna and steam bath. Guests can also enjoy a drink at the Bar & Kitchen Copper onsite.

There are many sites for apartment rentals in Amsterdam, with AirBnB probably being one of the most popular. Prices are generally comparable to budget hotels, especially if you’re willing to get a room in a shared apartment. Book AirBnB →

There are even a few LGBT-oriented booking sites like misterb&b with listings from gay hosts for gay guests where you can either rent a whole apartment or a private room in a shared apartment. Understanding Amsterdam’s gay scene is much more easily done with the help of a local and apartment sharing is one of the best ways to meet someone living in the city who knows how things work, where and when are the best nights to go out, and what places to eat at and which to avoid.

Sex Museum –The Sex Museum has been around for more than 20 years and has managed to collect many hundreds of interesting pieces of art, unique objects and rare old photographs, but avoids the bluntness of pornography to bring them together in an organized and interesting way.

Ann Frank House – the home where Ann Frank and her family lived and hid during the war. It’s a writer's house and biographical museum dedicated to Jewish wartime diarist Anne Frank. It preserves the hiding place, has a permanent exhibition on the life and times of Anne Frank and has an exhibition space about all forms of persecution and discrimination. Book tour →

Canal Cruise – See Amsterdam at its most picturesque on a 1.5-hour canal cruise by night. Discover the historic city center as you sail past the Skinny Bridge, Golden Bend, and more. Marvel at the illuminated merchant houses and learn where the local hotspots are. Book tour →

LGBT art tour in the Rijksmuseum – The Rijksmuseum and its art collection is one of the most spectacular in the world. Henk enlightens you about the Golden Age when the Dutch ruled the waves but more importantly created a vast collection of paintings that we can still admire today. Henk will point out pieces in Dutch history and the art collection that have a connection with the LGBT community. Book tour →

Discover the best of Amsterdam's LGBT scene – Join a local host on a personalized experience in which you will explore the significant sites relating to the LGBT movement. Stroll from Amstel, a cornerstone neighborhood in the city’s LGBT history to Reguliersdwarsstraat, the heart and soul of Amsterdam’s LGBT scene. Book tour →

LGBT History Tour Amsterdam – Get an in-depth look at LGBT history in Amsterdam on this walking tour with a guide who lived through the beginnings of the movement. Listen to the history of the 1980s and 1990s, when Amsterdam was the gay capital of the world, and visit landmarks important to LGBT history. With a small group, you'll have plenty of chances to ask questions and enjoy an intimate group atmosphere. Book tour →

Gaily Tour in Amsterdam – be immersed in Amsterdam’s vibrant LGBT scene on this private walking tour of the Dutch capital. Choose a time and package that works for you, then set off with your guide to learn about the community’s history, exploring neighborhoods such as Jordaan and De Wallen and hearing plenty of personalized insights along the way. Book tour → 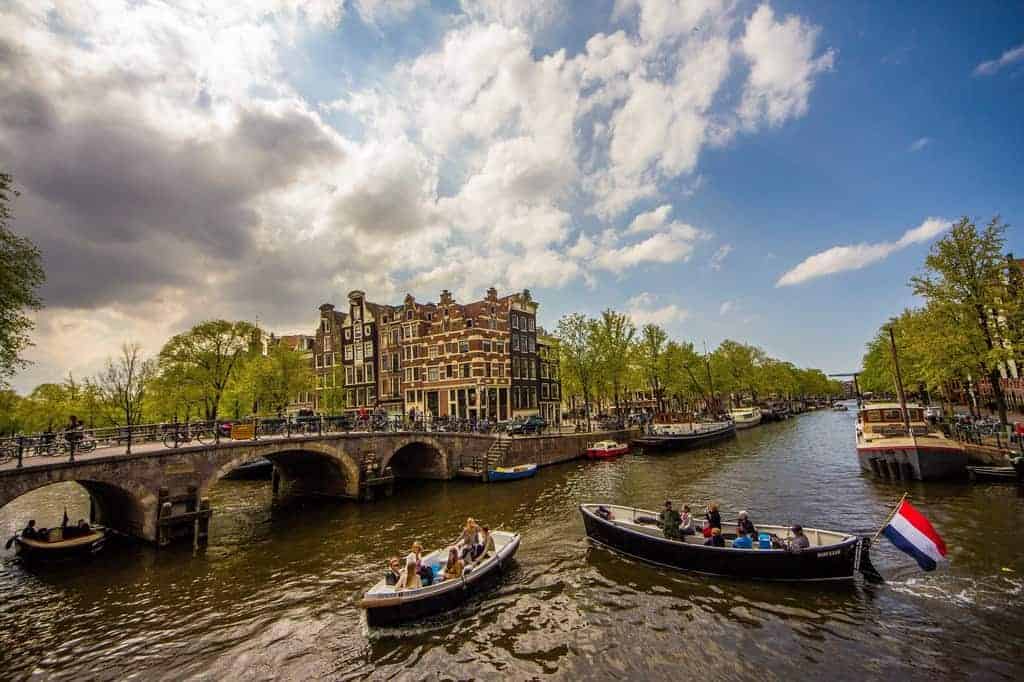 Getto – in business since 1996. The basic concept was to create a place where people could meet, drink, eat and be merry. A place with an attitude free zone for the entire LGBT and allied community. The sort of place you could visit once or three times a week and wear full leathers, dress up, dress down or bring your mom.

Café de Jaren – a bright and spacious café located in the center of Amsterdam. The first-floor balcony and sunny canal-side terrace on the Kloveniersburgwal offer views across the River Amstel. Café de Jaren owes its popularity to the quality of the food and drink it serves, the reading table, the canal-side terrace and balcony, the variety of tucked-away places to sit and the light and spacious atmosphere.

Supperclub – a place where like-minds find each other and go home with a story at the end of the night. Supperclub brings you a night full of spectacle, from an exciting 5-course surprise menu, to amazing music, exciting performances and visuals. Everyone plays a role, even you, and fills in the white canvas that is the Supperclub.

Restaurant d' Vijff Vlieghen – The restaurant is often referred to as a culinary museum. Walls are decorated with beautiful gold-plated leather from the 17th and 19th century. d’Vijff Vlieghen is situated in the center of Amsterdam and is an ideal location for a romantic dinner.

While Amsterdam may be totally gay-friendly and full of mixed places, you can still find plenty of gay places like Prik, Trut (popular Sundays) or classics such as Café ’t-Mandje (the oldest gay bar in town) where gay locals and tourists alike head out to meet, mingle, flirt and more.

There are a few specific areas of town where you can find gay places together including the popular street named Reguliersdwarsstraat. You’ll find a handful of gay bars on this street including SoHo, Taboo and Exit (Aprés Chique). The area called Amstel also has a few bars with more traditional Dutch atmosphere and style including favorites like Amstel 54 and De Lellebel, a drag queen café in town renowned for its glittering lip-sync performances.

Amsterdam’s gay glory days are probably in its past, which peaked in the 70’s and 80’s. Due to the open and progressive nature of the city, Amsterdam just doesn’t have the same type of gay clubbing scene that you might expect in other big European cities. NYX is Amsterdam’s main gay dance club and you can find the occasional circuit party hosted on a monthly basis like those put on by Rapido Events.

The other popular gay area in Amsterdam is around Zeedijk and Warmoesstraat, which is where you’ll find the fetish shops and several gay cruising bars like Eagle, Cuckoo's Nest or Dirty Dicks – perhaps appropriately located near Amsterdam’s red-light district. The gay sauna is Amsterdam is called Nieuwezijds.

Pride Amsterdam – a truly one-of-a-kind experience with the canal parade attracting over 300,000 spectators, street and club parties and a Drag Queen Olympics. The parade actually takes place on the water with spectators watching from the banks of the famous canals. Huge boats full of everything from sexy dancers to leather-bound bears pass down the waterways of the city during late summer as hundreds of thousands celebrate in one of the most open and progressive cities on the planet.

King’s Day – takes place in April in honor of the Dutch King. The main day’s activities are followed by a gay-inspired night with many parties across the city.

Rotterdam – Rotterdam is the second largest city in The Netherlands – one hour south of Amsterdam and two hours north of Brussels. It’s an incredibly modern and diverse city and is not at all what you might think when you imagine a major European city. The sightseeing in Rotterdam isn’t historic and the architecture isn’t old. But this is what makes Rotterdam stand out. This is the contrast to the rest of Europe.

Bruges – The city of Bruges owes its name to the various bridges you will find in it. It was declared a World Heritage City in 2000 and is also known as the Venice of the North.  It also has a great Medieval period architectural heritage, which you can enjoy as you walk through the city. Book tour →