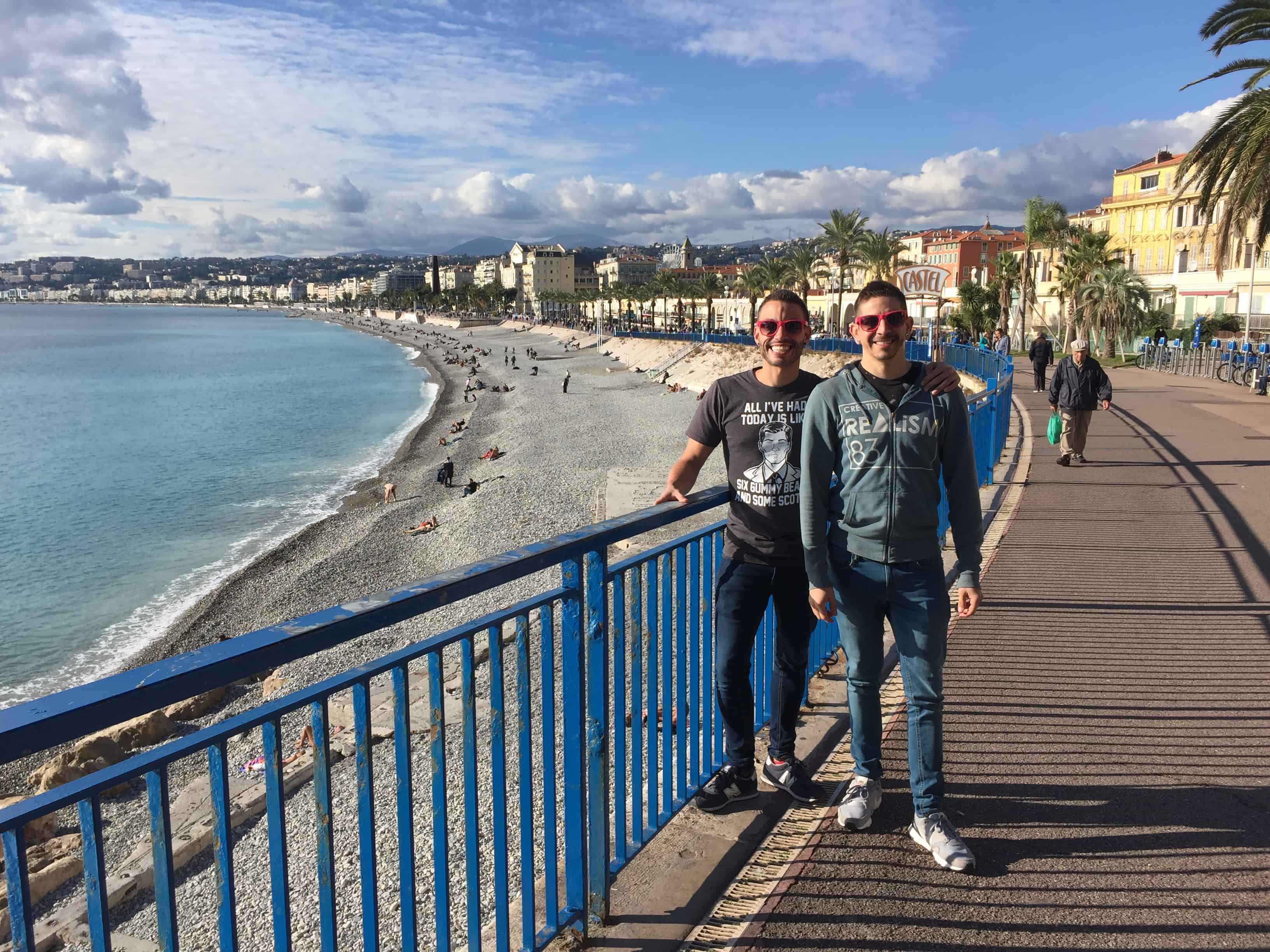 The south of France is a hugely popular destination year-round and Nice, the second largest city of the region after Marseille, lives up to the hype. As it continues to grow, the city is adding a new underground section to its charming tramway system which cuts right through the brightly colored Place Masséna. On our third visit to the city, we weren’t surprised to discover that Nice still had wonderful things to show us. With a population of around one million, the city is well known for being one of the most popular gay-friendly destinations in southern France. In addition, the delightful shops, certified restaurants serving up authentic Cuisine Nissarde (try Chez Theresa for an affordable, family owned spot or Sentimi for a certified gay-friendly Italian restaurant), vibrant markets (the Flower and Vegetable market in the Old Town of course) and annual events make it a destination worth experiencing anytime of the year. 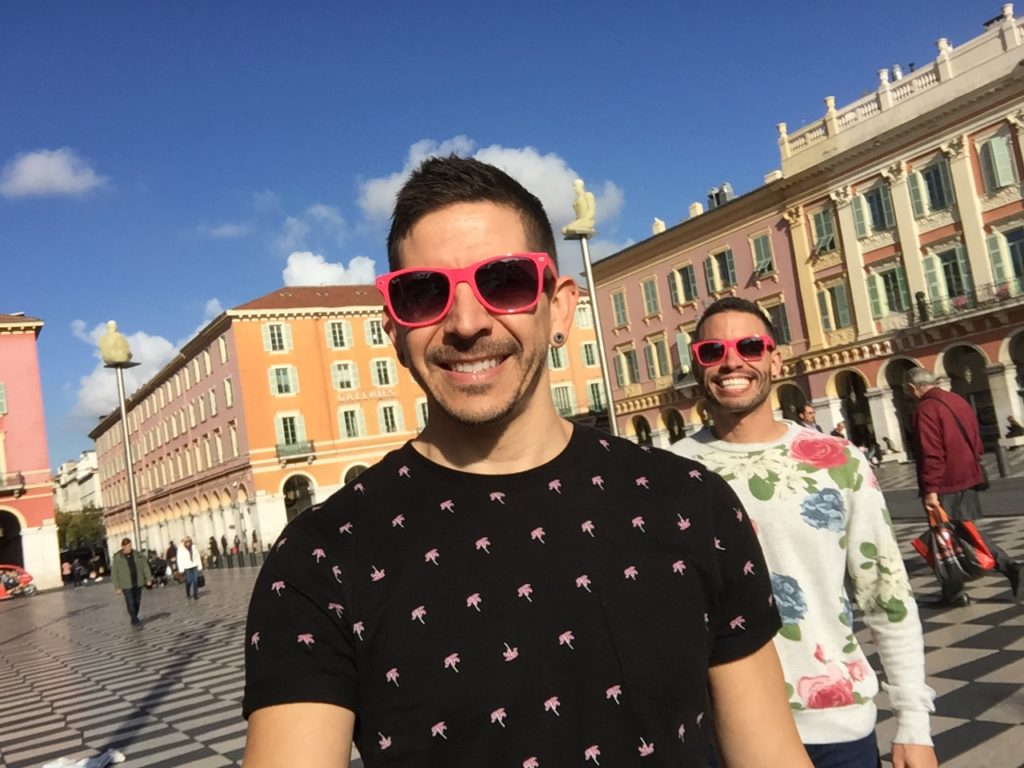 We were in Nice for the OVNi Festival (Objectif Vidéo Nice), a video art festival where various hotels and venues around the city were converted into temporary art exhibitions. It was a unique way to tour the city and peak inside curious buildings you may not ordinarily visit. Hotel Windsor, where we stayed during our weekend trip, was itself a dedicated art museum in a way with each room being designed by a different artist. Art is so integrated into the hotel that it is hard to see where the art stops and the hotel begins. The hotel hosted various video exhibits for visitors to walk through during the event. The video art exhibits expressed different themes of feminism, sexuality and other social and ecological issues while taking over the entire room of a hotel and incorporating into their expression or occupying a small space at the back of a bookshop. OVNi is a standout event for artists and art lovers taking place in November/December each year. 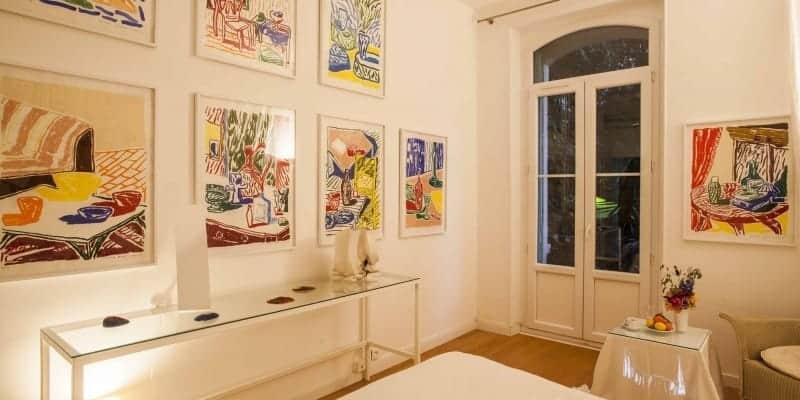 For the queer traveler, the gay scene can be found around Rue de Bonaparte, but there are gay-owned and gay-friendly spots throughout the city. On Rue Delille 3 for example, there’s the Librairie Vigna, an LGBT second hand bookstore and another exhibition venue during OVNi, which featured some gay and lesbian movies. Here we also admired work by an Italian photographer who explored how swapping male and female clothes can change the way you feel and behave. This was something that a visitor from the leather community who was also at the bookshop during our visit said he could relate to as wearing leather made him stand and walk a certain way. It was an interesting insight into his world since we were also there during a fetish event which coincidentally coincided with the art festival. They were two very different events, but both were just different ways for people to express themselves and interact with the world around them.

Nice So Fetiche was one of the more unique events we’ve attended in Nice, or anywhere really. This annual fetish event has taken place in Nice for the past three years. Leather, which in French just happens to sound a bit like the word “queer” in English (le cuir), plays a big role. Roberto Campillo and his husband are the organizers of the event which creates a space for various fetishes like rubber, leather, sneakers, puppy play and so on. This isn’t exactly a sex party so much as a weekend of social events for people to express themselves however they please while mingling with others with similar interests. It was definitely a new experience for us and we were very grateful to be welcomed into this warm and friendly community of men for the weekend. 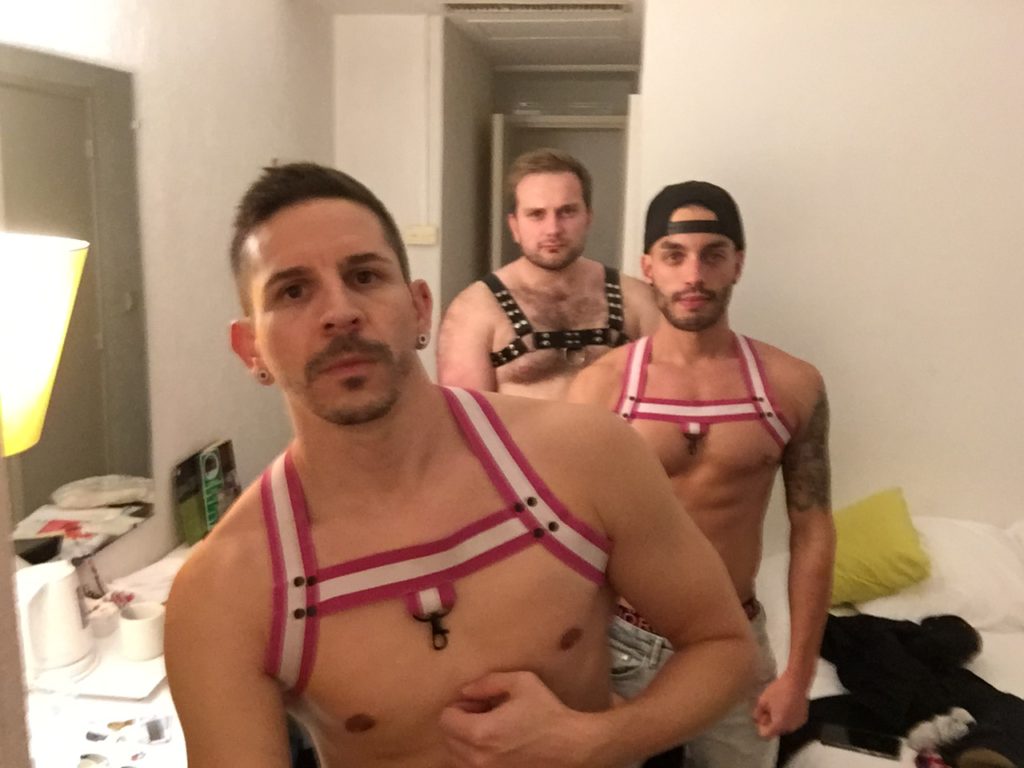 Ready for the So Fetiche party!

Nice also hosts several other annual LGBT events that make the city worth a visit in any season like Pink Parade (their gay pride) and two LGBT films festivals – Rencontres In&Out and Zefestival. Visiting Nice during these events throughout the year is a great way to experience parts of the culture that are easily overlooked in the high season. Art lovers, party-goers, activists, food enthusiasts and beach bums alike will all find Nice to be a welcoming city. For more information on queer travel in Nice, check out our Nice Gay City Guide for recommendations on accommodations, sightseeing, nightlife and dining. You can also download the gay-friendly guide to Nice here. During your visit to Nice, you can stop also by the local the tourism office for additional info, located on the seafront just next to the Hard Rock Café.

Have you visited Nice during any of these events? Which event in Nice would you like to attend?

One Comment on “Explore Queer Nice with These Annual Events”