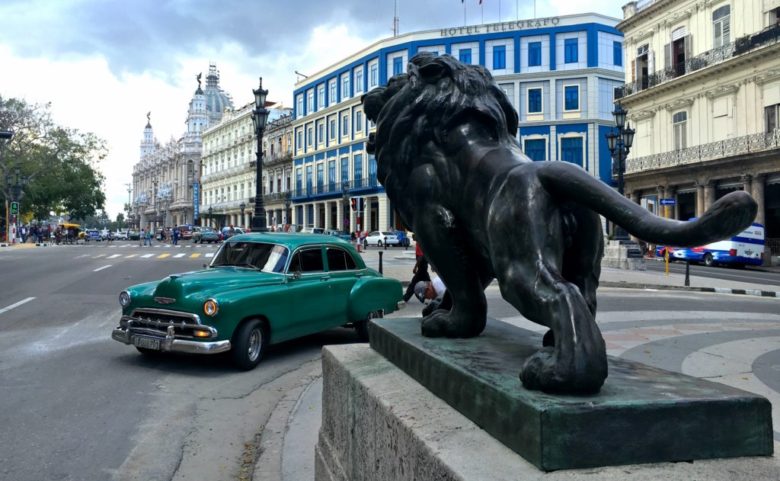 Within the past decade, Cuba has become a destination gaining more interest and the ability to access this island nation has grown. Although the political climate (particularly in the US) changes and access is affected, it's still possible to visit Cuba. Visitors from Canada or Europe can go easily and American's can go on an organized, “People to People” tour.

Though Cuba is not particularly advance in the human rights space, Cuba gay rights and equality are surprisingly more forward than you’d think for a country that’s been trapped in the past. One of the most outspoken advocates for LGBT progress in Cuba is actually the current president Raul Castro’s daughter, who has been a major ally to the local LGBT community. Though Cuba is still behind in LGBT reforms compared to other western nations, the surge in Cuba’s popularity as a destination has given rise to a number of different local tours and guides specifically offering packages for LGBT visitors.

Cuba is widely considered a safe country for LGBT travelers to visit today, with many gay travel companies offering specially curated adventures for gay people visiting the country. It has been lauded as one of the gay capitals of the Caribbean but given the pitiful circumstances in neighboring countries, this is hardly a noteworthy claim of a liberal utopia. LGBT visitors are incredibly unlikely to have any problems, even if traveling as a couple and sharing a room. 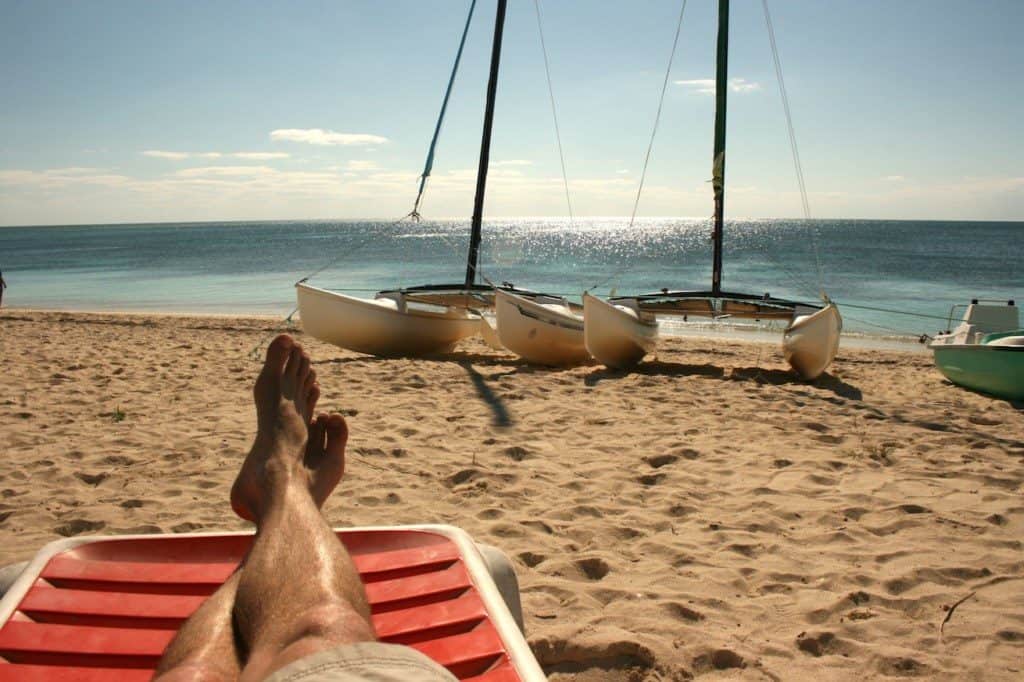 Even our friends at Out Adventures have taken this opportunity to expand their gay group tours and they are now offering 10 day trips to Cuba. We think the timing is great and we couldn’t agree more that there’s no better time than now to visit Cuba.

Though it’s now technically possible for American’s to visit as tourists, there are still some restrictions in place, which can be a bit challenging to navigate on your own. The “People to People” program is the officially sanctioned program permitting American’s to visit and if you go with the gay group tour it qualifies under the program. It’s a great option for any nationality and particularly for American’s since they help you navigate the restrictions. Flights to Cuba are typically done via a charted airline to Havana, but this is changing with some commercial flights slowly being allowed.

While Cuba is becoming more accessible as a tourist destination, it’s important to note that traveling to Cuba can be more challenging and cumbersome that most tourist destinations. Cuba has strict visa rules, internet can be difficult to find, some credit and debit cards may not work and understanding the exchange and dual currency are all things you’ll face.

Cuba was once considered one of the most regressive and closed-off countries in the world, shaded from modernity by abundant plumes of cigar smoke. Today Cuba has bridged its fractious relationship with the United States and is rapidly hurtling, for better or for worse, into the twenty-first century.

Many have romanticized Cuba, envisaging a land away from the corrosive effects of capitalism where access to healthcare and education is equal across all social echelons. However, it is easy to forget the suffering that has taken place across the decades in this Caribbean paradise. Not least for members of the LGBT community.

Cuba is famed for its torrid history on gay rights which peaked during Castro’s reign after the on-off revolution of the 1950s. Throughout the 1960s and 1970s, swathes of homosexual were sent to camps in order to be reeducated and cleansed of their gayness – reminiscent of contentious correction camps which still operate today. The state also forced people suffering from HIV/AIDS into quarantine until 1993. That is, despite homosexuality being partially decriminalized at the end of the 70s.

Mariela Castro rose to prominence in the 1990s as a campaigner for gay rights. This was a critical turning point in LGBT rights. Today Mariela is the head of the Cuban National Center for Sex Education and still campaigns on a broad range of civil rights issues. Thanks to Castro’s (Mariela that is) work, gender reassignment surgery is available through the state-funded healthcare system and discrimination on the grounds of sexual orientation is outlawed.

Back in 2010, six years before the revolutionary leader passed away, Fidel Castro apologized for the state’s treatment of LGBT people in an interview with a Mexican newspaper.

Like any country, there is a local LGBT scene in Cuba and it’s one that is slowly pushing its government to provide recognition, acceptance and equality. With the leadership of Mariela Castro, Cuba’s leading activist, the LGBT community has recently gained rights from the government in a country with a repressive past. It’s important to note that the country is still very traditional and the local population’s views of LGBT people are in many cases slow to catch up with the government’s openness to equality, but still it’s a surprising move in the right direction and one that is making noticeable strides in Latin America. 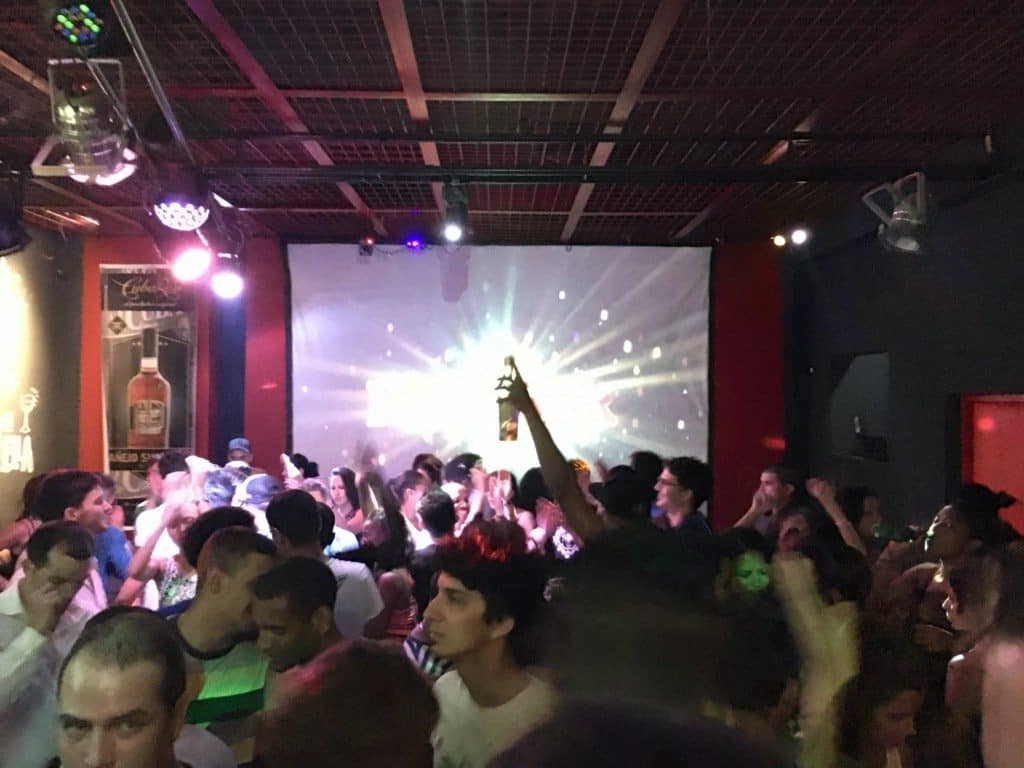 Though you’re unlikely to see same-sex couples walking hand-in-hand on the streets of Cuban cities, the LGBT scene is definitely alive and active. Like most places, the gay hotspot of Cuba is in its capital city of Havana. You’ll find the highest concentration of LGBT people in the city and this is also where you’ll find most LGBT specific venues. Though Havana doesn’t have an gay-only bars or clubs, there are a number of gay nights that take place in the city, most concentrated in a neighborhood called Vedado, adjacent to El Malecon on the seafront. Join a gay group tour or local LGBT guide and you’ll get the most updated info on the gay nightlife, including a visit to the longest-running (non-touristy) drag show in Cuba. During evenings and especially on weekends, this area comes alive with locals, quite a few who are gay and are hanging around to specifically meet other gays. Keep in mind that wi-fi isn’t abundant in Cuba, nor is the smartphone, so dating apps like Grindr and others are replaced with face-to-face meetings, social encounters and cruising on the streets.

Havana is a city unlike any other in the world and its appearance of being trapped in time is one of the many draws. It’s the largest city in the Caribbean and is considered to be one of the most culturally rich urban centers in the world. The glorious colonial past and colorful, yet crumbling architecture are just some of the highlights of the city and taking a walking tour of Old Havana is a must.

Spend a few hours with a local guide that knows the city well and if possible, you can even find a local gay guide that can give you all the best tips as an LGBT visitor. The charm of Old Havana is immediately obvious and you can’t miss historic and important sites like Plaza Vieja or Fabrica de Arte Cubano. Learn about the Cuban Revolution at the fascinating museum, Museo de la Revolucion and be sure to take a stroll alone the waterfront at El Malecon.

While Cuba’s capital city will impress you with its colonial architecture, buzzing streets and active LGBT nightlife, it’s well worth your while to head out of the city to explore other parts of the island. From Havana, you can easily visit other destinations like Trinidad or Viñales. 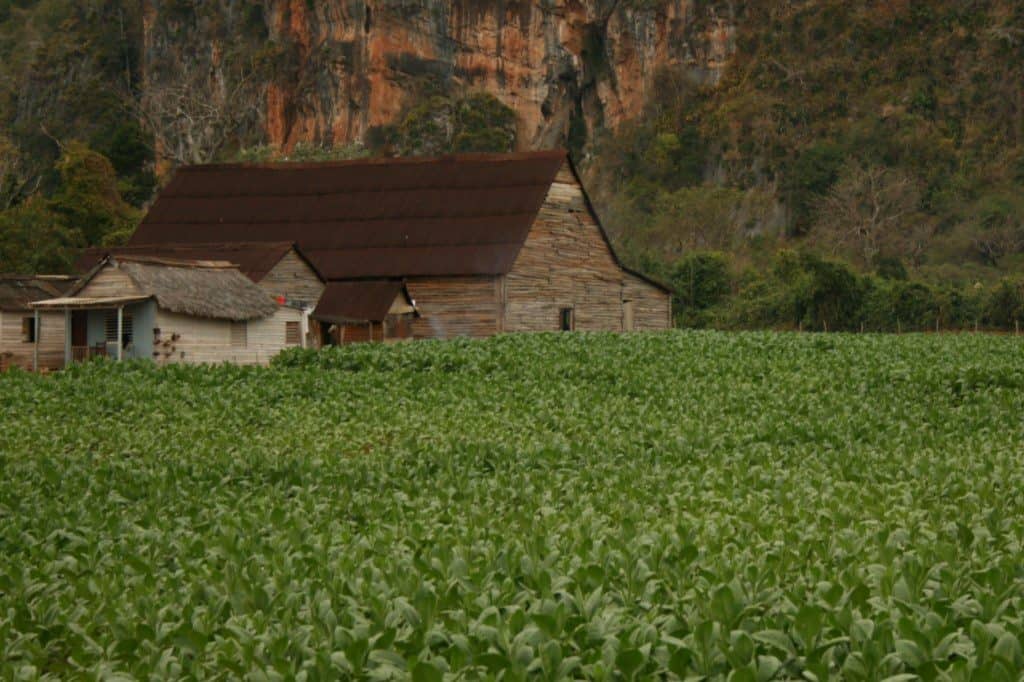 Trinidad is a colonial city and a perfect destination to dive into the Cuban culture. This city is known in Cuba as the “City that Time Forgot.” Nearly 500 years old, it’s largely unchanged from its original colonial foundation in 1514. Round out your visit with a cultural tour and some top favorite museums including the Afro Cuban temple to Yemaya. You can also try your dance skills out and learn about the cultural and social importance that dancing has to Cuba through traditional Cuban salsa. The town is also surrounded by amazing beaches that are not heavily visited, maintaining natural beauty. 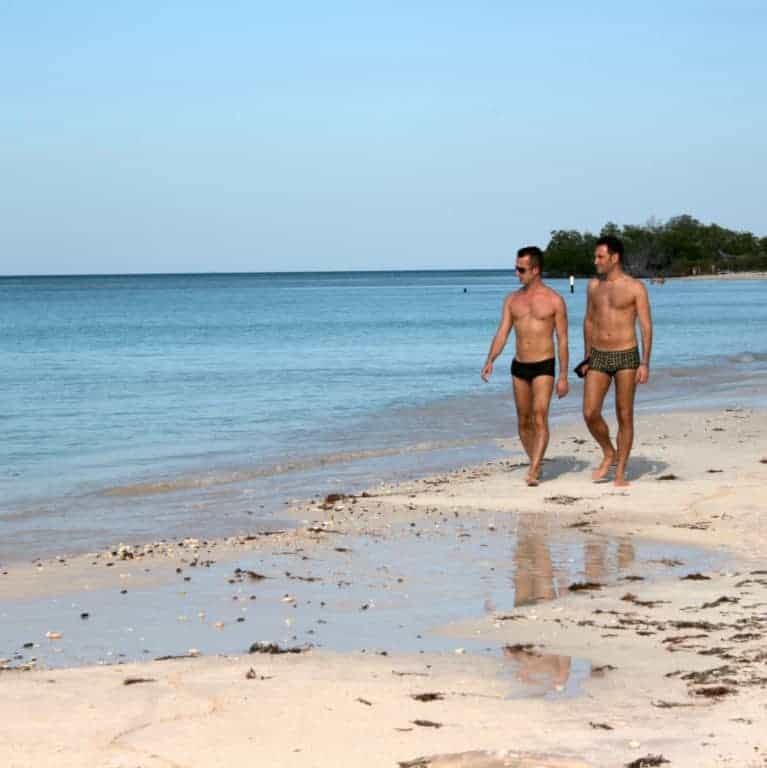 You should also consider visiting Viñales, a beautiful and lush valley with a small town on the eastern edge of the island. The area was declared a UNESCO World Heritage site and it’s an incredibly relaxed and traditional destination that’s great for immersing yourself into Cuban cuisine. In this town you can enjoy the low key vibe of the tiny town and learn to cook Cuban-style with a cooking lesson from local chefs. Go into the market to find local ingredients and cook up a traditional Cuban meal with guidance from those in the know.

Connect with Gay Locals in Cuba

Tourism is an important part of Cuba’s economy and the growth in visitors has given rise to a number of programs that allow you to connect with locals and learn about their culture first hand. If you visit on a group tour, you can even have the opportunity to join a local homestay and spend a night in a real Cuban home to see how the locals live, eat and spend their time day-to-day. Joining an LGBT focused, People to People program is also a great way to meet local LGBT figures and learn a bit about Cuba’s slow, yet progressing move to equality in this Caribbean island nation. 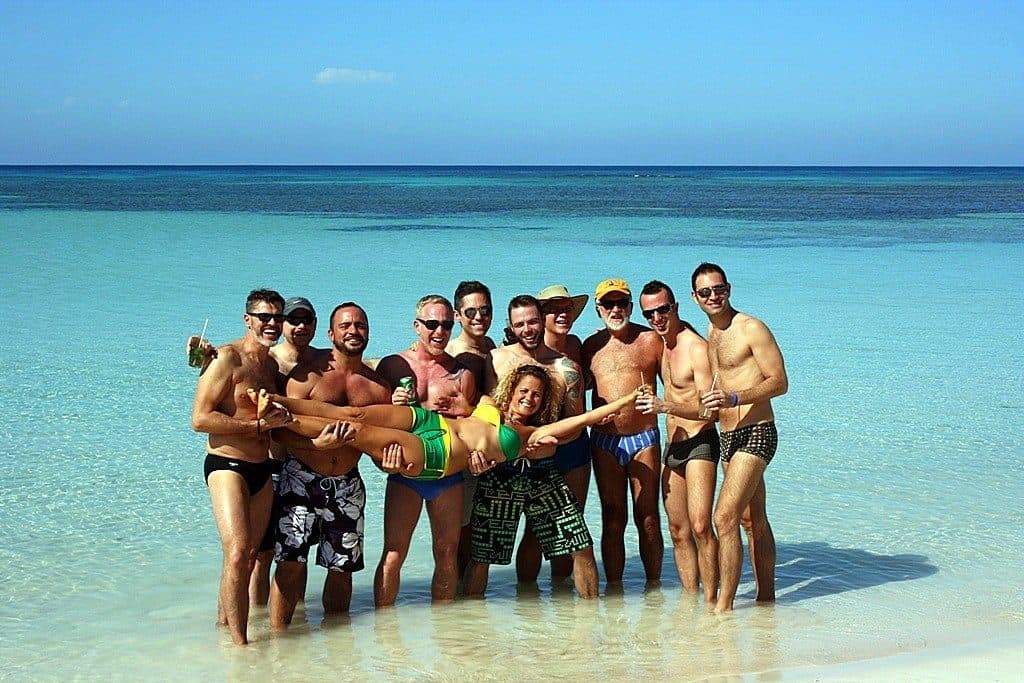 You can find out more info here about the gay group trip offered by Out Adventures. They’ve teamed up local partners and LGBT guides to offer an exclusive, 10 day People to People experience in Cuba. It’s a great way to see some amazing highlights of the island with local guides who knows all the ins and outs of this amazing destination. They’ve even managed to get special access like a behind the scenes tour of the Ernest Hemingway House, meet-and-greets with Cuban performers and a private screening of a popular Cuban gay film – just to name a few.  You can even save up to $200 on any OUT Adventures trip when booking online. Click here to request your exclusive discount code.

Would you consider visiting Cuba? Let us know in the comments below!

Note: This article was written in partnership with Out Adventures, however rest assured all opinions are 100% our own and we would never sacrifice our integrity for a sponsorship. All photos via Out Adventures.