As we kicked off our #mygaypride campaign this summer to promote Gay Pride in cities worldwide, Riga became an unusual top choice. I was surprised to hear this capital city in the Baltics to be named the 2015 destination for EuroPride, but was immediately excited by the opportunity to visit. Riga is the capital of Latvia, a former soviet country and one of the three Baltic countries along with Estonia and Lithuania in northeastern Europe. Riga was recognized as the European Capital of Culture in 2014 and its historic center is a UNESCO World Heritage Site. With its architecture resembling many Western European cities, you’d almost forget you’re in Eastern Europe while visiting its city center.

When I arrived at the Mercure Hotel the weekend of EuroPride, I wasn’t sure what to expect of the city or its take on EuroPride. I arrived alone as Auston was flying in with AirBaltic from Barcelona and meeting me there straight from his trip in Argentina. If you visit Riga, chances are that you’ll fly AirBaltic since they offer the most flight connections from around Europe. Rates are affordable as they’re a budget carrier but still with a focus on service.  I checked in at the front desk of the hotel and I gave the clerk Auston’s name as the reservation was in his name and then handed him my own identification. I cringed as he said, “I see you have a single king bed. Would you like two separate twin beds?”

I understand that he was just trying to do his job and be accommodating to his guests. But at the same time, whenever that happens it sounds like “You two are both men so I’m sure you’d like separate beds.” This was my first impression of the gay-friendliness of Riga and it wasn’t terrible, but it wasn’t great. On top of it all, I was there for an international LGBT event. Were hotels not expecting an influx of queer travelers? Apparently not. However, our stay otherwise at the hotel was perfectly acceptable. 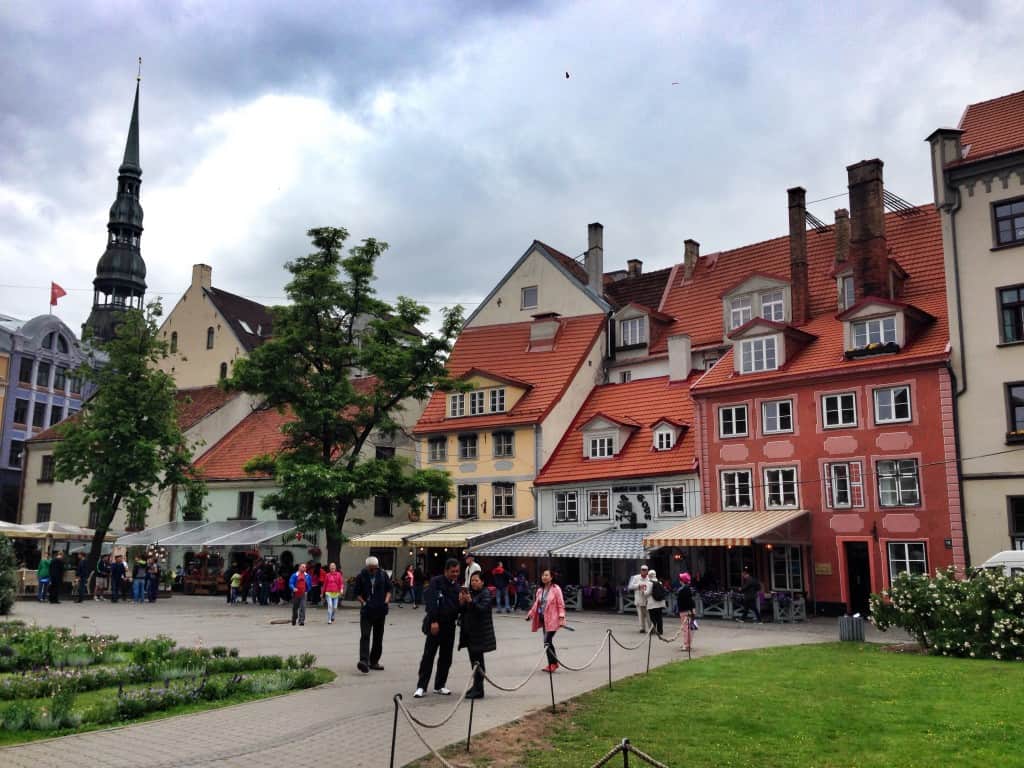 Later the same day I was off to meet my tour guide along with other #mygaypride team members, fellow travel blogger Adam from Travels of Adam and Jamie from Gay Star News, our media partner for the campaign. Our tour guide whisked us away to see the old town of Riga. She showed us where Audēju street intersects with Valnu street, a pedestrian area with a large shopping center called Galerija Centrs and more trendy shops around along with various restaurants. We continued meandering through the brick streets lined with brightly colored, well cared for buildings of businesses with apartments above. Eventually we ended up at St. Peter’s Church where you can head to the top of the tower for magnificent panoramic views of Riga. Just across from the church is the Town Hall Square where the Live Riga tourism information center is to pick up lots of information. There is also the Town Hall, the Latvian Occupation Museum, and a plaque to recognize the square as the first spot where supposedly the first Christmas tree was decorated 500 years ago.

As we continued admiring the charm of Riga’s Old Town, I couldn’t help but notice people dressed up in traditional clothing with rings of flowers on their heads. Apparently we had arrived just before the start of the midsummer celebration known as Jāņi which is a two day event starting on June 23. We also learned about other Latvian celebrations like their two independence days — one being their independence from German and Russian occupation in 1918 and the second being their independence from the Soviet Union in 1990. 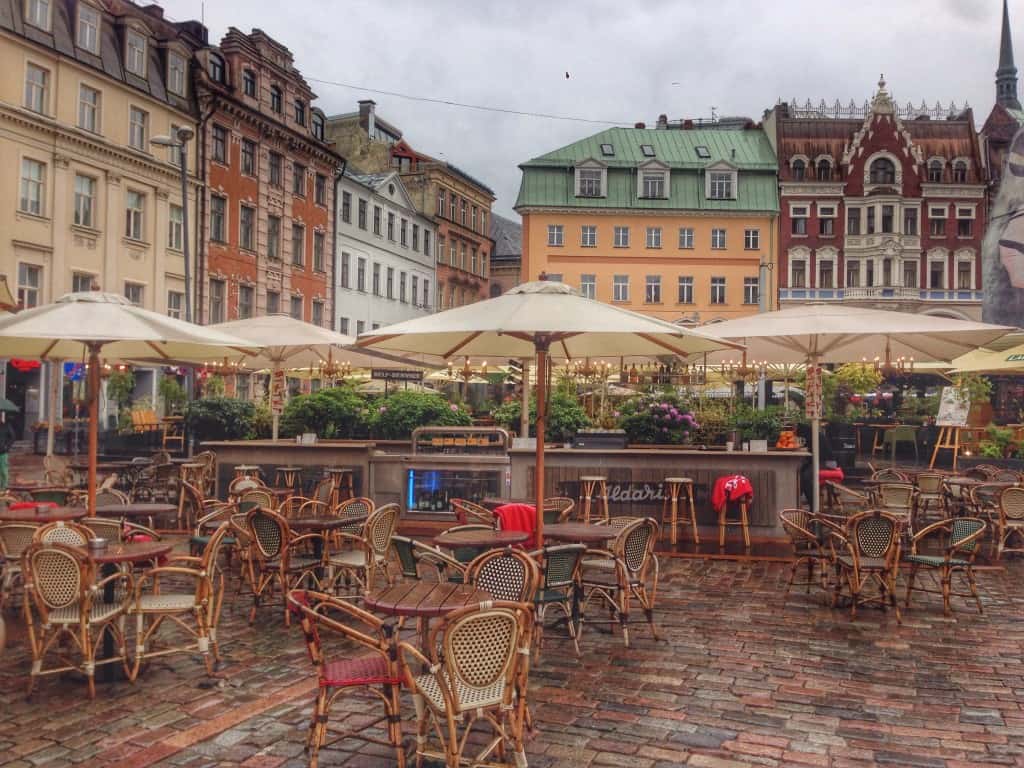 For dining that evening, we enjoyed a nice meal at Kolonade, a restaurant serving up Latvian and international cuisines. Its window covered walls give a beautiful, naturally lit ambiance that allows you to enjoy the green scenery surrounding the restaurant. That night it was time to check out the gay scene starting with Golden, one of Riga’s two gay bars. As you enter Golden, you walk up a set of stairs and at the top you’ll find a calm bar area to your left and a fair sized dance floor to your right. We had a great time dancing and socializing here. The music was great, the staff was friendly, and the crowd was fun. Riga’s other gay bar is XXL. This is definitely more of a cruising place catering to a particular crowd. However, it does have a good spot to dance, a chill bar area, and nice staff. The same owners even operate a small gay hotel if that’s your kind of thing.

The next day was filled with official EuroPride activities including the Pride parade and the Pride park at Vermanes Park. As we marched along the streets in good spirit I noticed all the police forming a blockade of protection around us. That’s when I realized that this march was a big deal and that our safety needed to be ensured. In the end, there weren’t many incidents other than a few protesters doing obnoxious things like throwing a couple objects (an egg and a bottle) and burning a rainbow flag. While these were inconsiderate and hurtful acts, they did nothing to stop the pride felt in Riga. In a city that normally sees around 800 people turn out for Pride every year, EuroPride’s 4,000-person turnout was a great experience. 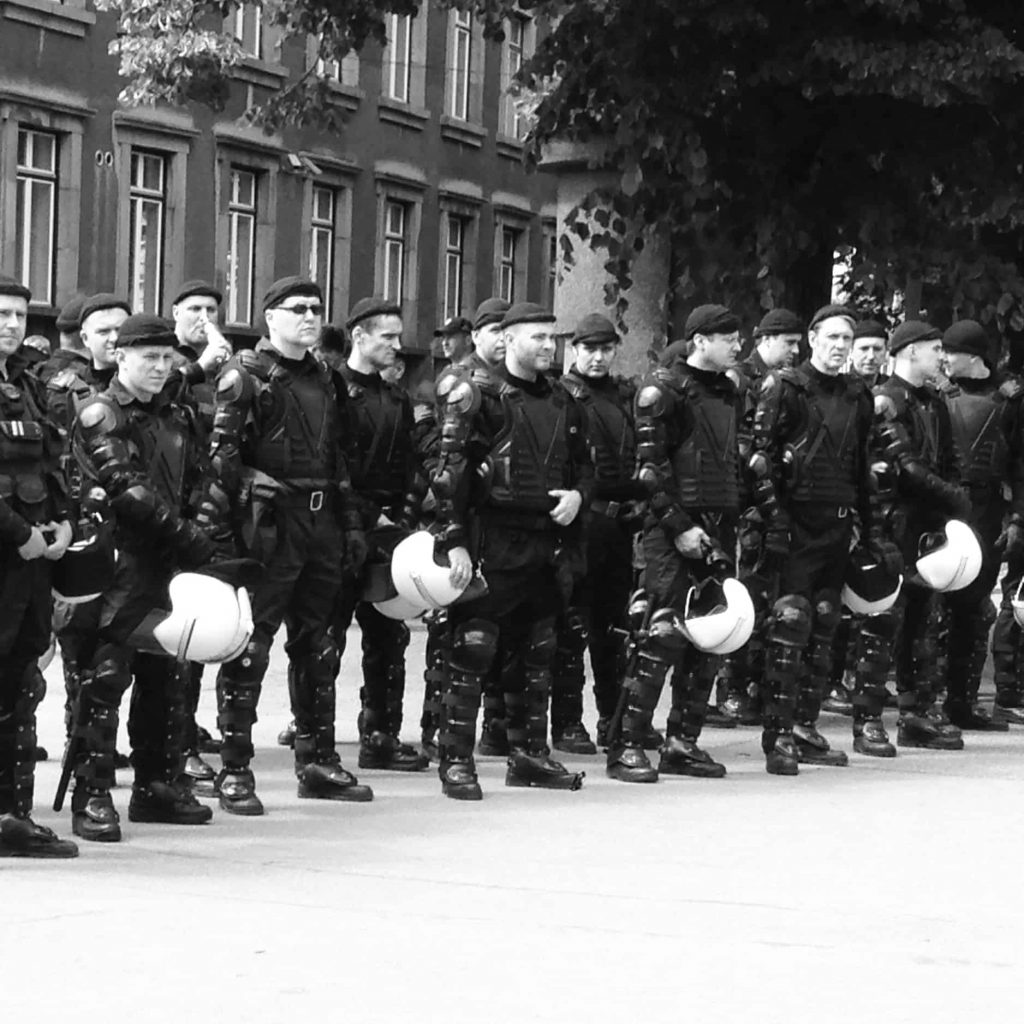 The Pride festivities were soon followed by another great meal at Valter’s restaurant where we devoured more delicious Latvian cuisine. This restaurant focuses on Latvian rural products with very little items coming from outside the country. That night was the official Pride party at Palladium with Steve Grand as the headliner. I’ve never been a Steve Grand fan per se because, well country music is country music. I don’t care if you are a gay country singer or not. But he definitely worked the crowd well to my surprise. Plus he’s oh so nice to look at!

The following Sunday was our last full day in Riga and we decided to check out the central market for a bite to eat as previously suggested by our tour guide. The market is a row of four interconnected, dome-shaped buildings that are quite plain looking from the exterior, but inside is a large open space market filled with locals going about their day and visitors there for an experience. Its filled with an intense mix of aromas from the various stalls selling all sorts of food products including fruits, vegetables, fish, meat, and cheeses as well as others selling local crafts. This is a great place to get a glimpse of local life and grab a bite of cheap and delicious local treats. We capped off the evening by grabbing a drink at the Panorama Restaurant & Bar at the top of the Radisson Blu Hotel. An appetizer and a cocktail here is the perfect compliment to the sweeping views of the city. 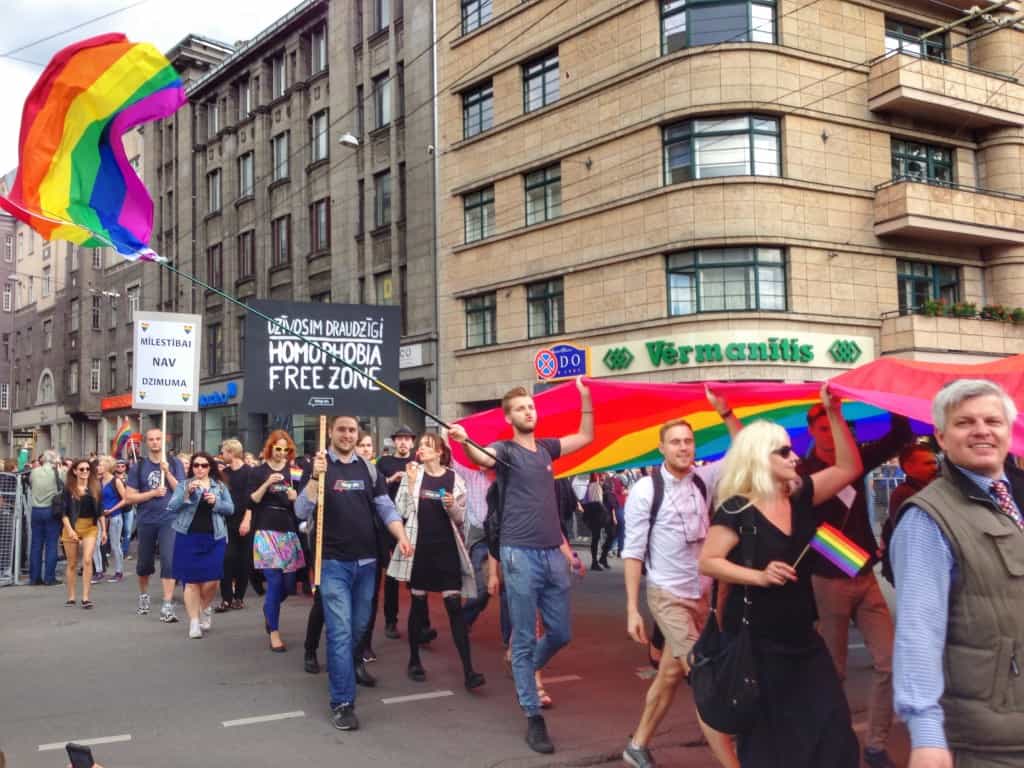 After our quick exposure to this charming and inviting Latvian city, I can easily see it as a great, unforeseen destination for gay travelers. It’s not nearly as gay-friendly as its Western European neighbors, but it’s making strides in that direction and EuroPride helped to take it another step. It’s a delightful city filled with distinct culture, great dining, historic sites, and modern luxuries in a surprising and unexpected location. The gays can seek out their own in the gay bars and also feel comfortable, while being somewhat cautious, enjoying all the city has to offer to all its visitors, gays and straights alike.

So what do you think? Is Latvia and its capital city of Riga a place you’d like to visit?

Note: our trip was sponsored by Live Riga with flights provided by AirBaltic in collaboration with EuroPride Riga. As always, rest assured all opinions are our own.

6 Comments on “Is Latvia a Destination for Gay Travelers?”