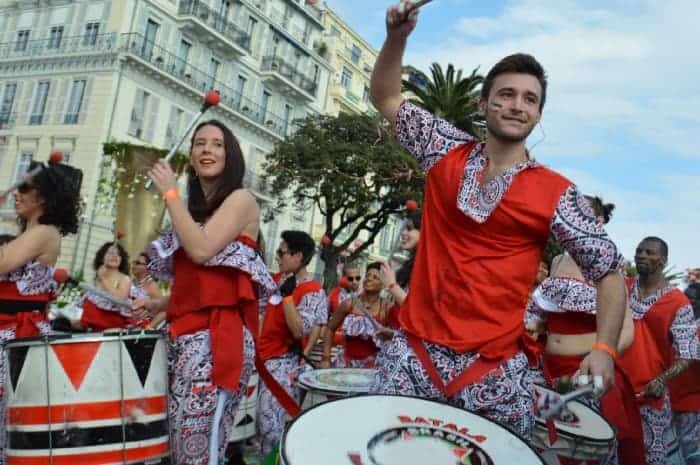 As I sipped my gin and tonic in the lavish bar of the Ellington Hotel, I couldn’t help but think how excited I was to return to Nice. Nearly two years later, I felt like I never really got to know the city. And even better, later that Friday night we were headed to Place Masséna, the main square to watch the first Gay Carnival event (called Lou Queernaval) in the history of more than 130 years of Carnival in Nice.

Costume, check! Glitter and confetti, check! Excited for the parade and seeing the nightlife afterwards, check! Previous knowledge about the history of Carnival in Nice and what Lou Queernaval was all about….no f*cking idea! But I was about to get the inside scoop since we got to meet the team organizing the event.

As we were chatting with Erwann, the announcer for the night’s event, before dinner I finally blurted out, “What exactly does Lou Queernaval mean?” I’m not really the journalist type that does his research in advance when visiting a place, so I was certain everyone else in the room knew except me and that this was indeed a stupid question. “It just means The Queernaval,” he said. “Of course it does,” I thought…stupid question confirmed. 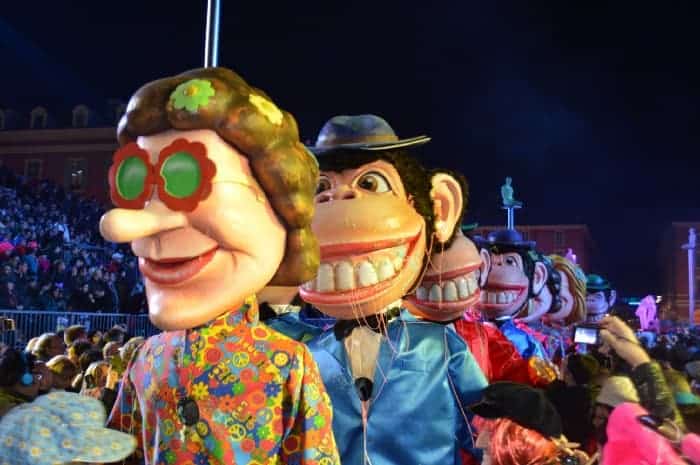 But he then explained that “Lou” is actually the Nissart (Nice’s regional language) word for “the” and that the organizers named the event this way so the residents of Nice could find a local identity in the name. Ok, so stupid question it was not, as clearly the rest of my group had no idea either. He added, “Even French people outside of Nice probably wouldn’t understand the meaning.”

Yes, Nice has its own regional language and to be honest, it doesn’t even really feel French to me. As you walk the streets of the old town, you’re surrounded by bright colors, Belle Epoque, Art Deco and Neo-Classical architecture and an outdoor café culture that feels very Italian. In fact, Nice was actually part of Italy in earlier generations and had been an independent region for hundreds of years before that. But while almost no one in the area speaks Nissart anymore, you’re subtly reminded of the history as all the street signs in the old town are marked in both French and Nissart. 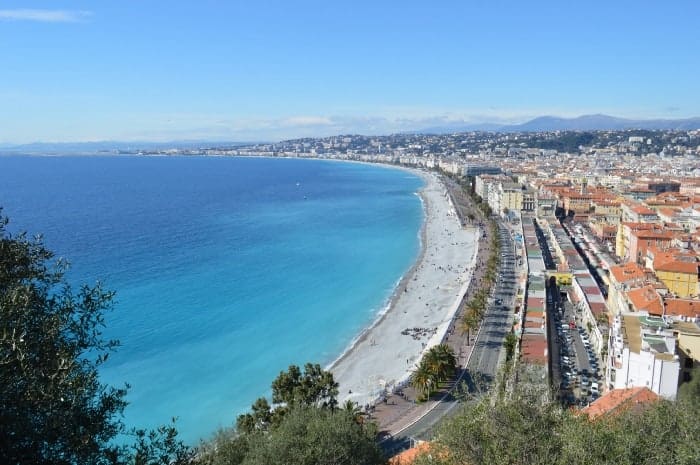 When you think Carnival, Nice is probably not the first place that comes to mind – does it even come to mind at all? You probably conjure up images of elaborately dressed dancers competing in the parades of Rio de Janiero, the largest and most famous Carnival in the world taking place during six days in the blistering Brazilian summer in February. But as it turns out, Nice’s Carnival is the 3rd largest in the world by the number of visitors and it takes place over 17 days, with Lou Queernaval happening the final weekend this past February.

It had the feeling of a Carnival parade but with a sprinkling of glitter, drag queens and shirtless men rocking six packs. 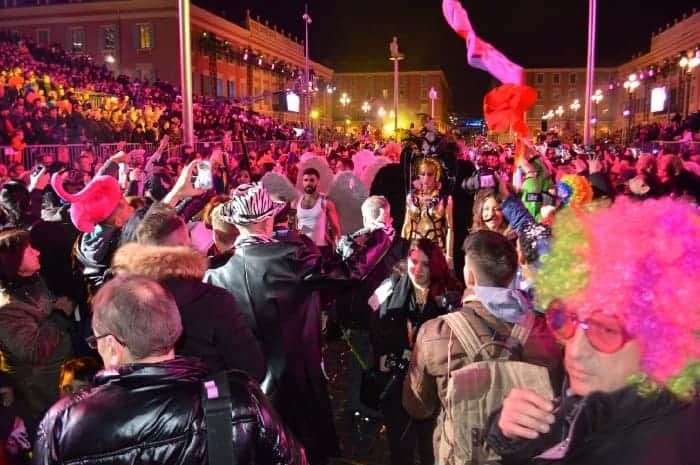 A massive stage, seating for thousands of viewers and an elaborate light and sound system exemplified the event. At 9pm sharp, Erwann, half dressed in drag, began announcing the 1st Queernaval in both French and English. Shortly after, the Carnival parade began with Mr. Gay France, Armando Santos, dressed as an angel and leading the procession. It had the feeling of a Carnival parade but with a sprinkling of glitter, drag queens and shirtless men rocking six packs. Not completely unlike a gay pride parade, but it was definitely different as the focus was truly Carnival. 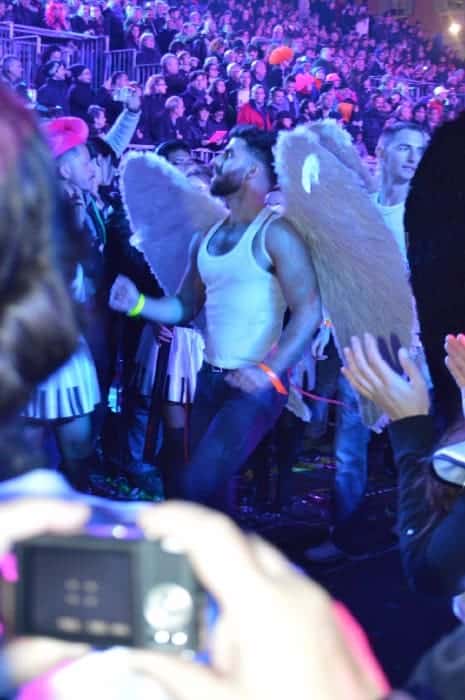 The event was fun, entertaining and drew a crowd much bigger than I imagined, and apparently bigger than the organizers expected as well. The creation of the event was a grassroots effort by leading members of the LGBT community to gain recognition and increase visibility in the yearly Carnival tradition. The program was incredibly well organized and the city eventually got behind them with strong support. 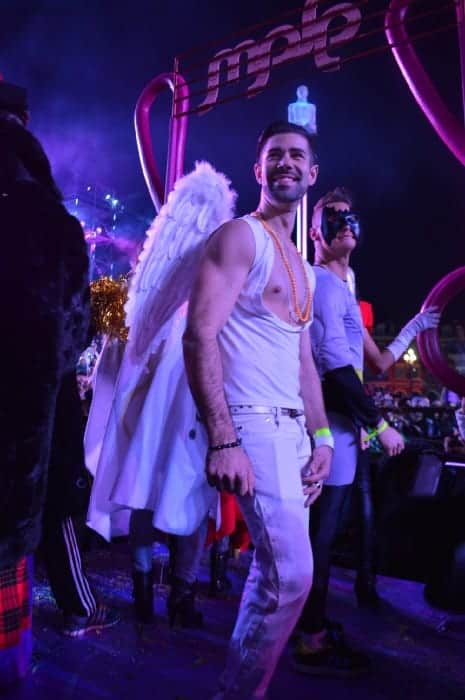 How It All Came Together

I was also surprised to learn how big the LGBT community is in Nice and how truly gay-friendly the city is. Sure, David and I visited Nice briefly in 2013 but we didn’t stay long nor did we take much time to explore the gay scene. As it turns out, Nice has a thriving gay scene which was evident by the crowd at Le Glam at 4am – a local gay club hosting the most popular Queernaval party of the weekend. And with dozens of gay business catering to LGBT people including bars, clubs, saunas, hotels and restaurants, it’s amazing how this city of less than 400,000 has such a large offering. Institutions like Bar Bitch and Bar Butch proudly keep their doors open as gay establishments in the old town while many other business are thriving on Rue Bonaparte, now considered the new gay street in Nice. 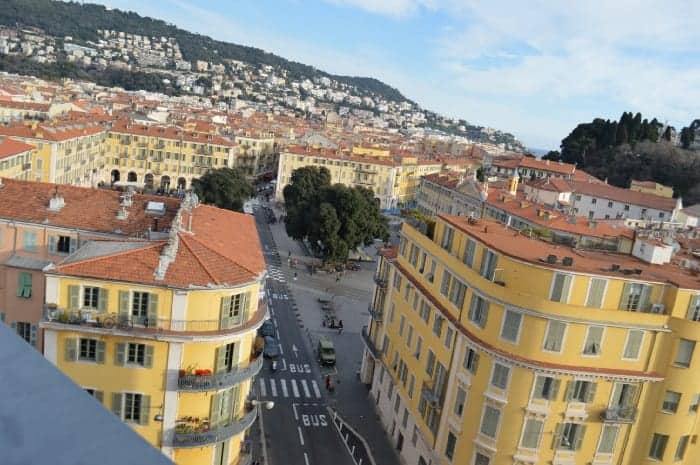 Nice is not just the playground of the rich and retired anymore as some people might think. Nice’s old reputation is truly different than the city it has become over the past decade and it’s easily one of the most gay-friendly cities in France probably second only to Paris. So whether you decide to visit next year for the 2nd edition of Lou Queernaval or if you plan your trip sooner, you surely won’t be disappointed with this beautify city, the amazing clear blue waters that line the coast and the friendly and welcoming atmosphere that will leave any LGBT visitor happy and wanting to return.

Have you ever considered a trip to Nice before? Would a visit during Queernaval even more motivation to go? Let us know what you think in the comments below!

Note: The Nice office of tourism sponsored my visit to Queernaval. As always, rest assured all opinions are 100% our own. In fact, we highly recommend visiting Nice whether during Carnival or in any other season and this 2nd trip really makes us want to visit a 3rd time!

3 Comments on “Carnival Turns Gay for the First Time in Nice, France”