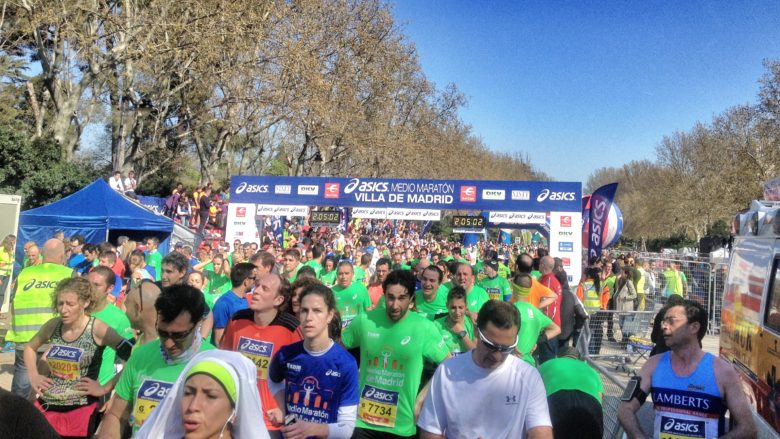 Ten kilometers. The bright yellow marker on the side of the street tells me that I'm almost at the halfway point. I continue on, crowded among the other runners feeling a bit like cattle being herded among the streets of Madrid. There were over 20,000 participants in this year's Half Marathon and I, along with my friend Luis, decided to partake. As we're nearing the halfway point of our 21 kilometer run, I felt a tingling sensation in my leg and mentally debated whether giving it a short break or pushing through would be the best option. I wanted to challenge myself, but I most certainly did not want to injure myself.

This small decision on how best to care for my body brought with it a wealth of old memories as I lost myself in my thoughts during the run. I've been a regular runner for just over ten years now. Starting in high school, jogging became my main form of exercise when I decided I was tired of being chubby. I was never very fat, but neither was I comfortable taking my shirt off when swimming. So running was my best option as I wasn't ready to join a gym either. I really grew to love the sport as it wasn't just a way to keep myself in shape, but it also became a way to clear my mind and think about the various things that would cloud my head during a long day. 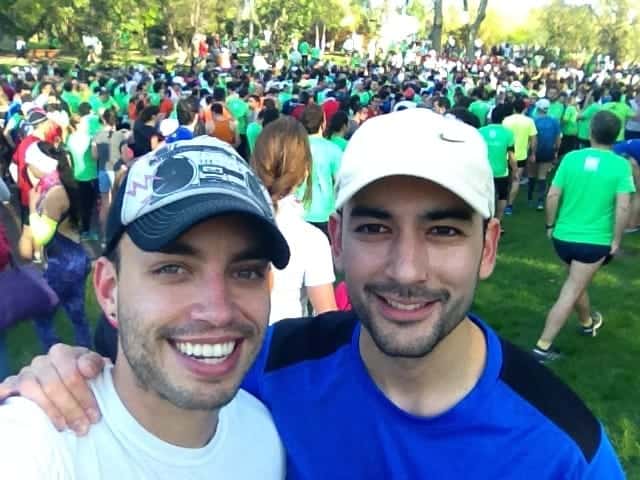 When I foolishly became a regular smoker in high school and the beginning of college, running was also my motivation to quit. I knew I couldn't do both. If I was going to be a runner, I would run only. If i was going to be a smoker, then smoke I would. But together, they did not go. It was an easy decision. Plus, when I started dating Auston he would have nothing to do with cigarettes.

So I continued to run regularly for the past ten years. It aided me when life was stressful, and has always been a good workout option when a gym was not available. I've jogged on small trails through farmland in Ghana, in polluted city parks in New Dehli, and along beautiful coastlines in Barcelona. Naturally, completing a half marathon became a life goal of mine, but one that sat on the back burner until this opportunity to go for it arrived in Madrid when my friend Luis told me he was going to do it.

As I lost myself in my thoughts midway through the half marathon, I thought about my brush with cancer and I felt very grateful to be running. I don't talk about it often because I don't like the heavy weight the word carries and I don't like to consider myself a survivor. My brief experience with cancer was nothing compared to others who have gone through intense treatments to overcome the disease. All in all, I was quite lucky. And while I don't prefer to dwell on the experience, that day during the marathon I just felt like it was time to process it a bit more.

In October of 2008, I had just moved to Chicago. Auston and my sister would join me a few weeks later, but I had to go on my own first because my first semester at Rush University was beginning. I was sitting on the couch in our new apartment one night talking with Auston on the phone about how things were going. As I placed my hand on my left inner thigh, I felt a solid bump that I'd not noticed before. I told Auston about it and we obviously agreed I should go to a doctor. The whole time I was not concerned, thinking it must be some sort of fluid buildup or something that just needed to be drained. I have no idea why that was my thought, but cancer just wasn't on my mind.

I got on the train back to my apartment, played music on my iPod and cried. At this point, like most people, I was thinking worst case scenarios. It's never a good place to put yourself but somehow still a natural reaction. As Christmas was nearing and I planned to be in Arizona with my family for three weeks, I scheduled the surgery with a doctor there so that I wouldn't have to change my travel plans and I'd have the added benefit of being with my family after surgery. 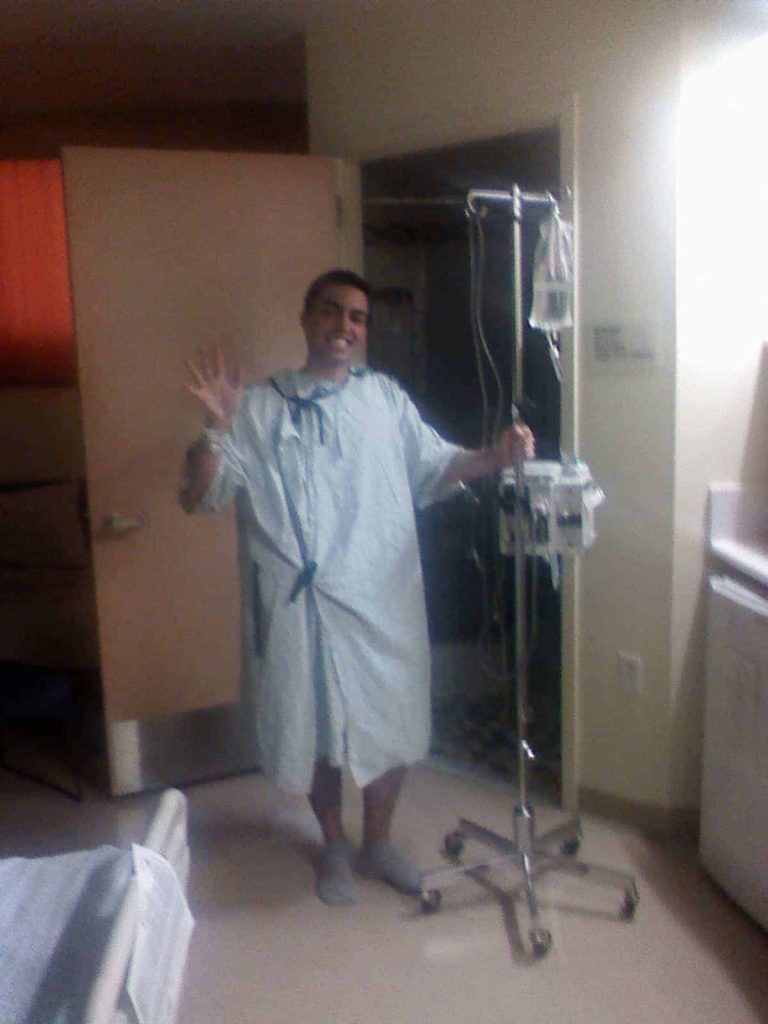 After surgery in Arizona in December 2008

At one of the first appointments, I was sitting in the waiting room with my mom, another woman and her child. While we were waiting, the other woman turned around and asked if I was a survivor, her child obviously having cancer. My eyes opened widely at such a blunt question and I softly shook my head to say no. I realized that because I was seeing a pediatric surgeon (turns out it wasn't so easy to find a doctor who could do the surgery in my limited time frame while in AZ) she must have thought I had cancer when I was younger and following up with my pediatric doctor now. I felt like she was looking at me for hope and I felt sorry that I could not provide it. 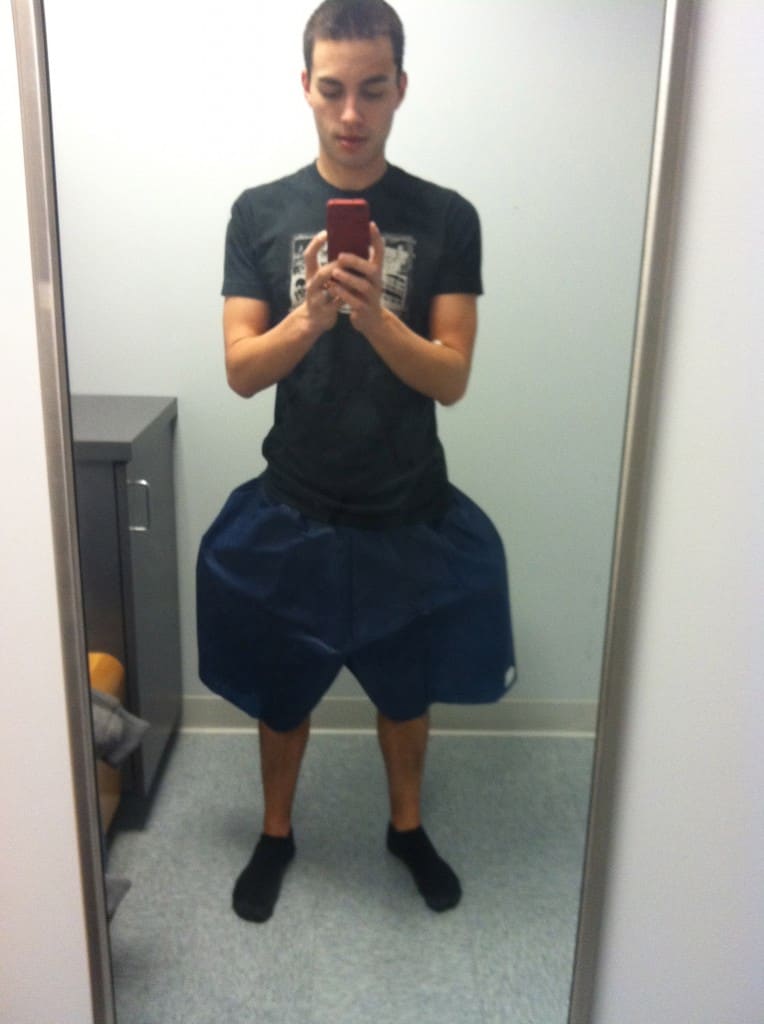 A few moments later I left the waiting room for my consultation where the doctor discussed the situation with my mother and me frankly. The surgery to remove the tumor from my left inner thigh looked positive, but like any medical situation, you never know until you know. He told me that the worst case scenario would be amputating my leg. I was a little shocked to hear that, but honestly, my first thought was, “That's fine. Do what you have to do. I just don't want to die.” Luckily for me, everything turned out with best case scenarios. My surgery was successful and they removed the entire tumor, though lab results confirmed that it was malignant and I quickly found an oncologist and radiologist in Chicago to continue treatment. I had six weeks of radiation on my thigh the following summer, but thankfully I avoided chemotherapy. So I really couldn't complain much.

Fitting radiation into my busy school schedule wasn't much of a challenge since Rush University is also a medical center. So I went to radiation treatment in the mornings on site, crossed the street to go to classes during the day, and worked part time at another hospital in the evenings. I was exhausted, but things were going well. Over the course of a few weeks my thigh began to look like I was charring it on the grill every morning. It was difficult to sleep with and I wouldn't permit Auston near me or my leg at night. Walking was a bit bothersome as the chaffing was uncomfortable. But by and large, I could manage it and I didn't complain much (I think, you'd have to ask Auston though). Things could have been so much worse and I knew it. I never let myself forget that I was very lucky. 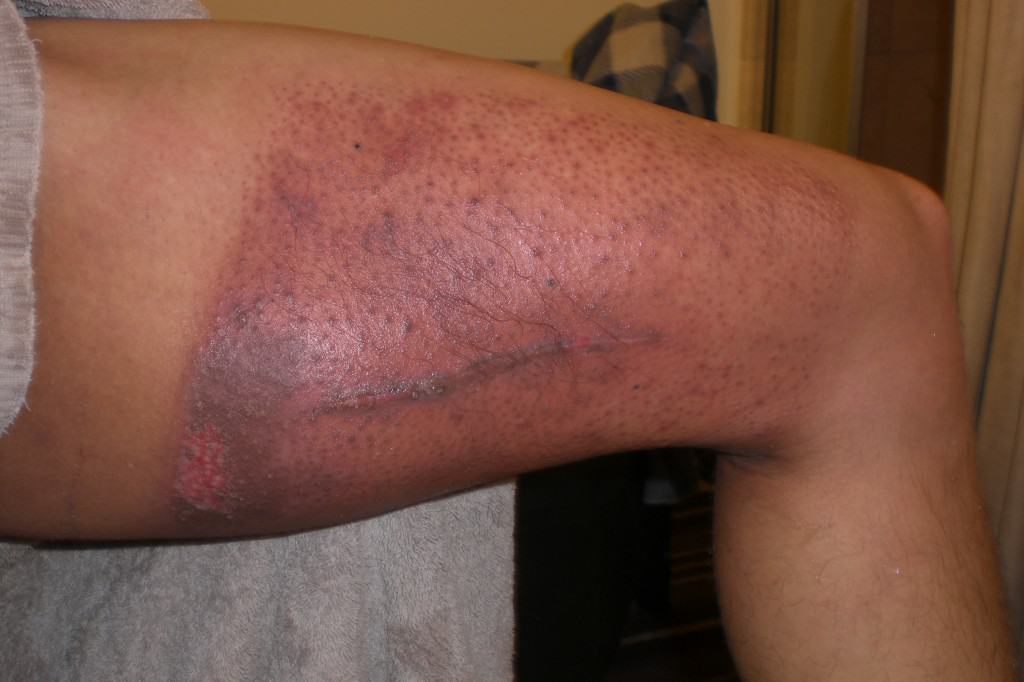 My thigh during radiation treatment in June 2009 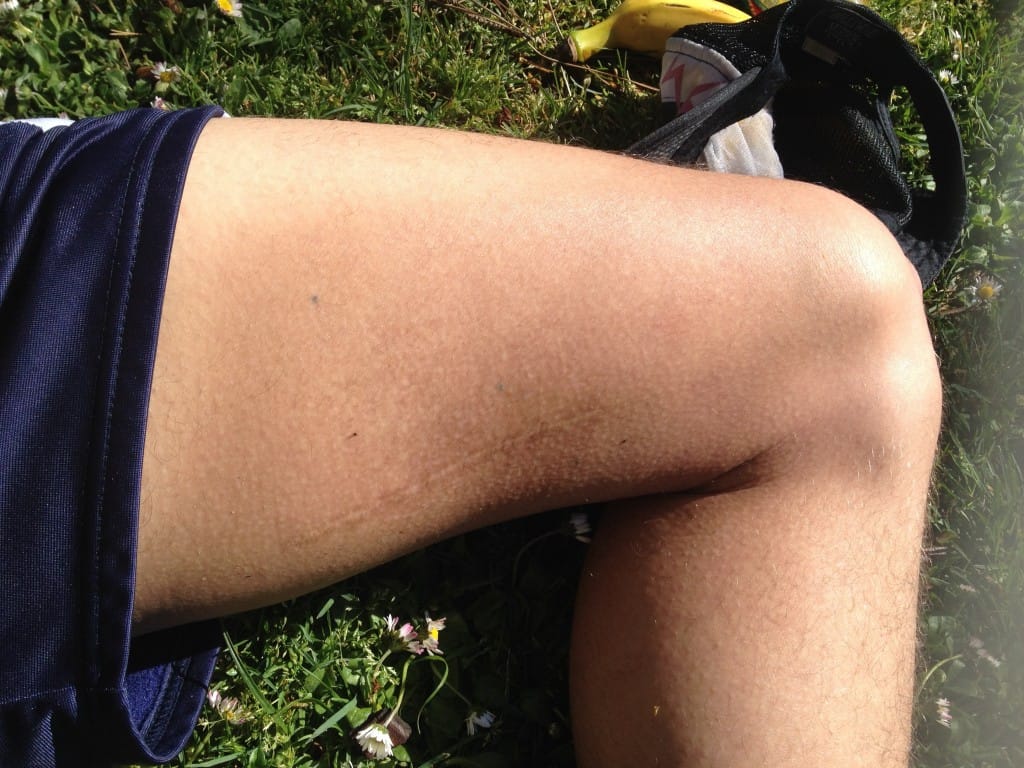 The type of tumor I had (a soft tissue liposarcoma) has a tendency to spread to the lungs in some cases. So I had regular CT scans intermittent with x-rays to be sure that there was no sign of metastasis. I got used to that uncomfortable sensation of the CT dye that warms your whole body and makes you feel like you might, or you did, pee yourself. Things went well and though my doctors would have preferred to continue with regular check ups for 5 years following my treatment, our trip around the world was coming up so I cut it a bit short. But I did manage to get my last scan when I was home for Christmas in 2012 and have no signs of cancer. 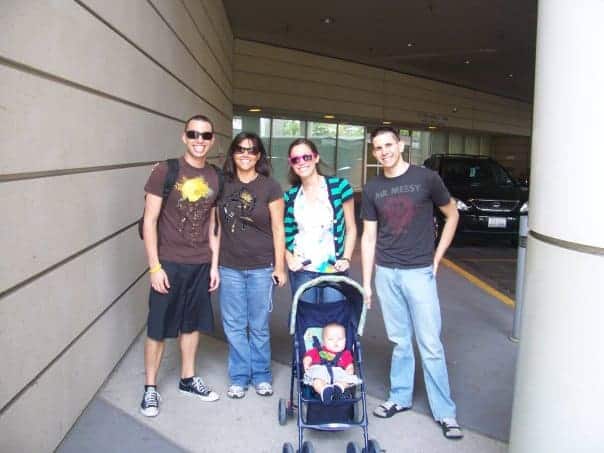 During this half marathon, I thought about that whole experience. I thought about how much I appreciated having my left leg. It's a strange and specific appreciation, but I really appreciate having my leg. More than that, I just felt the need to say thank you to everyone who helped me out in big and small ways when I discovered the tumor. To my family for taking me to doctor appointments, for helping me find a surgeon in Arizona, for being there during my surgery and my last day of radiation, and for inappropriate cancer jokes and lots of laughter. To Auston for all that and more, like helping me bandage my leg everyday while it healed from the radiation treatment. To the amazing doctors (surgeons, radiologists, oncologists), nurses, laboratory scientists, and various hospital staff who cared for me.

And I would very much like to thank my left leg for helping my right leg to carry me across the finish line. It was a sense of accomplishment I didn't expect to feel. It was just a half marathon, but it meant everything to me to be able to do it. Perhaps I'll have to add a full marathon to my life goals now. After all, I intend to get as much use out of these legs as I can! 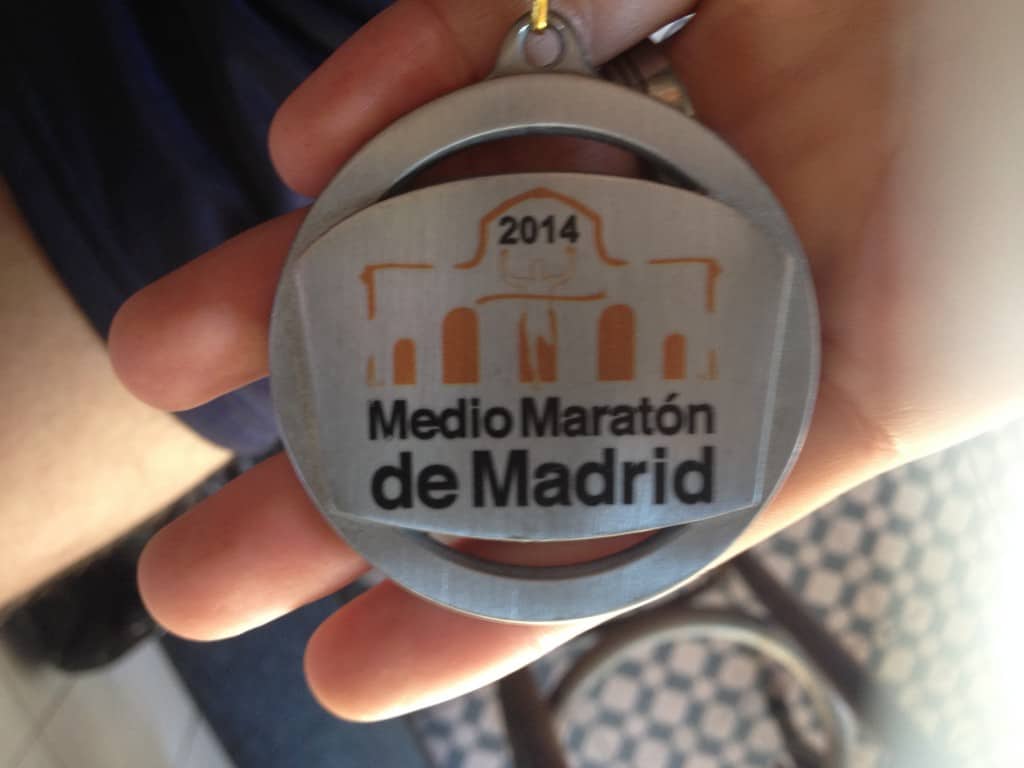 My medal for completing the half marathon

What are some of your life goals you've been able to accomplish or hope to in the near future? Have you had to overcome a huge obstacle to achieve them? Share with us in the comments below – you know we love to hear from you all!

4 Comments on “Running a Half Marathon 5 Years After Cancer”