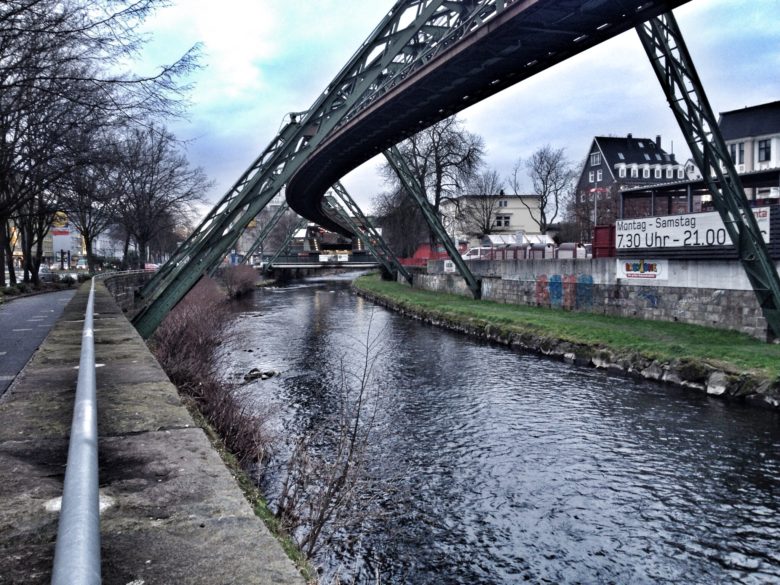 Back sometime in 2011, Auston and I were still living and working in Chicago while planning and saving for our round the world trip. The details of this one year journey had not been worked out yet and we savored every possible destination. We really felt like we could go anywhere and see anything. It’s a liberating feeling to say the least. The odd side to this is the inexplicably random inspirations you can get to visit peculiar cities. I had just a random inspiration for Wuppertal, Germany.

So, back in some autumn month in 2011 I was sitting in the living room of our downtown apartment watching a documentary type show on our 65” flat screen HD TV. I wish I could say I’m happy to be rid of our unnecessary “earthly possessions” that we sold to fund our trip, but the truth is that I really, really miss that TV. And DVR. I really miss DVR. Anyway, watching this show was the first time I heard about Wuppertal’s Schwebebahn, a suspended monorail over 100 years old. At first I thought it sounded neat, but didn’t think much more of it and wasn’t entirely intrigued until the story of Tuffi. 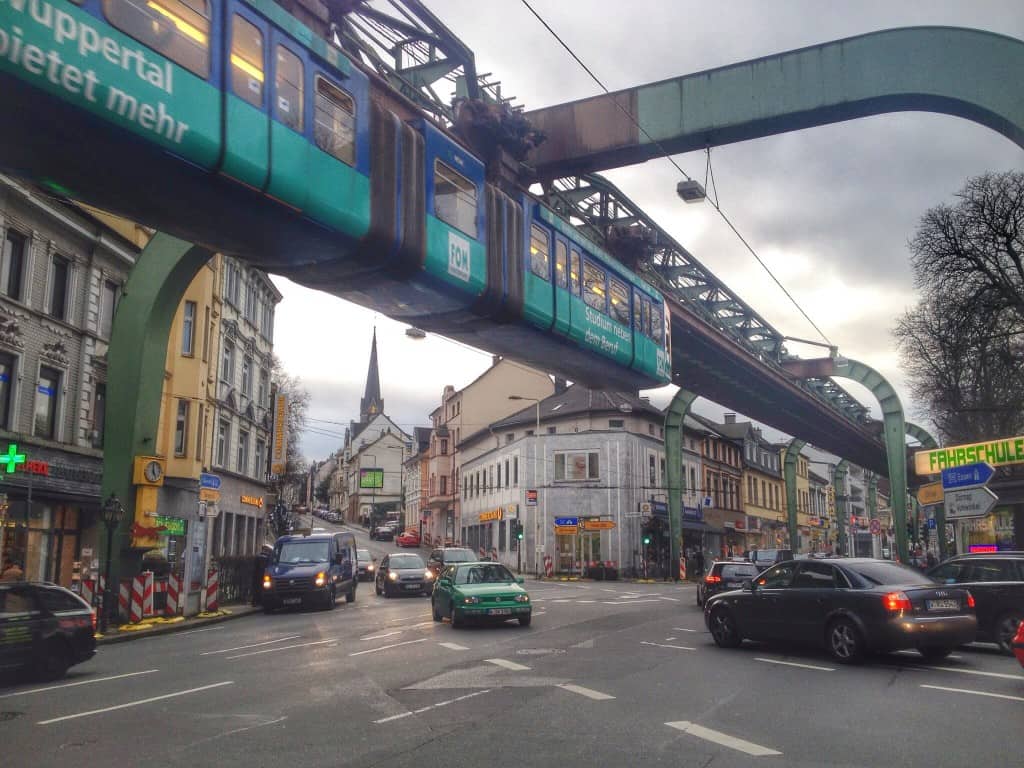 The Schwebebahn opened in 1901 to the general public making it the world’s oldest electric suspended rail system. It is still in use today carrying about 25 million passengers annually above the River Wupper on its 13 kilometer track to its 20 different stations. In 1950, as a marketing promotion, the Althoff Circus brought a 4-year old elephant named Tuffi onto the suspended railway. Spooked, Tuffi broke through one of the carriage windows and fell into the river 12 meters (about 39 feet) below. Luckily Tuffi only suffered some minor scratches. She was aided out of the river and the circus director was fined.

Hearing this story, I was determined to ride the Schwebebahn to see where this random and somewhat hilarious event occurred. Something about Tuffi’s plight resonated with me. Perhaps it was my own fear of heights (recall when I climbed on a human-size spiderweb 25 meters up) that allowed me to understand why she’d take her chances in the river rather than continue on such a terrifying rail ride suspended above the ground. I just had to see and experience it for myself!

Much to my disappointment, we never made it to Wuppertal during our round the world trip. We had been in Germany, but we only visited cities like Berlin, Munich, Stuttgart and Heidelberg. – none of those close to Wuppertal. Still, my dream to ride the Schwebebahn never wained and I always kept it in the back of my mind. So when we finally had to opportunity to go to Düsseldorf for Carnival in February, I made sure to reserve an afternoon to head to Wuppertal, about 30 kilometers (or 20 miles) from Düsseldorf. Finally I’d have my chance to see the Schwebebahn up close and see where Tuffi’s dramatic spill took place.

We rode the train almost along the entire track enjoying a calm ride through the city on the world’s oldest suspended train system – a simple but really satisfying “adventure”. Along the way, we got off at the spot where Tuffi fell and of course found that there was a restaurant (L’éléphant) nearby named after her. We also found the painting dedicated to Tuffi on the wall of a building nearby. 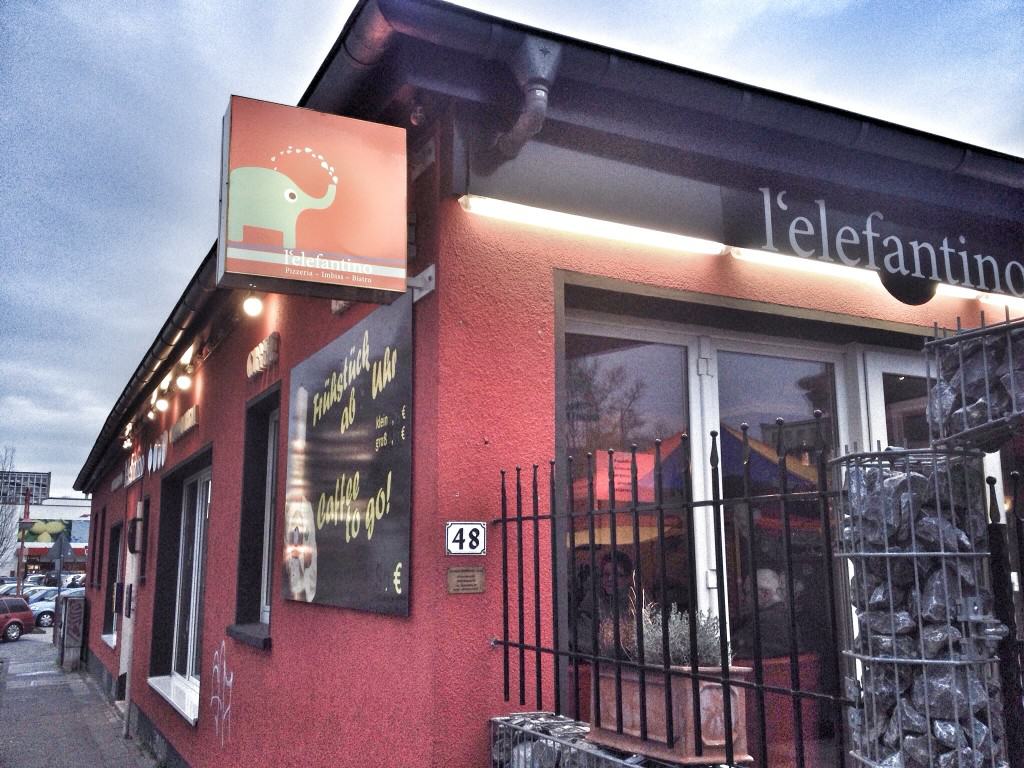 It was a random excursion, but also one of the reasons we love travel. There are so many things that can inspire a trip – history, art, culture, language, festivals, music, family, friends, work, school and yes, even random stories of elephants following from monorails. We can be inspired by anything no matter how serious or silly. Or we needn’t be inspired at all and can go just for the sake of going. I don’t think I would’ve made such an effort to visit Wuppertal if it weren’t for this story, but I really enjoyed my few hours in the city, riding the Schwebebahn, and thinking of Tuffi (who by the way, died – I like to imagine peacefully – many years later in 1989 after being sold to Cirque Alexis Gruss).

Have you ever been inspired to travel somewhere for a seemingly random reason? Have you ever heard of Tuffi or ridden the Schwebebahn? Let us know in the comments below!

7 Comments on “Wuppertal: Where an Elephant Rode the Monorail (Unsuccessfully)”