Is Colmar Europe’s Most Beautiful City?

Hitchhiking, toy museums, Christmas markets, and the Statue of Liberty. We kept ourselves fairly busy in this attractive, architecturally-lavish French town. Just 20 kilometers from the German border, Colmar is the third largest city in Alsace, a region of France well known for its wine, and formerly seized by Germany on two occasions in 1871 and 1940 resulting in a beautiful pairing of French and German architectural styles. Arguably one of the most beautiful cities we’ve visited, Colmar is more than just another pretty face in the crowd of quaint European cities. Its museums, shops, markets, and squares give it a creative and intelligent personality to flaunt as well. 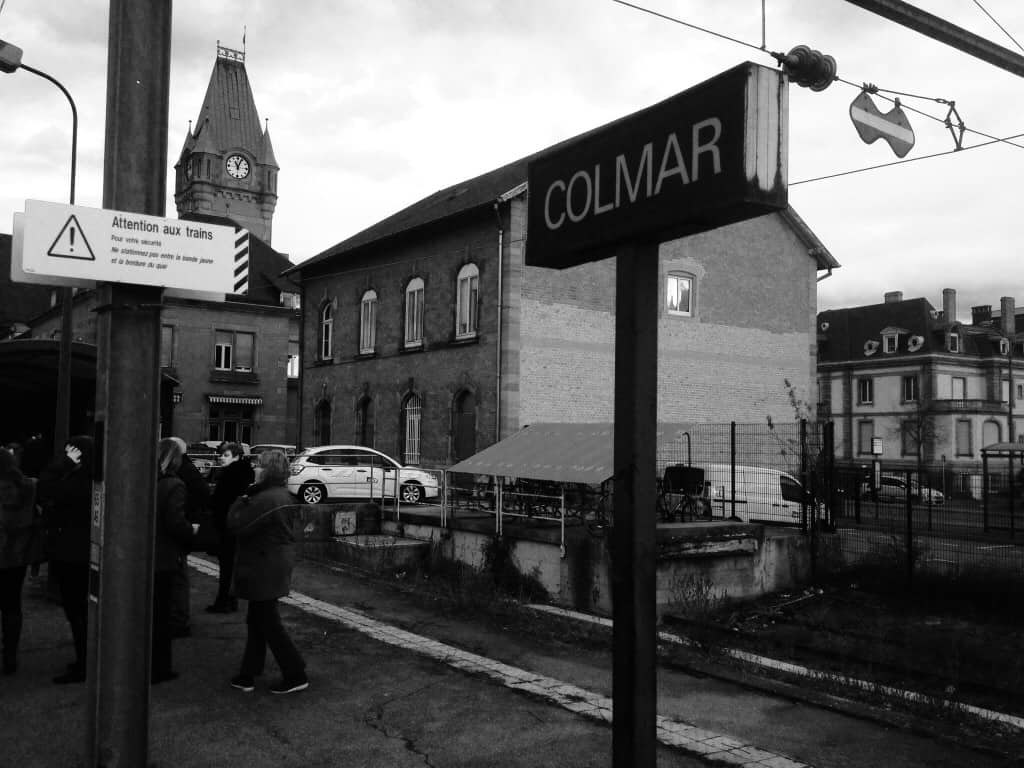 As captivated as we were by the city’s stunning neighborhood referred to as Little Venice – a nickname I get quite tired of as it seems that any city with at least two canals likes to call that area “the Venice of the North/East/South/West/Whatever” – knowing that that area formerly belonged to the butcher’s, tanner’s and fishmonger’s of the city, makes you wonder how much of the Colmar you see now is anything like the Colmar it was back then. What’s really being preserved – the way it was or the way we like to imagine it? It’s an interesting thought but no matter, I was happy to take full advantage of the blissful imagery and bountiful photo ops! 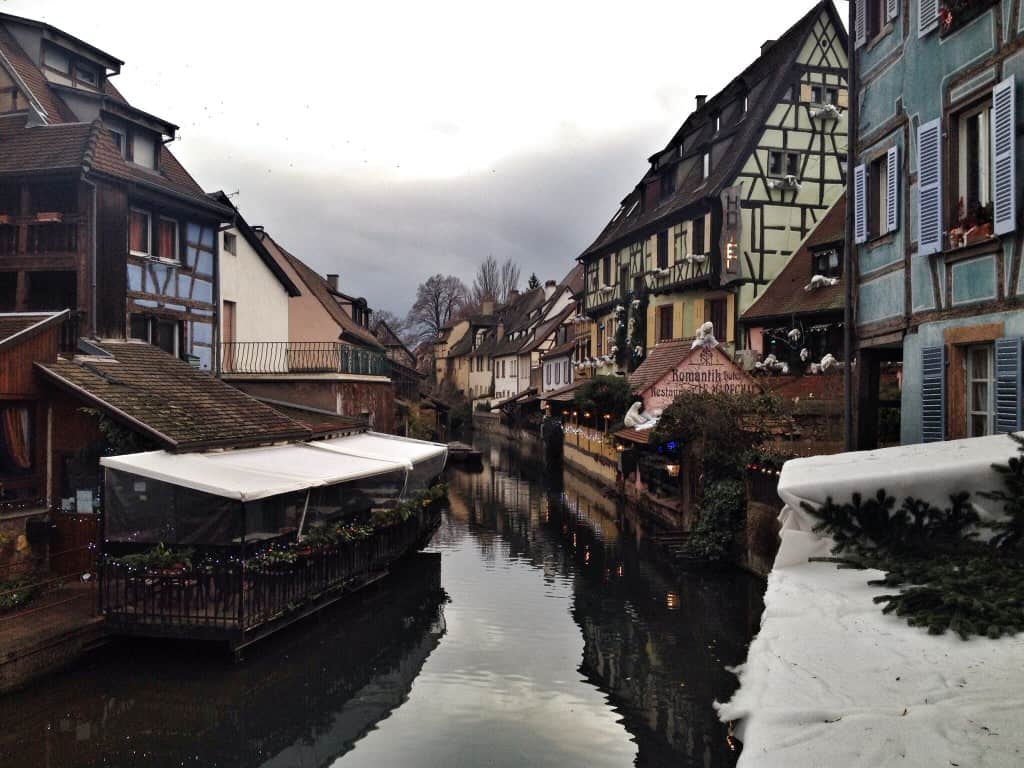 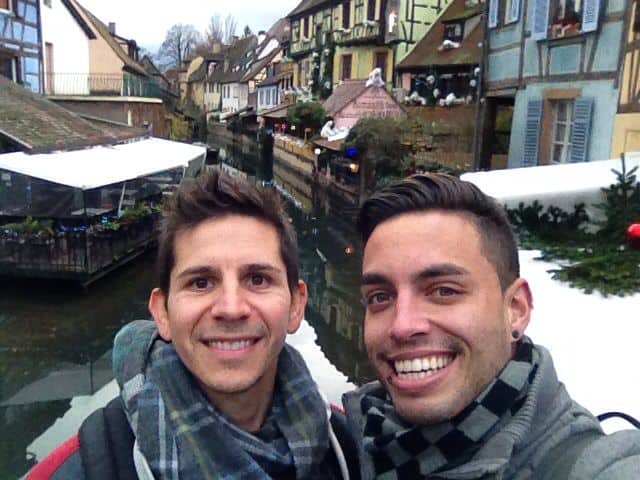 We stayed in a hotel a few kilometers outside the city to save a bit of money on the accommodations – hence the hitchhiking hook at the start of this post. We’d never attempted it before and thought, “Why not give it a go? Could be a great story!” Alas, the story ends there as no one wanted to stop to help out these two handsome gentlemen in need. Colmar’s bus system is well structured for a small city though so we made do with the public transit. 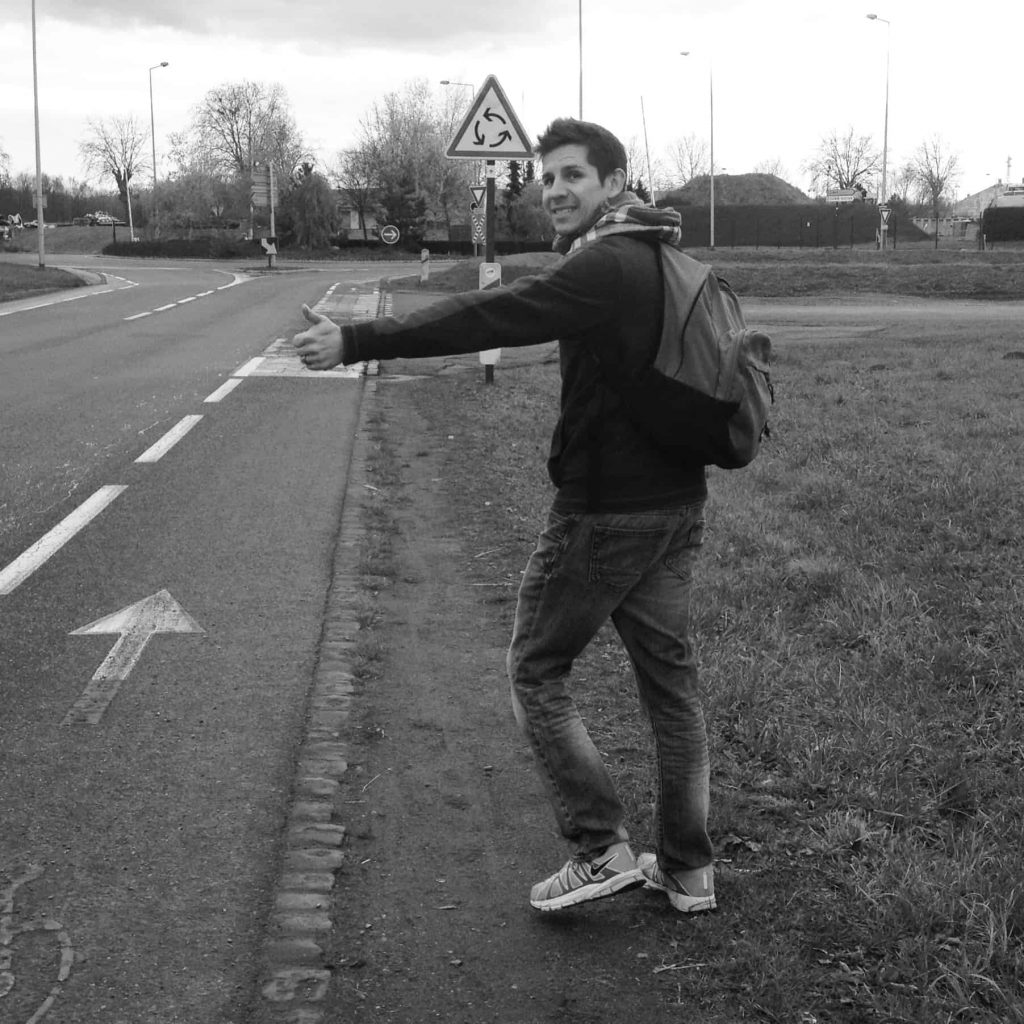 Arriving in the city center, we were taken away with the brightly colored, well maintained buildings parted by narrow streets. Christmas markets filled the squares as ’twas the season. We tried to hold off on indulging in the seductive glühwein that would warm our bones until after we’d seen some sights. The city offers a small street train, or ‘Petit Train’, for a quick tour of the main sights of Old Colmar (Maison des Têtes, St Martin’s Collegiate Church, the Pfister House, and Little Venice) which we took advantage of to began our day. 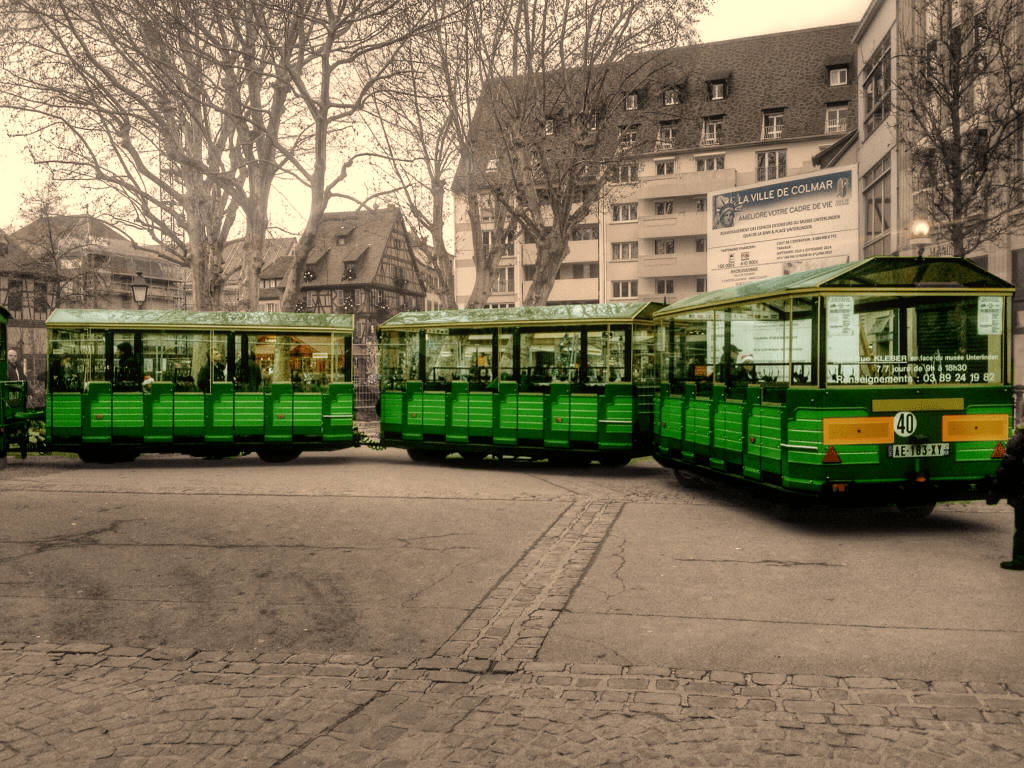 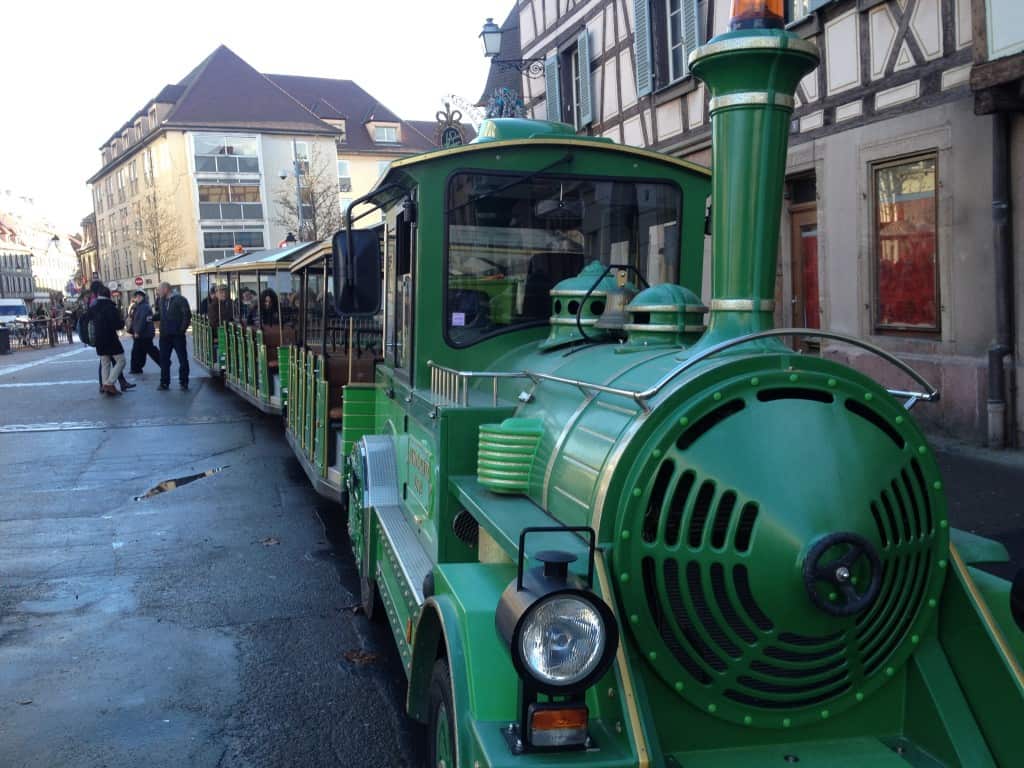 There are about five main museums in Colmar and one of the more peculiar – and family friendly – ones is the toy museum Musée Animé du Jouet et des Petits Trains. Upon walking in, it doesn’t exactly feel like a Toys ‘R Us, Legoland, or any other toy store as I expected. Nor did it feel like a traditionally informative museum. It was more like someone had discovered all the leftover items from the years of yard sales your grandparents had had and put them into glass cases for display. This is not to say it wasn’t interesting. It was indeed, but with an eerie glimpse into a past told through the eyes of a young-looking yet ageless doll that had seen more years than you knew you ever would. One of the more interesting “exhibits” is the re-creation of well known movies and TV programs constructed with Legos, i.e. The Abyss, Little House on the Prairie, Lord of the Rings, etc. It’s a nice way to captivate an adult’s imagination as well. 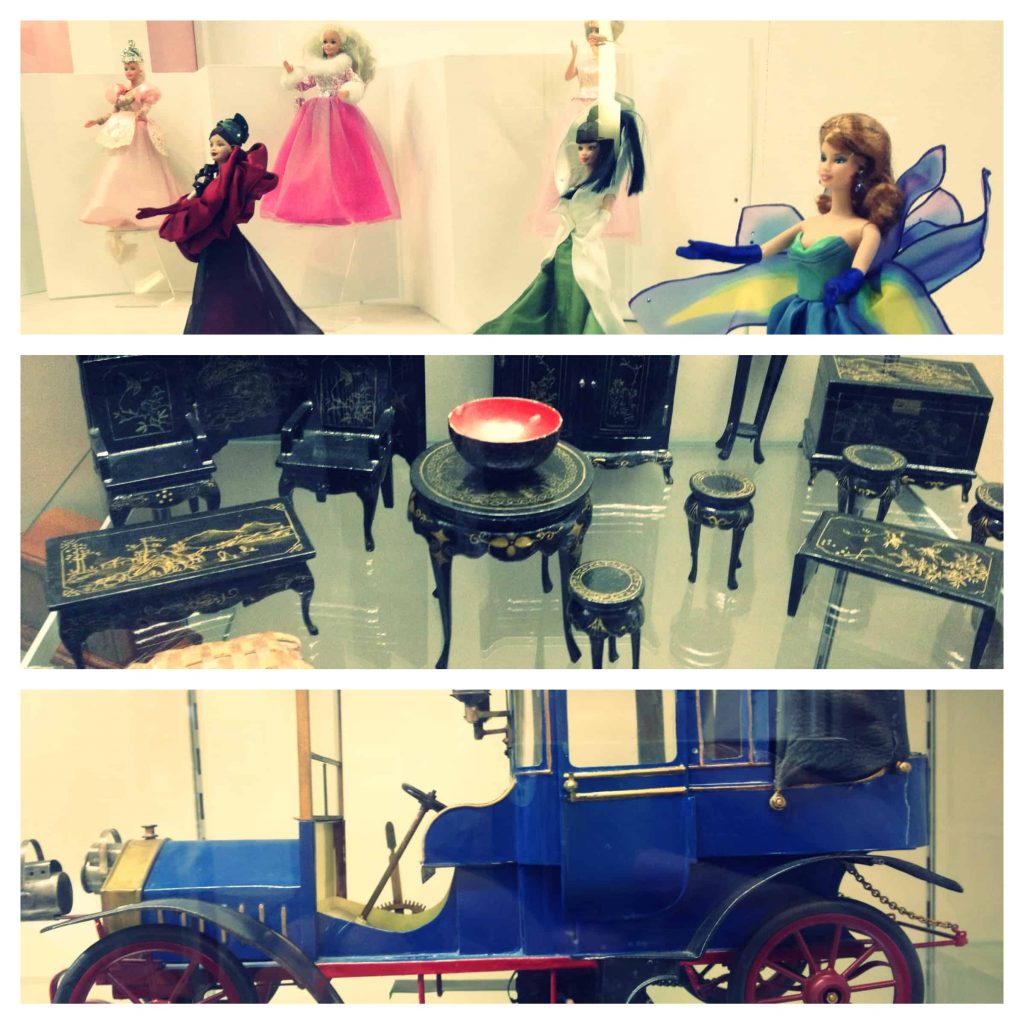 Next, on to a more mature museum, we checked out the Bartholdi Museum not more than a ten minute walk away. Bartholdi is the designer of the Statue of Liberty and was born in Colmar, France. The museum is on the smaller side, but filled with his works on two levels. It is dedicated to Bartholdi’s many accomplished sculptures as well as a section on the creation of America’s Ms. Liberty. It doesn’t require much of your sightseeing time and thus is easy to stop by and check out. 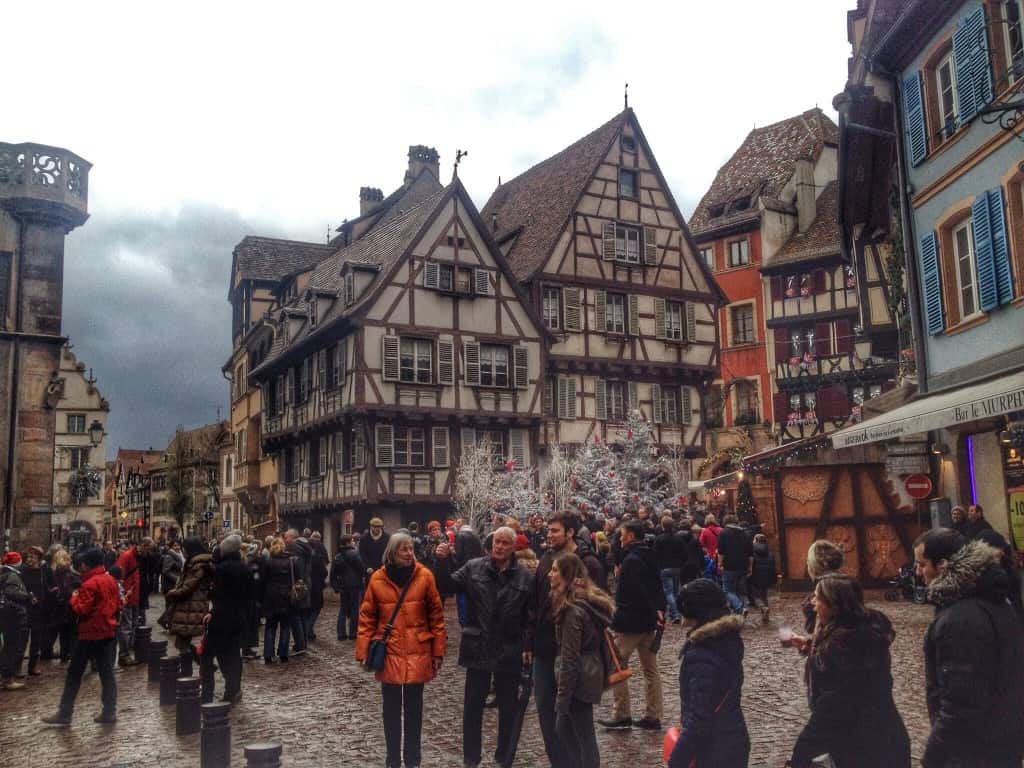 Colmar is a city we absolutely recommend for those into the quaint European charm of small villages and towns. You’re guaranteed great pictures, a relaxing stay, and still plenty to do. Even though Auston and I tend to be more big city dwellers than small town people, even we can’t resist the charm of staying a few nights away from the metropolis frenzy. Just don’t count on hitchhiking in Colmar. No one will pick you up! So save yourself the trouble by staying in the center.

So is Colmar Europe’s most beautiful city? Well for us, it’s at the top! As there’s currently an online debate about which is Europe’s best small town, we’re willing to argue on the side of Colmar as one of our top favorites. Check out this article that’s pairing up various small European cities to compete as the “best big-time small destination”. Feel free to vote and decide for yourselves! 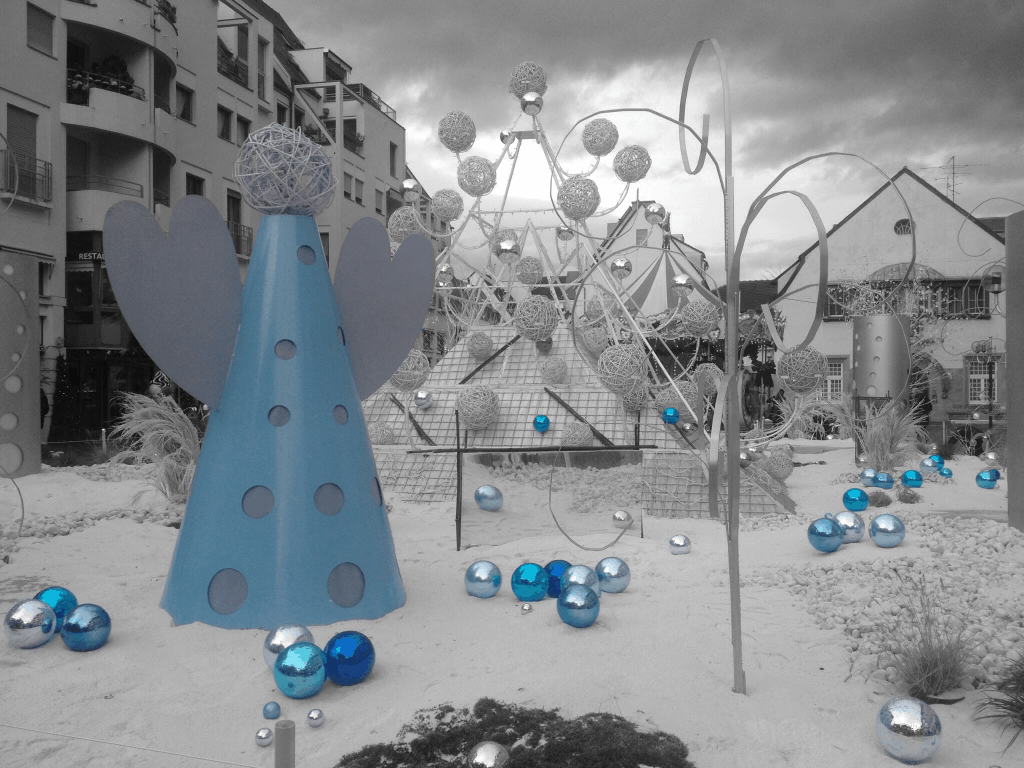 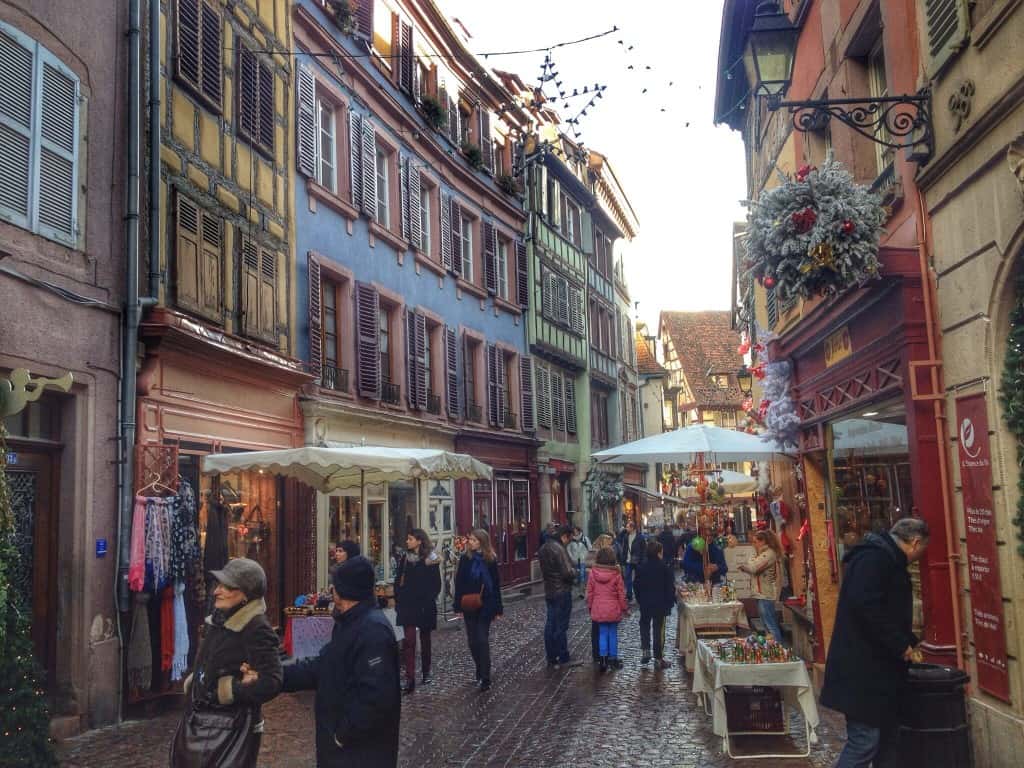 What do you think? Has Colmar charmed you? Let us know in the comments!