Antwerp’s “To Russia With Love” Kiss In

Auston and I have never been huge gay rights activists though we have plenty of friends who take on that role and some who are even employed in that area of work. To them, and to all the countless others that we don’t know personally, we are of course eternally grateful for the work they do. We and the rest of the LGBT community directly benefit from their hard efforts. However, I’ve just never been innately passionate about it. It’s odd I suppose since it directly affects me, but it’s the same for many others. Just because you’re woman, or a minority, or an immigrant doesn’t mean you’re working day and night for your specific rights even though you clearly need and benefit from them. We all take on different passions, hobbies, works and activities. And we support one another when necessary.

So while Auston and I have much to gain from gay rights, we do not necessarily work toward them all the time. However, our main and minimally expected contribution (as I believe should be every person’s from the LGBT community) is that we are out. It is crucial for everyone to be out and it’s the very bare minimum we can expect of each other. It is by being out that the gay rights movement has been able to progress over the decades. It is by being out that, one by one, we have been able to gain the support and love of our straight allies. This is one thing I will always be vocal about and it is the one thing I expect others to be as well. As long as someone can safely be out, they should do so for themselves and for our community.

Why I am bringing this up is because of Russia. Yes, I too feel the need to throw my two gay cents in. I’m sure everyone is up to speed on the new anti-gay law, but in case you live under a rock or your television doesn’t have gay reception, google it.

So because Auston and I come from the States where LGBT rights are progressively moving forward with the partial strike down of anti-gay laws like DOMA and currently live in Spain, a country that is in many aspects further along in gay rights than the States, it is with these blessings I can’t help but feel the pain of what’s happening to the gay community in Russia. Giant leaps back in time. Regression of equality. Emotional, physical, and legal abuse. 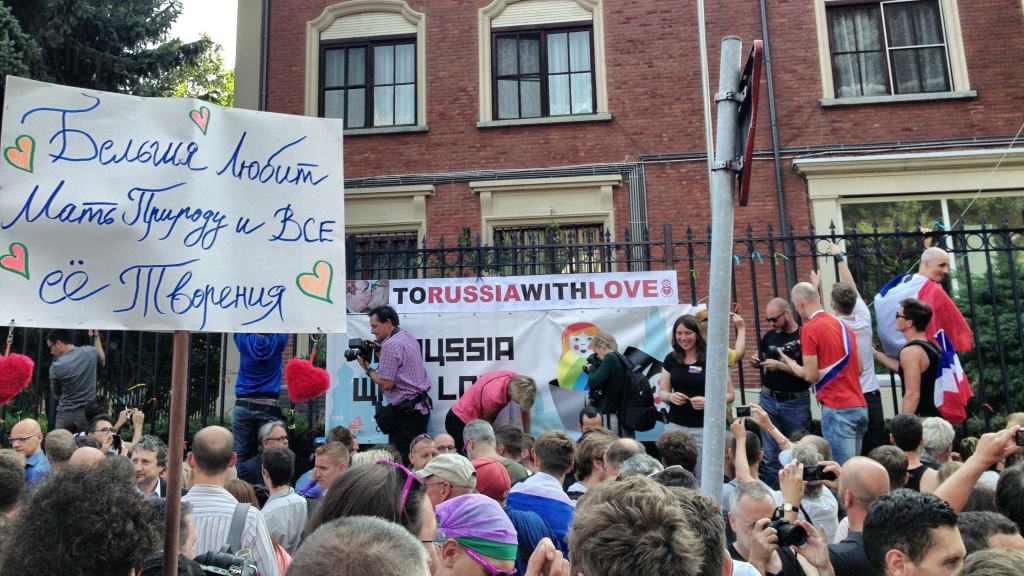 As we were recently in Antwerp visiting for their Gay Pride and WOGA 2013, we were enjoying a weekend of progression, of acceptance, of celebration, and of equality. But not a single person at these events was immune to the happenings just four countries to the east. After all, we were at an international event celebrating sports, diversity, and culture. With such a large and diverse LGBT presence, it was an incredible opportunity to take part in the protests that were occurring around the world. In front the Russian consulate in Antwerp everyone congregated to partake in a one minute Kiss-In with *gasp* someone of the same-sex.

It was a small, seemingly insignificant gesture on everyone’s part, but with the growing masses of LGBT communities and their allies worldwide, hopefully voices are being heard. This of course is not just about Russia as there are many other nations where the LGBT communities face persecution. We must rely on one another as a global community of equals and remember that even the smallest of acts can mean something. Can say something. Can accomplish something.

With so many protests of Russia’s anti-gay law going on worldwide, what have you seen or taken part in near your city? As an LGBT individual, would you visit Russia today?