When Auston’s mom came to stay with us for a week, it was the perfect opportunity to do a self-guided walking tour we had seen mapped out in our Lonely Planet Madrid guidebook. It was a chance to finally get out and explore Old Madrid and best of all, we didn’t have to pay for a tour guide! While we’ve been settling down in Madrid, we’ve been doing absolutely no sightseeing whatsoever. There has been plenty to do otherwise and we figured we could save the sightseeing to do with friends, family, and couchsurfers that stay with us.

It was actually the first time we had tried self guided walking tour and we liked it a lot, especially in old Madrid. Paid walking tours can be great if you have a good and knowledgeable guide; plus you can  ask questions to inquire further and get great personal tips. But we really enjoyed the self guided tour because we got to go at our own pace and the book gave us the basic run down of need-to-know information of what we were visiting. Simple. Quick. Free.

Lonely Planet’s Madrid City Guide has seven different walking tours to choose from and we went with Old Madrid. It had twelve destinations in all, covering about three kilometers and it took about four hours (the book suggests 2-3 so we must have dilly-dallied quite a lot). We went out of order just based on the fact that where we live in Madrid put us about midpoint in the tour so we just circled back to the beginning. 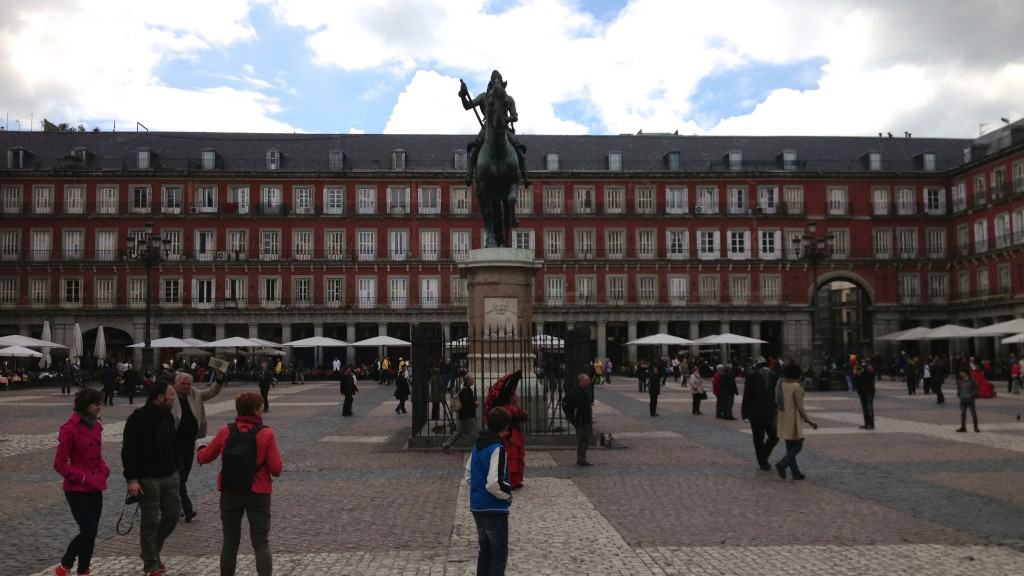 Our first stop was Plaza Mayor which has seen a lot of Madrid history pass through since 1619. Bull fights, executions, and celebrations have all taken place here. Today, it’s still a decent spot to sit at a patio table and watch Spanish life go by. From there, the second stop was a restaurant called Casa Revualta. It was one of the only things we did not care for in the walking tour, having this tourist-packed restaurant as one of the sights of Old Madrid. There’s no real details on the place except that it has great tapas. So… we move on. 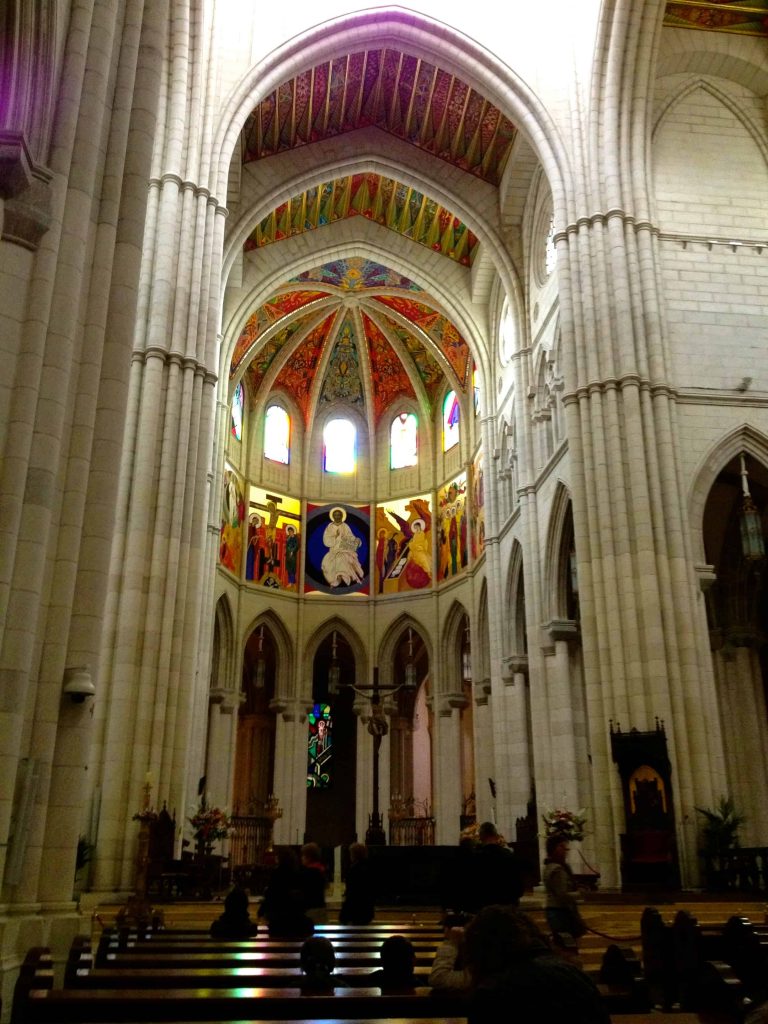 Next we visited Catedral de Nuestra Señora de la Almudena, a cathedral over 100 years in the making. Completed in 1992, the Lonely Planet guide describes the interior as “charmless” and though we’re not ‘cathedral connoisseurs’ by any means, we felt the inside is still beautifully designed and well worth the look. Next, we headed for the marvelous Palacio Real, completed in 1764. As we approached the palace we couldn’t help but feel that, though the building was gorgeous, its courtyard was rather plain. Later, we realized that on the northern side of the palace are the Sabatini Gardens where the best view is found – and certainly not ‘plain’! In between all those stops, we checked out a few small plazas with somewhat notable histories and beautiful layouts that I’m going to breeze over. The Plaza de España, however, was not one of those beautiful plazas. Though it’s a main one in Madrid, it’s rather dirty and unimpressive compared to other more well maintained plazas like Plaza de la Villa, Plaza de Oriente and Plaza de la Puerta del Sol. 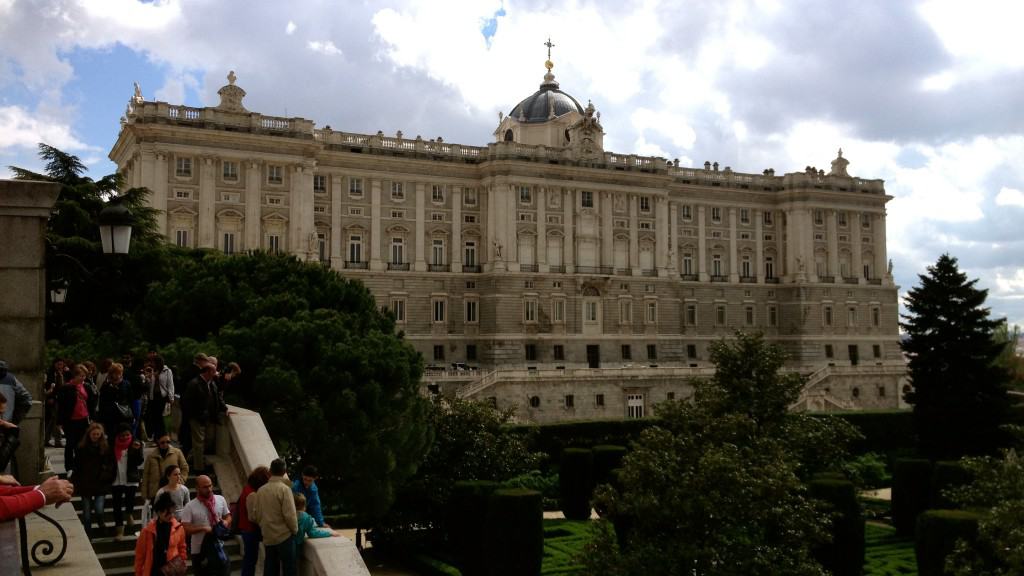 From Plaza de España, we strolled down Gran Vía, a grand street created 100 years back when it replaced the maze old smaller street. We were supposed to be heading toward a convent, but we were then distracted by the scent of churros and coffee at a fancy cafe. It was aptly decided that we were due for a rest right there (though there is a recommended stop for this on the tour). Sadly, the churros were nothing if not bland there and we had way better ones at a place called Hot Dog & Churro of all names. Still, our churros were served with thick, rich, melted chocolate. What doesn’t taste good dipped in that?! 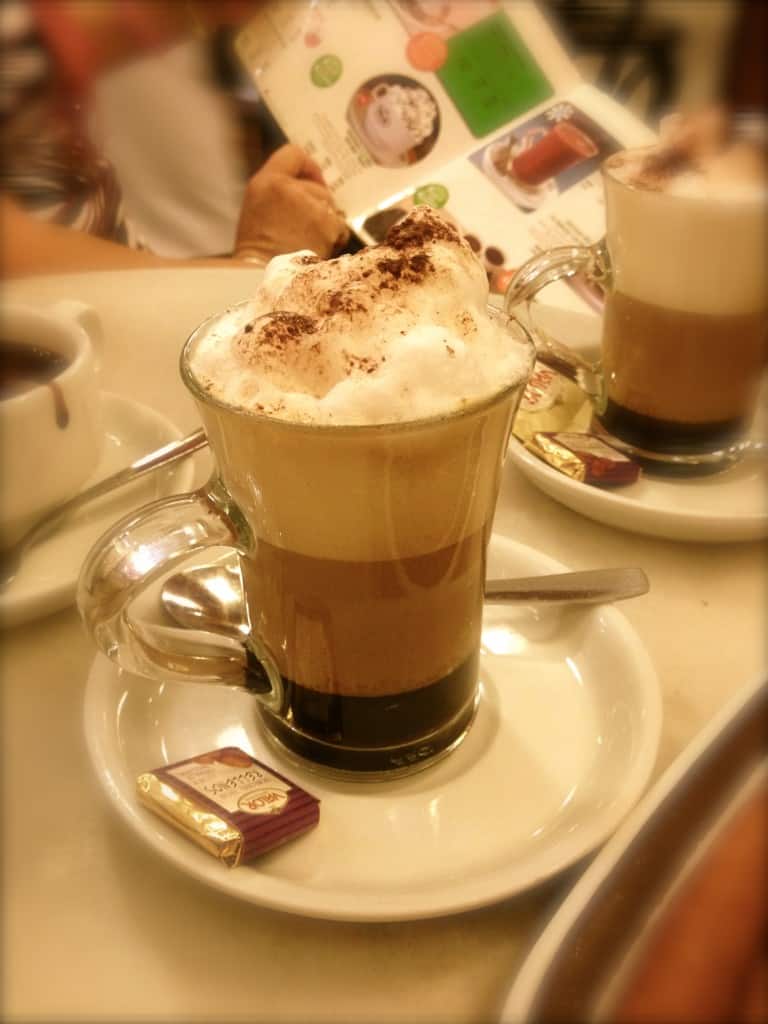 Continuing on our way, we stopped by the Convento de las Descalzas Reales, though it’s really nothing to look at from the outside. It’s the inside that counts, but unfortunately they were closed when we arrived so we’ll have to revisit another time. Our last stop on our walking tour was one more church, but after four hours of walking we were tuckered out and decided to hell with it and went home. It was a very enjoyable and relaxed tour around the city. At each sight, we’d stop and read about whichever destination we were at in the guidebook to learn more about the history.

Our favorite sight was unsurprisingly the Palacio Real. It’s a gorgeous building that strikes the Madrid skyline (if you could claim in had one) on the western side of the city and has beautiful gardens worth a stroll. I doubt we’ll actually do the remaining six  self guided walking tours in the book, but one or two more wouldn’t turn us into ‘good tourists’ completely, right? Might be worth it! In any case, the tour gave us great tips on what to do and see while in Madrid especially if you only have a few hours to explore.

Have you ever done a self guided walking tour when traveling? Or do you prefer to pay for walking tour or perhaps even the city bus tours? What's your take?