When you make your way to see the infamous Iguazu Falls in South America, you're going to want to choose which side to visit in the National Park. And if you chose both sides, you chose right. The falls are formed by the Iguazu River which creates part of the border between Argentina and Brazil – hence the two sides of the falls.

We made our way from Córdoba to Puerto Iguazú to see the Argentina side of the falls first. It was a long, loooooong bus journey of about 22 hours so we finally decided to it was time to dish out the money for better seats. Instead of buying the semi-cama seats like we had been while traveling from Peru to Chile and from Buenos Aires to Mendoza, we finally bought the cama seats which are nicer, larger, and recline farther back. The extra cost was worth the extra comfort this time around. 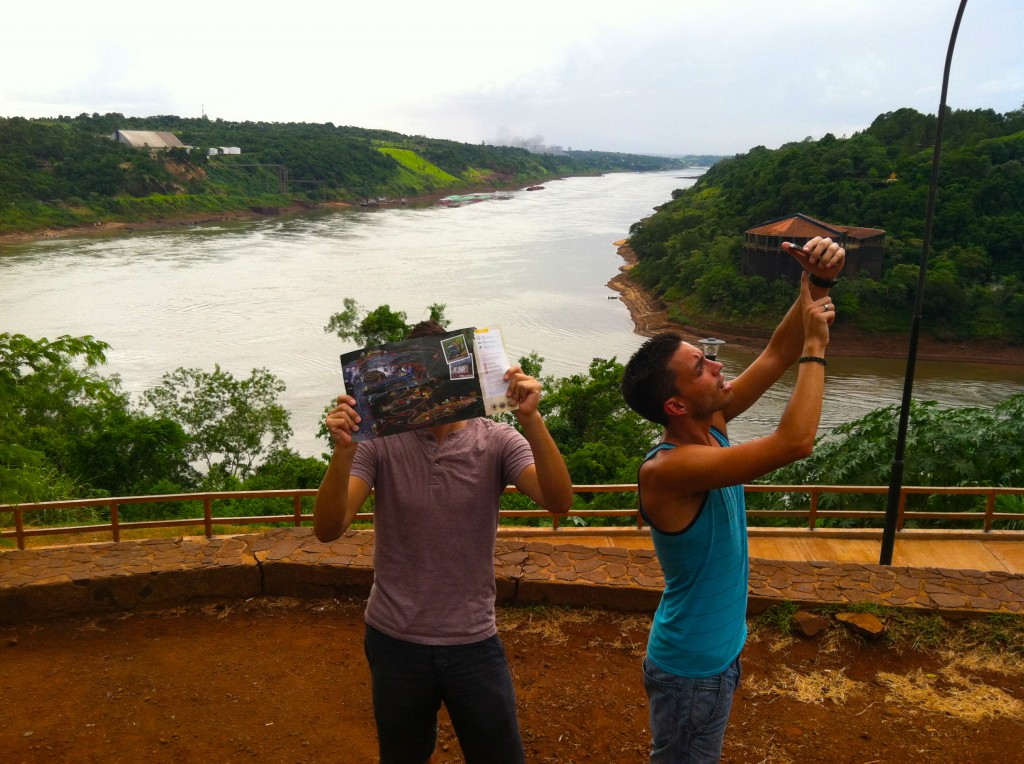 At La Triple Frontera in Argentina

Once in Puerto Iguazú we could have taken the remaining part of the day to spend a few hours at the falls, but we knew we'd enjoy it more feeling refreshed after a good night's sleep. Instead, we took a walk from our hostel to the Triple Frontier where the Iguazuú river meets the Paraná river. This is where Brazil, Argentina, and Paraguay converge and you can see all three from the riverside. Perfect photo ops!

The following morning we felt ready to see the falls and even managed to wake up early to get a good start. I think I even surprised Ed (who we were still traveling with) and Auston by waking up first and having to get them up unlike every other morning when they're up hours before me. But this was a day I was excited for so I felt motivated to avoid my snooze button. I was, however, slightly sleep deprived that morning since I was kept awake by the couple copulating in our shared hostel room. Apparently they felt that was a good time to go at it without any attempt of being inconspicuous. I couldn't help but crack up and luckily they weren't concerned with endurance so I eventually got my shuteye. 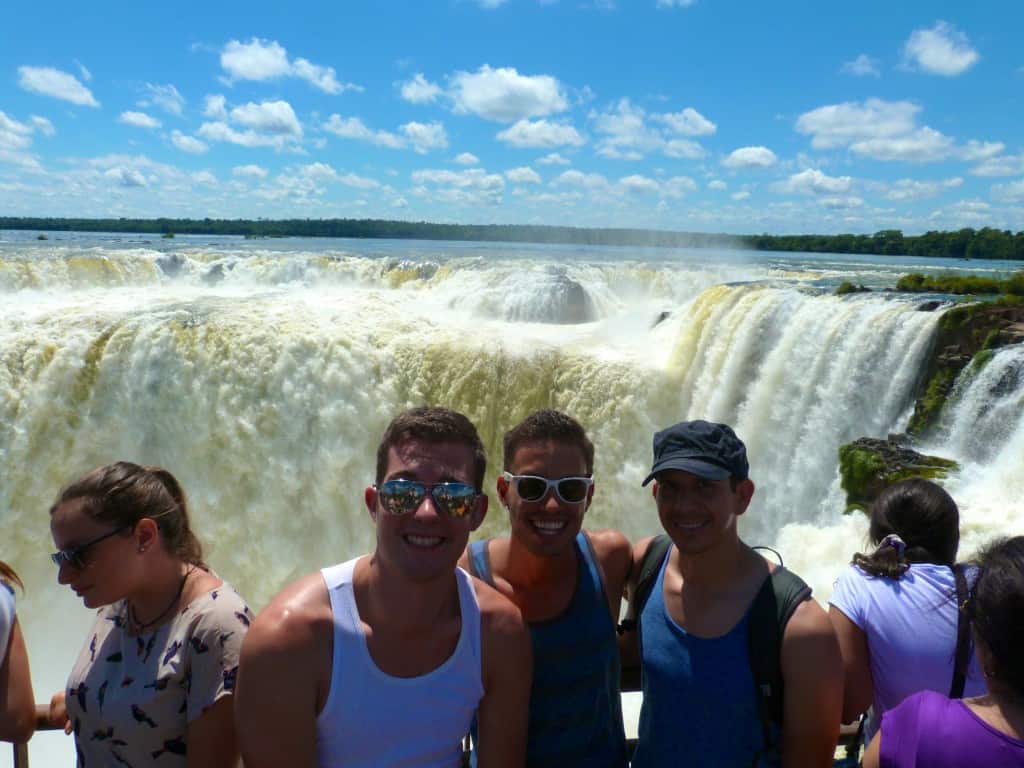 From the hostel we took a quick bus ride up to the falls to begin our exploring. Ed was dismayed to find that he forgot his SD card for his camera, but I saw this as an opportunity. I offered him my card so he could take photos all day as long as I got to have those photos as well. Perfect. Now I could enjoy the falls without  looking through a camera lens the whole time. The only downfall was when I later realized that Ed takes a ridiculous amount of photos that I had to sort through. And at least half of them are of him. DELETE.

Anyway, Iguazú National Park had a fair amount of terrain to cover but there is a small train to aid you in covering that ground. We took that to see the mother of all the falls, La Garganta del Diablo (the Devil's Throat). It's immense and the walkway allows you to stroll right up to it. The irrational fear inside me was almost positive the walkway would give and we'd go tumbling down to meet our doom (we didn't). 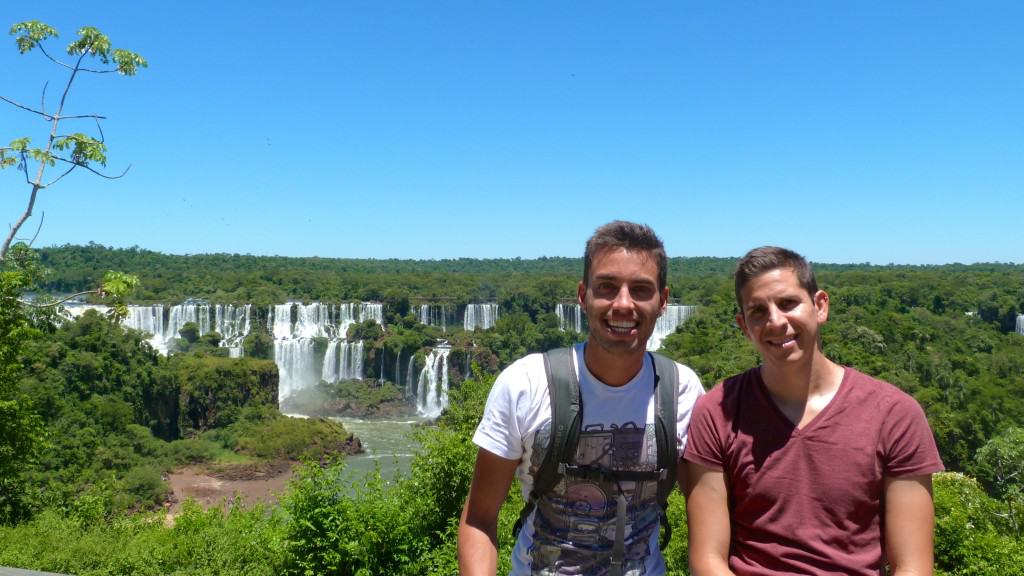 Brazil side of the falls

After we had enjoyed the Argentina side of the falls for a few hours, it was time to cross the border that evening to Foz do Iguaçu, the town closest to the falls on the Brazil side. We woke up (a littler later) the next day to see the falls again from this side. The second time around we decided we didn't need as much time to see the same water feature so we kept that visit shorter. I particularly loved this side because you can see the entire falls from a spectacular vantage point. The Argentina side is great to see it up close for a surreal experience, but the Brazil side is the best way to get the entire picture.

Once we had our fill of the falls (two days is plenty of time to see Iguazu Falls in both Argentina and Brazil) it was time to make our way to Rio for Carnival, but not before we made a stop off in Parati for a couple nights

7 Comments on “The Two Sides of Iguazu Falls”