Royal Palaces, Nobel Prize ceremonies, thousands of islands, mesmerizing architecture, and the ABBA Museum. Stockholm is a gorgeous waterfront city that literally has it all. Upon visiting Sweden’s capital, you will immediately be taken by its undeniable charm. As the country’s largest city with a population creeping above 2 million, this Scandinavian metropolis is a must-visit when touring Europe. Gamla Stan, the city’s Old Town, is a beautiful place to stroll around, grab a bite to eat, and admire the colorfully detailed buildings splashing up along the city’s never-ending coastline.

Unlike many large cities around the world, Stockholm does not have a well-defined gay district. In a way, this speaks to the way in which LGBT life is so normalized in the city. Stockholm bars, clubs and restaurants are scattered throughout the city attracting both gay and mixed crowds. There’s a range of distinct venues that any Stockholm guide will mention like Patricia, a restaurant/club on a former yacht that’s Sunday’s dining and dance spot or Malarpaviljongen, one of the best restaurants/bars to grab an evening cocktail in the summer on the water.

Essentially everywhere in the city is gay-friendly, and people will certainly not bat an eyelid at same-sex couples holding hands. All in all, traveling to Stockholm as an LGBT person is extremely easy.

There aren't currently any gay hotels in Stockholm, but there are many gay-friendly options.

Hotel Rival – The Rival is a luxury boutique hotel in Södermalm. Enjoy 99 designer hotel rooms, bars, bistro and café, modern meeting facilities and a theatre.  The hotel is owned by ABBA’s Benny Andersson and is located only ten minutes walking from Stockholm’s breathtaking old town. Opened in 2003, the stylish property was the first to offer boutique accommodations in Stockholm.

Berns Hotel – Berns is located at the center of Stockholm’s dynamic shopping and restaurant district, overlooking Berzelii Park and the Baltic Sea. With 81 personally decorated rooms, multiple awards and an intimate boutique hotel feeling, Berns is not just a place to sleep. This is where you can eat brunch, take an afternoon cocktail, eat long dinners and listen to live music – during all hours of the day. The well-decorated ballroom at the Bern’s Hotel occasionally hosts LGBT+ themed parties during pride and on other special occasions.

Pop House Hotel – located in the magnificent Djurgården area of Stockholm, just near the city center and at the same address as ABBA The Museum. Around the corner, you will find cultural establishments such as Skansen, Gröna Lund, and Cirkus, as well as lots of walking and jogging trails. Pop House Hotel is perfect for guests who like to stay in a central location while enjoying the calm of nature. 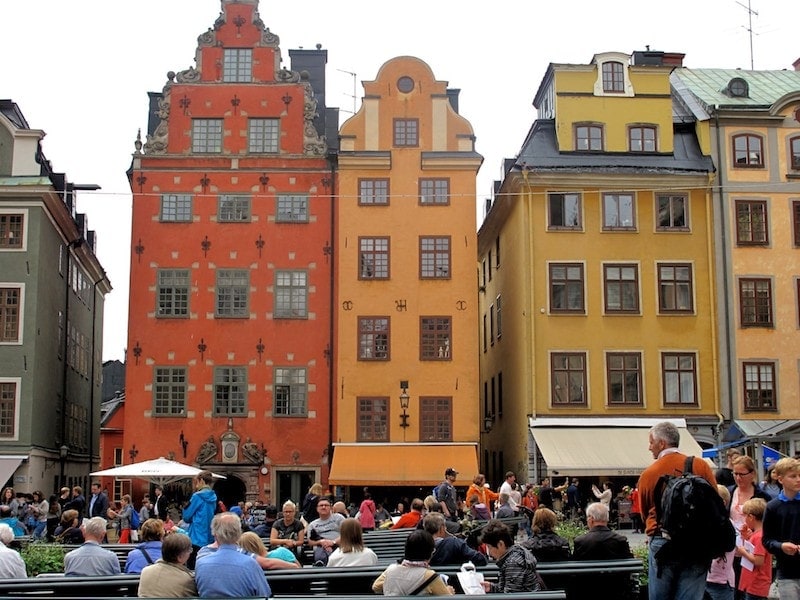 There are many sites for apartment rentals including Airbnb, Vrbo and Booking.com. All three companies have inclusive policies and support the LGBT+ community. Prices are generally comparable to budget hotels, especially if you’re willing to get a room in a shared apartment.

There are even a few LGBT-oriented booking sites like misterb&b where you can rent a room from a local gay host. Founded in 2014, misterb&b is not a hotel or chain, but rather a booking site for rooms, apartments and homes. Similar to AirBnB, Vrbo and Booking.com, misterb&b is an online service, but it allows you to from gay and gay-friendly hosts around the world. They have hosts in more than 200 countries and territories with more than 1 million total listings. Understanding the gay scene is much more easily done with the help of a local and apartment sharing is one of the best ways to meet someone living in the city who knows how things work, where and when are the best nights to go out, and what places to eat at and which to avoid.

Special Offer! Sign up with misterb&b and you will receive a free $10 credit to use on your first booking! 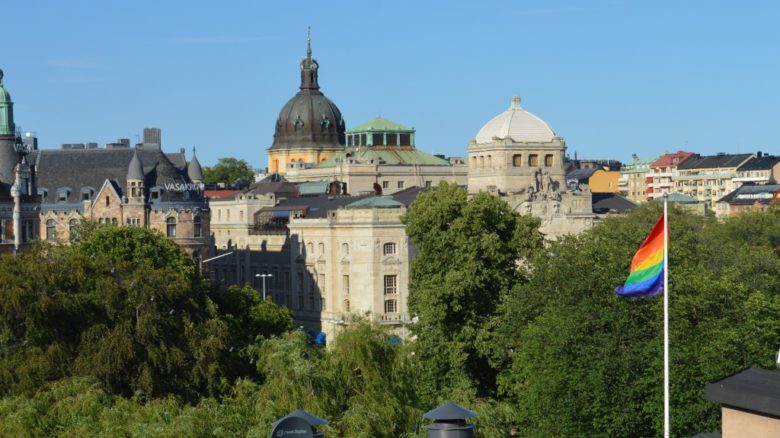 ABBA The Museum – ABBA is one of the world’s most successful pop groups with more than 380 million albums sold. At ABBA The Museum you can be a part of the success story. Get up on stage with ABBA, sing karaoke in the Polar Studios and dance in an ABBA music video. You can also record and download all the fun you’re having using the personal ID number on your ticket. Don’t miss the audio guide, in which Agnetha, Benny, Björn and Frida share their personal memories and stories from their fantastic career. Here, you’ll also find ABBA’s spectacular costumes, gold records, original items, memorabilia and much, much more. Book tour → 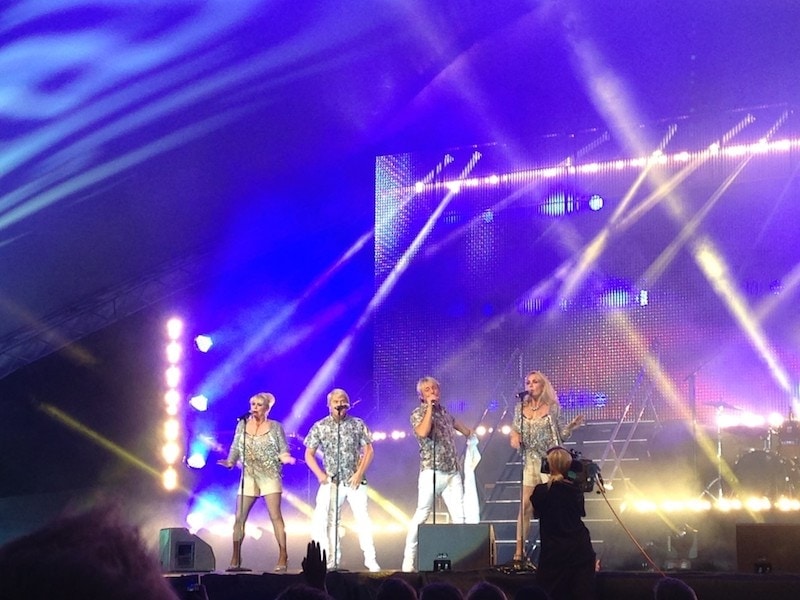 The Royal Palace – one of Europe's largest and most dynamic palaces. The Royal Palace of Stockholm is His Majesty The King's official residence and is also the setting for most of the monarchy's official receptions, open to the public year-round. The palace is built in baroque style by the architect Nicodemus Tessin and is formed as a Roman palace. The palace has more than 600 rooms divided between eleven floors with a state apartment facing the city and smaller living rooms facing the inner courtyard.

Vasa Museum – Stop at the Vasa Museum, the most visited maritime museum in the world. Marvel at the nearly 400-year-old wooden ship that is remarkably intact despite being underwater for more than 300 years. Enjoy a 30-minute tour of the museum, which will be the end of the guided tour. Book tour →

Royal Djurgården – board the Djurgården ferry for the short trip to the island of Djurgården. On the way, you’ll be able to see parts of Stockholm from the water, including Old Town and the island of Södermalm. Book tour →

Skansen – Skansen is the world’s oldest open-air museum, showcasing the whole of Sweden with houses and farmsteads from every part of the country. The venue also includes a funicular railway, aquarium and zoo. Book tour →

Gaily Tour in Stockholm – Start your exciting LGBT friendly walking tour from Gamla Stan, Stockholm's historical center. Here you will find the Swedish Parliament, Riksdag, and the Royal Palace. Continue towards the spectacular Vasa Museum, a very impressive museum displaying the historical 17th century Vasa warship. Your tour will end at Skansen Open-Air Museum, where you will be free to enjoy a spectacular visit to a unique museum that encompasses Stockholm's Zoo, a display of living history, and an exhibition on traditional Swedish festivities. Book tour →

Chokladkoppen – This cute and tiny café right in the center of Gamla Stan (Old Town) is a very well known gay hangout. It’s a good place to people watch (and maybe flirt) and also pick up flyers and information about upcoming events in the gay scene.

Mälarpaviljongen – This upscale restaurant, which only opens in the summer, is half on land, and half floating on the water. It advertises itself as a straight-friendly LGBT restaurant, and it’s an extremely popular option with locals, gay, straight and everything in between. Since the owner, Arto, has recently opened a vegetarian organic street food style restaurant just across the street, there are many options for vegetarians and vegans. This lakeside restaurant opens in the summer months only and is the perfect place to grab a beer in the sunshine and enjoy the long summer evenings with a cocktail, nice meal and a group of friends. 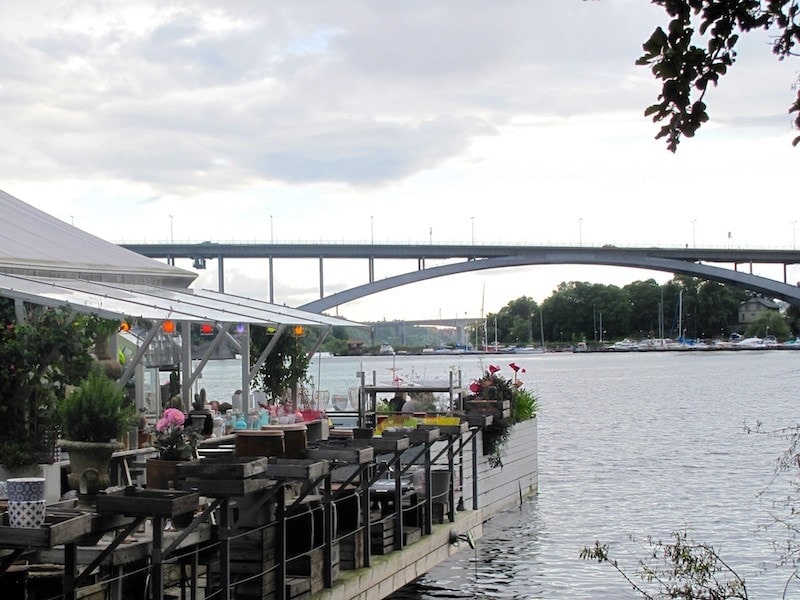 Mosebacke – With what is apparently Stockholm’s best view, this gay-friendly bar and restaurant located inside Södra Teatern, live music and art venue, does indeed offer stunning views over Gamla Stan and beyond. It’s a fantastic place for a sunset drink on a summer evening, mingling opportunities and also offers very nice food. The menu is pretty heavy on meat and seafood, but there is always at least one vegetarian option, which may be veganizeable.

The Secret Garden – This popular cafe and bar only opened in 2014 but has already become a firm favorite on the Stockholm gay scene. They host regular events and have an excellent wine menu. If you’re looking to eat here the lamb burger and chips come highly recommended.

7-Eleven – if you’re on a budget and looking for a quick bite, the local 7-Eleven convenience shops actually have a good selection of tasty and quick food options. You won’t find a better value of price, speed and surprisingly decent quality in all of Stockholm. 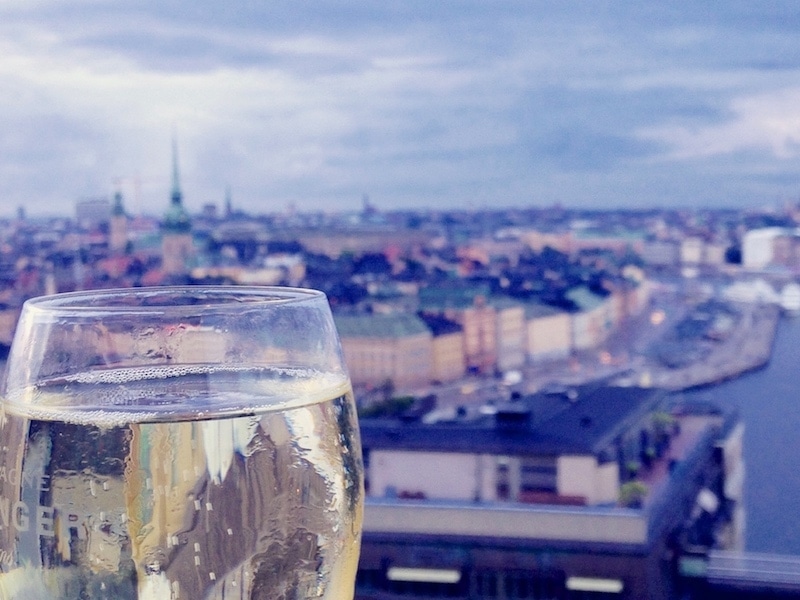 Sweden’s capital is home to over 2 million people and has one of the largest gay scenes in Scandinavia. The captivating, historic center compromises 14 islands, connected by over 50 bridges. The main cohort of gay action in Stockholm takes place around Gamla Stan. Here is a selection of top gay bars to check out when you’re visiting this super cool Swedish city.

SideTrack – This small but buzzing venue is always packed with locals and tourists looking for an unpretentious evening where the emphasis is on having an excellent time. They serve food until 11 pm, at which point things really start to get lively in this gem of a gay bar in Stockholm.

Patricia – This former British vessel, which served in Dunkirk during WW2, is now a bar, restaurant, and nightclub. Docked on the waterfront in the trendy Södermalms district, it is not actually a gay venue but their legendary gay night every Saturday has become the place to party into the small hours.

King Kong – Despite being the new kid on the block, this poptastic gay bar fills its two dance floors every Saturday night with a young crowd looking to drink and party to mainstream beats. They also host Sunday brunches on an ad-hoc basis.

Club Backdoor – this gay club was opened in the fall of 2017. Since then the club was an Ahlbom Family immediate success and it’s now one of Sweden's largest and most popular gay clubs. On Friday they play hits and raj raj and on Saturdays, both House and techno acts as well as hits.

Stockholm Gay Pride – There are three main components to Stockholm’s Pride: Pride Park, Pride House, and Pride City. Pride Park is where all the action can be found. A large stage hosts great performances from the famous to the up and coming. Many exhibitors have booths setup where you can gather information on relevant LGBTQ issues, get free HIV testing or pick up some free underwear at Bjorn Borg’s booth. While Pride Park hosts the entertainment, Pride City is the cultural aspect of the event. Various exhibitions, films, discussions, and workshops throughout the week focus on political and cultural LGBTQ issues. As Scandinavia’s largest Pride festival, Stockholm Pride brings out a diverse crowd of all ages and orientations. Families, foreigners, and sexy Swedes all turn out throughout the six-day event. All are welcome and every type of person under the rainbow happily attends.

Stockholm Archipelago Sailing Tour – Explore the pristine beauty of thousands of islands in the Stockholm Archipelago on this full-day sailing tour. Hop aboard a comfortable yacht to discover untouched wilderness, and make this a truly relaxing day on the water. Book tour →

Kayaking Tour in the Archipelago – Embark on a day-long kayak trip to explore the Stockholm Archipelago. You’ll paddle at an easy tempo with your guide among thousands of uninhabited islands, discover the area’s wildlife, and enjoy a tasty lunch in the wilderness. Book tour →

Note: Some of these links are affiliates which means using them won’t cost you any extra but we do receive a small commission for each referral. You're not obligated to use them but we appreciate it if you do. Thanks in advance for supporting this site if you choose to use our link!