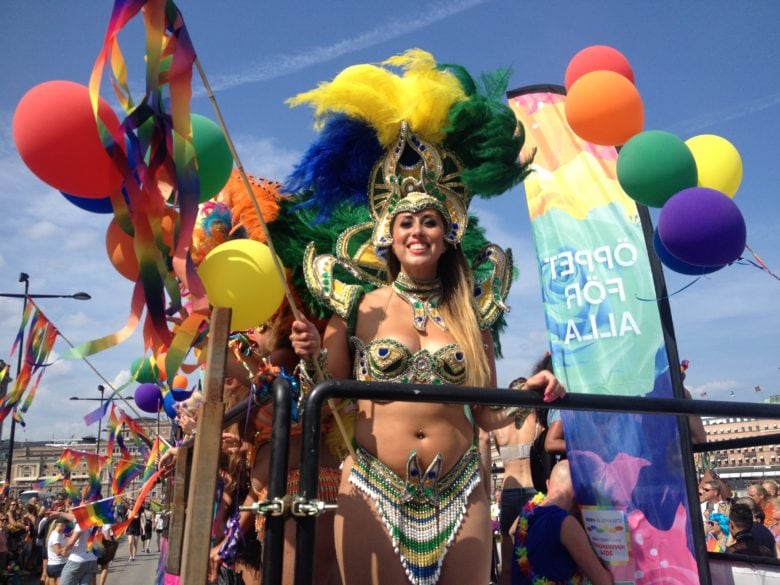 Royal Palaces, Nobel Prize ceremonies, thousands of islands, mesmerizing architecture, and the ABBA Museum. Stockholm is a gorgeous waterfront city that literally has it all. When we first visited Sweden’s capital last year, we were immediately taken by its undeniable charm. As the country’s largest city with a population creeping above 2 million, this Scandinavian metropolis is a must visit when touring Europe. Gamla Stan, the city’s Old Town, is a beautiful place to stroll around, grab a bite to eat, and admire the colorfully detailed buildings splashing up along the city’s never ending coastline. 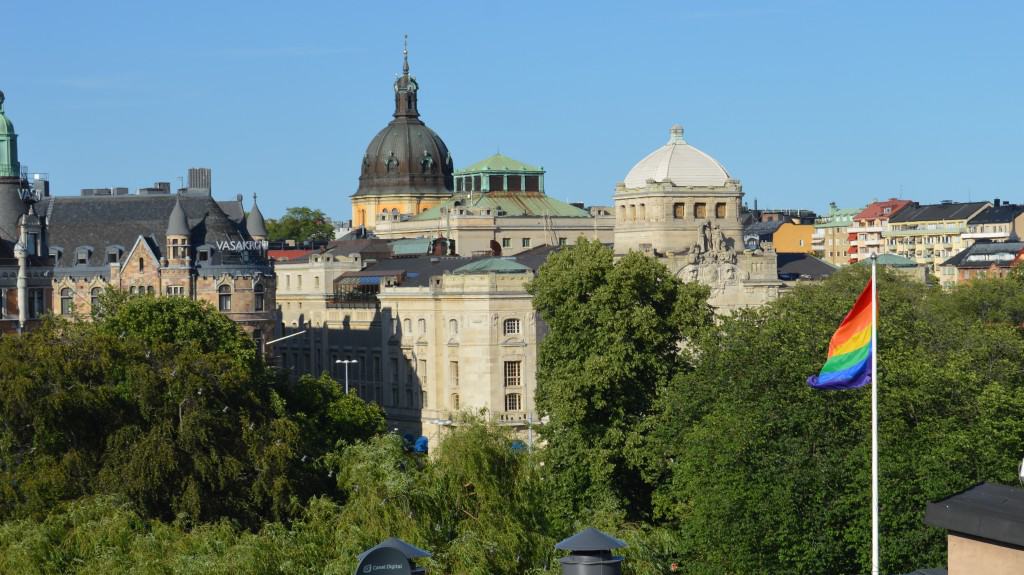 Stockholm Gay Pride has a great line up of events every year and is one of the most organized Pride events we’ve ever attended. There are three main components to Stockholm’s Pride: Pride Park, Pride House, and Pride City. Pride Park is where all the action can be found. A large stage hosts great performances from the famous to the up and coming. Many exhibitors have booths setup where you can gather information on relevant LGBTQ issues, get free HIV testing or pick up some free underwear at Bjorn Borg’s booth. Of course, food abounds and alcohol flows at the Park as well. While Pride Park hosts the entertainment, Pride City is the cultural aspect of the event. Various exhibitions, films, discussions, and workshops throughout the week focus on political and cultural LGBTQ issues. Stockholm Pride is not just reserved to certain areas of Stockholm. With Pride City, the whole metropolis gets involved with businesses all over town waving rainbow flags and some offering special discounts, offers, and events in honor of Pride.

The Gay Stockholm Pride Parade is a glorious display of the city’s Queer Pride with participants reaching up to 60,000 and spectators up to 600,000. The whole city comes out for this glamorous show of marchers, floats, musical acts, and costumes. Expect to see a wide range of attire including shirtless hunks, decked out divas, cross-dressing, and even everyday normal wear. Like most gay themed events, anything goes! The parade usually lasts upwards of three hours along the route. 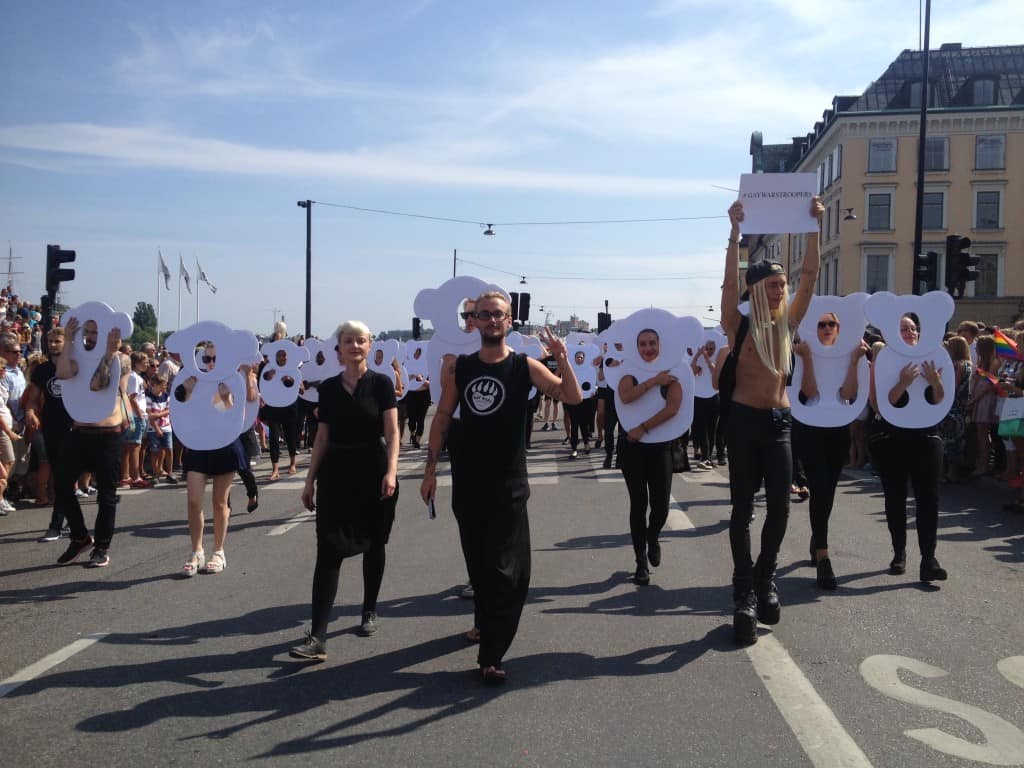 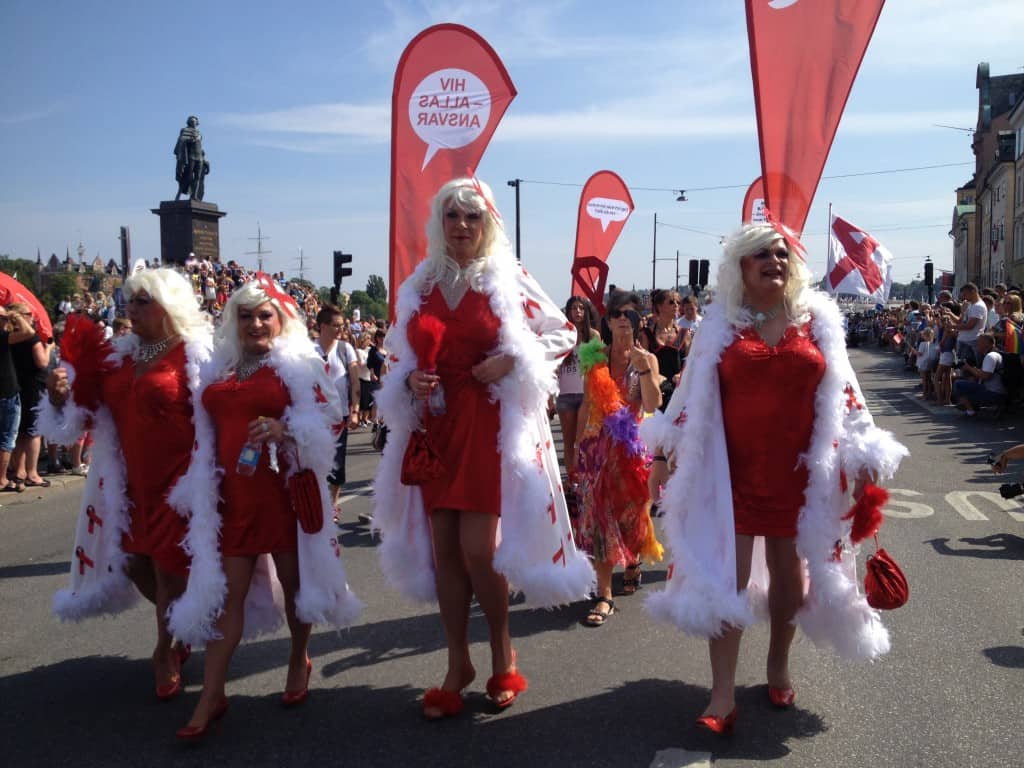 Stockholm Pride brings out a diverse crowd of all ages and orientations. Families, foreigners, and sexy Swedes all turn out throughout the six-day event. All are welcome and every type of person under the rainbow happily attends. 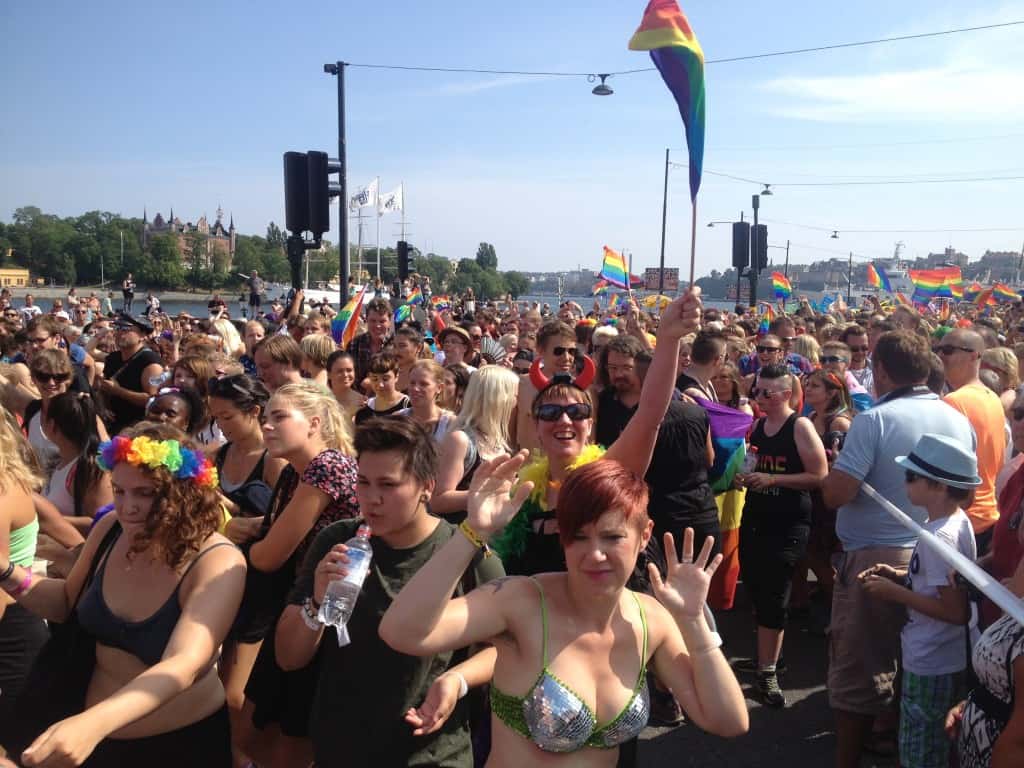 Like most Scandinavian cities, Stockholm is not a cheap place to visit and nor is its Pride a budget-friendly event to attend. This past year festival passes for the whole week went for 800 sek (US$115), day passes for Pride Park were 400 sek (US$58) and a Pride House pass was 300  sek (US$43). If you can believe it, these prices are actually a good deal lower than the year before. You can expect to pay similarly high prices for food and drinks once you enter the Park as well. It’s not that they’re overpriced, just that it’s an expensive place to visit in general. However, with as well organized as Stockholm Pride is and the amazing artists performing and activities going on, you definitely get what you pay for.

As Scandinavia’s largest Pride festival, there’s a lot about this annual event that makes it stand out. One of the truly uniquely Swedish aspects to it is the Schlager on Thursday night at the Pride Park every year. This is the highlight of the week for many as musical acts perform some of their biggest hits including musicians from Melodifestivalen, a Swedish music competition, and Eurovision. As a foreigner not aware of Swedish culture, this may be just like any other night, but it’s a good opportunity to enjoy what the locals love.

Another special quality to this Pride is the dog tag that is designed and sold specifically for this event. Each year a designer is chosen to create the dog tag that will be Stockholm Pride’s representative jewelry for the event. Dog tags are specifically reserved for those attendants who purchase the week-long festival pass. This year’s dog tag was a leather bracelet engraved with a note: “Celebrate Diversity”. 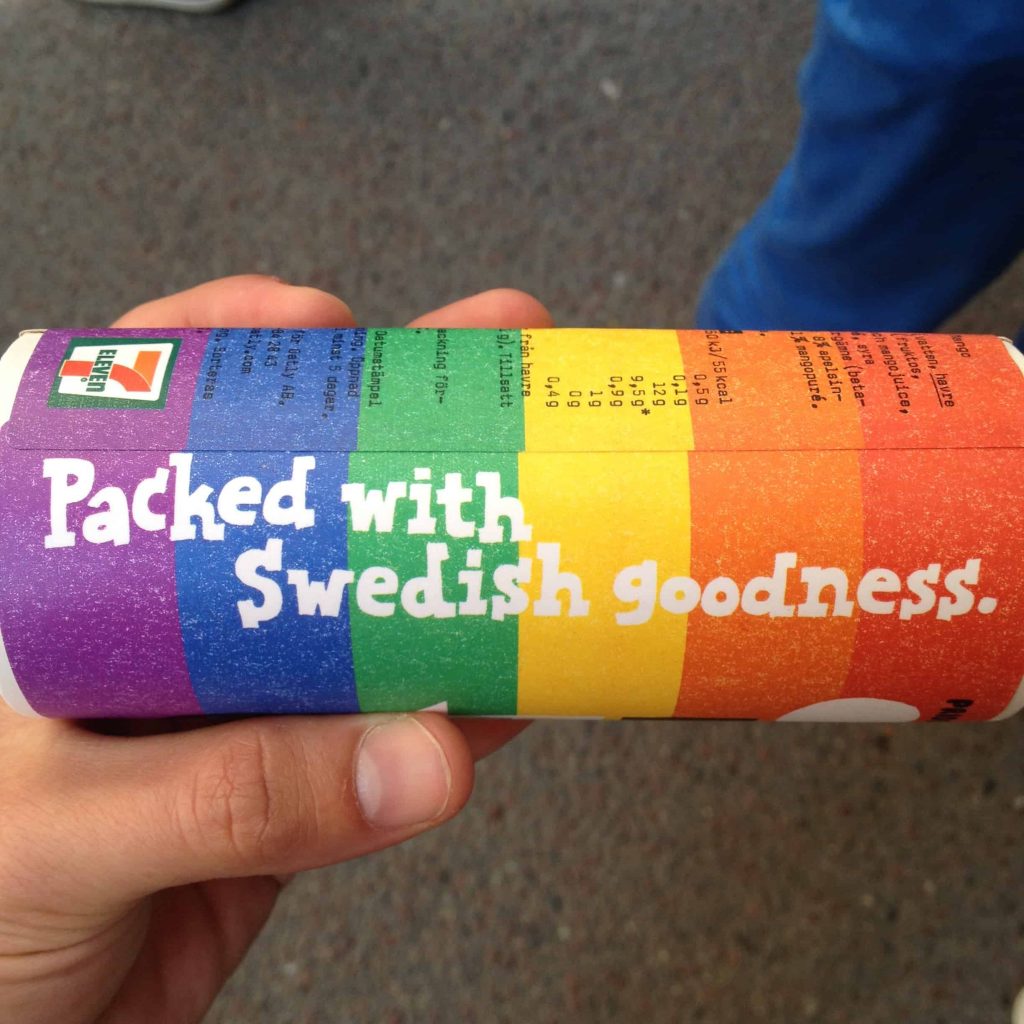 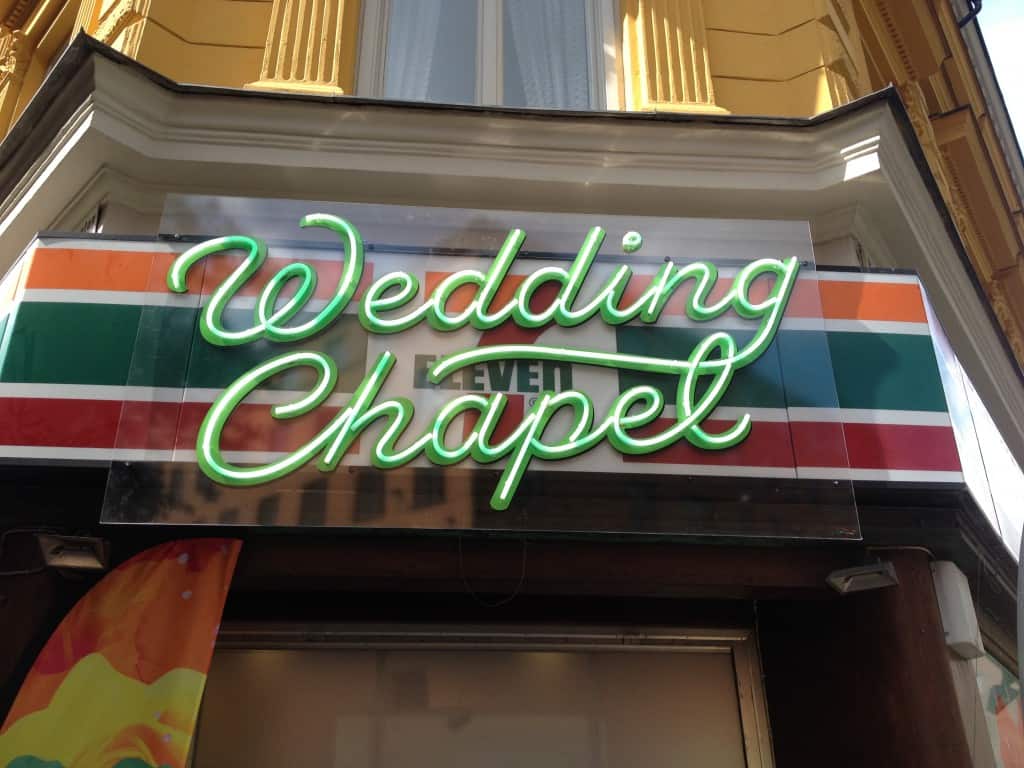 As a very open, friendly and liberal city, Stockholm lacks a gay neighborhood in a good way. There’s no need! Gay Stockholm bars, clubs and restaurants are scattered throughout the city attracting both gay and mixed crowds. There’s a range of distinct venues that any gay Stockholm guide will mention like Patricia, a restaurant/club on a former yacht that’s Sunday’s dining and dance spot or Malarpaviljongen, one of the best restaurants/bars to grab an evening cocktail in the summer on the water. Aside from the more unique places, there’s plenty of great clubs popular for gay/mixed clientele on special nights like Glory at Berns on Wednesdays or Zipper Stockholm on Saturdays.

Stockholm Pride has been occurring every year since 1998 when it first hosted EuroPride. It also hosted EuroPride for a second time in 2008. The Pride is put together annually by the independent non-profit organization called Stockholm Pride. The rainbow colored symbol of Stockholm Pride that’s still used today was created by Andreas Gunnarsson in 1998 for the EuroPride held that year. The wavy shape represents Stockholm as a city on the water.

Visiting Stockholm Pride on a budget is not an impossible task and you can read some of our tips on how to do so. One of the best ways is to volunteer for the event. Not only will you get free entrance to the Pride Park, but you’ll also have the opportunity to meet new friends and put your time toward a great cause. Costs aside, another way to get the most out of Pride in Stockholm is to attend the Mr. Gay Sweden contest which is also held every year in conjunction with Pride. Lastly, though drinks may be expensive at the Pride Park, do not think to bring in alcohol. They’ll check for it at the entrance and even do the sniff test. It’s best to drink beforehand or just cough up the dough.

For more information about LGBT travel in Stockholm, check out the Stockholm gay & lesbian blog.

Have you ever visited Stockholm or attended Stockholm Pride? What did you love or not love about it? Let us know below!

8 Comments on “A Guide to Stockholm Gay Pride”