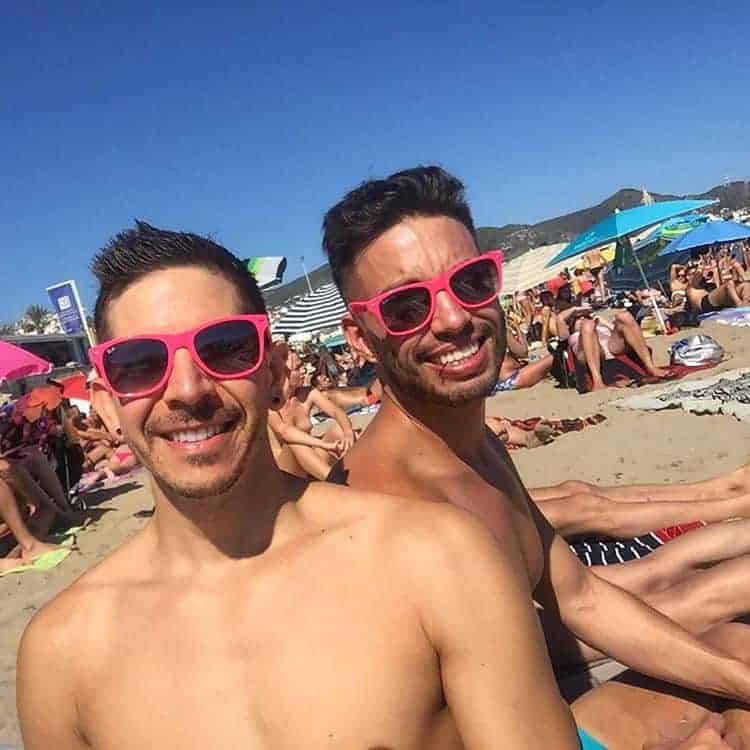 Well-established on the LGBT travel map, it's likely either you or someone you know has raved about this sea-side Mediterranean city. And for good reason – Barcelona boasts a cosmopolitan and welcoming environment for all types of travelers from every corner of the globe. Barcelona is one of those cities that has so much to offer, you can never see it all.

Though busy, the summer months are a great time to visit because of epic LGBT events like pride in July and the famous Circuit Festival in August. Even if you don't plan your trip around one of these gay events, you can find plenty of gay places to go and things to do when spending a day in Barcelona.

Barcelona’s city-side beaches make it one of the best well-rounded destinations in Europe. Just steps from the city center and along 4 additional kilometers, you can find plenty of beaches to satisfy your summertime lounging needs. There are two different gay beaches in Barcelona to choose from. The first is called Platja de Sant Sebastià near metro Barceloneta, which is closest to the city center. You’ll find a mixed crowd in this area since many visitors also come here to relax at Barceloneta beach. The other gay beach is called Platja de la Mar Bella near metro stop Poble Nou. This clothing-optional beach, like most nude beaches, is farther out from the center on the northern end of the city’s beachfront. This is where you’ll also find the popular hangout called Chiringuito BeGay, a restaurant and bar where the gays go have a drink or a meal while taking in the afternoon sun.

Circuit Festival is the largest and the most well-known gay festival in the world. Started in Barcelona more than a decade ago, the event attracts 70,000 gays from all over the world. The festival returns each summer for 2 full weeks. The event in Barcelona runs during August is centered on the parties that vary in location be it a pool party, beach party, club or water park. 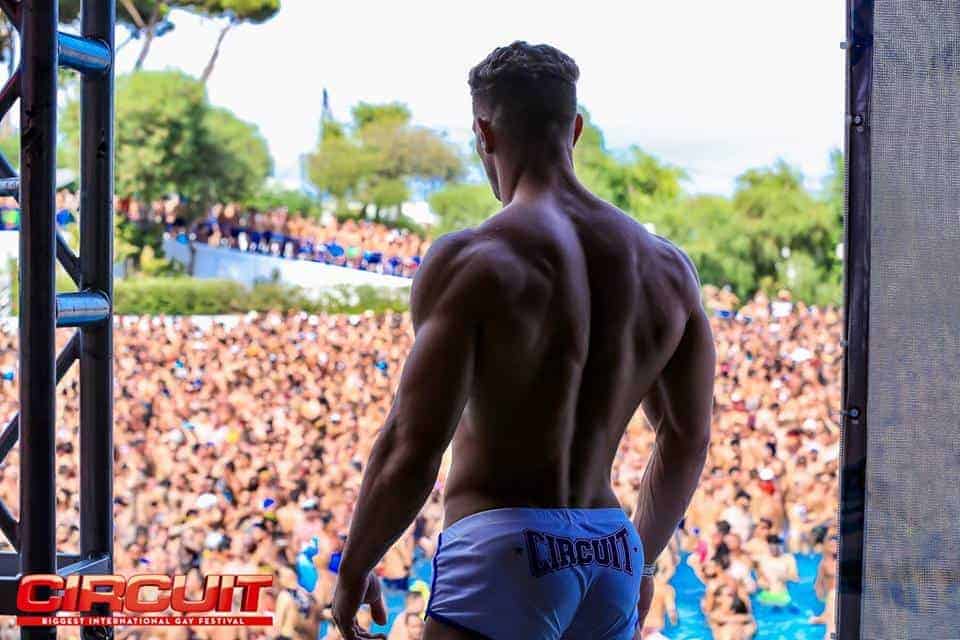 Hang Out in Eixample

One of our favorite things to do in Barcelona is well, nothing. Or to be more exact we really enjoy just hanging out in the neighborhood and relaxing with friends at a local restaurant and bar. There’s nothing better than sipping a beer or cocktail in the afternoon sun and enjoying a relaxing conversation with good company. We would of course hang out in Barcelona’s gay neighborhood Eixample, often called “Gayxample” among the locals. The neighborhood is centrally located in the city and depending on the time of day, there are several gay restaurants worth visiting including El Berro, The Bench and The Pink Elephant. As day turns to night, this is where you’ll find most of the gay bars and clubs in Barcelona including Café Bar Punto, Axel Sky Bar, Night Barcelona, Metro Disco and the various Arena dance clubs.

Matinee is a popular brand that hosts gay parties throughout Spain and this big one occurs Easter Weekend in Barcelona. It’s not nearly as big as the famous Circuit Festival, but it’s still a large event of several parties over a long weekend in the sunny and warm Catalan capital on the Mediterranean. If you’re looking for something to do Easter weekend, Barcelona might be a good choice for it’s warm and mild weather, plus all the locals and visitors than come in for this awesome weekend of packed parties.

You can find amazing and delicious food in Barcelona and the combination of Spanish, Catalan and Mediterranean cuisine make for a great mix. Barcelona is also a very popular tourist destination which means it’s also easy to find bad and overpriced food. One of the most authentic places to go is the old fisherman’s quarter in Barceloneta. Once a slum designed to house residents who were kicked out of the city center, this neighborhood is now one of the most popular. Many of the bars here serve fresh seafood and fish tapas made of high-quality ingredients at reasonable prices. There’s a good chance that the smaller and more simple the place looks, the better the quality food you’ll likely find there. One of the best places to eat in Barcelona is La Cova Fumada, a family-owned place for more than 50 years with some of the most delicious food located right in the neighborhood of Barceloneta.

Looking for a guided food tour in Barcelona? Check out the tours from Devour Barcelona Food Tours, where the only challenge is deciding which delicious tour to take. We've done a tour with this company before and highly recommend them. You can even check out their 5-star reviews on TripAdvisor. Book tour →

The Axel Hotel chain started in Barcelona and now has properties in Berlin, Maspalomas, Ibiza and Madrid. The group is the most well-known gay hotel chain and coined the term “hetero-friendly.” Whether you stay at this hotel or not, you should least stop by for a drink. They currently have two properties in Barcelona, but the original has our favorite rooftop terrace called Axel Sky Bar. It’s worth a visit and also has a pool with plenty of loungers to take in the sun during the day or enjoy cocktails at night.

Tibidabo is the tallest mountain surrounding Barcelona with amazing views looking out over the city and sea. From nearly anywhere in Barcelona, you can see the mountain peak and the famous church called “Temple Expiatori del Sagrat Cor” built at the top, which started construction in 1902. Just to the side of the church is the Tibidabo Amusement Park, which was built and opened around the same time frame. Tibidabo is the longest-running amusement park in Spain and the third in all of Europe. You can reach the top of Tibidabo by taking the funicular from the base of the mountain. The funicular is easy to reach by taking train L7 from Plaza de Catalunya and then transferring to a bus. Buy entrance → 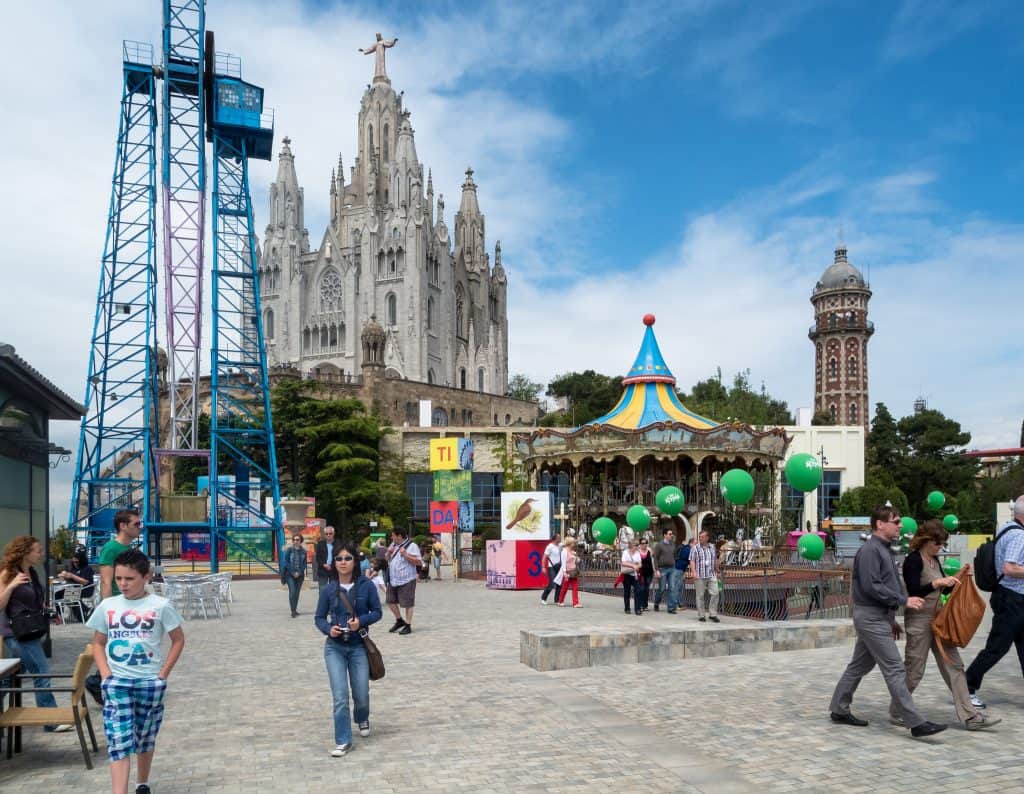 Pride Barcelona is the most inclusive event in the city, where everyone has a place, where all associations, companies, organizations and government groups come together to celebrate the rights and progress of the LGBT community. The event gets bigger every year, with the support of everyone who attends. It may not be the largest in Spain, but it still makes a large impression. The event includes activities like the high heel race, Miss Drag PRIDE Barcelona, an excellent (and free!) outdoor foam party and even activities for kids. The parade on Saturday afternoon attracts roughly 200,000 people and there are plenty of pride parties around the city through the weekend. Plus there is a central pride village located right in front of the beautiful Palau Nacional where you can meet daily for performances, food, drinks and more. 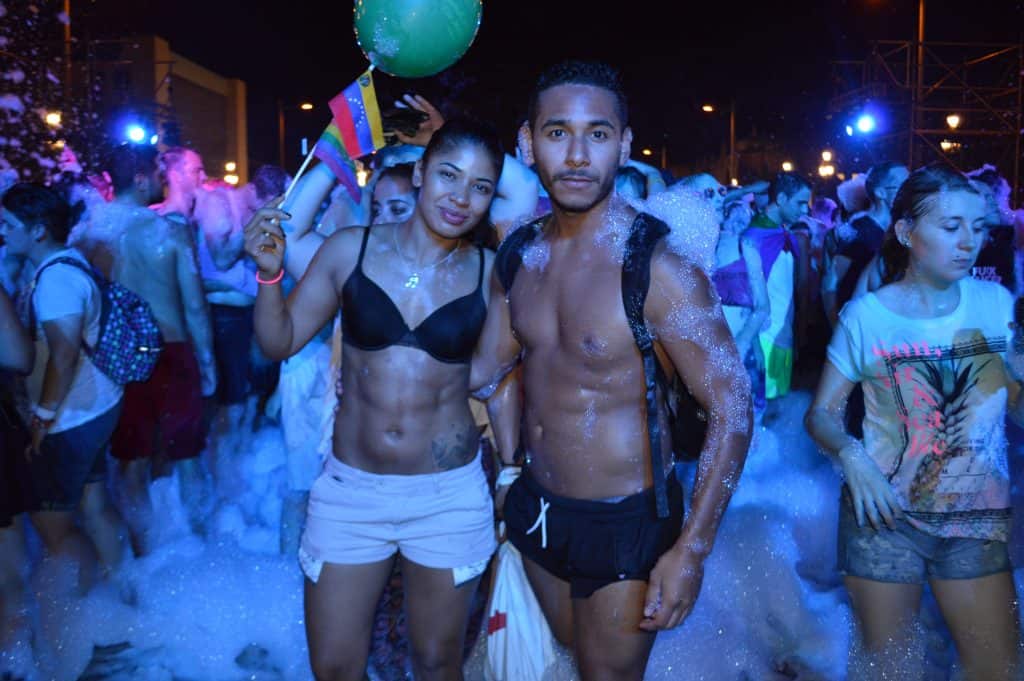 What better way to get to know Barcelona than taking a guided tour from a local? Exploring Gaudi’s famous works, the Gothic Quarter and nightlife tours are just a few options to consider when visiting. Not only are their guides knowledgeable about the history, architecture and sights, but they can also give you great local tips on the gay scene since popular nights and venues can change often. Book tour →

Make a visit to one of Barcelona’s most beautiful parks and ditch the crowds while you’re at it. The Parc del Laberint is Barcelona’s oldest garden and was designed in 1792. It is intricately designed of lush vegetation and a large maze in the center. The park is a bit far from the city center so the trek will take you about 45 minutes by train. But once you arrive, you’ll be rewarded with a tranquil atmosphere, nice paths and beautiful views. This is a great place to go during Barcelona’s high season because most of the tourists either don’t know about the park or choose not to make the trip out. 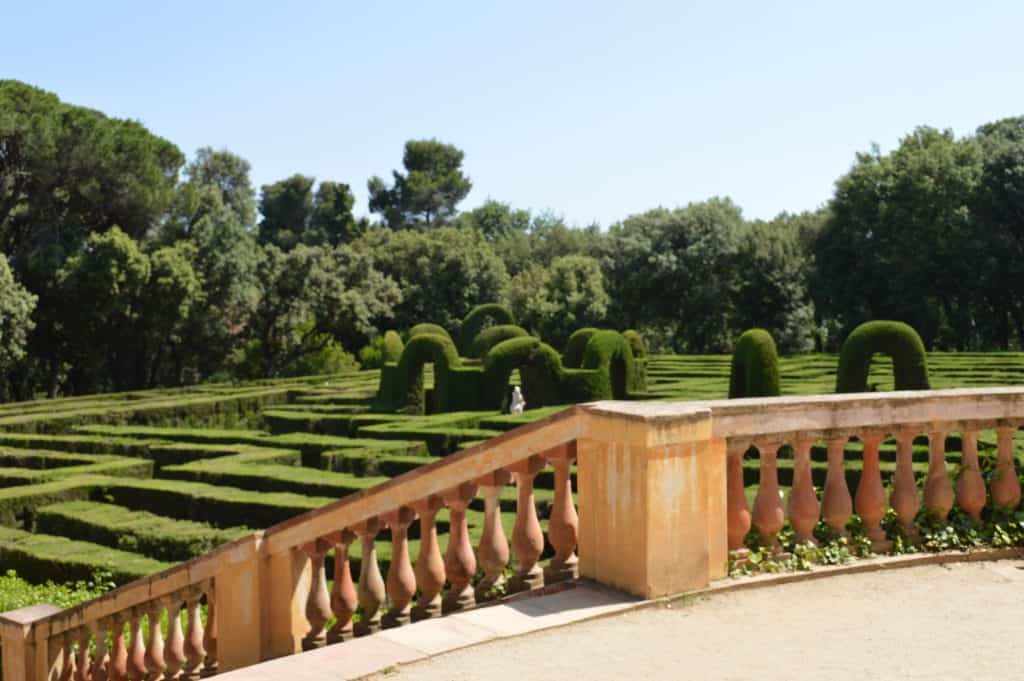 What's your favorite gay-friendly destination? Have you visited Barcelona before? Let us know in the comments below!