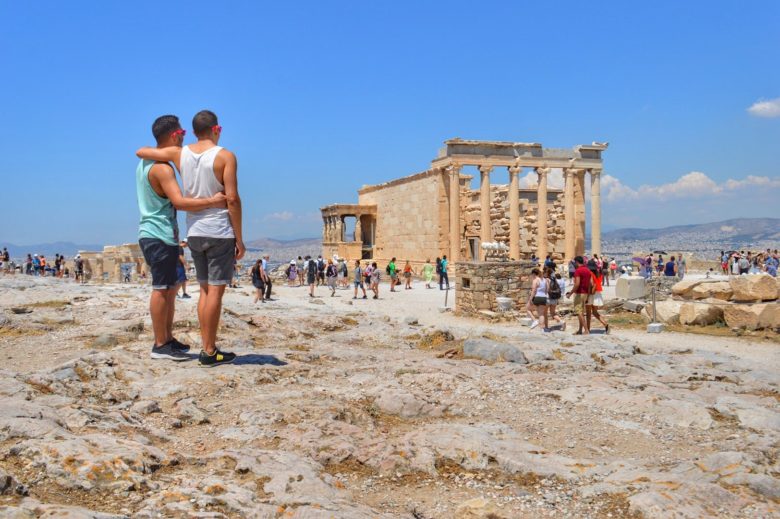 Athens may not be the most beautiful of European capitals on the outside but don’t let your eyes fool you. Sure, it doesn’t have the elegance and architectural appeal of other cites but Athens makes up for it with amazing and historic sites and a vibrant scene found in its bars, clubs, restaurants, and cafes. Athens does actually have a well developed gay scene, but Greece is still a bit closed and not particularly accepting so you’ll need to know where to look.

A lot of Greeks still live partially in the closet, but Athens is the place where you’ll find the largest and most progressive gay scene year around. Gazi is one of the more popular neighborhoods and you’ll find plenty of gay and gay-friendly venues in this area. Over time, it has become slightly less gay-focused as it’s become gentrified but as a first-time visitor, it’s still the place to start.

You can download the Gay Athens guide for free. Just provide your email address and we’ll email you a PDF. 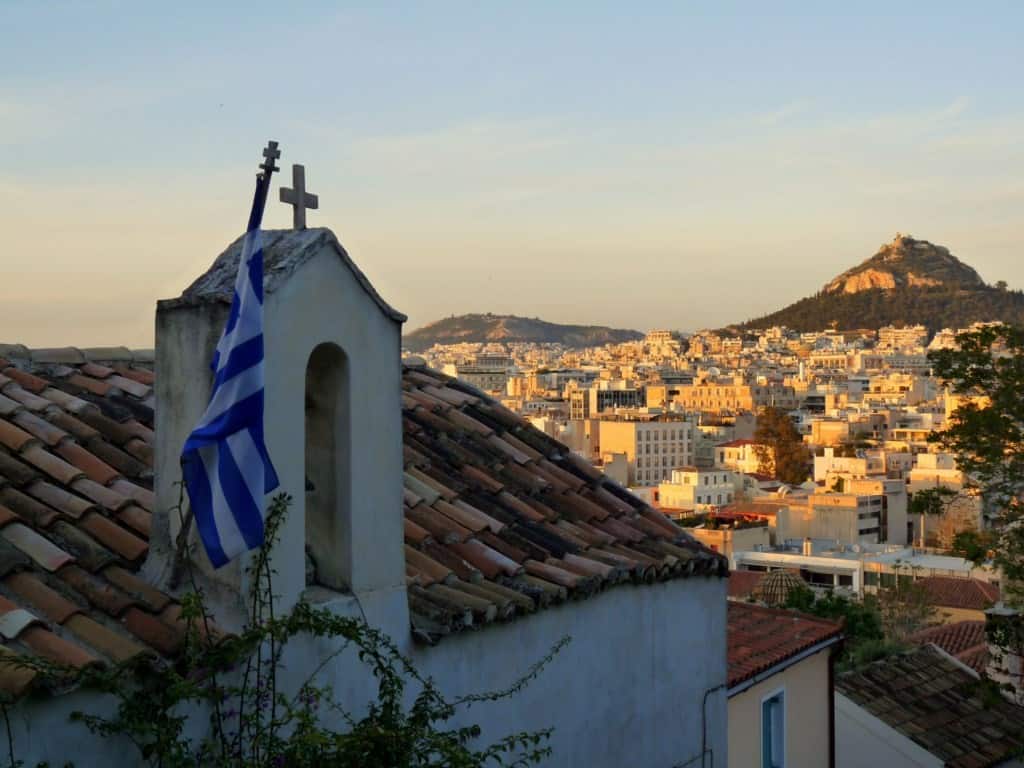 Athens has a well developed public transport system and you can get just about anywhere without a car. It’s still a relatively cheap city and even taxis are not expensive. You can reach the city center from the airport by taking the metro line 3 which costs 10€. Express buses also operate from the airport and drop you in several central locations. There are plenty of direct transfer as well that will take you directly to your hotel or accommodation. The ride will take you about 45 minutes to an hour. You can buy multi-day tickets which include your airport transfer which may be a good option since Athens is a bit spread out and not necessarily a compact, walking city.

A for Athens – Well within walking distance (15 minutes or less) of Flex Sauna, Eagle Bar Cruise Bar, and other gay bars in Gazi. Don't miss the panoramic view of the Acropolis from the rooftop terrace. 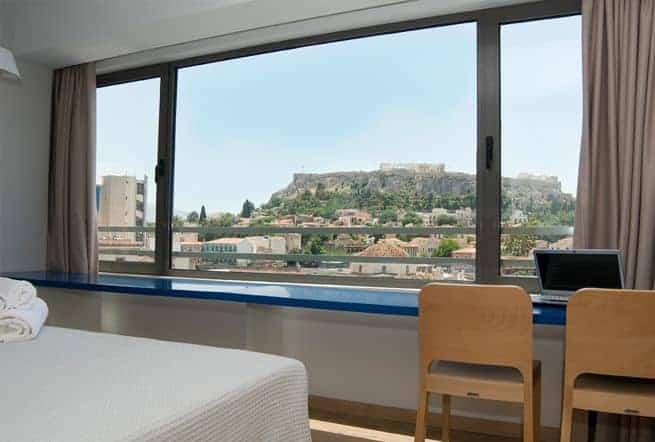 Photo via A is for Athens

McQueen – Kitchenettes and suites are available. Free breakfast and Internet with bar/lounge on-site. High marks for cleanliness and service.

The Margi – Luxurious yet charming with free breakfast/Internet/parking and a fitness center, pool, bar/restaurant on-site. 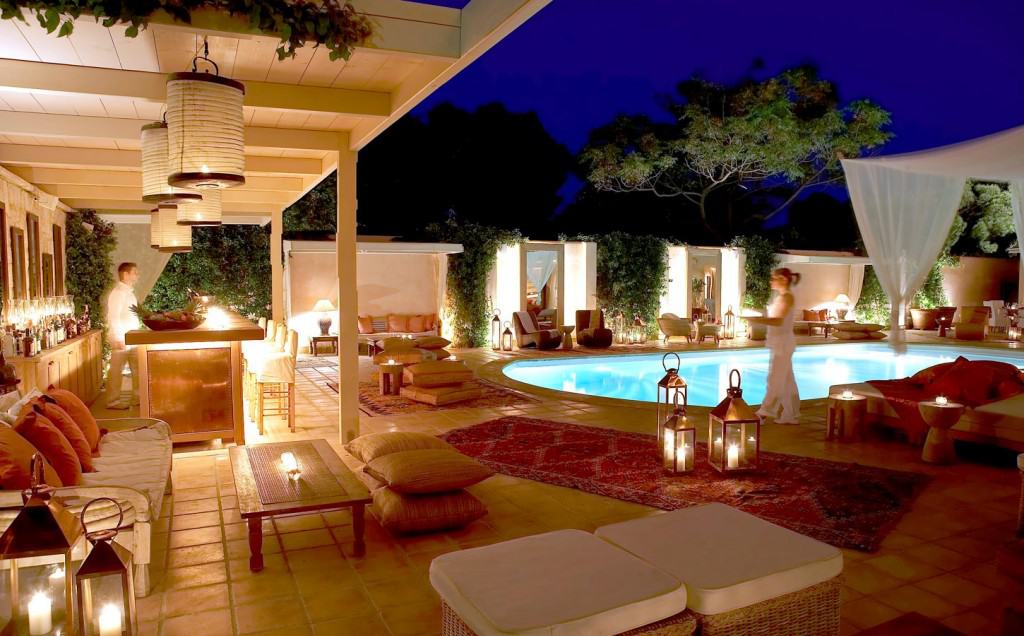 Photo via the Margi

There are many sites for apartment rentals in Athens, with AirBnB probably being one of the most popular. Prices are generally comparable to budget hotels, especially if you’re willing to get a room in a shared apartment. Book AirBnB →

There are even a few LGBT-oriented booking sites like misterb&b with listings from gay hosts for gay guests where you can either rent a whole apartment or a private room in a shared apartment. Understanding Athens’ gay scene is much more easily done with the help of a local and apartment sharing is one of the best ways to meet someone living in the city who knows how things work, where and when are the best nights to go out, and what places to eat at and which to avoid.

Acropolis & Parthenon – one of the most visited monument in the world – definitely Greece's most famous. In terms of execution and conception, the Parthenon is the finest monument on the Acropolis. Consider taking a guided tour to get the full story. Book tour →

Temple of Olympian Zeus – you can see this from just about everywhere, but up close and personal is a must! The temple is the big draw but be sure to visit the gardens north of it.

Plaka Neighborhood – Eat and shop… our favorites! Restaurants and shops on every corner with a busy, bustling atmosphere.

Pandrossou Street Market – great prices on more food and more. This is a cool area of town with plenty of shops, stands and street performances. 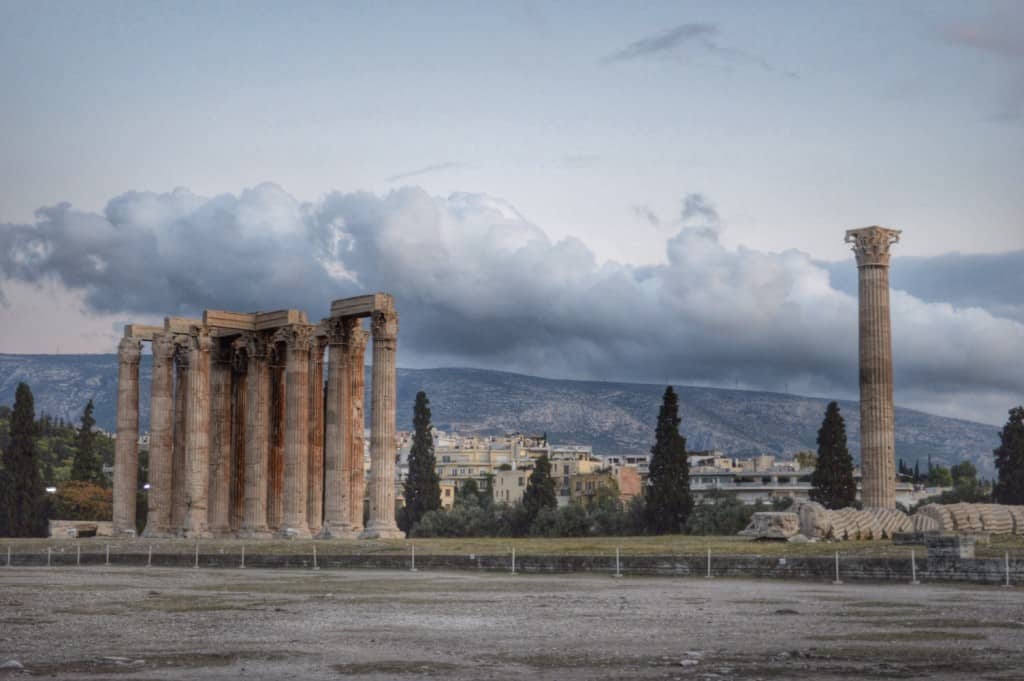 Greece is an interesting destination for LGBT visitors given the queer history that existed during ancient times. Ancient Greek men are well-known for having a history of same-sex relationships including some of the most famous like that of Alexander the Great or even characters from Plato’s Greek Tragedies. You can explore the history on your own at the museums of Athens, but you’ll get a more intimate experience by taking a tour.

Tales of Same Sex Love – a tour from Big Olive Walks that will take you through a journey of ancient homoerotic love in Athens. On your walk, you’ll discover world-famous landmarks as well as relatively unknown sites. From gods and heroes to writers and philosophers all with stories of famous love affairs.

Midnight Rainbow Private Gay Tour – Athens is a place with a long history of sexual liberalism and offers a wide range of choices for its LGBT communities to meet, interact and party. Greece is also considered by many the birthplace of gay culture, as homosexual relationships were quite common in ancient Greece. Today, it follows the European standards and is considered a very safe place for gay communities, with a wide pool of gay bars, cafes and restaurants. Book tour →

Athens LGBTQ Culture & Hangout Spots Private Tour – another tour from a local we met named Stavros. This one is a rather interesting tour that we’ve actually taken ourselves. Let’s just call it what it is…a gay cruising and nightlife tour. But don’t judge too quickly. Your guide will take you around the city to show you some of the real cruising spots, both past, and present and also describe the local gay culture in the city pointing out local gay hotspots and meeting points. If you hang out til the end, the tour ends up at the famous Alexander Sauna though entrance isn’t required. Book tour →

Yes, Athens does have a gay beach. It may not be close to the center and it may not have soft sandy beaches, but it exists and it’s a place gay locals and visitors go to cool off in the warmest months of the summer. It’s about 35 minutes outside the city by car or alternatively, you can take the E22 bus there from Syntagma Square. This is both a gay and nude rocky beach (aren’t they always?) with clear waters and some secluded corners for those looking for that sort of adventure. This is a great place to sunbathe, relax and spend some time outside the city.

Prosopa – Very gay-friendly. Amazing pork, chicken filets, pasta and risottos all priced reasonably. Try these: tenderloin with fig and espresso; a salad with graviera (greek cheese) and pear; or risotto with the pumpkin.

Kuzina – High marks for cuisine and even higher marks for atmosphere. Some favorites: braised rib of beef, chicken with veal; zucchini balls stuffed with cheese; and grilled meatballs with sumac pitta bread spearmint yogurt sauce. If you're really hungry, try the rolls filled with sun-dried tomatoes, eggplant, and lamb as an appetizer.

Kanella – An interesting mix of clientele shows up here. This modern taverna is moderately priced and a good place to people watch while you eat.

Myrovolos – Lots of girl on girl  action in the happening bar at night, and during the day portrays itself (very convincingly) as a popular pizza restaurant/cafe that opens its doors at 11am. 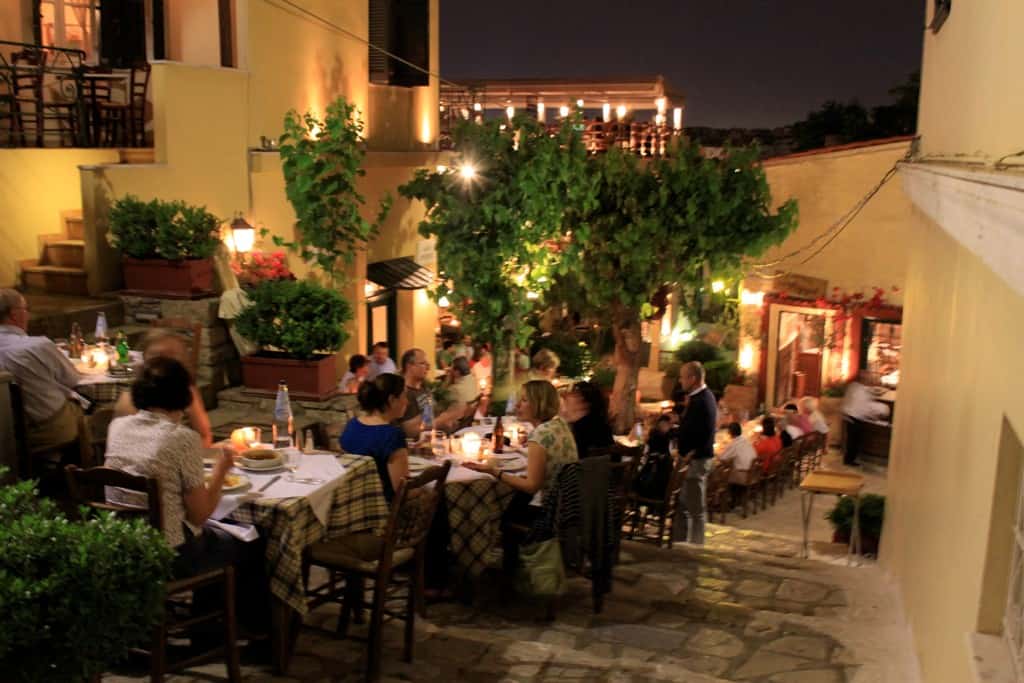 It’s important to note that the gay scene in Athens is less public compared to gay hotspots like Mykonos. But equally so, the scene here is much more regular and local as opposed to seasonal and tourist driven like you’ll find in the islands.

Kouckles Club – If you love comedy and stage performance, you must stop here for nightly cabaret bar and drag shows.

En Merei – Stay for a while or stay all night at this amicable lesbian café-bar. Music: 80's until the present day.

Noiz – Another lesbian club with upbeat music and a warm décor. It's okay boys… you're welcome here as well. Just bring your own date!

Bequeer – open on weekends and offering up an awesome drag scene of Athens. The host new shows every weekend with a team of Athenian drag queens each Friday and Saturday night. Entrance is just 5 euro, which includes a beer.

Sodade 2 – After 13 years, it is Athen's most famous gay nightclub. DJ's play several types of music for 2 dance floors.

The Apartment – Only open Friday and Saturday nights, the go-go dancers and shirtless staff make this one of the most popular gay house music venues in Athens. 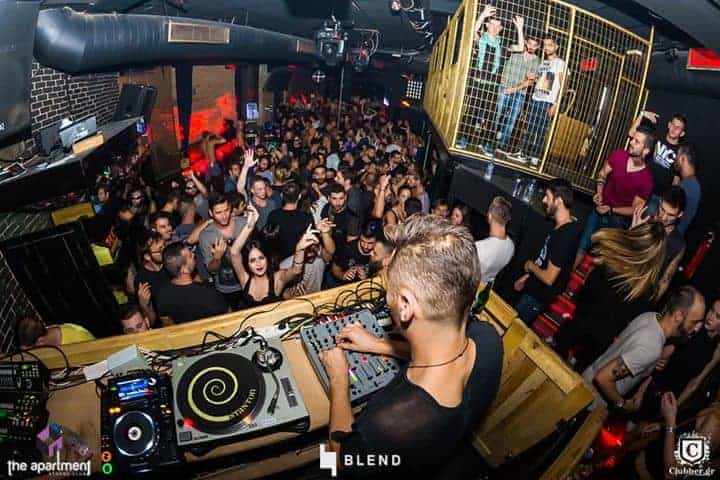 Photo via The Apartment

TAF (The Art Foundation) – not specifically gay, it’s gay-friendly and has a relaxed scene offering art, drinks and a vibrant alternative and hipster crowd that is welcoming to anyone.

Alexander Sauna – this is Athens' most popular gay sauna located in the heart of Gazi. You can’t miss the Alexander – it’s one of the tallest buildings in the area with a huge rainbow flag on the side. It’s a clean facility with 4 floors of different spaces. Entrance is 15€ or 7€ if you’re under 30 years old. Address: Megalou Alexandrou 134

Ira Baths – this is one of the oldest saunas in Athens, but it’s still fairly popular among locals. Located in the Omonoia area. Address: Zinonos 4, Athens

Athens Gay Pride – celebrated now for 10 years and takes place in early June. It’s not the biggest or most progressive pride you’ll find in Europe, but it’s still a fun and interesting event and one worth planning a trip around if you have some flexibility. The parade is the highlight of the weekend which takes place Saturday evening. You’ll also find several morning activities on Saturday followed by a large outdoor show and party after the parade. The number in attendance is about 20,000 and even the mayor of Athens attended in 2014 for the first time, a big milestone for the local Athenian LGBT community.

Outview – Held annually in Greece, this is one of the biggest and best European gay film festivals. Films by worldwide lesbians and gays are showcased here much to the delight of their LGBT audience.

Marathon – Here's the story behind the run: upon receiving the stunning news of a battle victory, “Phidippides” (an Athenian messenger) ran an astounding 26 miles to spread the happy news to Athens. This is his run. A marathon directory can be found here… very helpful. The original course and a much more compact info/registration site can be found here. Bus: 1 hr. 20 minutes for $3-$4. Book tour →

Temple of Poseidon (@ Cape Sounion) – there are a variety of tour types. The panoramic attributes are nothing short of mystical and magical. If you can plan your tour around a sunset… do it! Bus to Sounio 2 hrs at $11-$12. Book tour →

Delphi – you seldom see a real, honest to goodness, 5 out of 5-star rating, but here it is! Don't make the mistake of thinking, “oh, it's just another bunch of ruins”. Peaceful yet magnificent. Majestic but humble in its holy reverence. Tours of all types are available for every wallet. You will never forget your visit to Delphi! Bus: 2 hours and 45 min at $12. Book tour →

Note:  Some of these links are affiliates which means using them won’t cost you any extra but we do receive a small commission for each referral. You’re not obligated to use them but we appreciate it if you do. Thanks in advance for supporting this site if you choose to use our link!

Featured image by Keith Parker via Flickr / CC BY