Los Angeles – it’s one of those international cities with lots of fame and appeal. Countless people go there to make it big – music, TV and film – it’s all in Los Angeles. And thanks to Hollywood, it has a reputation known around the world and it’s been a hotspot (and currently still is) for film, culture, history, LGBT rights and more. It’s undeniable that LA is a popular tourist destination and so many people from around the globe visit each year. The tourism numbers alone show this with 5.2 million annual visitors, in the top 20 of the most popular destinations in the world.

What’s so great about LA? Ok, so not everything is perfect in Los Angeles, but you take the good with the bad, right? Yes, the traffic is horrible and getting around takes time given the massively widespread layout of the city. Public transport is marginal at best and you’re probably better off with a car to explore. Wannabe models and movie stars with big attitudes way ahead of their would-be success abound – sure. But every city has its pros and cons so let’s look up to LA and talk about some fun and exciting things to do, see and explore – because hey, you’re going to come here anyways, right? 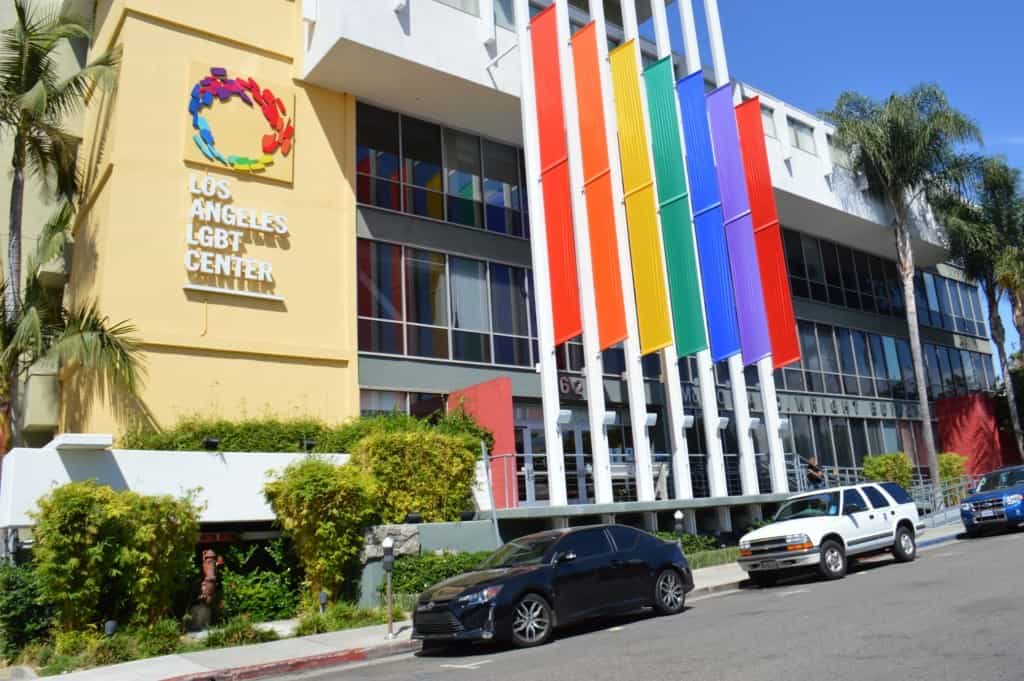 PS – This is not a comprehensive guide by any means but simply some inspiration and ideas to make your visit to LA cool, unforgettable and well…Gay.

West Hollywood – this is where it’s at – unless you’re really, really into the alternative seen. West Hollywood (called WeHo for short) has a whopping 25 gay bars, 26 gay shops and 69 gay friendly restaurants, and counting.

The Pick Up – Going out in WeHo? Ditch the car and don’t risk the DUI. The Pick Up is WeHo’s Free Nighttime Ride with bus service every 15 minutes. It does a 6 mile loop around the neighborhood so you can drink and party until your heart is content without worrying about transport. Service operates Friday and Saturday from 8pm to 3am. Also available during special events and holidays.

Silver Lake – this is where LA’s hipsters eat, live and hangout. It’s home to Sunset Junction, the start of the LA LGBT civil rights movement at the famous Black Cat Bar (though no longer a gay place). You’ll find lots of restaurants, coffee shops, boutiques and vintage stores here. Next to West Hollywood, it’s probably the 2nd most popular gay neighborhood in LA.

The W Los Angeles – let’s talk about fabulous hotels. There are so many options in LA to stay so it’s best to choose your neighborhood first. Located in Westwood just next to Beverly Hills is the W Los Angeles West Beverly Hills. Stylish, modern and gay-friendly, it could be the perfect option to splurge. 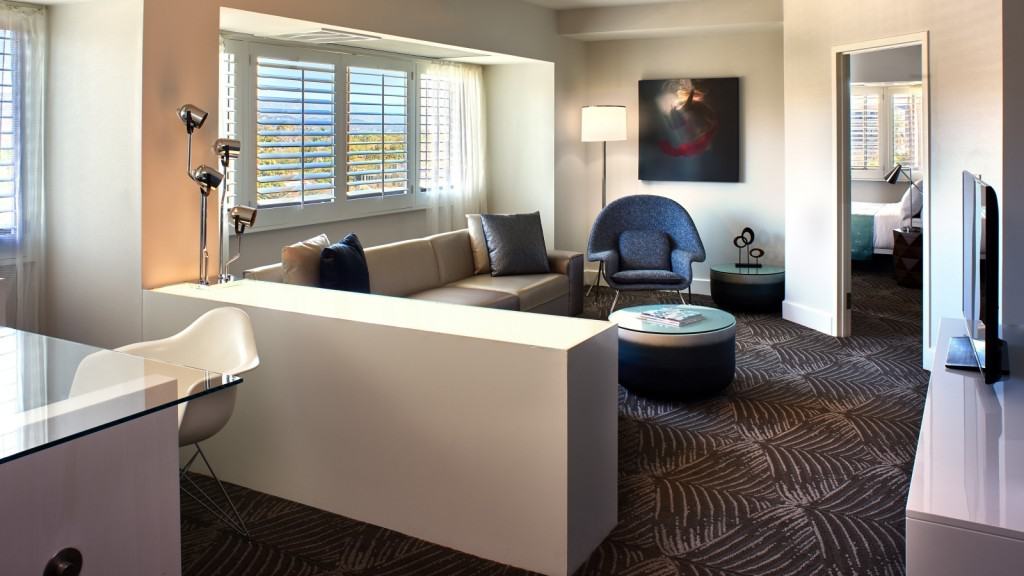 The Roosevelt Hotel – or perhaps you want to stay in Marilyn Monroe’s former studio apartment? Look no further! The Roosevelt Hotel in Hollywood is a classic with so much history plus an amazing outdoor pool. If nothing else, you have to at least pay a visit and have a drink at the bar. And guess what? The Roosevelt Hotel was the host of the first Academy Awards! Talk about history. Plus, they also host a twice monthly gay party at the onsite club called Rhonda.

The Abbey – a gay landmark in West Hollywood. It’s a large, welcoming space with indoor and outdoor seating, several bars and a good size dance floor in the back to shake it. You’ll find beautiful people and even more beautiful go-go dancers. This is where LA’s trendy gays come to play.

Flaming Saddles – guys, you won’t find any go-go dancers here. Yes, it’s located in WeHo but this is where you’ll find hunky cowboys line dancing or Coyote Ugly-style routines on top of the bar. Need we say more?

GYM Bar – another totally different type of WeHo bar, unlike the Abby and Flaming Saddles in every sense. This is where the sports fans can go to watch the game. Which game you say? Ya, we’re not sure either but hey, it might just be your thing. It’s also the hub for many of LA’s gay sports leagues.

Mustache Mondays – located in downtown LA, this is the favorite party spot on Monday for dancing located at a bar called La Cita.

Akbar – this is Silver Lake’s popular and trendy bar, but don’t worry – it’s not pretentious or snobby. The crowd is more alternative than WeHo and it’s where all the hipsters go out.

Big Gay Ice Cream – yes, it’s exactly like it sounds. This shop was made famous in Manhattan with both popular central locations and a mobile truck that moves across the city. Now The Big Gay Ice Cream shop has opened up a permanent location in the Ace Hotel’s Upstairs Bar in downtown LA. You can enjoy both the sprawling views of the city skyline and soft serve ice cream with signature toppings.

Marix Tex Mex Café – this restaurant located in West Hollywood is a gay LA institution. Come for the strong margaritas, good food and cute servers. If you’re around on Tuesday, stop by for all-you-can-eat Taco Tuesday for just $8.

Grand Central Market – this indoor market in downtown LA has over 40 merchants selling great produce, snacks, coffees and miscellaneous food items. Go for lunch and enjoy cuisine ranging from Mexican and Asian to Cuban and American. 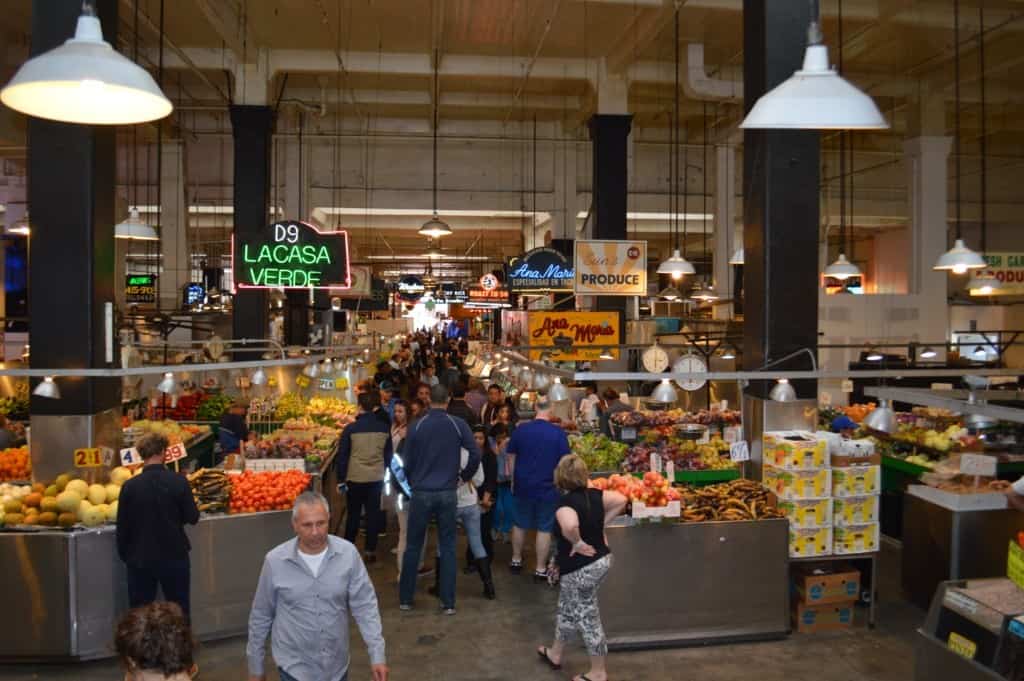 Pump Restaurant Lounge – recently opened by Real Housewife, Lisa Vanderpump, this restaurant serves up delicious food and drinks by even more delicious servers. Probably all aspiring actors and models, their day job is sadly (or maybe not so sad for you!) to fulfill your order at this fabulous restaurant and bar with an amazing outdoor garden.

Out & About Tours – Check out an awesome gay tour of Hollywood. You’ll explore the history of Hollywood a bit off the touristy trail with plenty of gay flare.

Gay-ish Bus Tour – Do you like bus tours? Ok sure, this is your typical hop-on, hop-off bus tour so no surprises there. But what’s kind of cool is that they offer a special self-guided LGBT itinerary which you can download here. Not a bad idea, right?

The Bradbury Building – ok, this building doesn’t look like much from the outside but the interior is a real treat. It’s been used as a backdrop for numerous Hollywood films over the decades. It’s free to enter and is worth strolling through during a walk around the historic LA area.

One National Gay & Lesbian Archives – the largest collection of LGBT history archives in the world. The archive itself (located at USC campus) is perhaps not the most exciting place to visit as it’s more of a resource for history buffs or researchers. But you can visit the satellite location in WeHo which is a small Gallery & Museum with rotating exhibits. 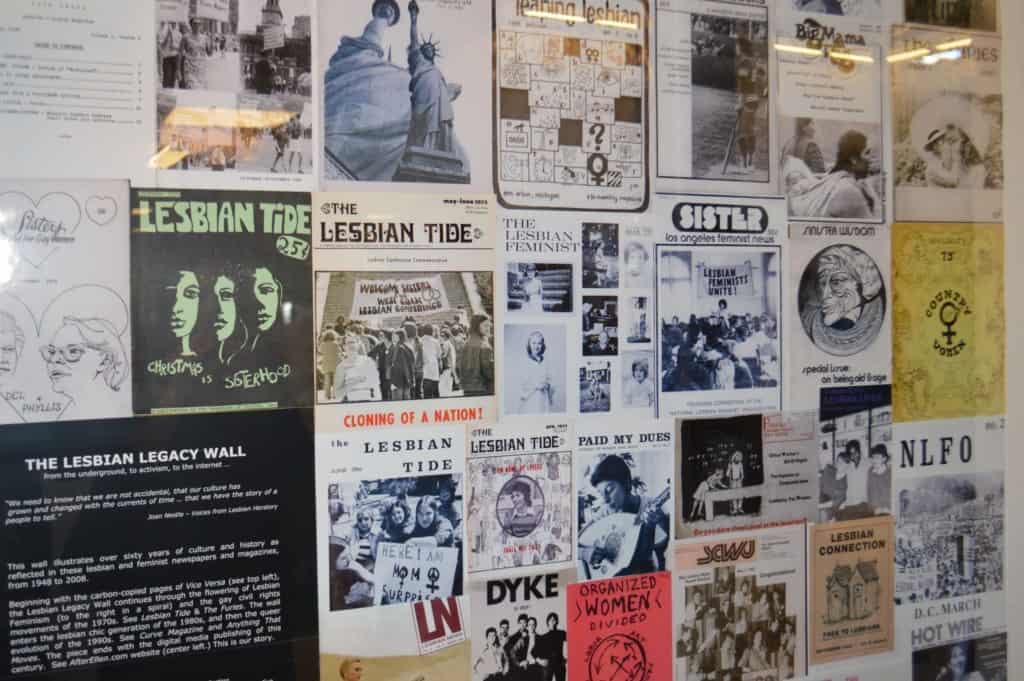 Out of the Closet – this thrift store located in West Hollywood plus several other LA locations offers designer clothes at ridiculously low prices. Even better – all proceeds go to the AIDS Healthcare Foundation Pharmacy so you can feel good about your purchase.

The Getty Center – this is a cool museum and cultural center in an even cooler setting. It’s located at the top of a hill west of Los Angeles and features various types of art exhibits and amazing views of LA from several different look out points. Some works on display include pre-20th century paintings, drawings, photographs plus a collection of sculptures displayed on the outdoor terraces and in the gardens.

The Advocate – ok this isn’t a physical landmark, but still deserving of this spot. Well known in the LGBT community, this publication was founded 48 years ago in Los Angeles and is still going strong. These days the Advocate is still in print but also online and on just about every major social media channel. You can catch a glimpse of the first issue of the advocate at the One National Gay & Lesbian Archives.

The Wall Las Memorias Project – this monument was setup in 1993 and it’s the first publicly funded AIDS monument in the country. It’s an outdoor cultural landmark that honors all AIDS victims and is found in Highland Park.

LA Pride – the gay pride of Los Angeles takes place each summer in June. With more than 500,000 attendees it’s a load of fun and a good reason to visit in June. 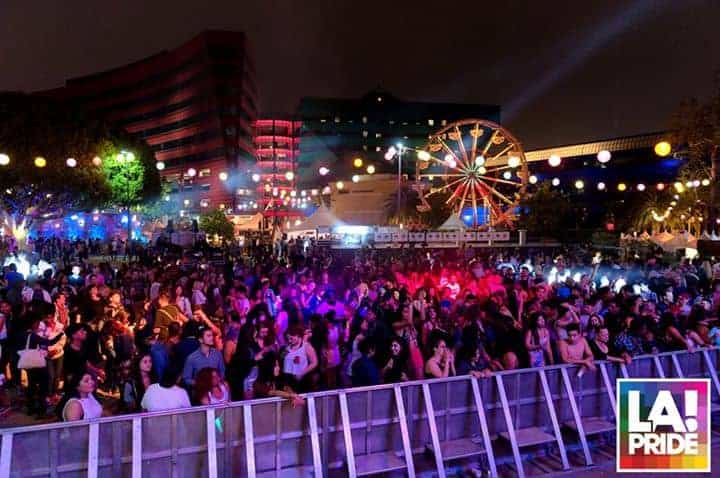 Halloween Street Party – the largest Halloween street festival in the world is officially called the West Hollywood Halloween Carnaval. This event also draws a crowd of 500,000 people to enjoy food, live entertainment, music and costume contents. Dress to impress – in a costume, that is.

Have you visited Los Angeles before? If not, what things in LA look the coolest to you?

Note: my visit in LA was sponsored by the Los Angeles Tourism and Convention Board. But as always, rest assured all opinions are 100% my own. Some of these links are affiliates which means using them won’t cost you any extra but we do receive a small commission for each referral. You’re not obligated to use them but we appreciate it if you do. Thanks in advance for supporting this site if you choose to use our link! Featured image via Flaming Saddles.