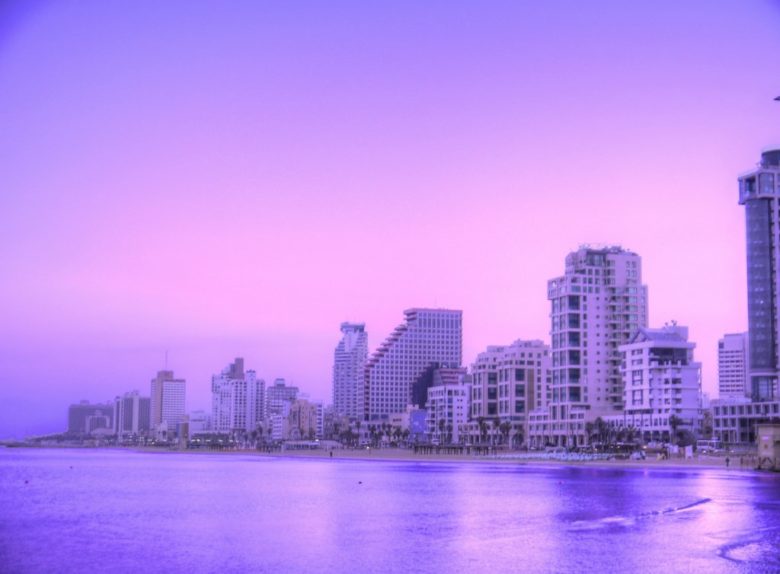 It’s a term we’ve been forced to acquaint ourselves with over the past couple years. Possibly not something well known to the average LGBT traveler, but it’s an important thing to be aware of especially if you plan to travel to Israel. And like many topics related to Israel, there’s a lot of debate and it actually has much bigger implications beyond the LGBT community.

Ok so what is pink washing exactly? More on that in a minute…

First, I decided that I want to address this topic since I recently visited Israel and leading up to, during and after my visit, I received a lot of messages of criticism (and hate) on social media as I shared status updates and photos of the trip. I’ve come to realize that simply visiting Israel can be interpreted as a statement of many things…regardless of my true feelings. I also understand that separating the idea of traveling to Israel and the current political situation is something that cannot be avoided no matter how hard I try. So in some sense I feel like it’s my responsibility as a writer, a traveler and a gay man to address this issue, share what I’ve learned and try to explain my viewpoint. 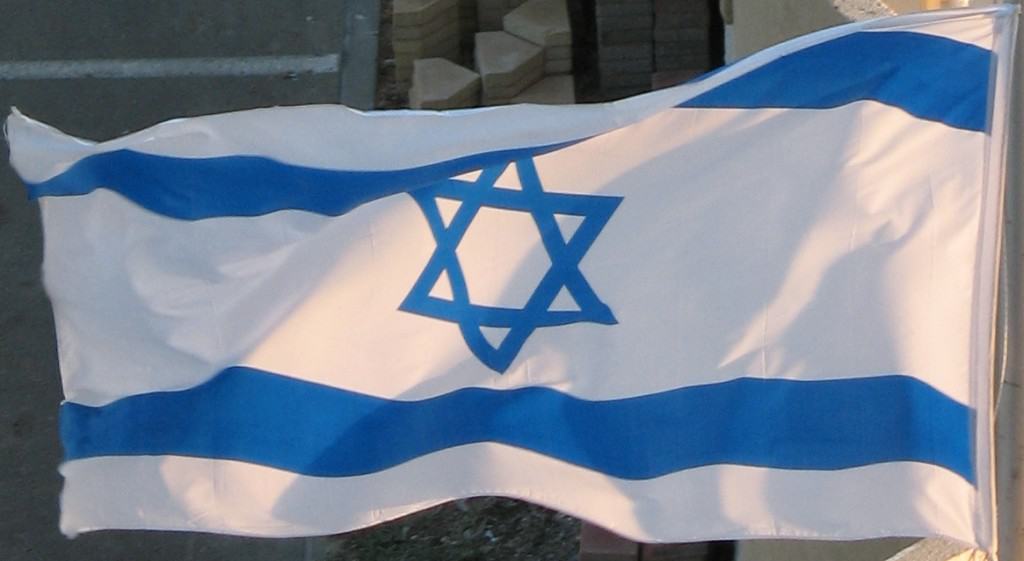 I believe that with every small trip we make…we learn a little bit more about one culture and hopefully leave something positive behind.

The most basic definition I’ve come to understand is that it is the deliberate attempt of the Israeli government to use the advancing LGBT rights in Israel as tactic in the media to distract attention away from the human rights violations against Palestinians and Arab Israelis. So in more simple worlds, people accuse the Israeli government of using something positive (increasing LGBT rights) to hide the negative (poor treatment of Palestinians and Israeli Arabs). If you search the term “Israel Pinkwashing” on Google you’ll find strong opinions on both sides of this hotly debated topic. And actually this issue is further complicated and is one that goes deeper than the LGBT community or simply the topic of gay travel in Israel.

Our First Encounter with Pinkwashing

We’ve had the opportunity to travel around the world over the past few years to far off lands, popular gay destinations and even those countries where we would be put in jail if we simply held hands or kissed in public. Even stranger was the fact that we first learned about pinkwashing while in Ghana…of all places.

We met Tyler (from the UK) and Mirah (from Israel) during our volunteering stay. Both were recent law graduates and they came to Ghana to volunteer with the same organization but in a different capacity. We quickly became friends and decided to take a weekend trip together to the beach.  Fast forward to our night of drinking way too many beers at a beachside bar and the conversation become heavy.  Mirah explained that she was actually a Palestinian living in Nazareth – an Israeli city with a large Arab community. She later admitted that she was bisexual and as can be expected, she had quite a strong opinion of Israel and she didn’t hesitate to share her thoughts of Israel’s use of pinkwashing as a political tactic. But honestly, at the time I just didn’t fully understand the issue but I knew it wouldn’t be the last time the topic would come up during our travels.

Let’s start with one fact: Israel does have a progressive approach to LGBT rights and it affords its residents and visitors with many rights and protections not seen in other parts of the world, especially in the Middle East. Like any country, there are opponents to gay rights in Israel especially coming from highly religious groups. Still Israel manages to maintain a mostly secular approach to LGBT rights. But in neighboring Arab countries like Saudi Arabia, Syria or Egypt – being gay is illegal with punishments ranging from jail to the death penalty.

So naturally, as an LGBT traveler – it would seem that Israel would be a desirable destination. In fact, Tel Aviv itself has been rated as one of the top gay destinations worldwide in recent years. And frankly, I think it’s true. Tel Aviv is an extremely open and liberal city – a place whether local and foreign gays are welcome to be out, open and enjoy a thriving gay scene.

Do I have an unbiased viewpoint? Probably not. After all, I’ve only visited Israel and I haven’t had to the chance to visit Palestine or really get to know any Palestinian people besides Mirah.

So yes, Israel is a gay friendly destination but that is actually not the debate or the main issue behind the concept of pinkwashing. Rather, the issue at hand is actually more political and isn’t really about gay rights in Israel or gay travel in general. Instead, it’s really a political discussion focused around Israel’s occupation of Palestine and its treatment of the Arab minority.

Surely I’ll be faced with criticism on my viewpoint but at least I can say I’m now educated when so many of those gay travelers to Israel are not. I’m actually not going address the topic of the Israeli-Palestinian conflict directly because the scope of that discussion goes beyond this article and there are many more qualified people who have written about this in the past and will continue to do so in the future. My intent is to limit the conversation to just pinkwashing and my personal connection to the issue as a gay traveler.

My opinion is that regardless of the political situation (i.e. the occupation of Palestine) in Israel or whether or not the pinkwashing claims made against Israel are true (perhaps they are), I still support visiting Israel especially as a gay person. I know some don’t agree with me and that simply visiting Israel is a statement of support given that my money as a tourist is going into the local Israeli economy and then indirectly to the government.

The truth is I’m actually not a political person – my passion and expertise is in travel and it’s where I choose to focus. Of course, I can’t ignore accusations and the facts. Israel continues to occupy Palestine and I traveled there just 2 months after the recent war with Gaza during the summer of 2014. Tensions were still high and it’s a fact that a lot of innocent people were victims of conflict, mostly Palestinian people. 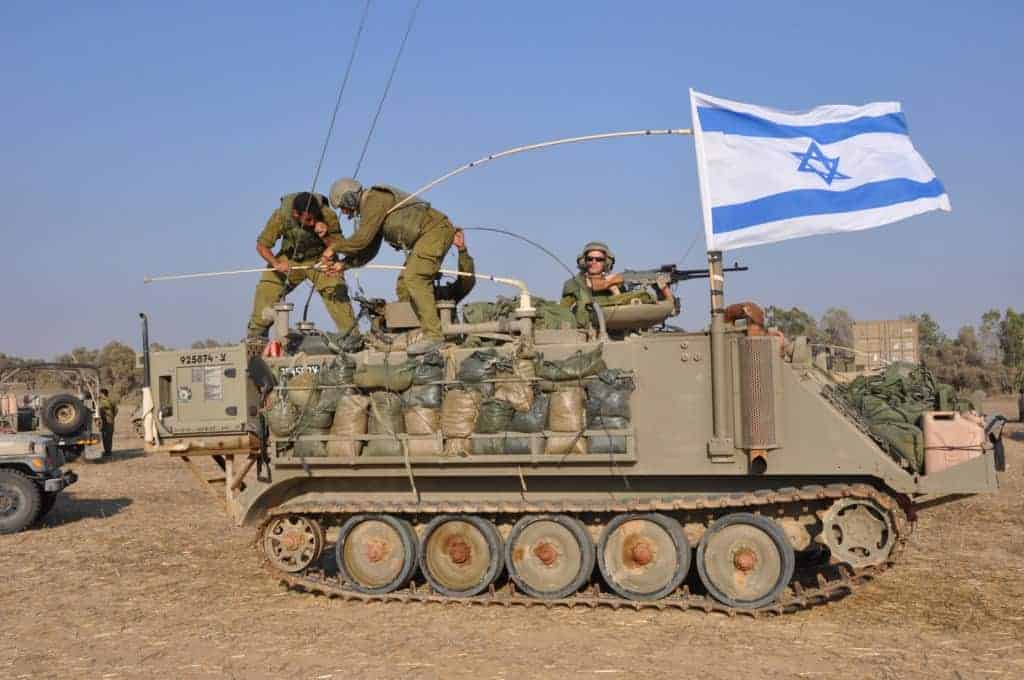 But even so, I still don’t believe the solution to addressing pinkwashing is a boycott. Some groups suggest that people boycott travel to Israel (especially gay activists) as way to make a public statement of disapproval. I recognize that boycotts might be effective tools in some cases but I don’t think this is the best solution here. I’m a strong believer that travel is a tool that opens people to new things, so stopping this cultural exchange doesn’t make sense to me. But while I don’t think a boycott is the answer, I unfortunately don’t really bring another solution to the table and I recognize the hypocrisy in this.

Should You Travel to Israel?

I’ve given my viewpoint, which is yes. I also encourage visiting Palestine if you get the opportunity as well to try and familiarize yourself with both destinations as they each offer a different cultural experience and different sites of interest. But of course, this decision is totally up to you.

I often try to remind myself that those of us that are able to travel financially are a very few select group of privileged people in the world. We are lucky to have been born into middle class families in a developed country that allows us this opportunity. But I think this privilege comes with a responsibility to represent ourselves to the best of our abilities and recognize our situation. I believe that with every small trip we make, especially internationally, we learn a little bit more about one culture and hopefully leave something positive behind. 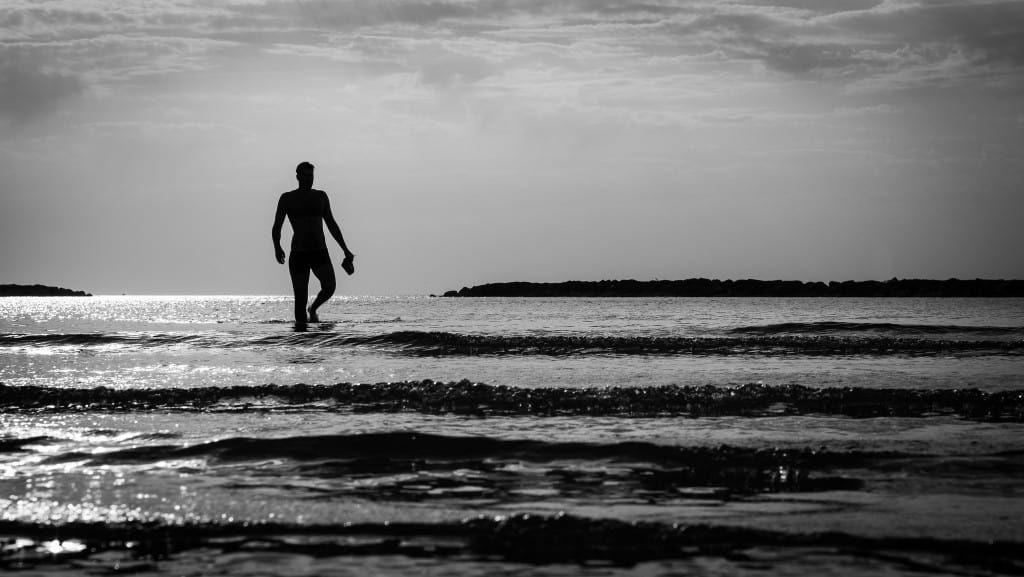 Travel is a gateway to learning about people…

I think that travel is a tool for education, understanding and cultural exchange. Israel is unique in the Middle East with LGBT rights and protections. But David and I both actually support traveling to countries that don’t have protection for LGBT people. Yes, we would travel Russia, Uganda or even Saudi Arabia regardless of the risks. We’ve already spent months traveling in countries of this type and it doesn’t scare us to go nor do we like the idea of boycotting a visit to these places simply because their government doesn’t provide LGBT protections. I also don’t think that a country’s government necessarily represents its people in every way…and many times not at all. I hope that people don’t automatically make assumptions about me just because I’m American – but I know it happens.

I know this is a controversial issue and everyone is entitled to his or her opinion. But my take is that the more who people travel (especially LGBT people) the more these different places and cultures will become familiar with us and they will better understand the rights we are fighting for. Of course, you have to be smart traveler and address the reality of the situation. After all, we aren’t going to hold hands strolling in front of the Kremlin nor did we exchange a kiss or even wear our wedding rings during our month long trip to Ghana. 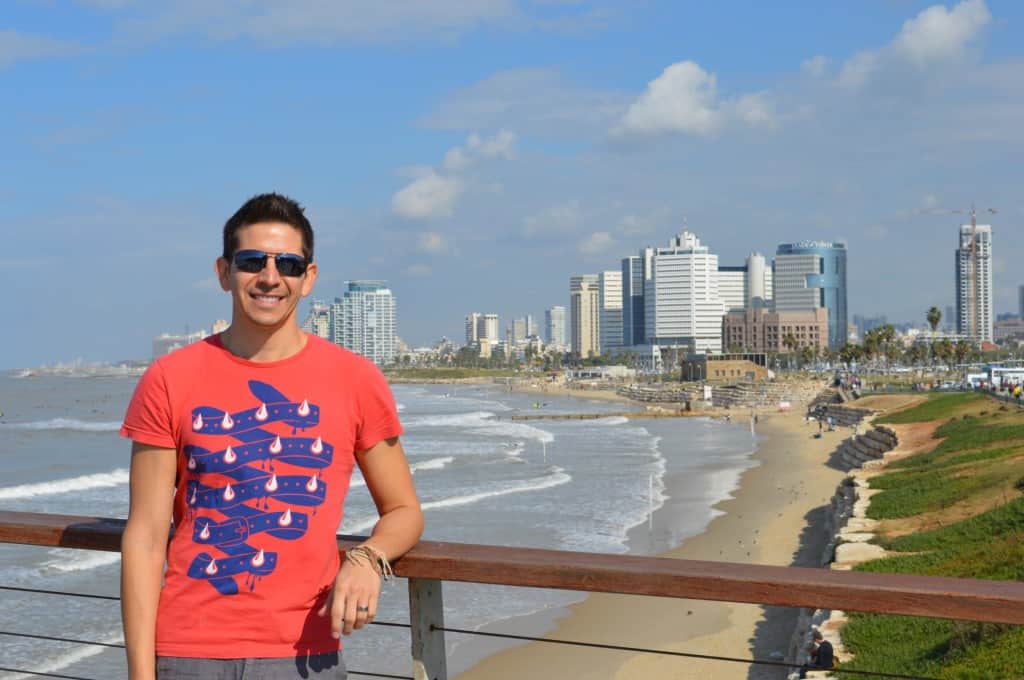 View of Tel Aviv skyline from the old town of Jaffa

My guess is that there is truth on both sides of the pinkwashing debate. But I stand by the fact that travel is a gateway to learning about people. After all, if we didn’t go to Ghana, we wouldn’t have met Mirah who so passionately educated us about this issue. If we didn’t visit Spain we would never have moved to Madrid – one of the most gay friendly cities in the world that we now call home. And finally, if I didn’t travel to Israel I wouldn’t have learned as much about this issue nor formed a more educated opinion.

I know people will disagree. But even in the face of disagreement I think it’s beneficial to discuss. I’m opening myself to criticism which I fully expect. But I think talking is important. Education is important. Respecting another’s culture, while not necessarily agreeing with or supporting it is important. And I believe travel is one of the keys to better understanding our differences.

What’s your opinion on the topic? Would you still visit Israel as an LGBT traveler? Why or why not?

Note: I feel it’s important to point out that my visit to Israel was sponsored, not by the Israeli ministry of tourism but rather by a private tour company that provides travel packages in Israel for LGBT people. But as always, rest assured all opinions are 100% my own and I try my best to not let a sponsored trip or a biased viewpoint influence my opinion. I’ve also changed the names of the people in this article in an effort to maintain their privacy. Featured image credit: Photo via Joiseyshowaa / CCBY

20 Comments on “Pinkwashing – What’s the Truth about Israeli Gay Rights and Travel?”