When we first arrived in Reykjavik, it felt oddly familiar yet wholly distinct. Though Iceland is a European country, something about its capital city just doesn’t feel European. Perhaps it’s the way the sun hangs oddly in the sky not quite right with the time of day. Or the iconic use of colorful corrugated iron in the buildings and houses. Or how it feels more like a small winter ski town in the mountains than a capital metropolis where almost two-thirds of the country’s 325,000 inhabitants live. Whatever it may be, Reykjavik has a remarkable charm born from its European ties just as well from its island isolation, but still a charm all its own. 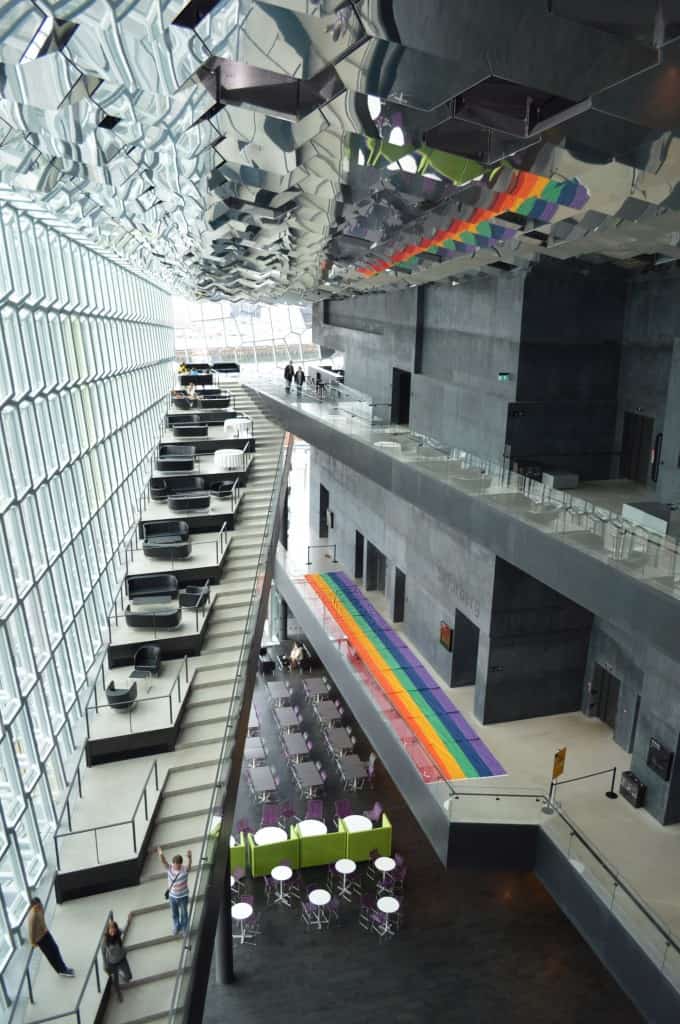 Reykjavik Pride is a well structured week of fantastic events. The turnout for the festivities depends on the particular event and ranges from modest to impressive. The Diving Divas event that combined cute divers at the community pool with Icelandic musical performances was one of the smaller events though quite unlike any other Pride event we’ve ever attended. The Opening Ceremony at the famous Harpa Concert Hall is one of the biggest nights during Reykjavik Pride and consists of opening speeches, music, drag queens and general queer entertainment. It has somewhat of a gala feel with well dressed attendees, but still maintains a strong gay flair where anything goes – since in the gay world, looking good is looking good, whether it’s suits and ties or shorts and tanks. 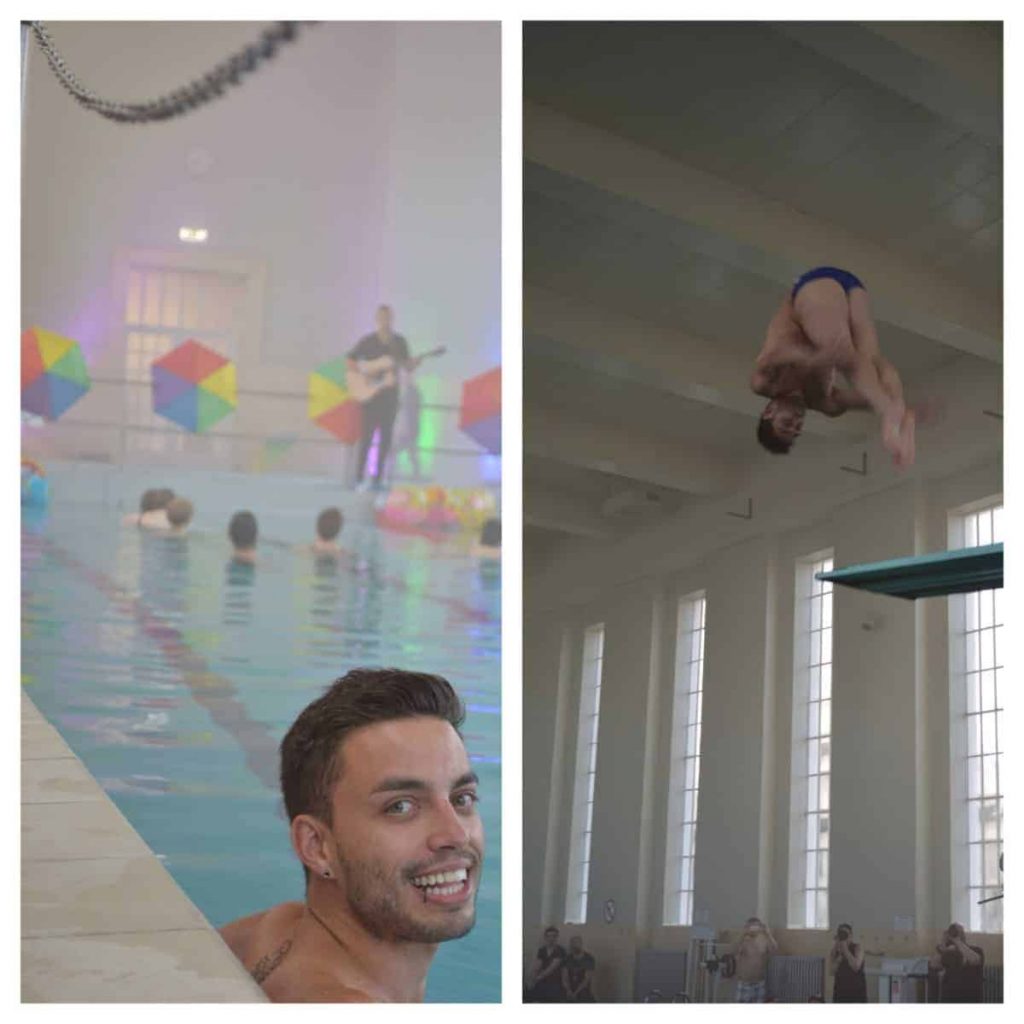 Aside from the evening events, there are also activites held during the day consisting of lectures and documentaries dealing with queer topics like intersex and trans issues today. Though Reykjavik Pride does not have any sort of dedicated outdoor festival or pride park, it has a great line up of activities throughout the week. They also do a really good job of making it a bilingual Icelandic-English event to cater to locals and visitors alike.

The Pride Parade has an incredible turn out for the country with about 100,000 spectators coming to watch it take over the streets. Their parade consisted of just a few floats with Icelandic pop singer Páll Óskar putting on quite the show as the final float. There are also many groups marching representing various organizations involving sports, politics, queer families, human rights, and all the usual queer-related sorts. 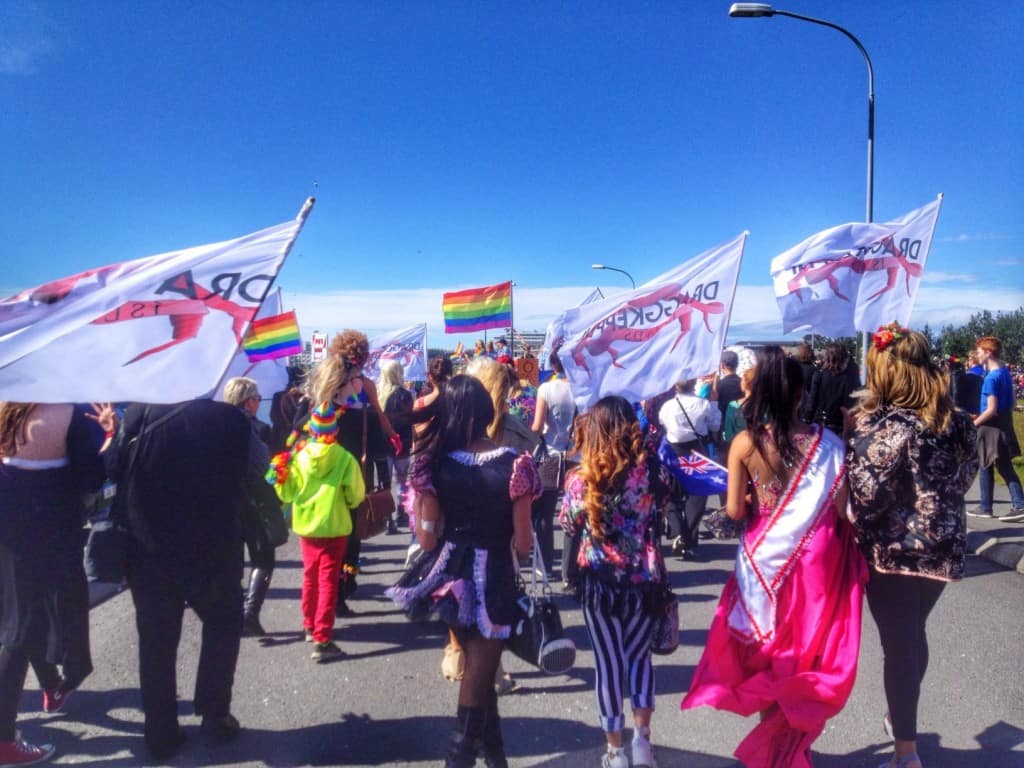 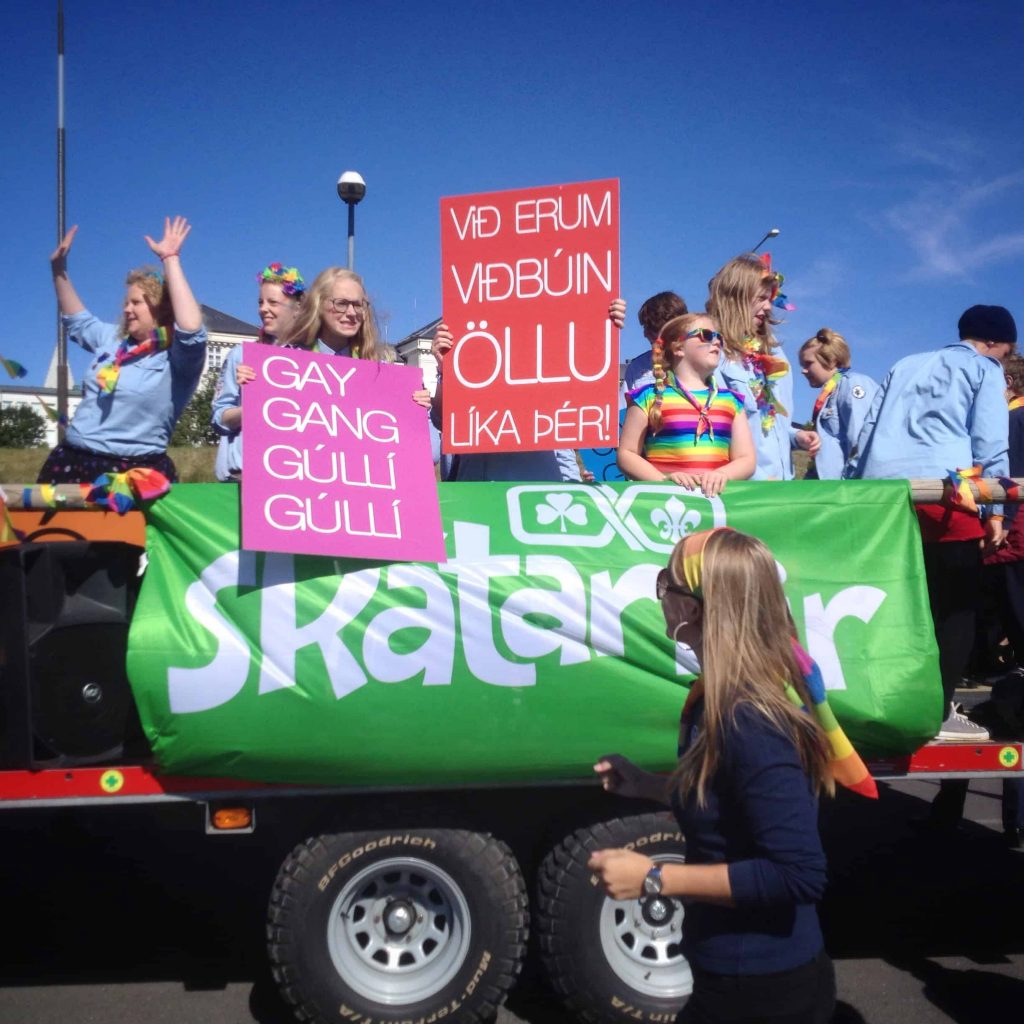 The US embassy, Canadian ambassador and mayor of Reykjavik were also involved in the parade, and the mayor is even known for attending in drag. Immediately following the parade there is an outdoor concert at Arnarhóll Hill in Lækjargata, which is where the parade ends.

Though the city comes alive with pride during this annual event with rainbow flags in nearly every store and restaurant window, you don’t necessarily see the streets filled with gays. It’s really a community wide, family-friendly event that the whole city partakes in. Of the queer community, there’s a great mix of lesbians and gay men alike without the usual division among them that is typically found within queer communities of larger cities. In Reykjavik, they stick together which is a nice reminder that though the LGBTQ community at large may have many different factions, we are one and work as one towards equality.

Some events are free while others require payment for admission. For access to all the main events, the Pride Pass goes for 6,900 ISK (US$59) while individual events can range from 1,000 ISK (US$9) to 3,500 ISK (US$30). Iceland is generally not the cheapest place to visit so the same can be expected from Reykjavik Pride. 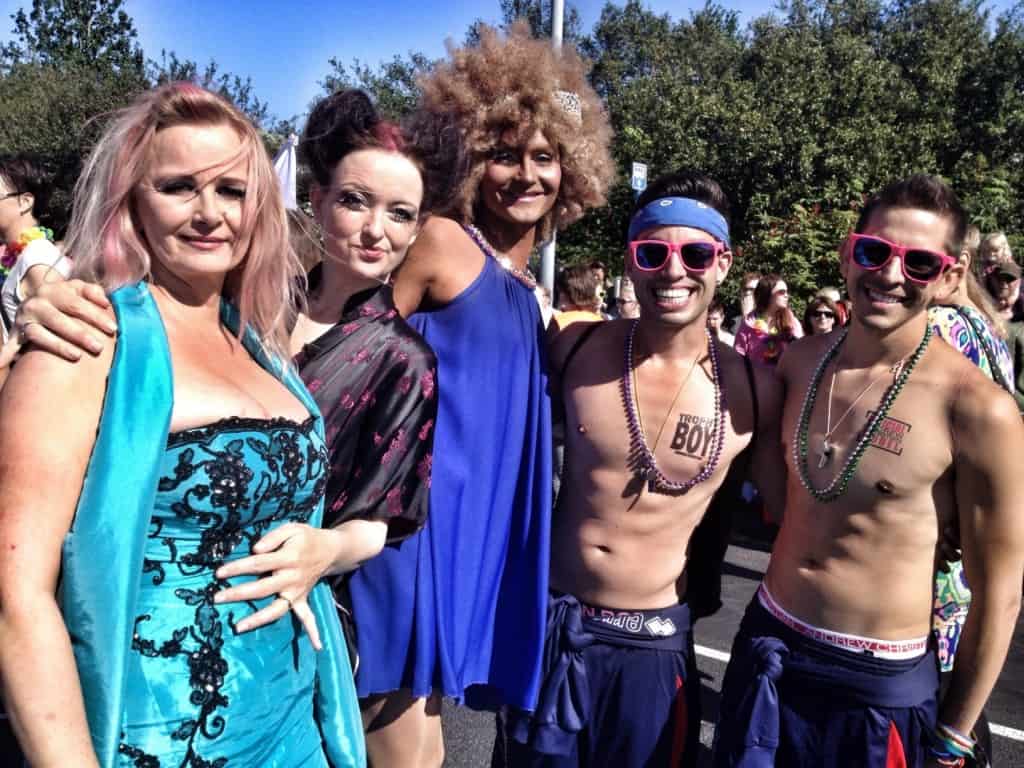 Reykjavik accurately promotes itself as one of the biggest small gay prides in the world and proportionately to its population, it really is quite large. The overall feel of Reykjavik Pride is not like the party heavy scene of Madrid nor does it have the over-the-top Pride Park of Stockholm Pride, but Reykjavik Pride is very friendly and very relaxed. It has more of a laid-back festival, community celebration vibe.

The gay scene in Reykjavik is very small yet quite prominent at the same time. There’s no gay Reykjavik neighborhood and there’s really only two gay bars in the center. There’s a bar called Bravó for grabbing a drink in the evening and next to it is a club called Kiki, a great spot to dance, listen to good music, and mingle. Though the scene is small, Reykjavik is a very gay-friendly city to visit.

This year marked Reykjavik’s 16th annual Pride. Starting from just 1,500 spectators when Reykjavik Pride began in 1999, it has really taken off and captivated both Icelanders and foreigners gathering up to 100,000 participants each year. Iceland’s small yet dedicated LGBTQ community along with Samtökin ´78, the Gay Iceland principal queer organization, has worked hard to make it one of the world’s most queer-friendly countries. 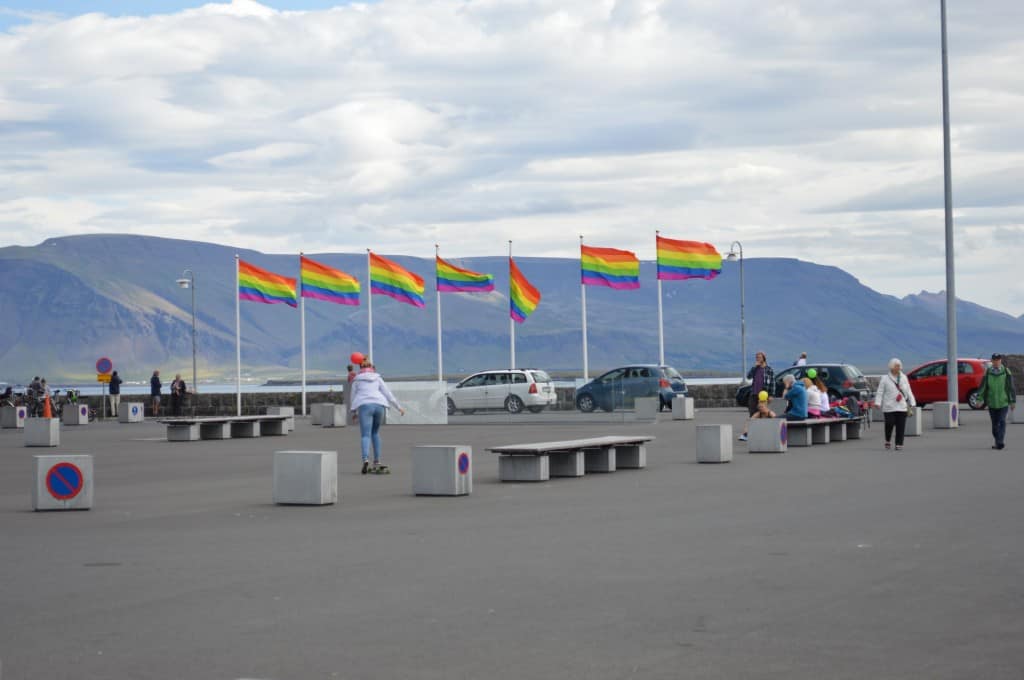 The Reykjavik Pride Ball is one of the week’s final events and provides a great night of DJs, live performances, and dancing in a great venue outside the center. However, don’t be confused by it being referred to as a“Ball”. It’s not a formal ball like we thought and showed up overdressed. It’s just a one night gay club venue – and a great one at that!

A great way to take advantage of Pride Week in Reykjavik is to hook yourself up with one of Pink Iceland’s tour packages offered during Pride. Pink Iceland, a tour company catering to the LGBTQ community, works well with all the Pride festivities allowing you to get the most out of Pride in the city center while also making time to visit must-see destinations outside the city like the Blue Lagoon or the Golden Circle. It’s a great way to add more gay and more Iceland to your gay Icelandic Pride week! 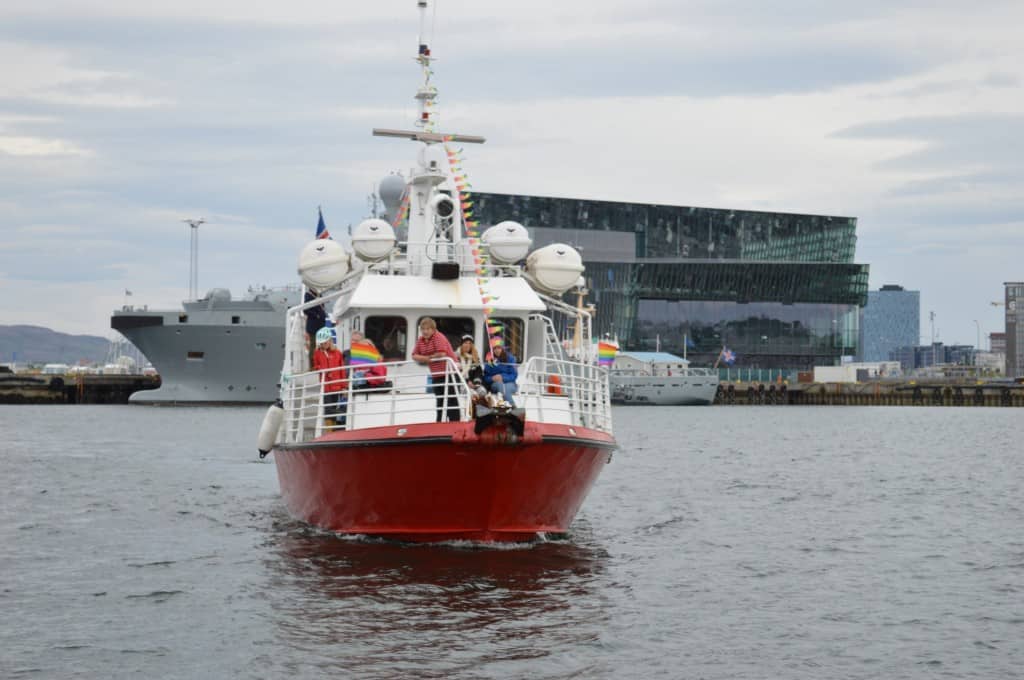 Pink Iceland is a gay-owned and operated travel service founded Eva María & Birna back in 2011. Now with their friend and business partner Hannes, the three run the gay Iceland company together with love specializing in gay day tours, weddings, international and domestic events and festivals and custom-built packages. They have decades of experience in the tourism industry and are some of the best in the business, which you can see from their phenomenal 5-star reviews on TripAdvisor, ranked among the top 6 activities in all of Reykjavik.

Interested in taking a tour with Pink Iceland? They’re a great team and offer a variety of tours from Reykjavik and around the island. You can even save 5% on their tours by mentioning Two Bad Tourists when booking. Click here for more info!

Have you ever visited Reykjavik or attended a Gay Pride event? What did you think? Let us know in the comments!

Note: Reykjavik Pride and Pink Iceland sponsored several of our activities during our visit to Reykjavik Gay Pride 2014, but rest assured all opinions are our own. In fact, we highly recommend Pink Iceland – they are some of the friendliest and most welcoming hosts you can imagine.