I’m not usually a picky eater, but there have been a few Spanish food items that I’ve specifically avoided now having lived a year in Madrid. I enjoy most Spanish foods but I’ll be honest in saying that olives or anchovies aren’t exactly my first choice when I sit down for a meal. But I recently went on the Madrid Food Tour with a friend and was surprised by my reaction to some of these varieties and other foods I tasted on the tour.

I’ve tried Spanish olives plenty of times over the past couple years and I’ve never been fond of them. Along with potato chips, they are probably the most typical free tapas that are served at a bar or restaurant when you order a drink. The most common variety is the green olive and David can eat an entire bowl in one sitting. But even with my distaste for this green Spanish staple, I was happy to discover the more mild, brown variety called campo reales. We tried these at a restaurant called Taberna Real near the Opera metro, which also serves up a number of classic Spanish foods like jamon, almonds or tortilla. So if you’re not normally a fan of olives like me, there’s a good chance this type might be to your liking.

Convinced a food tour in Madrid would make the perfect part of your visit? Check out the offerings at Devour Madrid Food Tours, where the only challenge is deciding which delicious tour to take. If you’re visiting other cities in Spain, but sure to check out all of the food tours offered by Devour Food Tours (Madrid, Barcelona, Seville, Malaga, Granada, Galicia or San Sebastian). 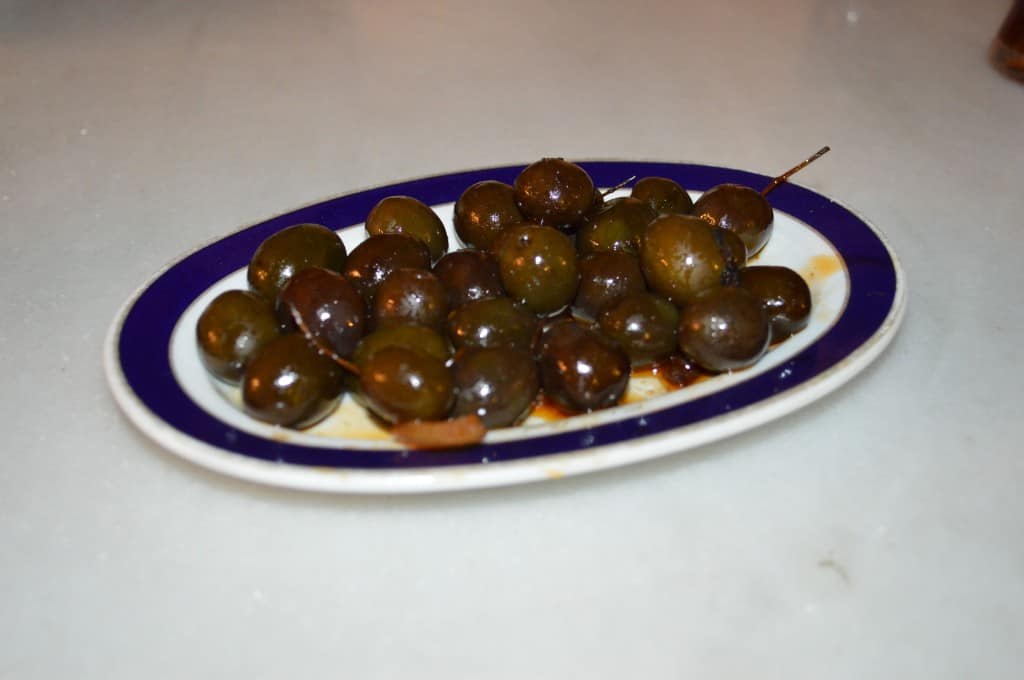 Another food I avoid that David happily devours is blue cheese. I don’t like the smell, the taste or the texture. I can eat it if I’m forced to and I won’t necessarily vomit or give anyone a hard time about it, but let’s just say it’s not my favorite. And truthfully, this still wasn’t one of my favorite foods I had on the tour but I was really surprised by the quality and the fact that I didn’t entirely mind eating it when I would normally say no. The north of Spain is particularly famous for producing a type of blue cheese called Queso de Cabrales, which is the variety we had. This cheese can only be labeled with this name if the milk comes solely from a small production area in the Asturias region of northern Spain. So if you’re a blue cheese lover you should definitely go out of your way to find it. We sampled the cheese spread on piece of bread at Bodegas Ricla, a family owned business that has continued for generations.

One of the highlights of the food tour and biggest surprises were the anchovies we also ate at Bodegas Ricla. These anchovies, called boquerones in Spanish, are traditionally prepared by marinating fillets in vinegar, later adding in olive oil, garlic and parsley. I’ve tried these before in Madrid and have not been impressed because the fish never seems to be fresh. Boquerones are an extremely common dish in Spain but it’s sometimes difficult to find them served fresh with such high quality like they do at Bodegas Ricla. 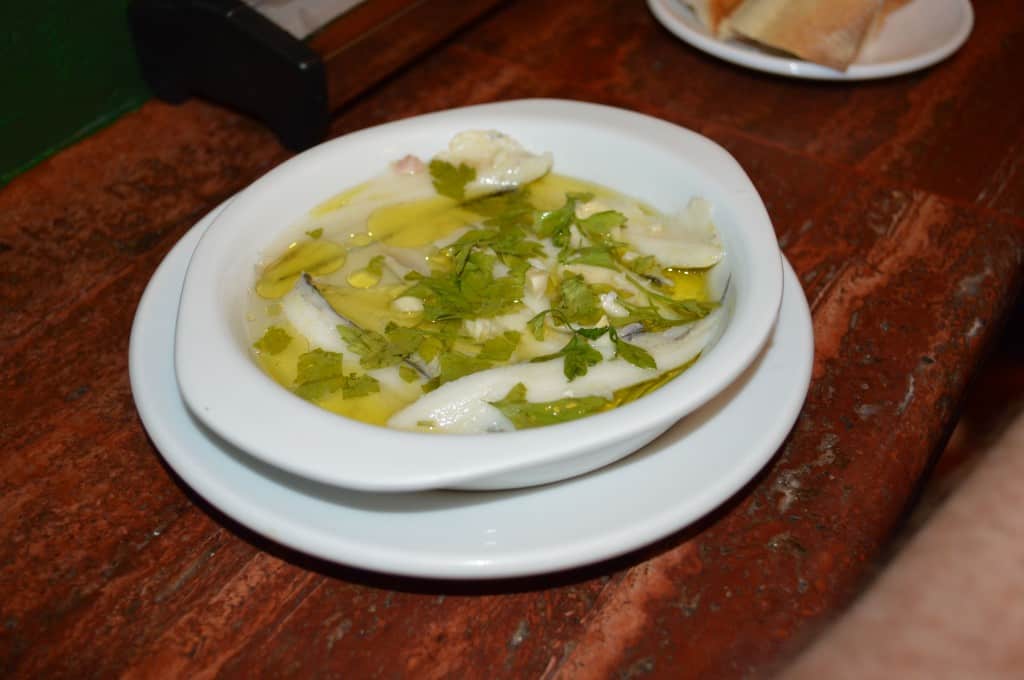 Spain is internationally famous for their wine and both vermouth and sherry are extremely popular wine varieties commonly enjoyed by Spaniards. In this case, I wasn’t ever specifically avoiding these beverages but I never really thought they would be something I’d go for. To be honest, both drinks have a bad reputation in the US and they really aren’t popular. I know vermouth because it’s occasionally used as an ingredient added to martinis. Sherry, on the other hand, is something my grandmother might drink with dinner. But these drinks are completely different in Spain compared to the US and perhaps other parts of the world. Vermouth (called vermut in Spanish) is simply white wine that has been enhanced with caramel. It’s common in Madrid to find vermut served on tap at lots of different bars including Taberna Real. Our local group of Spanish friends often go out during the week to a vermouth bar just to enjoy the drink and socialize. 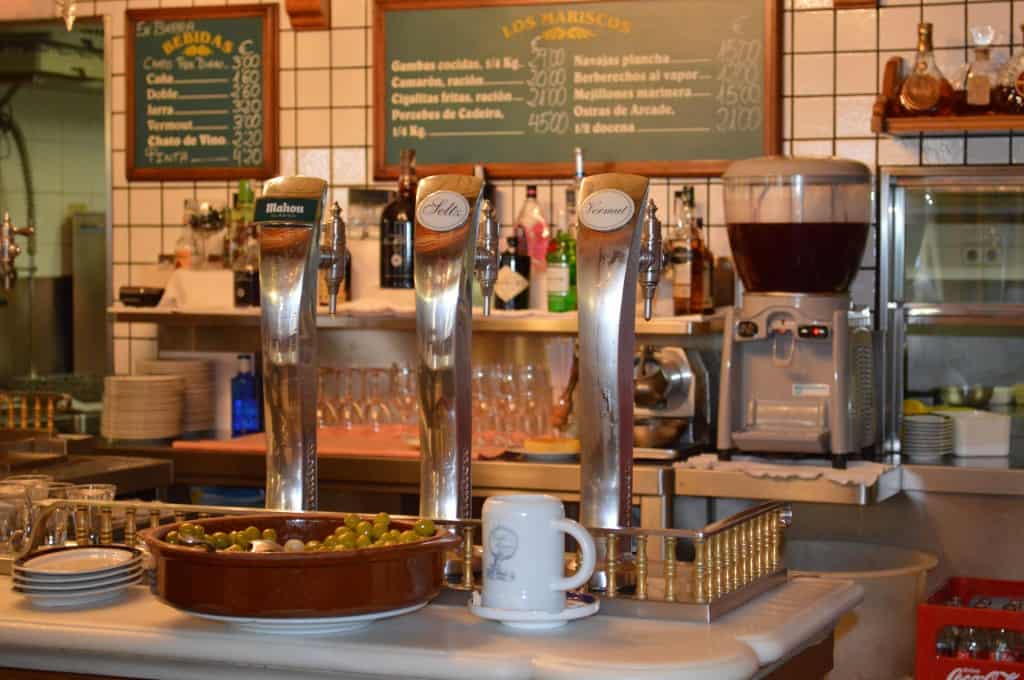 Sherry actually originates from Spain and is called vino de Jerez, taking the name from the region of Jerez near Cadiz in southern Spain. The best place for sherry in Madrid is a place called La Venecia, which dates back from the days of the Spanish Civil War. This bar became known as an underground socialist bar, since this political party was against Franco’s Nationalist group who won the war and was in power until the late 1970’s. The furniture and décor has not changed since and many of the same rules apply today. One rule, for example, is that you can’t take photos inside the bar since this would have been considered the act of espionage during those times. Earnest Hemmingway even made his way to this bar during his time in Spain. And if the history and current state of the bar isn’t odd enough, the only beverages you can even order here are sherry and water. No beer. No other wine varietyes. No soft drinks. Just vino de Jerez.

If you plan on visiting Madrid, you should definitely check out some of these restaurants to enjoy these classic Spanish food and drinks. In addition to olives, anchoves and blue cheese, we enjoyed some of my favorites including jamon iberico (high quality Spanish ham), albondigas (Spanish meatballs) and queso manchego (cured Spanish cheese). If you want the most authentic experience, I would highly recommend taking one of the Madrid Food Tours. The tours aren’t necessarily priced for the average budget backpacker, but if you’re willing to spend a bit for some great food, drinks and an awesome guide, do check out one of their tours in the city. You won’t be disappointed and you will certainly not be hungry afterwards.

Convinced a food tour in Madrid would make the perfect part of your visit? Check out the offerings at Devour Madrid Food Tours, where the only challenge is deciding which delicious tour to take. If you’re visiting other cities in Spain, but sure to check out all of the food tours offered by Devour Food Tours (Madrid, Barcelona, Seville, Malaga, Granada, Galicia or San Sebastian).

What’s your favorite type of Spanish food? Would you try any of these suggestions?

Note: Madrid Food Tours did sponsor our tour but rest assured all opinions are mine and I still highly recommend them. They’ve done a great job putting together the tours and employ fantastic, well-educated guides.

Leave a Reply to Sara @ The Let's Go Ladies