Finally I’ve seen a more tranquil side to Spain’s celebrations this past weekend. One that didn’t involve throwing tomatoes, battling with wine, or dumping water from balconies. I was starting to suspect that the Spanish didn’t know how to have a calm festival, but I was proven wrong with Semana Cervantina. Though nothing was being hurled into the crowds, the streets were still packed with that Spanish energy I love so much. This celebration is in honor of Miguel de Cervantes, the Spanish writer most infamously known for the novel Don Quixote. The festivities are held in Alcalá de Henares, a city about 30 kilometers outside central Madrid where Cervantes was born in 1547. Semana Cervantina takes place every year around October 9th, the day Cervantes was baptized in Alcalá de Henares. 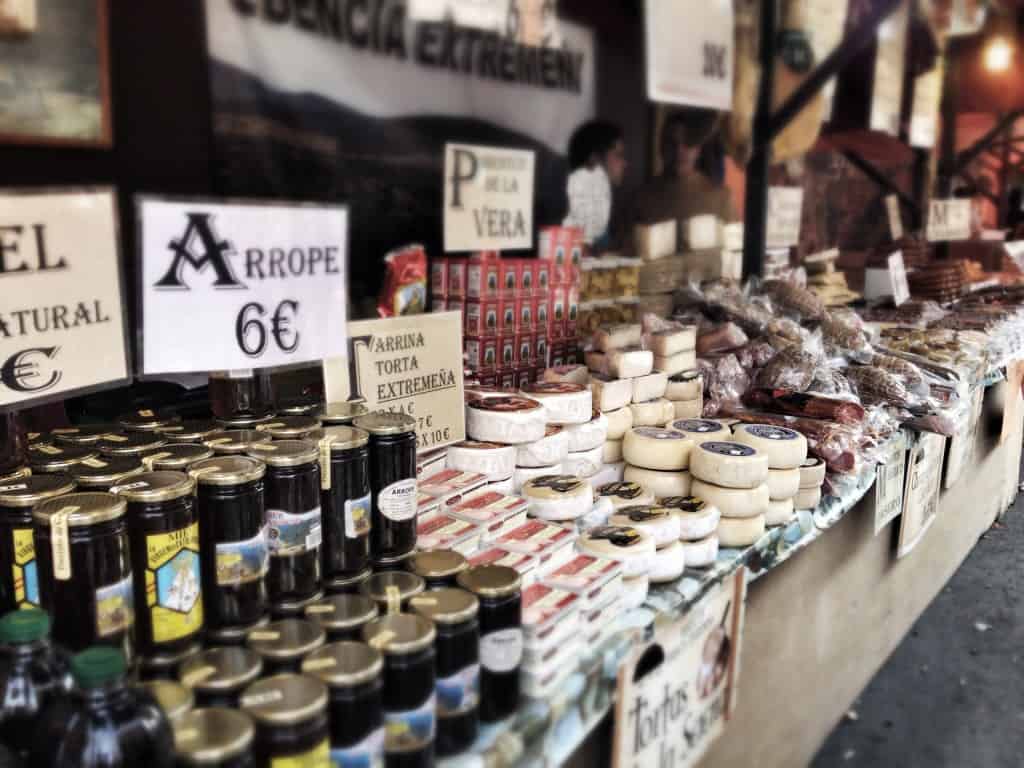 As I work just 10 kilometers away teaching English in Daganzo de Arriba, I heard that Alcalá de Henares was a city worth seeing. In fact, the city’s historical center is a UNESCO World Heritage Site. However, I was a bit skeptical as my train was pulling up to the station in Alcalá. I took the Cercanías, the commuter train, from central Madrid and just as I was arriving I was greeted by seemingly abandoned buildings next to the tracks coated in graffiti. I hoped this wasn’t representative of the rest of the city and once I exited the station and made my way toward the center, my fears were proven to be false. This city was discernibly worthy of its UNESCO status. 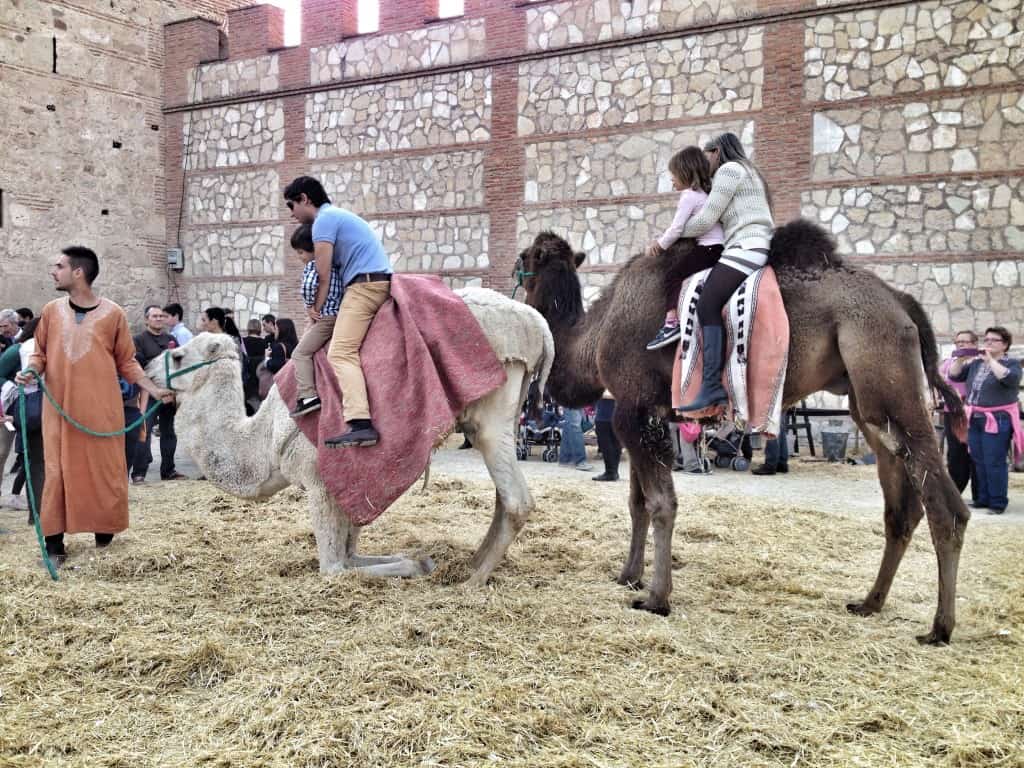 During Semana Cervantina the already natural medieval look of the city center takes you even further back in time with an incredible medieval market comprising of over 500 stalls selling crafts, sweets, spices, teas, edibles, toys, and more. They line the streets and fill Plaza de Cervantes and Plaza de San Diego. There’s also various exhibitions to see, musical and theatrical performances, literary events, children’s activities, poetry readings, and plenty to eat and drink. This is a free event to attend with most entertainment being without cost as well. Just the knickknacks, food, and beverages come at a price, but still not a large one. 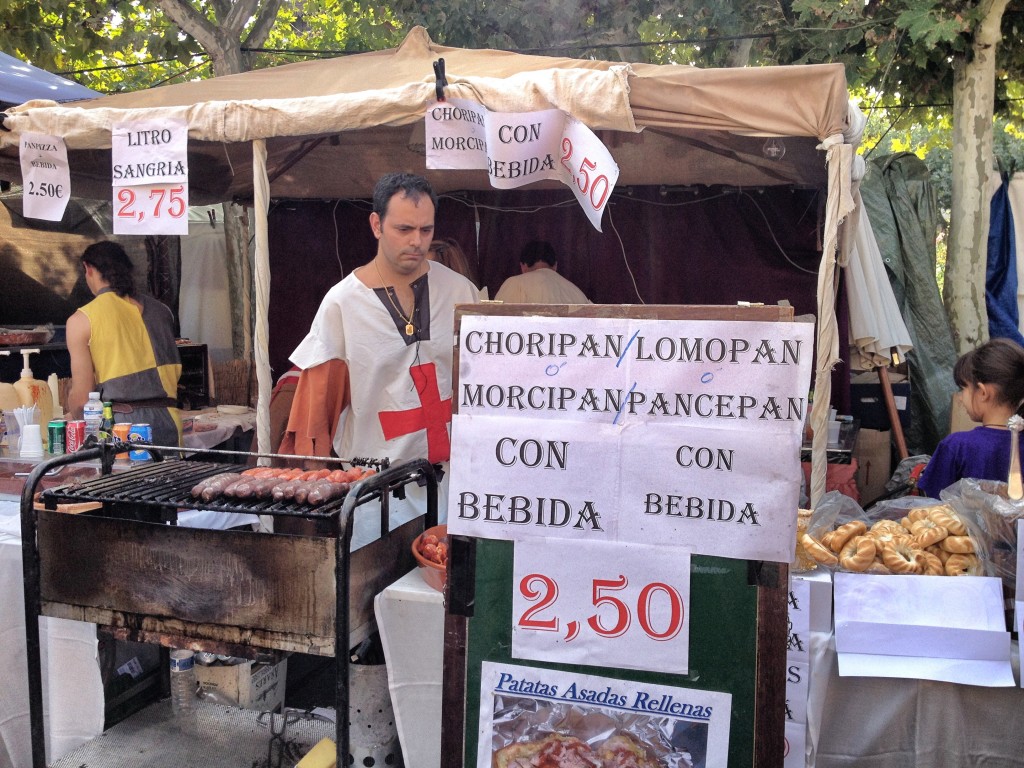 I started my munching with a choripan as I was looking to avoid long lines. This is exactly what’d you’d imagine – chorizo in bread. Simple and delicious. However, as I took my first bite and inhaled a bit, I realized how cheap the bread was as the dry crumbs attacked the back of my throat. My exterior showed tranquil control of the situation but internally I was in a battle not to cough out my entire bite onto the crowded streets in front of me.  A quick sip of my beer saved that scenario. 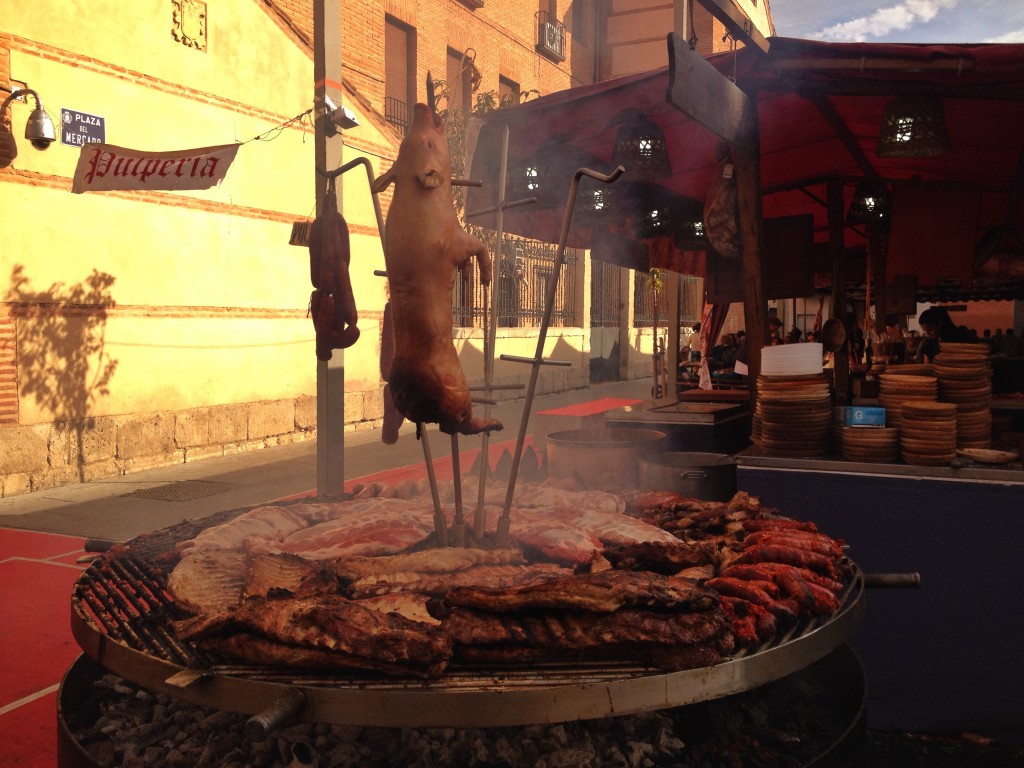 I sat on some steps munching on the rest of my snack without further issues and noticed immediately the mess of litter surrounding each food stand, tables, and chairs. Just as spaniards would dispose of their used napkins on the floor of a tapas bar, so they apparently would at an outdoor festival. I wasn’t exactly put off by this, but rather giggled to myself at their consistency. It’d all be swept away sooner or later anyway I supposed. 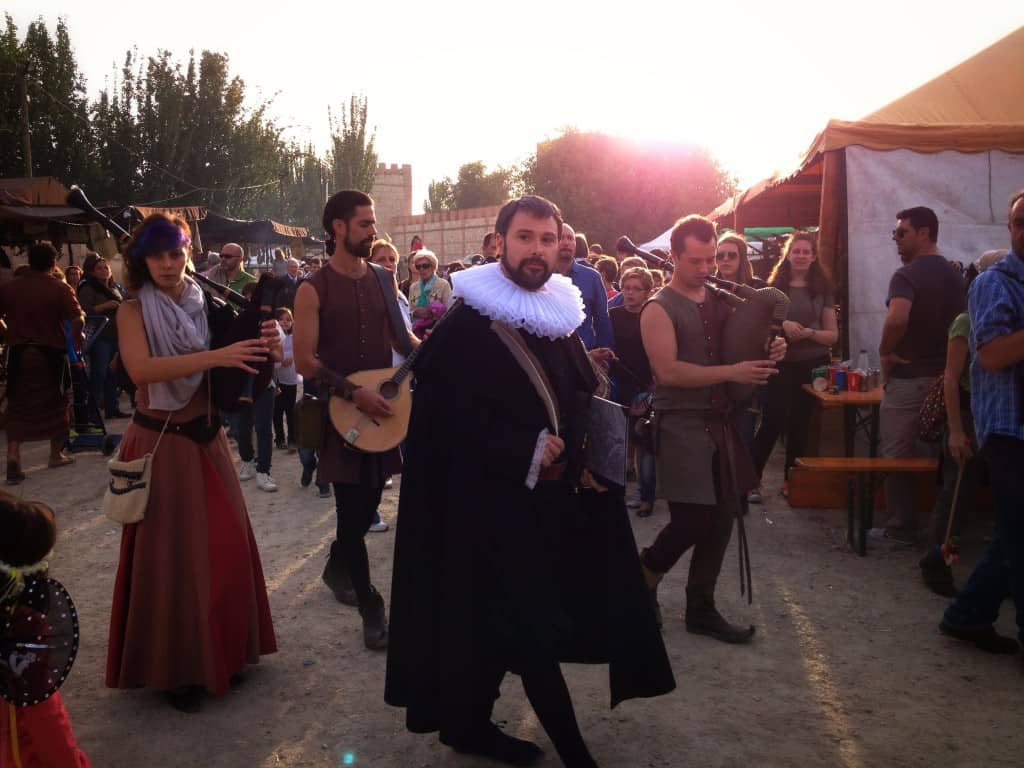 Seeing some delicious looking ribs being grilled up at nearly every restaurant, I decided I had to try them next. So I ordered what I guessed must be ‘ribs' in Spanish but was not entirely sure. I really should have translated that on my phone because what I ended up with was unfortunately another round of choripan. And yes, I did eat it. Twice! Having enough of savories, it was time to try something sweet. This was something I could not screw up as all I had to do was point to the ‘roquillas de Alcalá’, a doughnut like pastry with a sugared glaze. I had never heard of it before but will happily recommend them now.

Watching some performances and meandering the streets, I really enjoyed the atmosphere of this renaissance period event. Above all, I enjoyed not having to take cover at a Spanish festival for once as I did during Batalla del Vino, La Tomatina, and Batalla Naval! 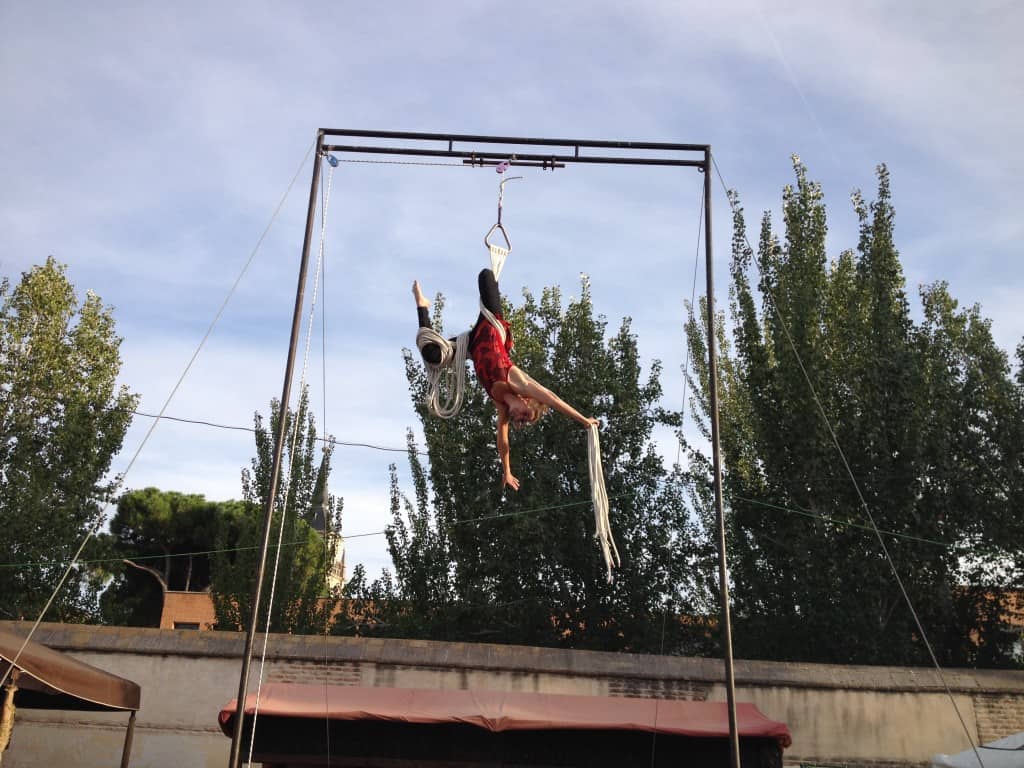 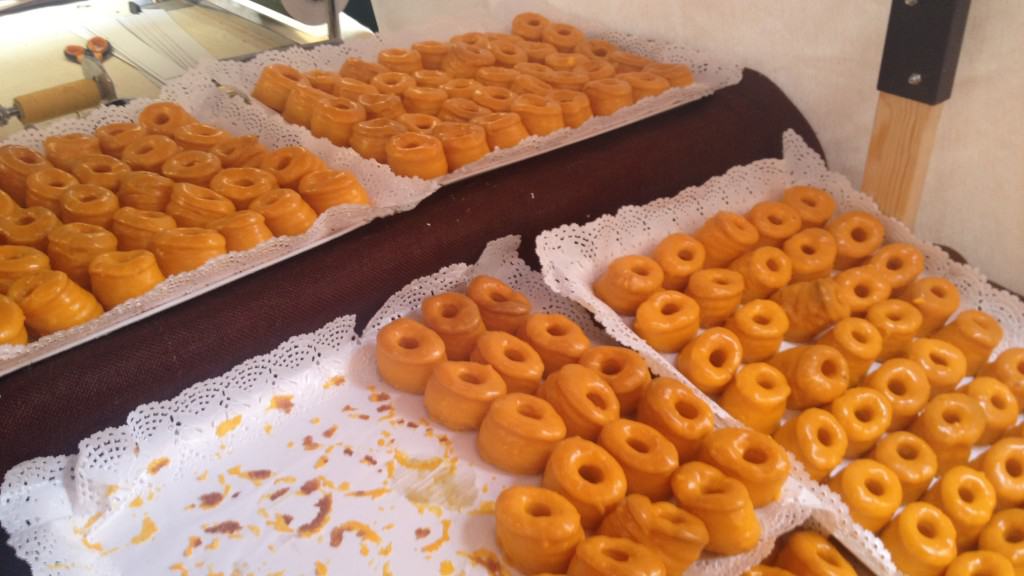 Have you ever participated in Semana Cervantina, visited Alcalá de Henares, or tried the roquillas de Alcalá? It's all a must!