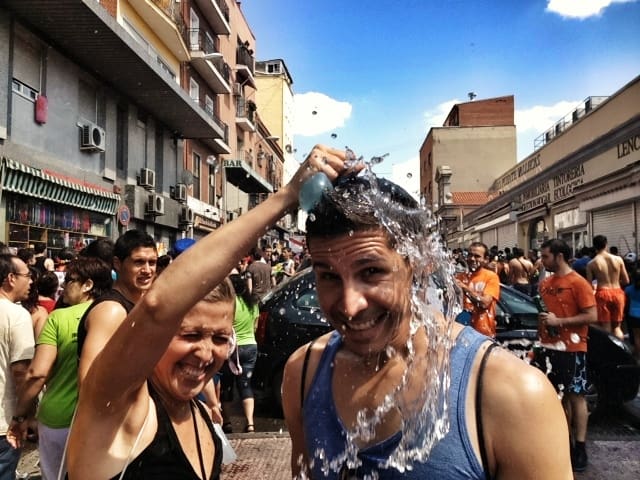 Lounging in the grass by the pool with our friends on the Sunday after Madrid Pride was about the only way we could imagine spending the warm day in the heat of summer. We nursed hangovers from Saturday’s all day celebration, yet somehow managed to continue sipping sangria at the pool. Hair of the dog as they say. I rolled over to face my friend Javi as he spoke, trying not slide down the steep edge of lawn we were on. The pool was so crowded that day that the only spot we managed to find happened to be a 45 degree decline of grass that had us struggling not to slide into the people ahead of us.

“Are you going to Batalla Naval next Sunday?” he asked.

“Of course not,” I thought, “I have no idea what you’re talking about.” 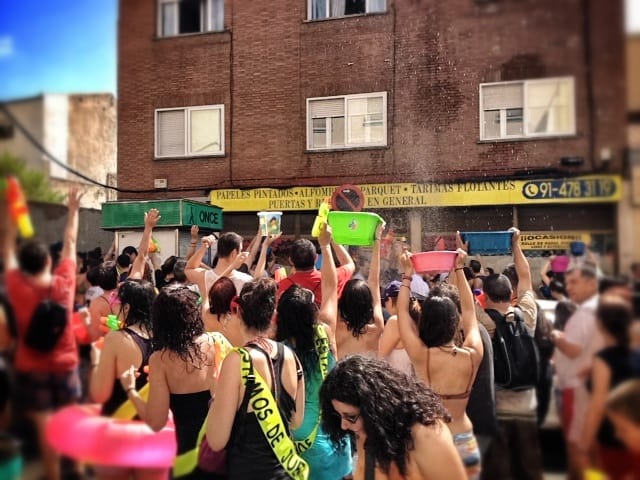 Begging for water to be poured from the windows.

He explained to me that this was an annual tradition in the neighborhood of Vallecas in Madrid. Not surprisingly, the people throw water at each other via buckets, squirt guns, water balloons, basically in any capacity that could be used to hold water and then hurl it at complete strangers. Spaniards continue to solidify for me that they are just plain odd. I asked Javi why Spaniards love to throw things at each other at events, referencing Batalla del Vino, in which they throw wine, La Tomatina, in which they throw tomatoes, and Els Enfarinats, in which they throw flour and eggs at one another. Now he’s telling me there’s an event that’s a giant water fight? Why??

“Because it’s fun,” he answered simply. 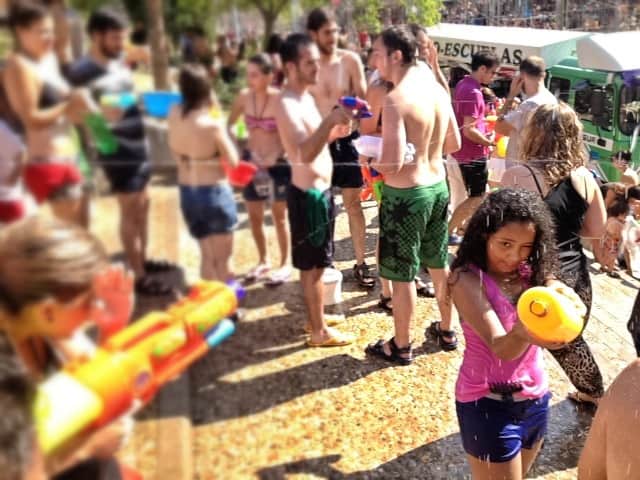 Ok, well, I can’t deny that. It’s just that straightforward. It’s fun. Who doesn’t want to have fun? So the following Sunday we met him and some of his friends in Vallecas for the battle which was an easy fifteen minute train ride from our apartment. Beforehand, he had advised us to swing by a chino (a small, usually asian-owned, mini-store that has just about anything anyone would ever need) to buy water guns and a bucket to catch and refill water. We boarded the train that morning feeling a little awkward being two grown men in our bathing suits with water guns and a random bucket, but there we were. Upon arrival, we quickly found our friends and headed for battle, but not before Javi felt the need to attack us right away with water balloons. Ass. 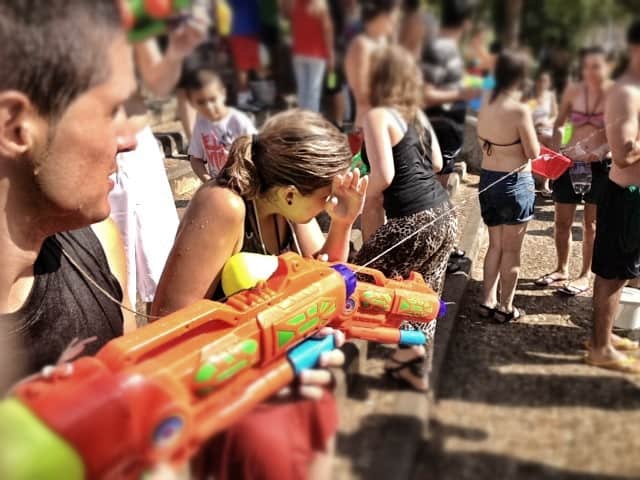 We wandered through the streets of the neighborhood until we found the starting point of what I would describe as a pseudo-parade having only one float. A pirate ship with patrons appropriately pirate-dressed on board lead the way through the streets spraying water at the crowds as they cheered at getting wet. The rest of this pseudo-parade consisted of the participants making their way through the neighborhood spraying water at one another, in the air, and most importantly at anyone not yet wet to whom they’d yell out “secos” (meaning dry) and attack.

This is a neighborhood inspired festival which focuses on… No, depends on the neighbors. They opened their windows to cast their gaze upon the hundreds of people flooding their streets, soaking everything in their path, and shouting in celebration. But what do these presumably irritated spectators do from their second, third, and fourth floor apartments? They shout, smile, and hurl water right back at everyone. They filled pitchers of water and get their hoses to spray the crowd. In turn, the people below would run under the water to catch it in the buckets they brought to either throw at someone else or refill their water guns. Auston and I were obliged to jump in. We hurled ourselves into the groups under the falling water, raised our bucket as high in the air as we could manage to reach the stream, and braved the water as it rushed into our eyes and up our noses. Soon, we realized it wasn’t just a battle, it was war. 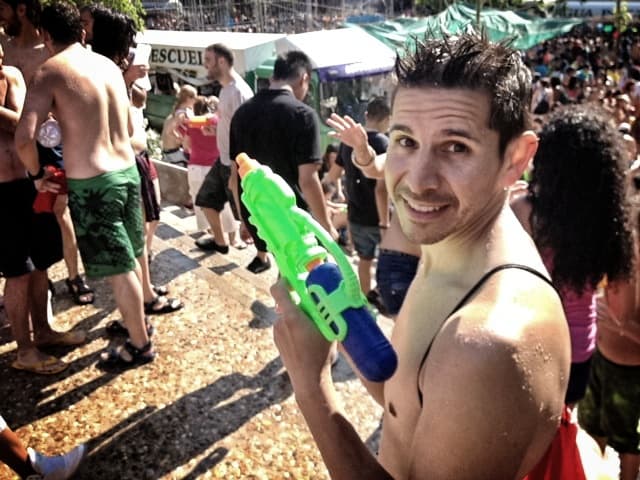 Our friends were more than prepared for the cause. At the end of the parade, there is a water truck for everyone to fill up once again. We refilled our guns and buckets, climbed to the top of the stairs and formed a semi circle to protect our precious resource from the thieves facing drought. Ok – we did allow a cute child to refill from our water, but only once! Then together we’d attack passerby's, especially those who were dry or happened to come upon the festival by mistake. Occasionally, bored with spraying strangers, we’d turn on each other to shake it up. We continued like this until, like those around us, our reserves dried up. Cold from the water, fingers aching from the trigger, and feet sore from the demands of battle, it was finally over. Who won? Well, the water I suppose. I’m still not entirely sure who was on which side. Were there even sides? 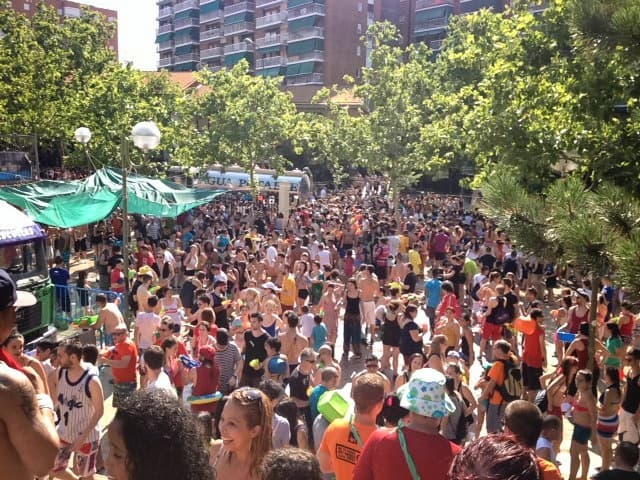 All I know is this: Spaniards like to celebrate. They like to celebrate by throwing things. You’re either throwing with them, or you’re the target of their aim. There’s no thinking required. You just have to pick up your weapon and fire back. 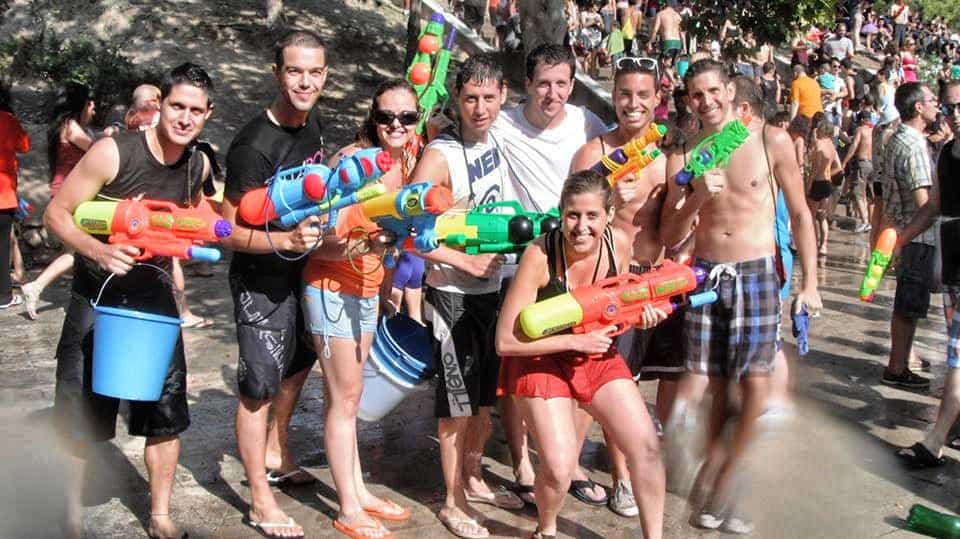 What do you think of Batalla Naval? Would you want to check it out? Have you ever been to any of Spain's other crazy “batallas”?