The sun had not been up even an hour as we made our way up a passably steep hillside on the edges of the town of Haro, Spain, with a box of wine in hand and fully dressed in bleach white clothing that didn’t quite protect from the chill of the early morning. Too soon in the day to be sipping this sweet nectar, one might believe, but not on this day. This wine was not a beverage. It was a weapon. And this hillside was to become the scene of an epic battle that had gone on for years.

As we slowly approach the site of the battle, we notice it has already begun so we prepare our weapons and tense just a little, knowing what is to come. I notice my first opponent, ready to advance upon me. I quickly sidestep to the left as he makes his first strike. He misses as the red ammo splashes to my right. But before I have time to reassess my surroundings, another adversary I hadn’t noticed makes a move at me from behind. This one doesn’t miss. The cold liquid rushes down my back and I arch forward from the shock of it. But just as quickly, I turn around, thrust my arm out toward him and return the attack.

The best part of this battle is that, in the end, nobody really loses and throughout the duration, it’s done with smiles stretched across the face and laughter rising from the belly. The Batalla del Vino, or Battle of the Wine, is a once a year festival held every summer on June 29 in the small northern town of Haro in the region of La Rioja. It is an event we read about a long time before we were able to participate. With much anticipation, we finally could attend this summer – and it didn’t disappoint.

As we began preparing our travel arrangements for the event, we found it quite difficult to find affordable options for accommodations. We easily found a train from Madrid to Logroño, a city just an hour outside of Haro, and a bus to Haro from there. Affordable hostels and hotels, however, were not as easy to come by. We were booking a little last minute, per usual, plus Haro is a small town to begin with and doesn’t offer many options in the way of hostels. We found our best option to be camping with the travel company, Stoke Travel. They had arranged bus travel to the city and the camping arrangements with tents, food, and drinks included. 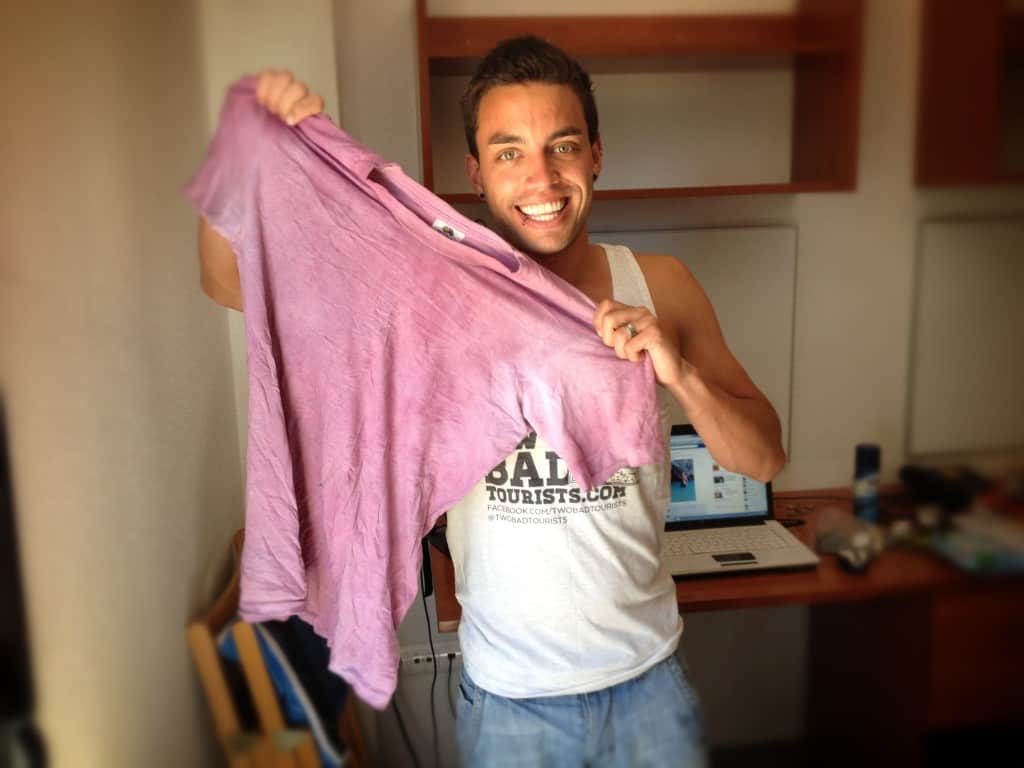 We don’t normally book all inclusive travel deals like this, but in this case it seemed worth it. Plus, we paid a little less since we didn’t need to ride the bus to Haro with them as we were already close by in Logroño. When we arrived at the camp grounds we were greeted by the young and friendly Stoke Travel staff. As the other hundred or so Stoke Travel participants began arriving from Barcelona and San Sebastian via bus, we quickly realized that almost all of them had one thing in common: they were Aussies.

Being Aussie wasn’t the problem obviously, but if you’ve ever been in a hostel when a Busabout or Top Deck bus load of Aussies were staying there, you know you’re in for a crazy time. In our experience, they like to party hard and know how to have a damn good time. That kind of enthusiasm can just suck you in. How can one resist? So at the camp site, the beverages flowed with the conversations as we met people from all around the… well from all around Australia. Then as the night expanded around us, we went into the main square of Haro with the locals where the main celebration was taking place with live music and of course, plenty of wine.

The festivities went late into the night and unfortunately for me and everyone else participating in the next day’s event, the battle started early in the morning. With just a few hours of rest that night (or none at all for an insane few), we deliriously loaded into the buses with our travel companions as we made our way up the mountain side for the battle. Thus it began.

Wine soared through the air as participants were bathed in red. Copious amounts of wine were consumed the “traditional” way as well though surely plenty still lingered in everyone’s veins from the previous night. Undoubtedly it was the most slaphappy battle I have ever witnessed. It all ended as quickly as it had started and you’ll notice by the lack of photos in the post, the only casualty of this war was our camera. Lost in the throes of battle, I was inconsolably distraught to have unwittingly dropped it somewhere as I had long been looking forward to photographing the event. Now, the only mementos we’ll have are our red-stained (formally) white t-shirts. But the random absurdity of this type of event was well worth every loss we incurred during the battle.