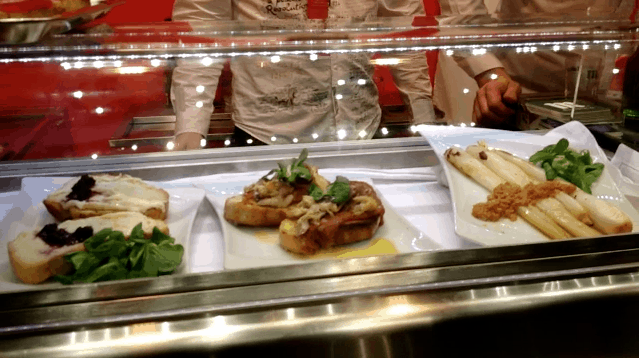 For the ninth year, Feria de la Tapa is an event that once again brings a wide selection of more tapas than you could possibly consume from around Madrid to a single locale for your tantalizing pleasure. Nearly forty restaurants participated this past weekend at Palacio de los Deportes. All tapas were equally priced at 1.50€ with cañas (small beers) reasonably sold for 1€ to accompany the tasty selections and entrance is free. We were exited to spend an evening at the four day event consuming some of the best tapas the city has to offer.

While it’s hard to be disappointed in an event that focuses on one of the best, nay, the single best aspect of traveling: food, we were indeed a little underwhelmed. Madrid is not known for its beer culture whatsoever, so allowing the fact that only one type of beer was served (Mahou) to slide was necessary and expected. The fact that when you order a cerveza at a Spanish bar they don’t ask which kind gives an idea of their beer craftiness. But when in Spain the wine is to be appreciated and the beer is simply tolerated. 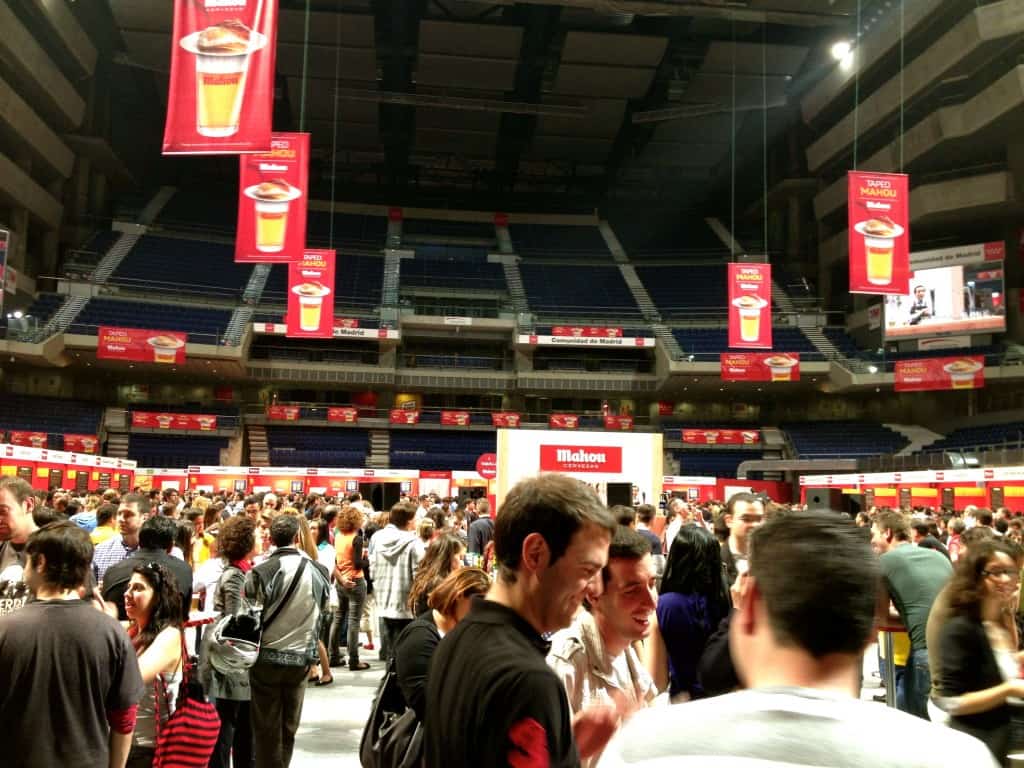 Between the two of us, we enjoyed six tapas at the event. A few examples were a small tostada with sardines and tomato sauce, goat cheese croquetas (fried cheese balls), and a bocadillo de calamares (calamari between bread). Of course, they were all delicious (minus the sardines, but we knew that one was risky) as they featured items from their respective restaurants. Confession, we also stole someone else’s tapas. We were standing at a shared table enjoying our comida when the group opposite our table left. We noted they had left a plate of uneaten tapas and Auston and I glared it down. After waiting the appropriate amount of time to be sure they wouldn’t return for them, we each slyly grabbed a piece and inconspicuously walked away from the scene of the crime.

It was a tacky move, but food tastes extra good when it’s free, right? Well this wasn’t the case for those nasty bites. It was like eating flavorless uncooked dough disguised in a delicious looking fried exterior. Disappointment! There were, however, plenty more payed-for tapas to be had which was the only enjoyable aspect of the event. Its main flaw is not that stolen unclaimed tapas are not worth the effort of your stealthy thief-like moves. It was that it lacked a desirable ambiance in every other way. 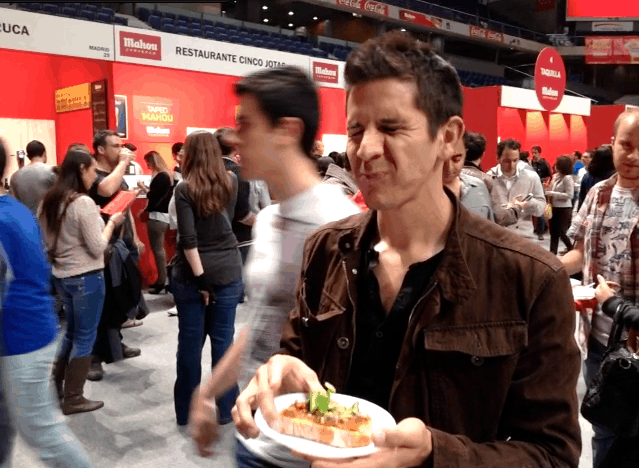 Firstly, it was located inside a bland sports stadium. With all the plazas Madrid has on hand, we could not grasp how this event was not outdoors taking advantage of the immediate another-beautiful-day-in-Madrid atmosphere they provide. On tapa that (haha, get it? Tapa means top in English!), each of the restaurant’s booths were cookie cutter copies of one another. A glass covered selection of their tapas on the counter, a menu of about four options on the side, all against a bright red backdrop. No hint of personality at any stand. It’s like the creativity simply limited to the tapas and nothing else. 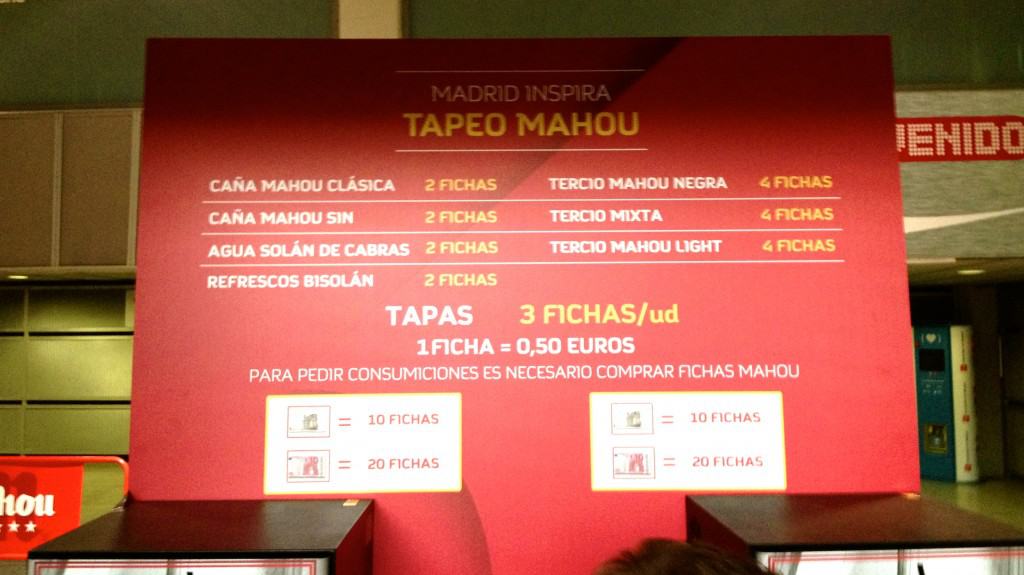 Having lived in Chicago, one of the foodiest of foodie cities, this event just could not compete. I would say that Feria de la Tapa is similar to The Taste of Chicago in format, having restaurants from all around the city offer selections from their menus as well. The  vast difference, other than size (over a million people at The Taste last year vs 40,000 at Feria de la Tapa this year), is that The Taste of Chicago is enjoyed outdoors and the booths are more representative of the restaurants themselves. It’s an aspect I didn’t know I cared for until it was stripped away.

Still, was Feria de la Tapa worth our time? Of course. There were tapas and beer there. Did you not catch that? Is it the best foodie event Madrid has to offer? We have no idea but if so, perhaps we’ll have to consider a visit to Chicago this summer for The Taste which occurs July 10 – 14 this year. Or there’s some other Madrid foodie events to look out for next year like the Gastrofestival Madrid in January/February or the Salón de Gourmets in April. Hopefully we’ll still be around to check them out! We shall see… 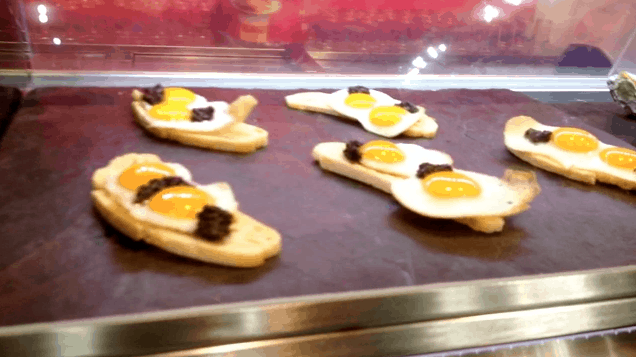 What is you favorite event around the globe that focuses on food? Have you checked out Feria de la Tapa in Madrid? Is the atmosphere in which you enjoy your food as critical as the food quality itself? Let us know in the comments!