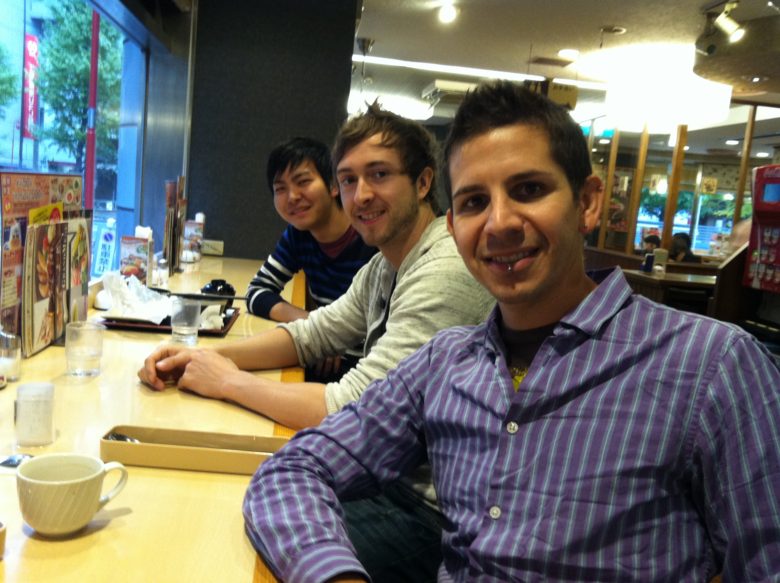 There’s no denying it. We’re new in town and we need friends. Remember the good ol’ days when you made friends simply by turning to the guy next to you in class and making a smart ass comment. Then bam. Friends. Nowadays as an adult, not so simple. Sure you can make friends at work, but if you’re job is at all like Auston and my former careers, that can vary. Most of the people we worked with were significantly older than us, married with kids or grandkids, and paying a mortgage. Sure they’re nice people, but I just don’t see us tossing back beers together at the bar on a Friday night.

The point is, sometimes you have to get creative to make friends out of the school phase. Now that Auston and I work primarily online, it’s even harder. Of course, we love and appreciate all our online friends and the blogger community. But lets face it, we haven’t shared a round at the bar yet and I have a “friend philosophy” if you will… I can’t truly trust a person until we’ve had a drink together. I mean, how do I know who you really are and what your true intentions are until that alcohol has loosened your lips and made you slip a little? Then I can properly judge your character – or lack there of.

So how do you make friends in a new city? Well we’re hoping to find out this year and we’ll let you in on how we plan to do it. Firstly, I have to say that we do know a couple people here in Madrid so we’re not starting out as complete loners. There’s Auston’s cousin, Taylor, who’s studying abroad here and hosted us a few days as I mentioned in our apartment hunting in Madrid post. Then there’s also our friend Miguel who we met when we were in Madrid last summer and later met up with in Lisbon, Portugal as we both had coincidently made weekend plans there. Other than that, we’re friendless. Yet somehow our social calendar is filling up and this is how!

This is an obvious one. If you’ve read our blog at all, you know we’re big fans of Couchsurfing. It’s a great way to get introduced to a new culture and meet new people. However, now that we have a place of our own in Madrid, we most certainly will not be crashing in people’s living rooms! We need a break from that. Now we get to be the hosts! We were happy to find an extra bed in our studio that’s disguised as a sort of ottoman foot rest thing. It’s a small place, but we’re sure a couchsurfer will be happy with it! But of course you don’t have to host or surf to be apart of Couchsurfing. There’s plenty of events going on to meet people. We dove right in our first Friday in Madrid. There was an event of people getting together at a local bar. The turnout was somewhere around 50 people or so. Some were locals, some were travelers, and there's always one or two from countries I’ve never heard but of course I smile politely and nod as if I know exactly where that country is located. 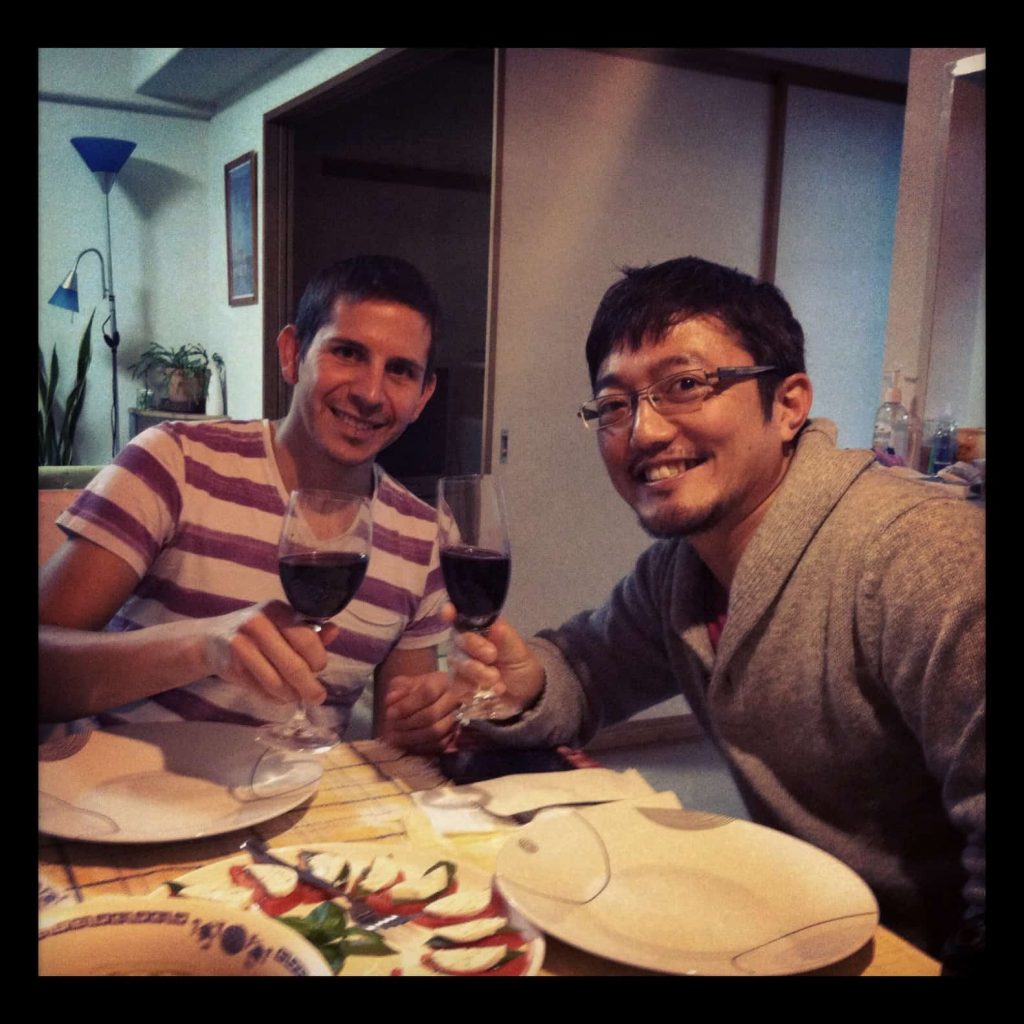 With our Couchsurfing host in Sagamihara, Japan

We learned about this from our Miami Couchsurfing host no less. It’s a great way to find people with common interests and they just plan meet ups to do whatever activity it is that they love. We were very excited to try this for the first time so we found a meetup group for language exchange. It was mostly for people wanting to exchange English for Spanish and vice versa, but all languages were of course welcome. We almost gave up on this event midway not feeling very social, but we stuck it out a while longer and that’s when we met Beatriz. She’s a madrileña (Madrid local) studying English and French. We agreed that practicing a new language in a bar was difficult and decided to meet for coffee later that week. We spent the first half of the conversation helping her with English and she spent the second half of the conversation helping us to not butcher Spanish. We’re now meeting up weekly for the same exchange! 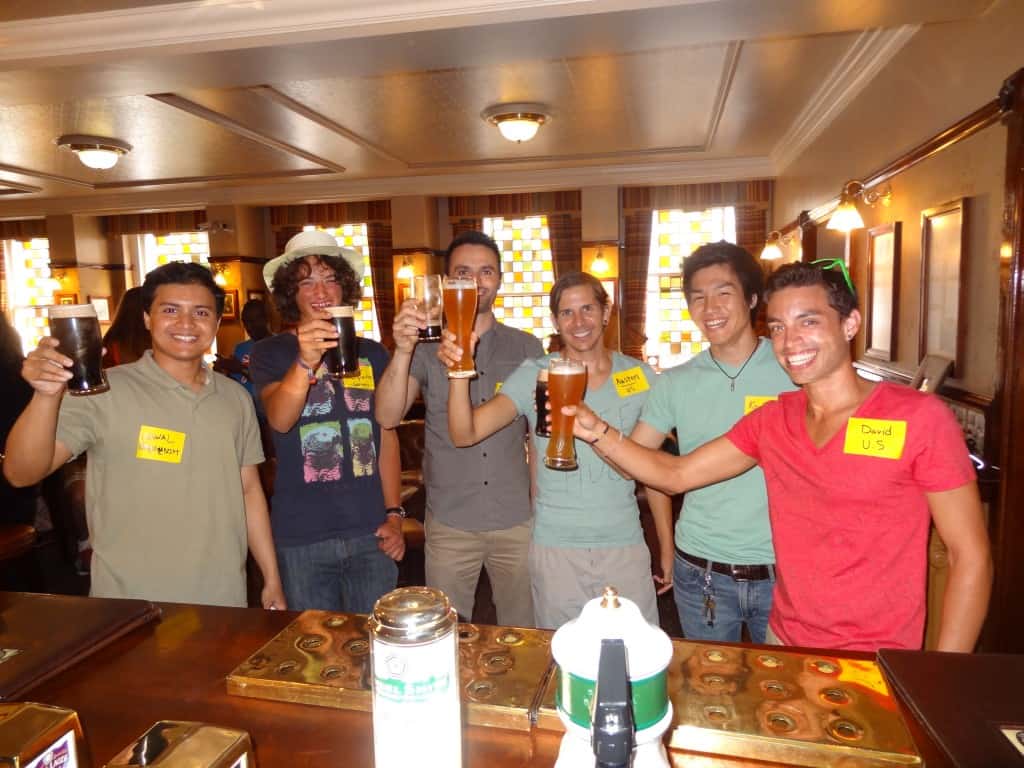 At a Couchsurfing event in London (similar to meetup events!)

We’ve not tried this one out yet, but hoping to eventually. This is a new one we learned about via a fellow travel blogger on Twitter (no clue who now that I’m writing this and trying to recall). Basically, if you’re cooking a meal, you can invite others around your area to join. Or, you can even request a meal from someone. It’s another great way to meet new people. Be it your neighbors or some travelers passing through. Auston and I are debating who should cook if we host a meal. I’m sure people would love my grilled cheese entree with burned popcorn for dessert. He insists his toasted baguette with goat cheese and a honey almond sauce for an appetizer served with a cucumber infused vodka martini and an entree of roasted red pepper stuffed with chicken and topped with brie will be sure to please. I say… debatable.

Well there you have three great online social networks to check out when moving to a new city. It’s never to early to check them out and investigate activities even before the move. In the follow up post to this one we’ll step away from the computer and share some offline tips for meeting new people. 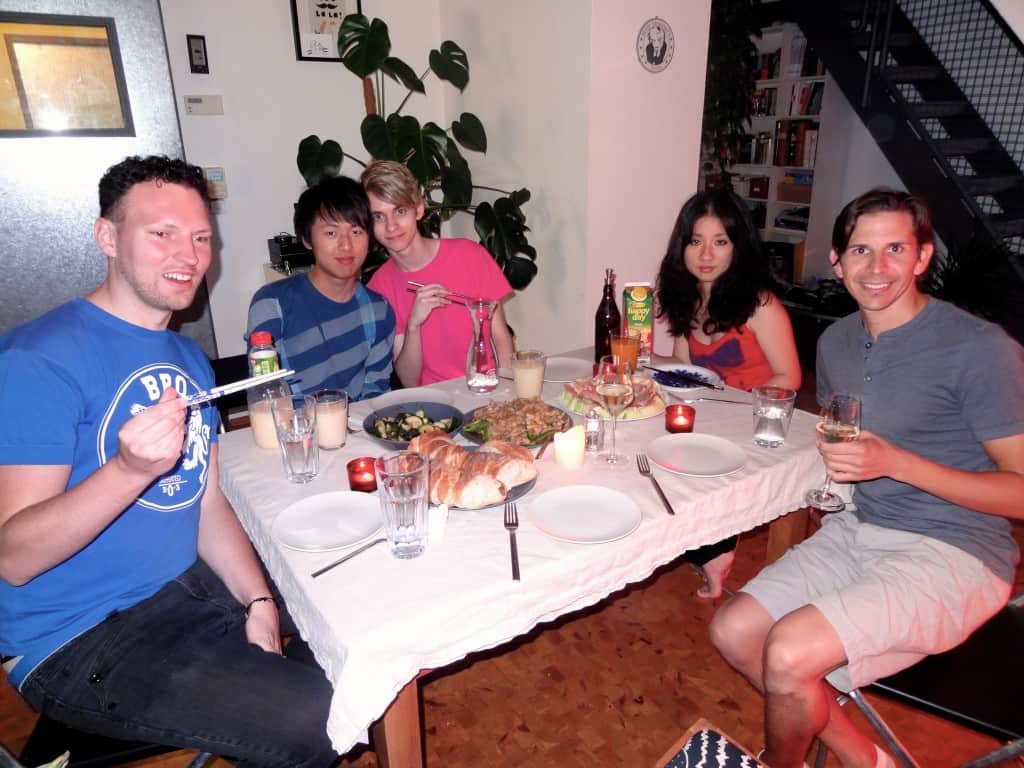 Sharing a meal with our Couchsurfing host in Munich (similar to mealsharing!)