Back in April of 2012 when we were chaotically planning our year long round-the-world trip, we decided ending it in Rio de Janeiro, Brazil for Carnival 2013 would be the best way to celebrate it coming to a close. Knowing that people would be traveling from all over the world to be in Rio for the festivities, we booked our hostel in advance. Way in advance. 11 months in advance. It was very unlike our “bad tourist” habits of doing things last minute. But we knew it'd be expensive if we waited. In fact, prices were already inflated by the time we booked.

But months later, when Carnival was about 2 months away, we were wary of our choice. Mostly because it was really far from the areas we would want to visit. Luckily, Ed had found a brand new hostel that had opened up in Rio and we seized the opportunity to book it. The only catch was that, being brand new, it had no reviews and we knew little about what we were getting into. We did, however, find it to be an excellent hostel. The best part was that due to an error with their prices online, we got it for $20/night each instead of $60/night. For our location (Santa Teresa) during that time of year, it was a steal! 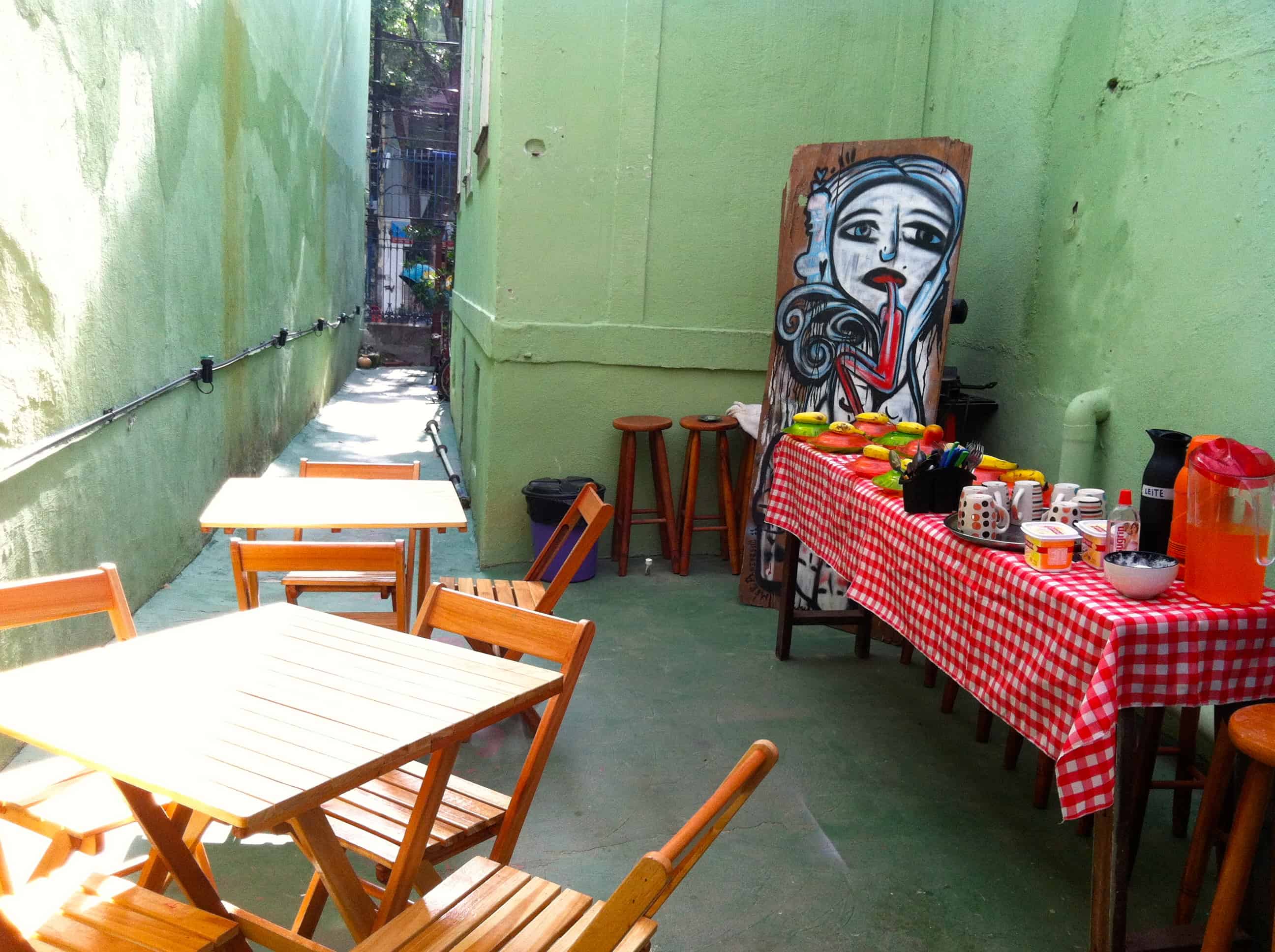 Well we arrived in Rio the Thursday before Carnival after a four hour bus ride from Parati. Carnival goes from Friday to Tuesday. And EVERY day is a party. If you're a prepared traveler, you'll probably get tickets to Sambadrome, the main competitive parade during Rio's Carnival. Tickets can be expensive, but we've heard of some deals people can get depending on their spot in the audience and the day that they go. For us, we contented ourselves to missing that part of the celebration, not wanting to hassle with the fight over tickets.

Besides, there were plenty of street parties going on to distract us. But this was our first time in Rio, so we weren't just there for Carnival. We wanted to check out the sights as well. But before I get to that, let me reminisce about the parties! Like I said, our hostel was located in Santa Teresa, which is about two caipirinha sips away from Lapa, an area known for its monuments and nightlife. When we stepped out the hostel's front door, we were immediately part of the masses of people celebrating in the streets.

Seeing people dressed anywhere from superman to a dragqueen or a stripper, the goal was to be anyone but yourself. Vendors sold food and drinks in the streets and live music performances on an outdoor stage right by the Arcos de Lapa entertained the crowd. For 10 reais (US$5) we enjoyed massive sized caipirinhas and they don't short you on the cachaça (a rum-like liquor made from sugar cane). Our favorite street food that week was the X-Tudo burger. Beef patty, fried egg, cheese, bacon, tomato, lettuce, and mayo. So delicious! Calories be damned. 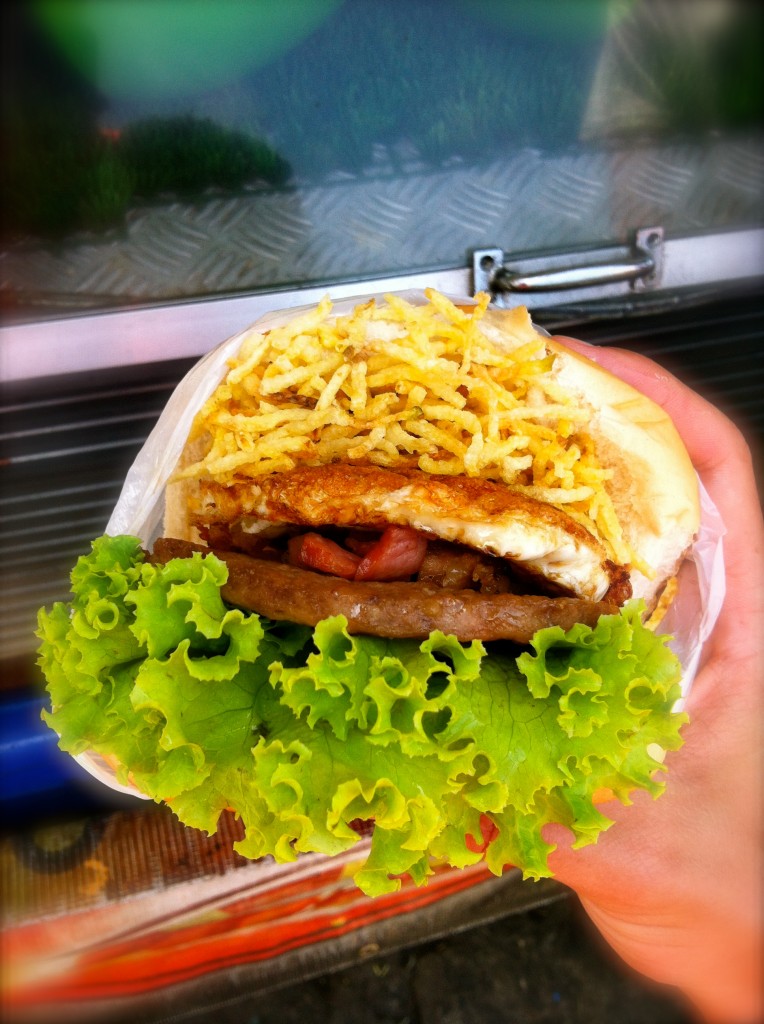 There are quite a few parades during Carnival and we were happy to team up with some friends old and new to check out one of them. Back when we were in Tokyo, we met two British girls at our hostel and discovered we had very similar traveling plans. After Japan, we were all heading to Peru to start our South American trips. We exchanged info and hoped to see each other again.

Well we were all Rio bound for Carnival and it was the perfect time to meet up. They had four other friends from home visiting and we also had our travel buddy, Ed. So it made for a good size group to enjoy the festivities with. We headed to Ipanema for what we referred to as the “gay parade”. It's not exactly like a gay pride parade or anything, but the Banda de Ipanema street parade is known for having a plethora of drag king and queens inevitably drawing in the LGBT crowd. I wish I could say the parade was amazing, but it was so overcrowded and we were stuck at the back of it so we never really saw it. We actually ended up at the beach swimming in our chones and playing clapping games with strangers from every corner of the world.

Of course, we couldn't spend our entire time in Rio at the street parties and parades (although many people do!). We happily took a break from that mess to introduce ourselves to the city. The first sightseeing stop: Escadaria Selaron.

These steps, located in Santa Teresa/Lapa, were designed by Chilean artist Jorge Selaron. The 250 steps are constructed of tiles from all over the world, about 60+ countries in all. It became a fun game for us to try to find tiles portraying the significant cities to us. I couldn’t find Chicago. But I did find a Madrid tile – where we’re moving to next month! Tragically, and I dare say poetically, Jorge Selaron was found dead on the these very steps in January 2013, just one month before we were visiting them. Last I read they didn't yet know what happened the night of his death since it was still so recent. 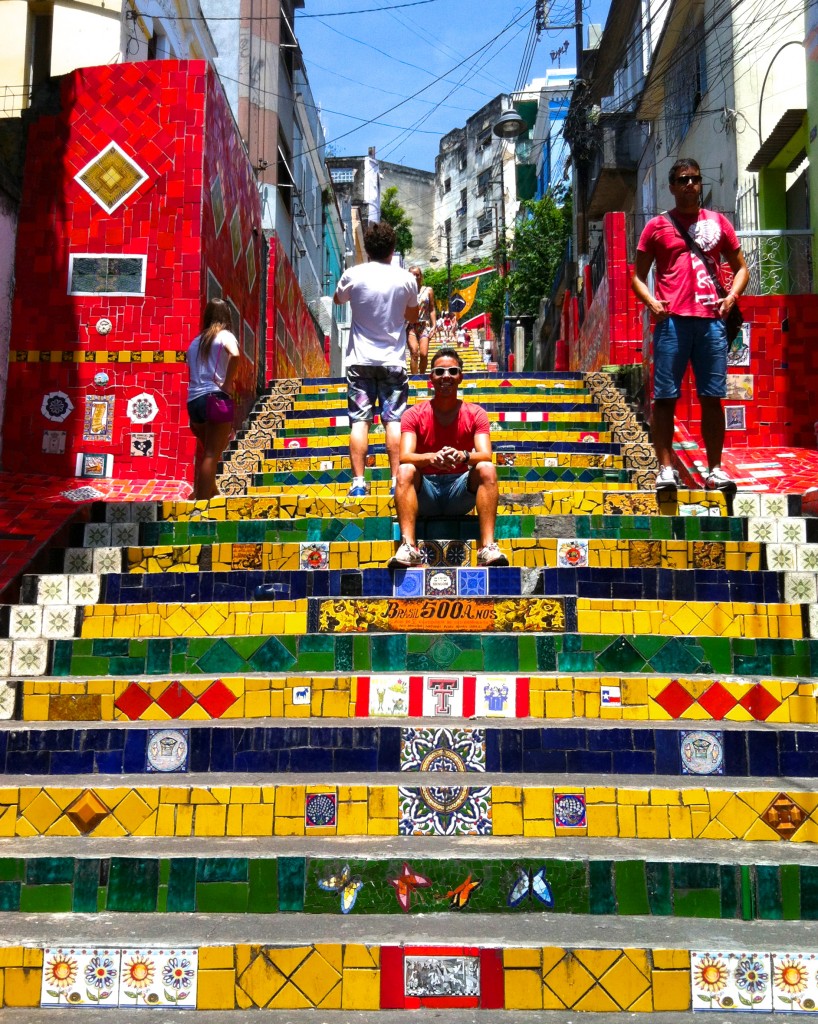 I'm now going to try to subtly move on from that depressing topic to the next way to continue to get to know Rio: experiencing the beaches. Beach days during Carnival are just ridiculous. We headed to Ipanema beach and when we arrived we scanned the tourist filled beach for any nook where we could station ourselves. We ended up crammed between quite a few sun-bathers but were glad to be close to the water.

That is until a particularly high tide came in and soaked us and everyone around, taking with it our belongings. We quickly snatched up the most import things first. I, of course, reached for my caipirinha with the speed like that of a mother saving her baby from the perilous dangers of the water. Sadly, Ed didn’t care for his caipirinha as dutifully as a responsible caregiver should and his went to the fishes. 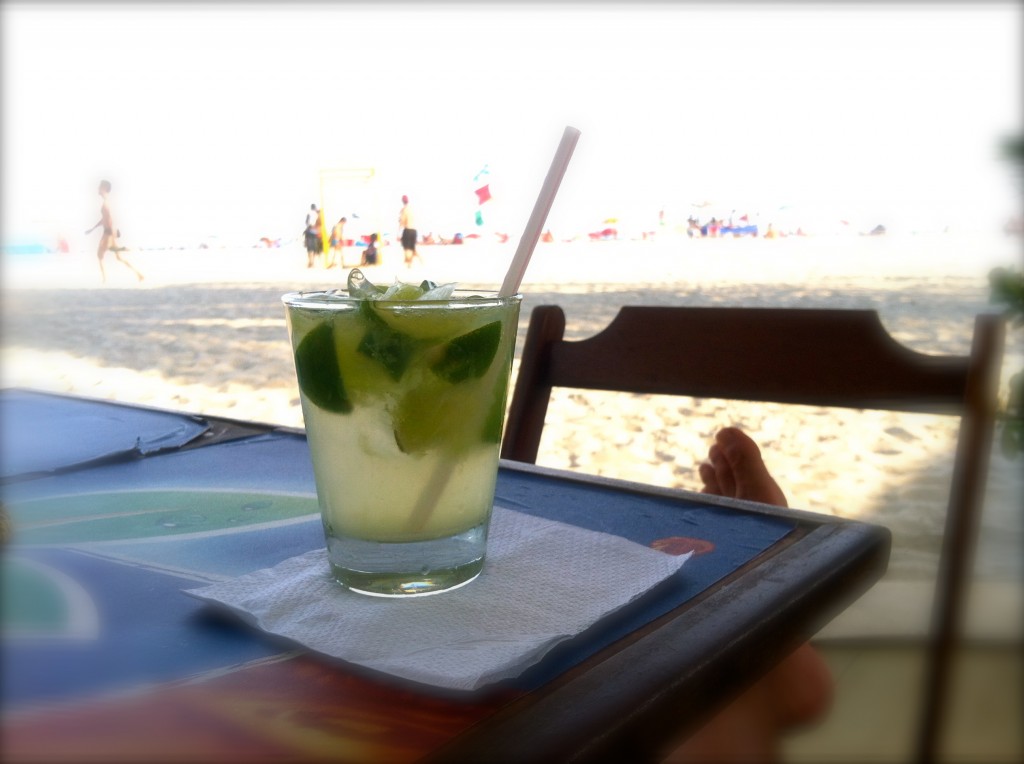 Enjoying a caipirinha at Ipanema beach

Once we were safely resettled elsewhere away from the water, we began evening out our horrendous tank-top tans. Ed and I had it bad. Anytime we were shirtless it looked like we were still wearing a white tank-top. We just could not apply enough sunscreen – that sun was fierce! But even fiercer than the sun was the diligence with which the men at the beach must have worked out before Carnival. 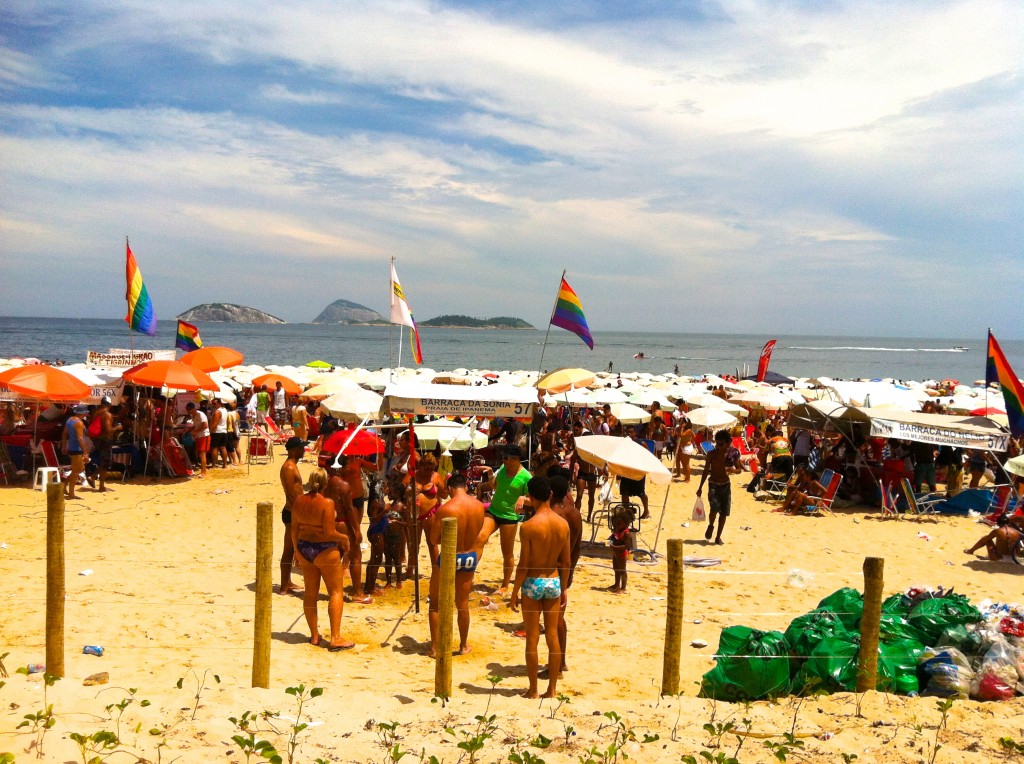 Auston, Ed, I looked down at our bodies with feelings of pity and embarrassment as men with muscles I was sure my body didn’t even possess pranced around in skimpy speedos. The women, on the other hand, were a different story. I don’t believe I’m saying this because I was drooling over all the men (though I certainly was). In truth, I have almost always found the women in the many countries we visited to be generally better looking than their counterparts. India, Mexico, Guatemala, Japan, and Chile spring to mind. But this (probably baseless) opinion did not hold for Brazil. Especially at the beach! Not sure why that was.

Well if anyone would be there to listen to our self-image woes it's Jesus. The next day is was time for a visit to Cristo Redentor (Christ the Redeemer). Getting there from our hostel was a simple matter of hopping on the correct bus. Upon arriving, the train up to the top of the mountain was a ridiculous wait so we took one of the many shared van rides available for about the same cost as the train. The van took us to the ticket counter not quite at the top where we found ourselves waiting in a long line. Then we were waiting in another long line after that to take another shared van the remaining distance to the actual mountain top. From there we could finally enter to see the statue. 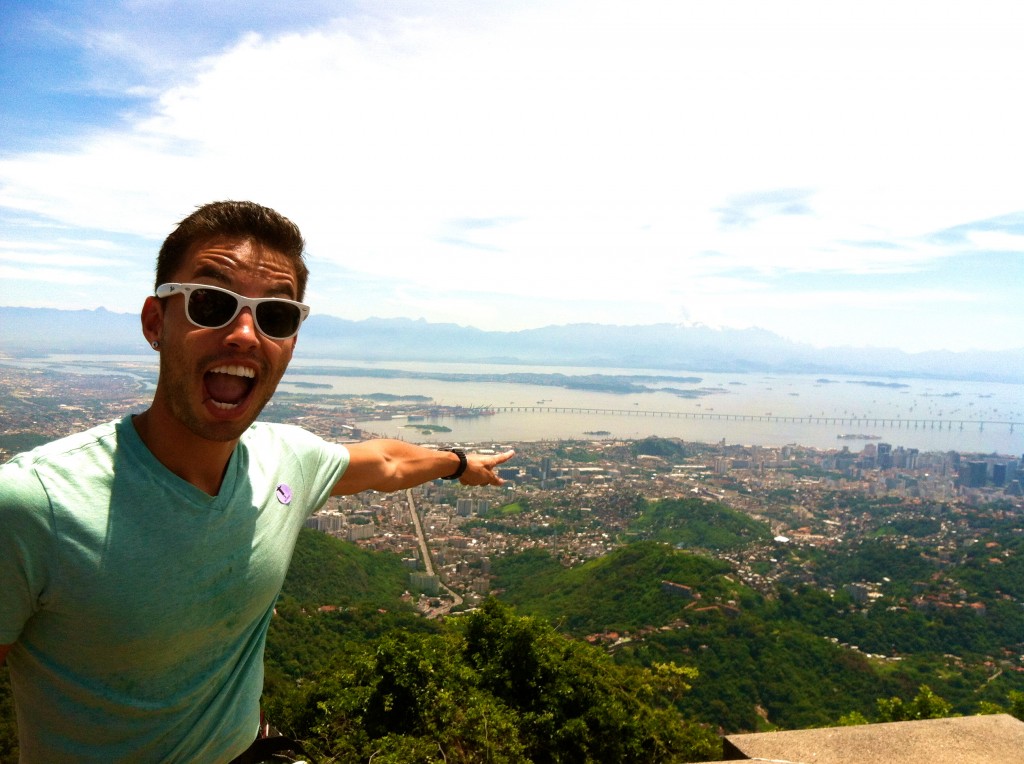 The statue is known to be the largest art deco statue in the world as well as the 5th largest Jesus statue – two facts we weren't exactly ‘wowed' by. Once we were actually standing face to face with the giant Son of God, we decided he was in fact not so giant. More like a medium-sized Jesus. We really thought it'd be much larger since it can be seen from so far away in the city. Add tons of tourists packed on the small deck in front of it all taking matching pictures with out-stretched arms plus the burning heat and you can see why it wasn't our favorite afternoon in Rio. However, the view from the top of the mountain is what really made it all worth it. It's a spectacular spot to get a look at the sprawling city below. 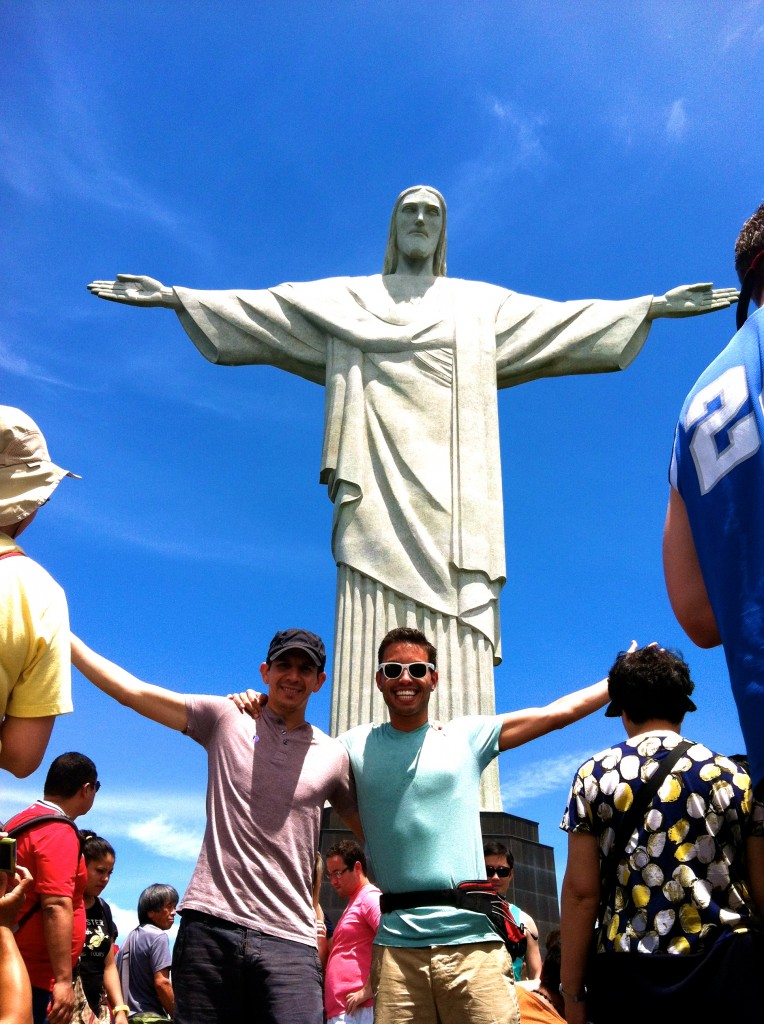 That evening it was time for a repeat of Saturday's parade. They were actually doing the same one again and since we didn't see much of it last time we wanted to make up for it. This time we got festive. Everyone dresses wacky during Carnival and there were plenty of cheap accessories to purchase from local shops. Some bunny ears, tiny hats, leis, and neon gloves helped us to fit in. We danced to the music of the band and met people from all over throughout the night. It was a great way to end the last day of the Carnival celebrations.

Come Wednesday, Rio was D-esolate. E-mpty. A-bandoned. D-eserted. D-E-A-D! People ditched that city quickly, probably in hopes that they could also ditch the shame of what they'd done over the past few days. We were there for two more days after Carnival though and it really felt like a scene out of the ‘The Walking Dead' as we strolled the streets. Life had ceased and only waste remained. It was a totally different view of Rio. We were glad we stayed though. Eventually shops and restaurants that had been closed during the long weekend opened back up and we got to see what life was like on a normal day.

This was an opportune time to fit in a favela tour before we left the city. Favelas came about when squatters began building shanties or shacks at the edge of the city, eventually forming their own communities and even gaining electricity and water. We booked our tour online and were pleased with our van ride and guide. We were driven to two different favelas in addition to being guided on foot through some of their winding streets. It actually reminded us of the zig-zagging alleyways of Marrakech where you could so easily be lost. And we would have been lost were it not for our knowledgeable tour guide to get us around. 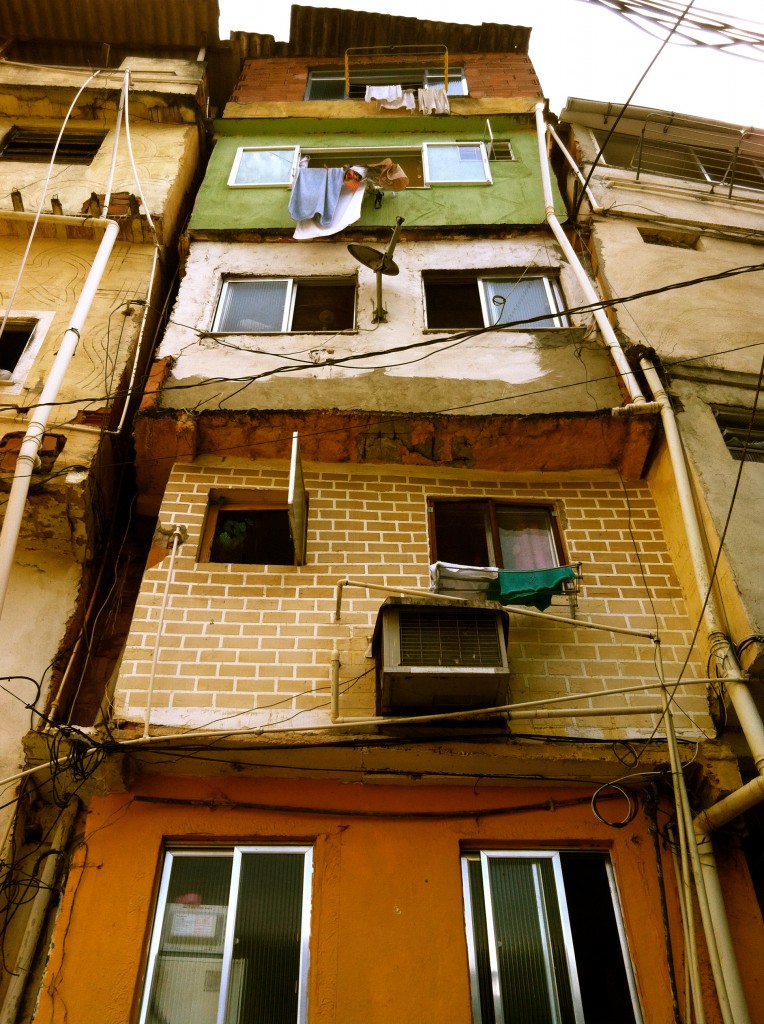 Our first favela stop was in Vila Canoas where we saw “Para Ti”, the school that's financially supported from the tours. Then we visited Rocinha, the largest (and most overwhelming) favela in Rio. The tour took us up the steep hillside of the favela where we had a fantastic view of the colorful homes decorating Rocinha below. It was an interesting insight into the favelas and I'm sure we only got a glimpse of what life is really like there. 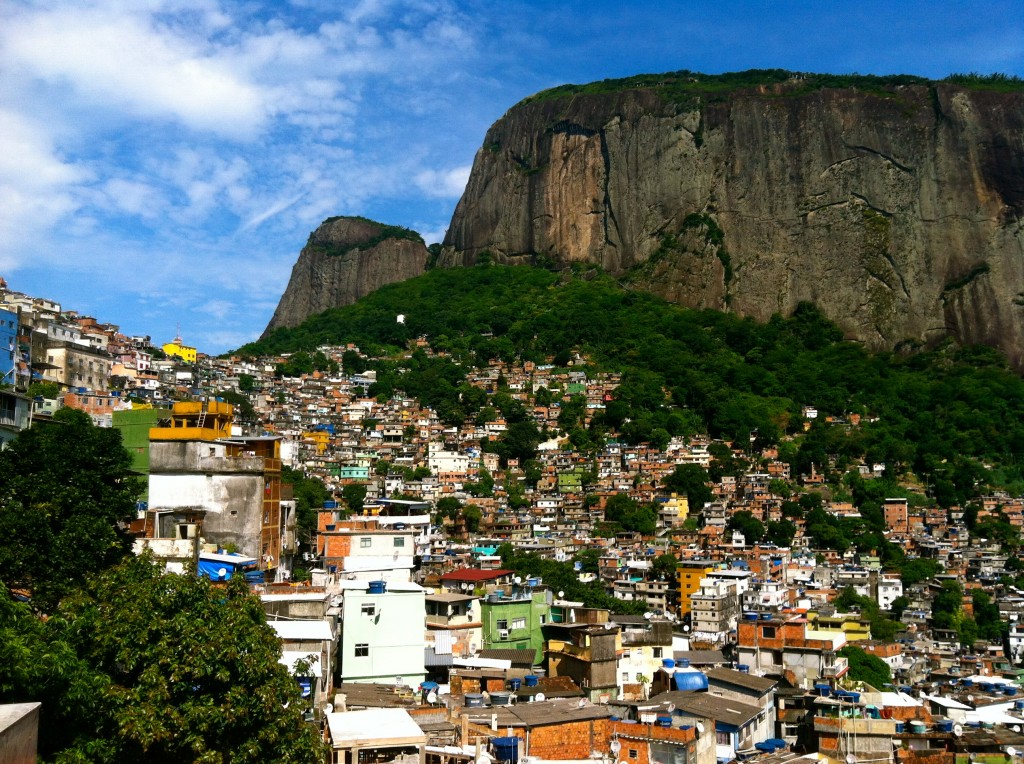 So that ended our time in Rio. The next day we were out of the city. Leaving the country. Saying goodbye to the continent. Heading back to the United States! Yikes. We were so ready/not ready. But at least we still had a relaxing week in Miami to look forward too after all the sightseeing and crazy street parties of Rio de Janeiro's Carnival 2013!