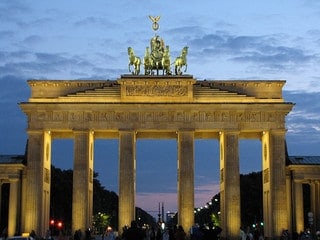 By the time we made it to Berlin in Germany, we were so checked out of traveling that we managed to avoid sightseeing almost entirely. We had zigzagged our way around Europe for weeks and needed a couple days of respite. This has led us to feel the need to redo Berlin one day and hopefully we'll have the chance when we return to Europe this year. Patrick from BeatTheBrochure has offered us the perfect itinerary to do Berlin right the second time around!

If you only have two days to spend in Berlin and money is tight then BeatTheBrochure has a one-stop guide of what to see and do.  Sometimes you simply need to get away from it all.  And when one weekend is all you have, you will want to pack in as much as possible.

Being the capital city of Germany, Berlin is steeped in history, architecture and culture.  Its diverse position in world political events and wars has made it a very unique city indeed – something you can’t fail to notice when wondering the stunning streets of this wonderful capital.

Make sure you stop off at the Fernsehturm in Mitte.  This is the tallest structure in Germany and one of the tallest structures in the EU standing at an impressive 1,207 ft.  This magnificent TV tower was constructed in 1965 and its observation floor will give you the most amazing views across Berlin. It costs an affordable 12€  (~US$16) and if you purchase the early bird ticket for a 9am arrival you can ensure entry without a wait time – ideal for a short time frame in Berlin.

The Brandenburg Gate is extremely iconic representing Berlin's separation as well as its union. This stunning landmark was built in the late 18th century and will bring you into the Unter den Linden which is known for its breath-taking boulevard of linden trees. It's one of the top free sights to visit in Berlin.

No trip to Berlin would be complete without a visit to the East Side Gallery.  An open-air exhibition that is painted on the last remaining parts of the Berlin Wall.  It's free to visit and really is worth a look. Being outdoors, the gallery is accessible any time so it won't cause time contraints for a limited itinerary.

Berlin has a rich urban culture and this is highlighted in many of its trendier areas including Prenzlauer Berg, a district known for its boutiques, galleries, restaurants and bars, as well as Kreuzberg and Friedrichshain districts where you can find edgy street art in a bohemian atmosphere.  As you wander around the streets of Berlin you can’t fail to notice the amazing colours and designs of its graffiti culture.

It also boasts incredible nightlife and is known for having some of the most diverse music scenes.  If you are only in Berlin for two days then make sure you check out its club scene.  Clubs here don’t have fixed closing times on weekends so you may well find yourself partying till the early hours of the morning – many are hidden away and those that are will not charge as high an entrance fee! The districts known for their clubs are Mitte, Prenzlauer Berg, Friedrichshain, and Kreuzberg.

If you prefer music of a more calming influence then make sure you head to one of the 50 or so theatres in Berlin.  With three main opera houses (Staatsoper Unter den Linden, Deutsche Oper, and Komische Oper) you will be certain to find something to suit your taste. Tickets can typically range from 80€ – 200€ making this a pricier experience. However, there are always cheaper (though less desirable) seats to be had. In addition, if you're under 30 years old there's the Classic Card valid once a year for 15€ which allows you to buy tickets for just 10€ at any opera house.

Don’t forget to sample the local delights of the currywurst, often sold from local street vendors.  After a busy day and night it will be the perfect way to re-energise you for more sightseeing. Other popular dishes include königsberger klopse (dumplings of beef and capers), kartoffelsuppe (potato soup), kartoffelpuffer (potato pancakes), and armer ritter (German version of French toast).