We split up from Auston's family in France to go celebrate Gay Pride in Madrid, as the rest of his family continued on to Paris and London. We arrived in Madrid just in time for Orgullo Madrid, their gay pride festival. We were warned that madrileños have a later schedule than most. But this place takes the cake. Nightlife doesn't just go until the wee hours of dawn. It straight up passes into the morning. I assume the weekend we were there had to be on overload considering that there was not only Orgullo Madrid, but also the 2012 European Football Championship game of Spain versus Italy.

It was an absolute whirlwind of a weekend and we were happy to do some relaxed sightseeing the days after. We opted out of the traditional hop on/hop off tour bus because it was fairly pricey and instead decided to download a more wallet-friendly Madrid walking tour app. We walked around various points in the city that the app suggested and it had an audio recording about its history. It was so… boring actually. We stopped fairly early and wished we were on a tour bus. :-( But it was worth a shot I guess!

Madrid is an amazing city and I am seriously considering moving my entire family here and settling down. Or possibly ditching them and going solo. I'm still working out the details.

Photos here. Not a lot really because we got caught up in day to day life in Madrid and I don't regret it! 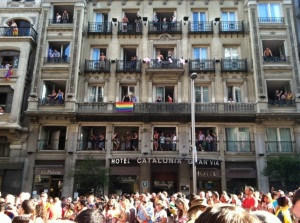 Waiting for the parade to start

The festival and parade in Madrid in the largest Gay Pride in Spain and is well worth a visit!

19 Comments on “Gay Pride in Madrid”